Event Quests in Monster Hunter Rise: Sunbreak task you with hunting certain monsters under various special conditions. In the Event Quest Punches and Pincers, you'll have to fight Master Rank Rajang, Daimyo Hermitaur, and Shogun Ceanataur in the arena.

Fighting all three of these monsters at the same time can be difficult. Let's take a look at each of these monsters' strengths and weaknesses, the best equipment to use for fighting them, and some tips for completing this quest. 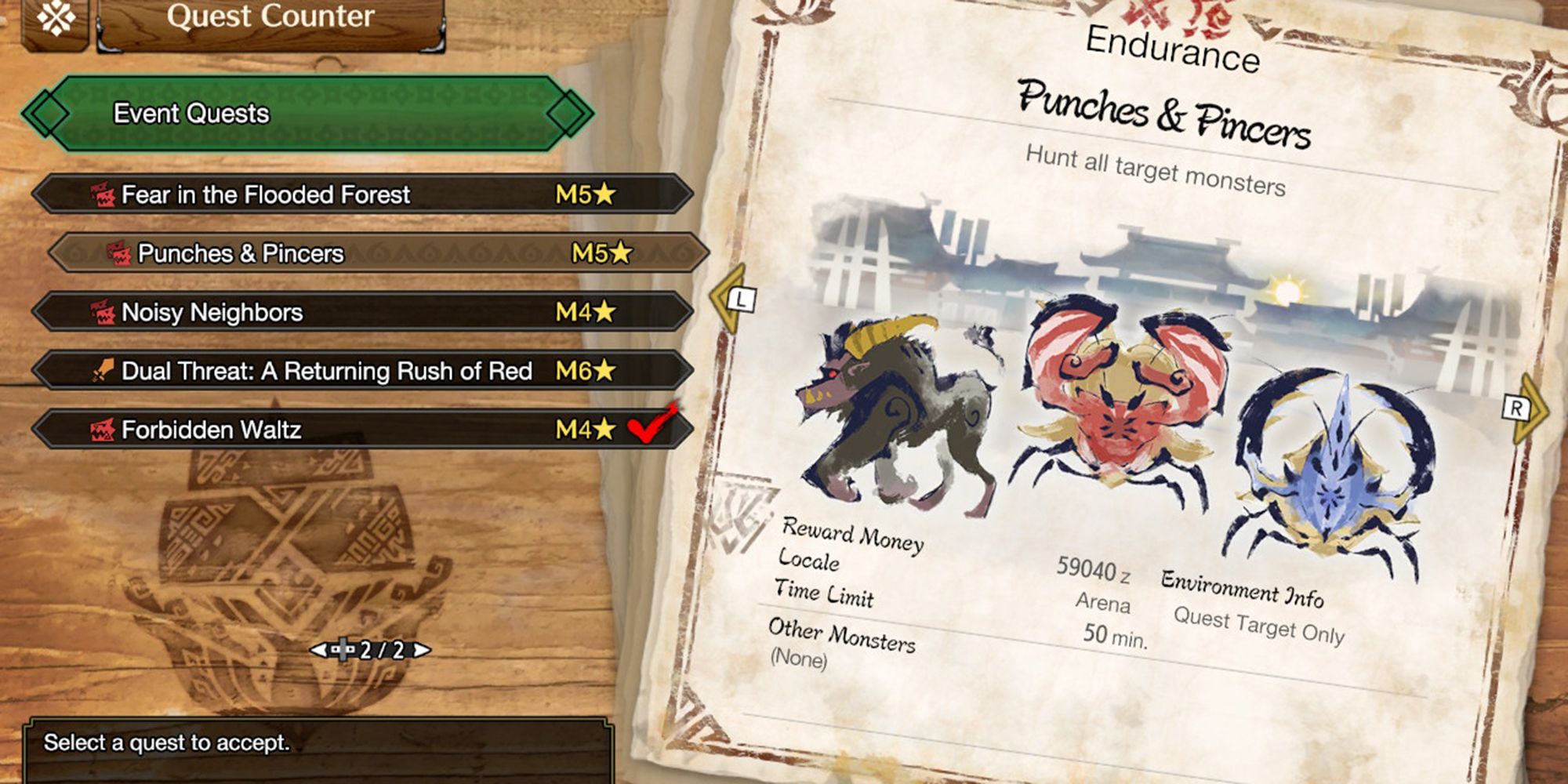 Rajang, Daimyo Hermitaur, and Shogun Ceanataur are all difficult monsters on their own, but can be overwhelming when combined. To clear this Event Quest, you'll need to hunt all three of them in the arena.

At the start, you will face Rajang and Daimyo Hermitaur. The Shogun Ceanataur will appear after one of these monsters has been slain.

Best Equipment To Use

Setting up your equipment for this quest can be difficult; Daimyo Hermiataur and Shogun Ceanataur share the same elemental weaknesses, but Rajang does not. Because of this, we recommend bringing a physical weapon with no elemental damage. This will give you consistent damage to each monster.

Alternatively, if you have the most trouble with Rajang, for example, you may want to bring an Ice weapon to easily deal with it first. Remember that you can swap weapons mid-quest from the tent any time you want.

For armor, your best bet will be armor with high overall defense, or high Thunder defense. The two crab monsters only infrequently use a Water element attack, but Rajang's Thunder attacks can deal extremely high damage, especially if your armor has negative Thunder resistance.

Because of Shogun Ceanataur's use of the Bleed status effect, we recommend bringing Sushifish or Well-done Steak to remove the Bleed quickly. If left unchecked, this status effect can deal a lot of damage, making it more difficult to keep your health high to protect against Rajang's attacks.

Tips For Completing Punches And Pincers

In the arena, you can activate the switch in the center of the area to raise the fence, dividing the arena into two. If timed correctly, you can separate the two current monsters from each other, making fighting them one-on-one much easier. Take advantage of the fence to make this quest go more smoothly.

The fence will drop after a while; be sure to reactivate it if you want to keep taking advantage of it. 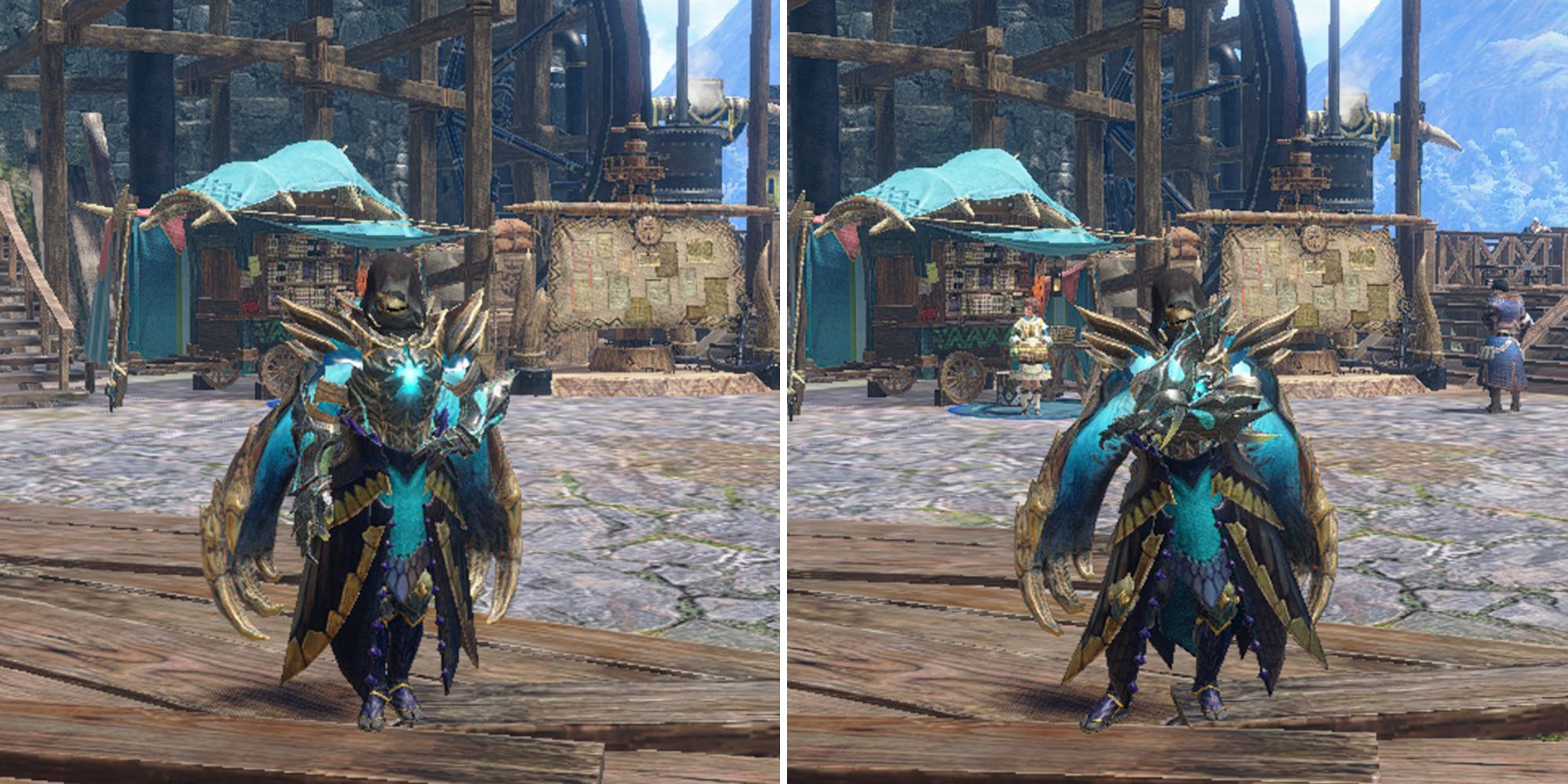 Upon completing the Punches and Pincers quest, you will gain the Royal Order Pose Set, containing two poses inspired by certain characters in Elgado. Poses can be used at any time by selecting the Pose Set option from the main menu, or while using the Cohoot Camera.

In addition to these poses, you will also obtain normal MR rewards for hunting Rajang, Daimyo Hermitaur, and Shogun Ceanataur.