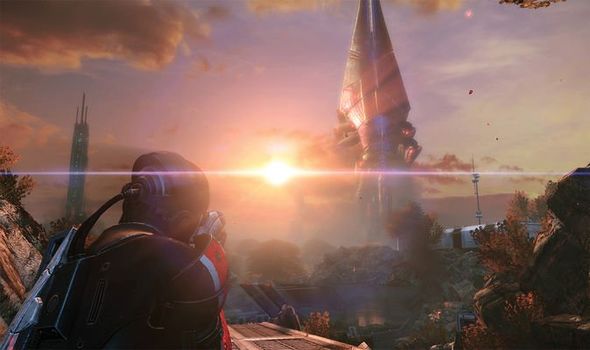 The story of Shepherd is about to be retold in the best way possible for gamers hungry to battle the Reapers once again.

Offering last-gen improvements on PS4, Xbox One, PC and next-gen consoles, fans won’t have to wait long to put Mass Effect through its paces.

Fans will be able to choose which game or improvements will make it worth playing through again.

For many, the improvements made to the original Mass Effect game will make it easier to play through the trilogy again.

Mass Effect Legendary Edition will include single-player base content and DLC from Mass Effect, Mass Effect 2, and Mass Effect 3, plus promo weapons, armours, and packs – all remastered and optimized for 4k Ultra HD.

For those who have already pre-ordered the Legendary Edition, the trilogy can be preloaded today ahead of the final release date.

WHAT IS THE MASS EFFECT LEGENDARY EDITION RELEASE TIME?

Developers BioWare have not shared a full schedule yet, but based on what has been revealed on different digital stores, the Mass Effect Legendary Edition release time has been set for 0:01 am BST, on Friday, May 14.

This will be the release time on consoles, with the Steam launch possibly delayed until closer to 4pm BST.

Meanwhile, the Origin listing suggests that the Legendary Edition will be available on May 14 at 10am CDT, which would be 4pm BST.

Another listing suggests that Mass Effect Legendary Edition could be available by 6pm BST on May 13, but that seems unlikely.

New reports suggest that Mass Effect Legendary Edition will require around 100GB on certain consoles. Meanwhile, the official Steam page lists the install size as around 120 GB at the lowest settings.

That’s a huge step up from the original series, which makes sense when you look at all the notable changes that have been made.

A message from EA explains: “Our goal from the onset was to improve and enhance the visuals while staying true to the original aesthetics of the trilogy that have become so iconic and genre-defining over the past decade.

“A remaster rather than remake allowed us to build upon the original assets in a way that resembles the polishing phase in a normal development cycle, while also being able to utilize the advantages of much more modern hardware and software.

“For those interested in the technical aspects of game development, it’s probably no surprise to hear that changing almost any asset or system can (and will) break something else. When a game is in its final state, it generally resembles a house of cards.

“The simple process of blowing the dust off, let alone implementing foundational changes like updating the version of the engine, will undoubtedly cause unexpected issues. Remastering a single game is a deceivingly complex process, so creating a proper plan for how best to mitigate risk while reopening three games to full development was foremost on our minds.”

More news regarding this week’s Mass Effect Legendary Edition release is expected to be shared by developers BioWare before the final launch date.