It’s the final day of Magic: The Gathering’s Double Masters 2022 preview season. We’ve now seen all the expensive, fancy things this premium set has to offer, and it’s looking like one of the most exciting sets we’ll see this year.

It combines power with hidden treasures that have been begging for reprints for decades, alongside great new alternate art and a three-colour draft format that looks fun and robust. People weren’t expecting much from Double Masters 2022 when it was revealed, but Wizards has definitely proven us wrong.

On day eight of spoilers, we’ve had the white enchantment everyone was hoping for, the first reprint of a card released 23 years ago, and a huge shakeup to the Pauper metagame. Here is everything revealed on the final day of Double Masters 2022’s preview season. 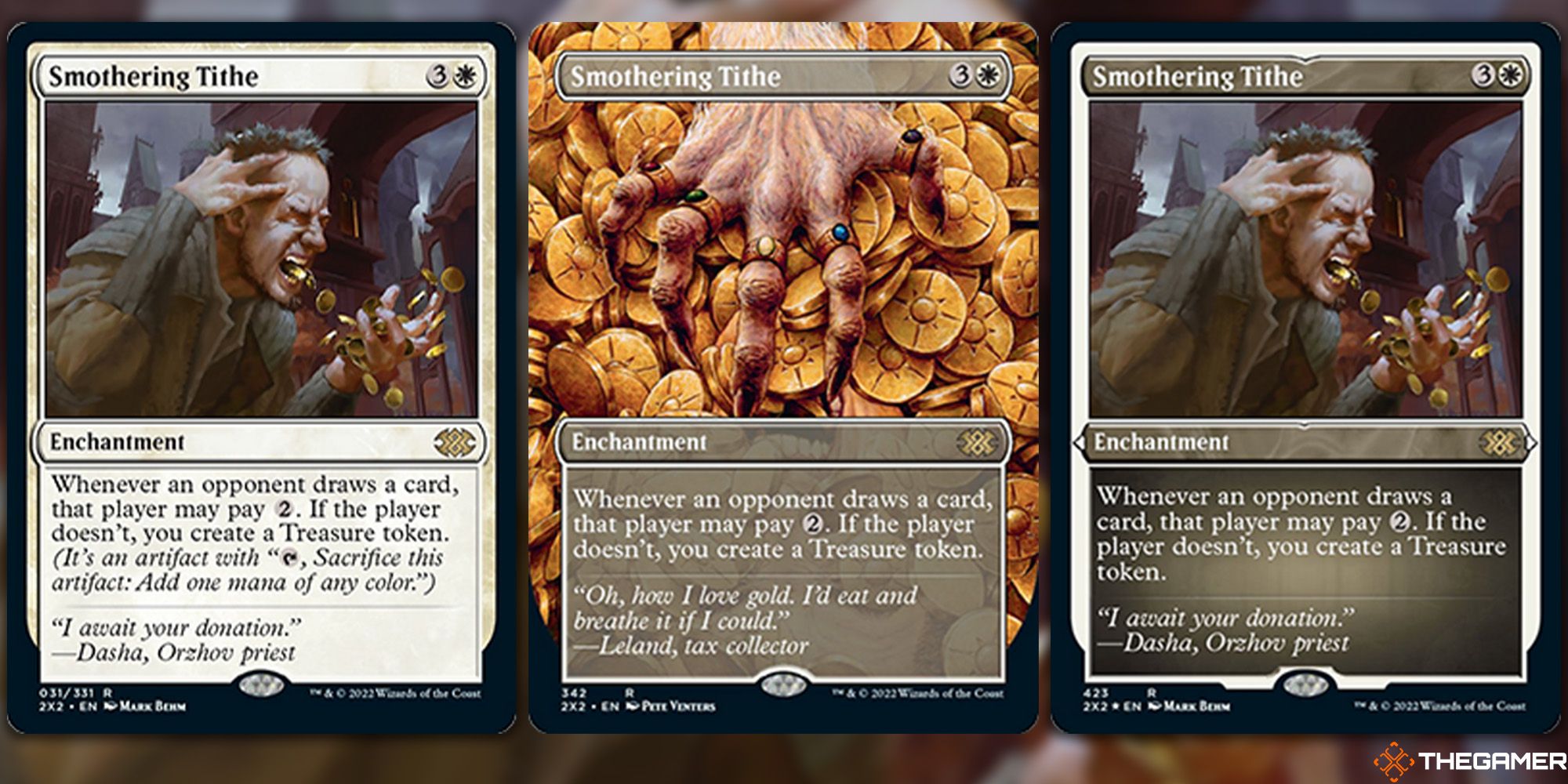 Whenever an opponent draws a card, that play may pay two generic. If the player doesn’t, you create a Treasure token.

Smothering Tithe gets its first-ever booster reprint, following its debut in Ravnica Allegiance in 2019. Although this isn’t the longest-anticipated reprint of the set by a long margin, it is one that the game has desperately needed for the longest time.

If you weren’t lucky enough to pull a Smothering Tithe in a Ravnica Allegiance pack, your only other hope was tracking down the Faerie Schemes Brawl deck from Throne of Eldraine. Other than the fact you’re having to buy a Brawl deck – a format nobody plays outside of MTG Arena – the cost has inflated to almost three times the original asking price.

Smothering Tithe is one of white’s most powerful ramping tools. Even in a post-Archaeomancer’s Map world where white has numerous ways to pull out mana, nothing is quite as useful as Smothering Tithe producing you dozens of Treasures. All it takes is for one player to crack and refuse to pay, and suddenly you run away with the game and take the win.

Of course, Smothering Tithe is also one of the Commander format’s most-hated cards, partly because of how easy it is to quietly accumulate mana, and partly because of the endless “do you pay the two?” asking it requires. While it does slow down games in a similar way to Rhystic Study, white really needs the help sometimes. 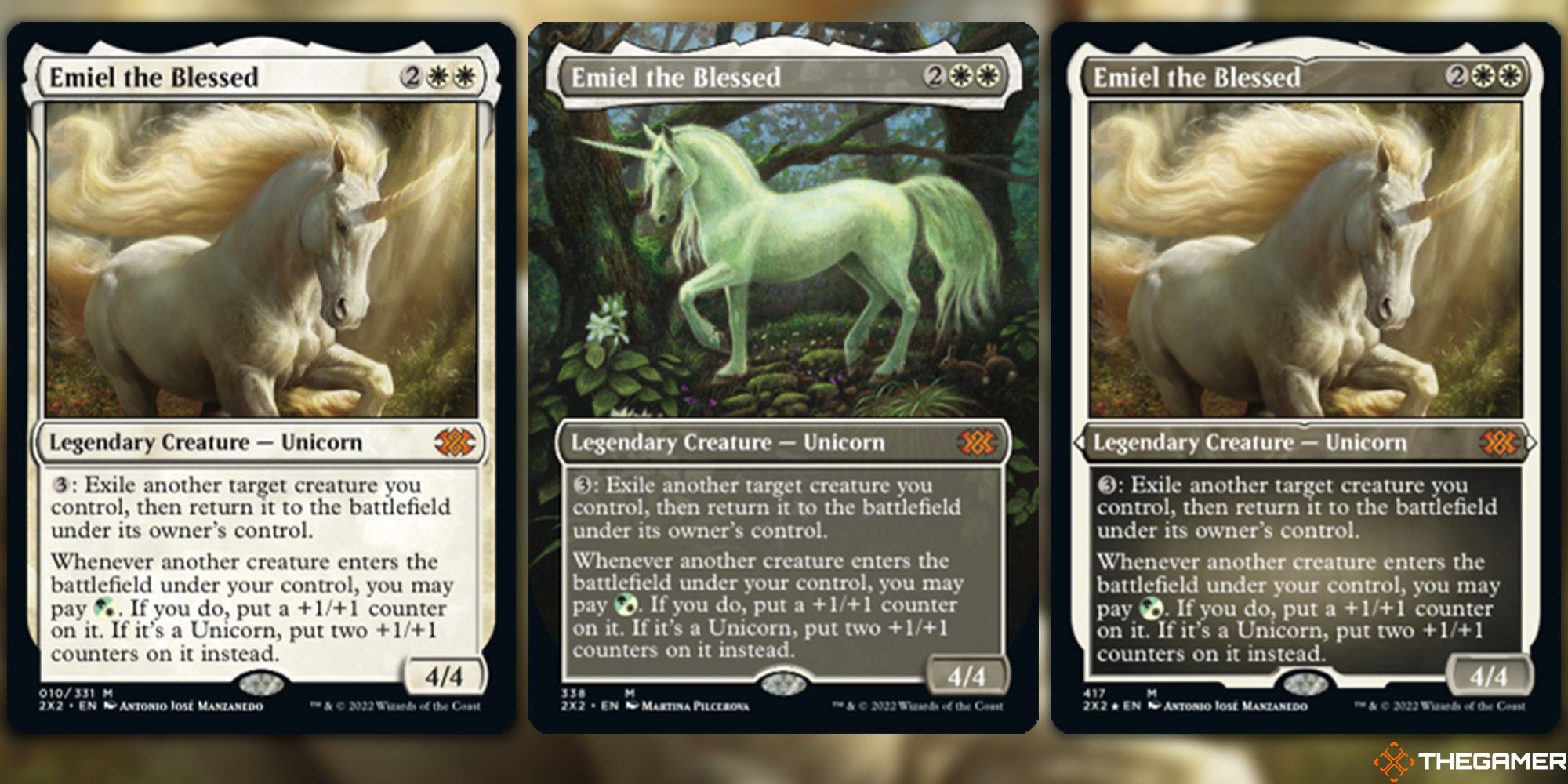 Pay three generic: Exile another target creature you control, then return it to the battlefield under its owner’s control.

Whenever another creature enters the battlefield under your control, you may pay either one green or one white mana. If you do, put a +1/+1 counter on it. If it’s a Unicorn, put two +1/+1 counters on it instead.

We couldn’t have had a flicker-focused draft archetype without having one of the most powerful flicker commanders in the game. From 2020’s Jumpstart, making its reprint debut, Emiel the Blessed may look like a cutesy Unicorn tribal commander at first, but it is frightening how quickly this horse can go off the rails.

The main selling point of Email compared to the previously revealed Roon of the Hidden Realm is that Emiel uses the faster kind of flicker. No sat waiting for your end step is required here, whatever you flicker re-enters the battlefield immediately. Combine this with cards like Solemn Simulacrum for ramp, Elvish Visionary and Spirited Companion for card draw, and Aura Shards for artifact and enchantment removal, and paying three mana to keep flickering your creatures seems like a great deal.

Though Emiel isn’t quite as combo heavy as other blink tools, it isn’t completely wholesome. Assuming you have at least four mana dorks (creatures that can tap to produce mana), you’ll be able to flicker Village Bell-Ringer to produce infinite mana and get infinite enters-the-battlefield triggers. Alternatively, use Double Masters 2022’s Phyrexian Altar with the plant tokens produced by an Avenger of Zendikar for infinite creatures, infinite ETBs, and infinite mana. 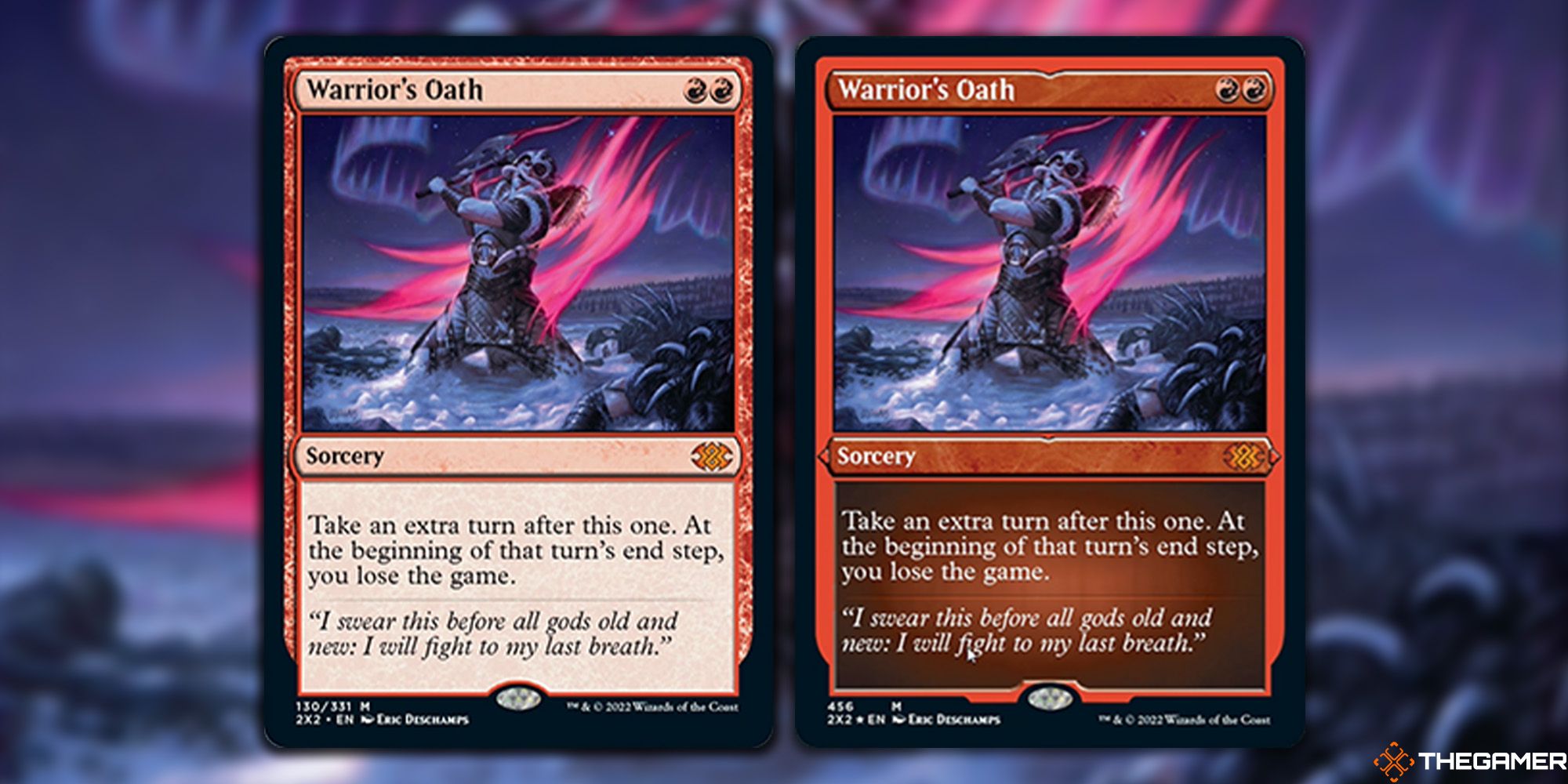 Take an extra turn after this one. At the beginning of that turn’s end step, you lose the game.

Smothering Tithe and Emiel were two recently published cards, but Warrior’s Oath has been waiting 22 years for a reprint, making it one of the longest times between non-Reserved List a card’s debut and its first reprint in the entire game. The last time we saw it was, like Imperial Seal, in the 1999 starter produce Portal: Three Kingdoms, and since then it has picked up quite a second-hand market price of almost $500.

Extra turn spells in red aren’t unheard of, with the last one we saw being Alchemist’s Gambit in Innistrad: Crimson Vow. Unlike blue, which can freely take extra turns, red has the massive downside of forcing you to lose the game at the end of the turn.

This is a card to play when you know you have the win, but just need one more turn to set up. Alternatively, you could be playing Commander Legends’ Obeka, Brute Chronologist or Sundial of the Infinite, which can tap to skip the end step and prevent you from losing.

In modern day Magic, Warrior’s Oath probably isn’t the most impressive spell – a throwaway rare from a Standard set did the same, after all. But it is a part of Magic’s history returning to the table after two decades. Plus, it may put a pin in those obscene secondary market prices. 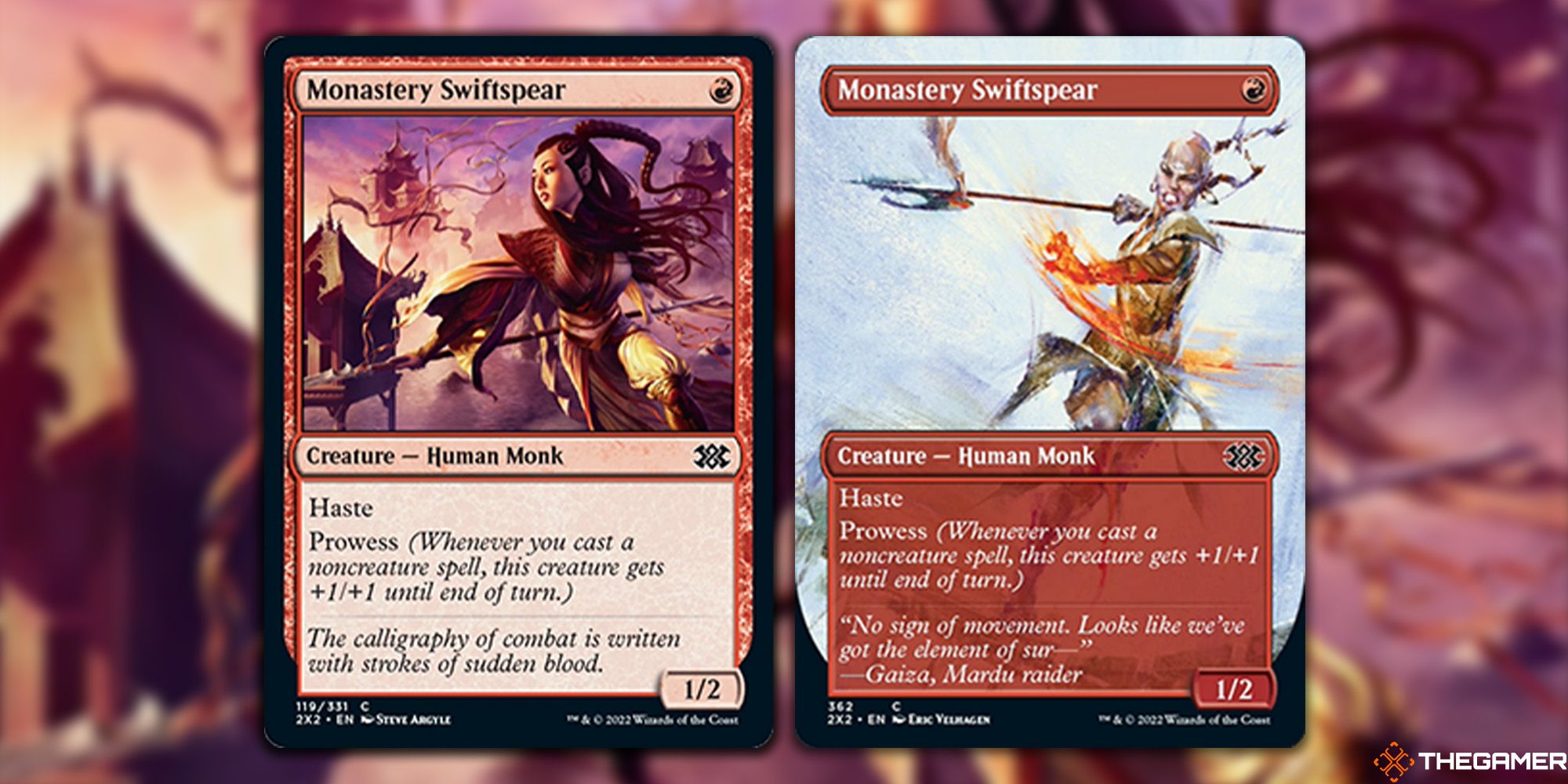 In a set where we’ve had dozens of precon commanders and some of the most powerful cards in the game, how can a 1/2 with just haste and prowess be so good? The single-word answer is Pauper.

Unlike other formats, the common-only Pauper format bases its card legality on every printed a card has ever had. As long as it’s been printed into common somewhere, it becomes legal in Pauper at some point. With Double Masters 2022, Monastery Swiftspear drops from uncommon to common for the first time, and therefore formally makes its debut in the Pauper format.

It’s by no means the only card to be doing this – Experiment One was revealed on the first day, and the final day also included Jeskai Elder and Militia Bugler. But, of all the cards that have been downshifted to common in Double Masters 2022, Monastery Swiftspear is easily the most impactful.

Pauper is already a format cantered on casting lots of cheap spells – Affinity, Goblins, Bogles, and Burn all see (or have seen, rest in peace, Affinity) significant play in the Pauper metagame. Having a one-drop creature to open out the game, before getting bigger the more you pop off in future turns is absolutely wild. To make matters worse, Monastery Swiftspear has two toughness, which allows it to tank a surprising number of things a 1/1 simply couldn’t.

For example, in the red/white Boros Aggro decks, where this could be a huge new tool, you’ve already got cheap cards like Lightning Bolt, Kuldotha Rebirth, and Galvanic Blast. Buffing your Swiftspear up to hit for four or five damage isn’t going to be difficult at all, and with four copies in the deck it’ll be a quick game ender. This has “potential new staple” written all over it. 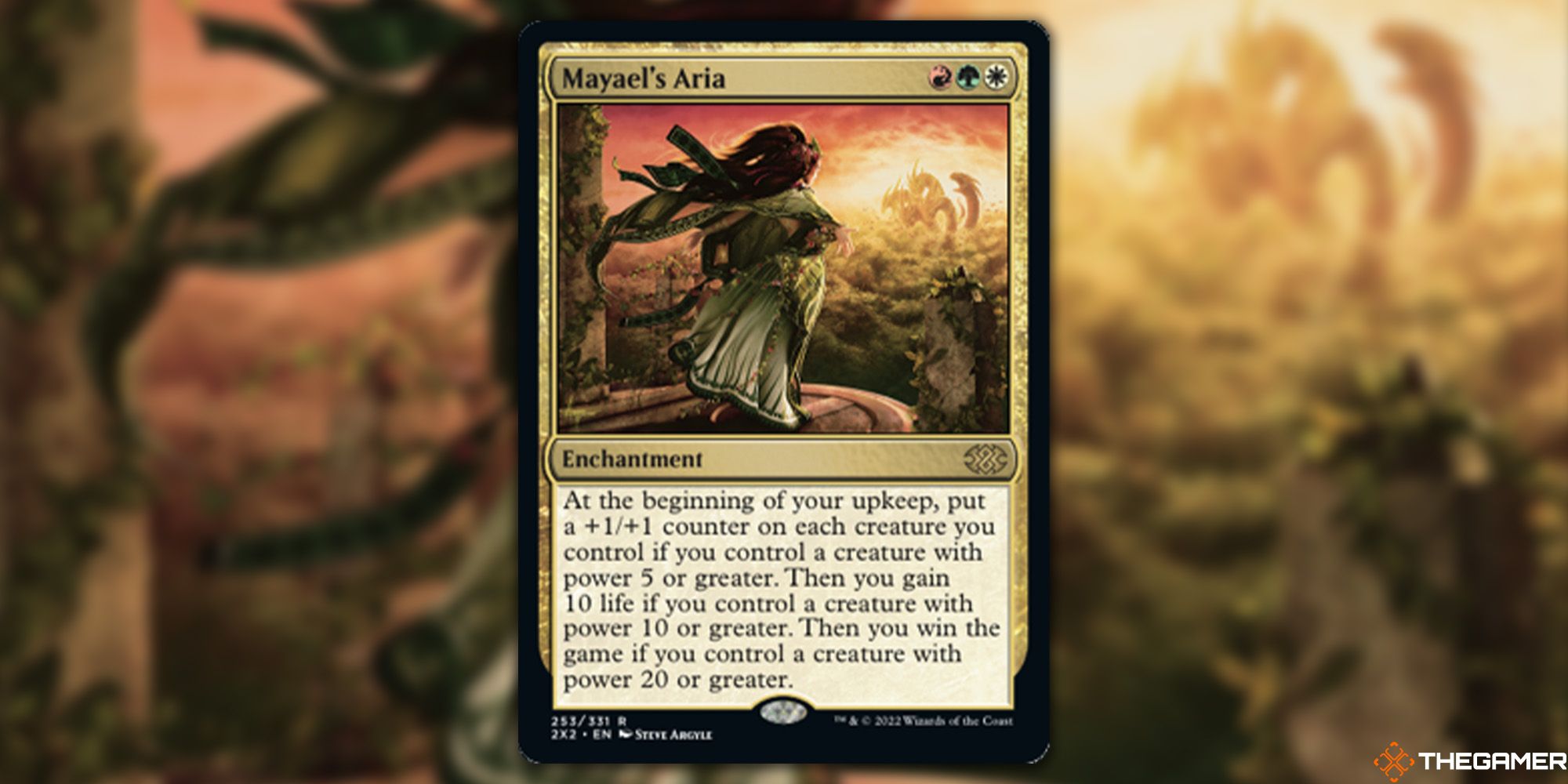 One red, one green, one white enchantment:

One of the final rares we’ll see in Double Masters 2022 is Mayael’s Aria, getting its first-ever reporting after it was first printed in 2009’s Alara Reborn.

Maybe due to its lack of reprints, Mayael’s Aria hasn’t seen a whole lot of play. And yet, it could be a killer in the new landscape of Commander, where it’s incredibly easy to pull out and buff creatures to above 20 power. To sweeten the deal, we also had one of the top commanders that uses Mayael’s Aria revealed for Double Masters 2022. Uril, the Miststalker’s ability to gain +2/+2 for each Aura attached to it lets you put counters and gain life almost straight off the bat.

A lot has changed in Magic since this was first printed 13 years ago, and there are lots of Naya (red/green/white) commanders this would work great with. Gishath, Sun’s Avatar would be a fantastic deck to run Mayael’s Aria in, as all those large, stompy dinosaurs would be buffed up before taking a win in just a couple of turns. There’s also Obuun, Mul Daya Ancestor; Zacama, Primal Entity; and even Minsc, Beloved Ranger’s Boo token to work with.

If you’re wanting to make a Naya deck with big monsters going smash, there are by far worse enchantments you could pack in it with Mayael’s Aria.