While sometimes regarded as one of the weaker colours in the Commander format, there are still plenty of viable commander options in mono-white. Common themes include lifegain, white weenies (we'll get into that later) and protection. In recent years, Magic: The Gathering has worked to iron out some of white's weaknesses, such as card draw and ramp, to bring it up to speed with the other colours.

Like every colour, there are staple commander options that see a lot of play and then those commanders that, while strong, fail to make it to the helm of a deck. But if you're looking to shake it up and try something new, mono-white has some great, underrated commander options. 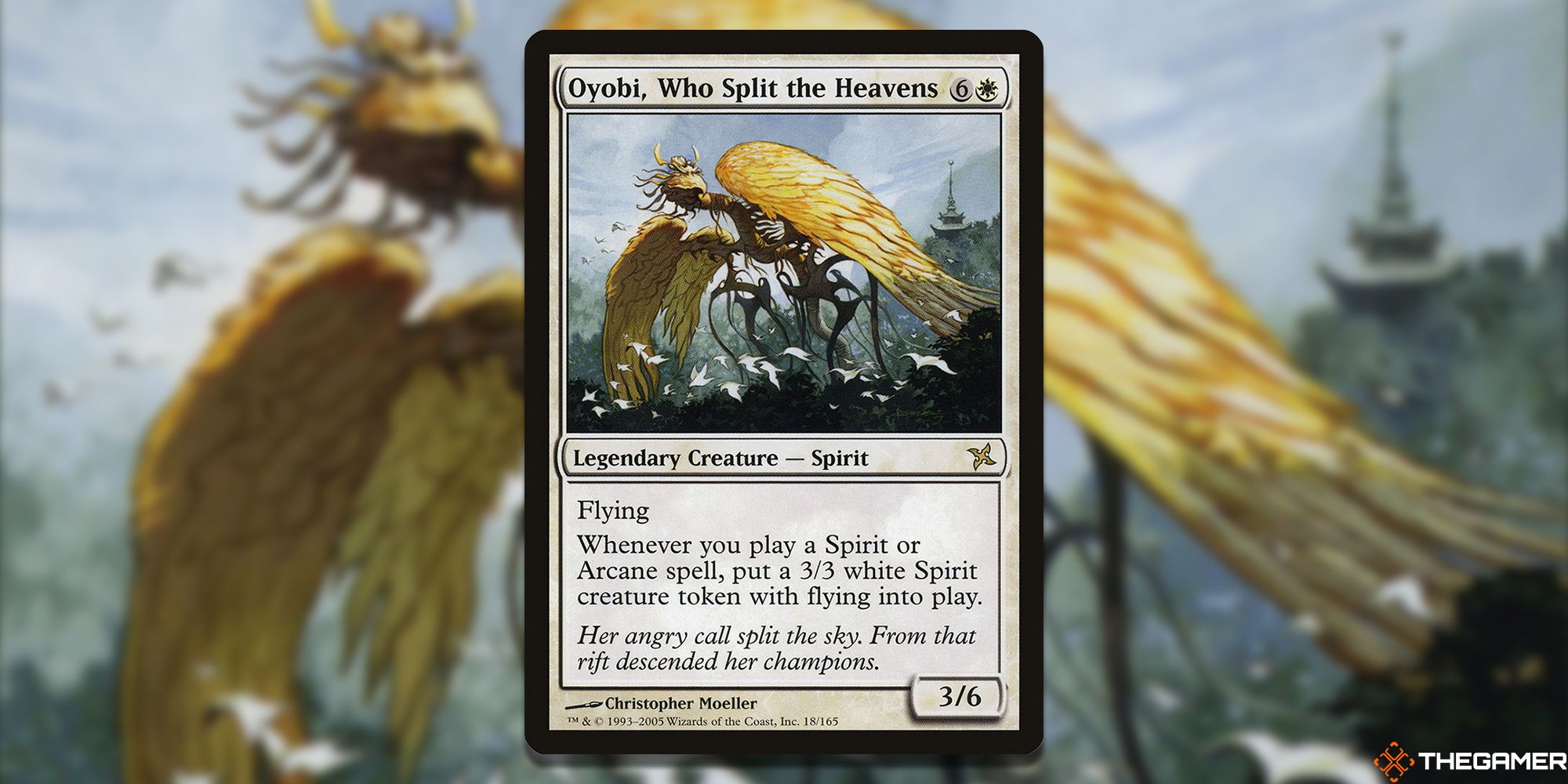 Oyobi, Who Splits the Heavens is a Spirit themed deck. From the older Kamigawa sets, this commander synergizes with both spirit and arcane spells, allowing you to create a 3/3 Spirit creature token every time you cast a spell of that type. Although seven mana may take a while to get out with mono-white, you can add some ramp artifacts like Thran Dynamo to speed up the process.

Once Oyobi is on the battlefield, you can start slinging spirit and arcane spells to build a massive army of creatures. With creatures like Clarion Spirit, you can generate even more Spirit tokens. Be sure to include some protection for Oyobi with cards like Kami of False Hope and Blessed breath, since it will be essential for winning in the late game. 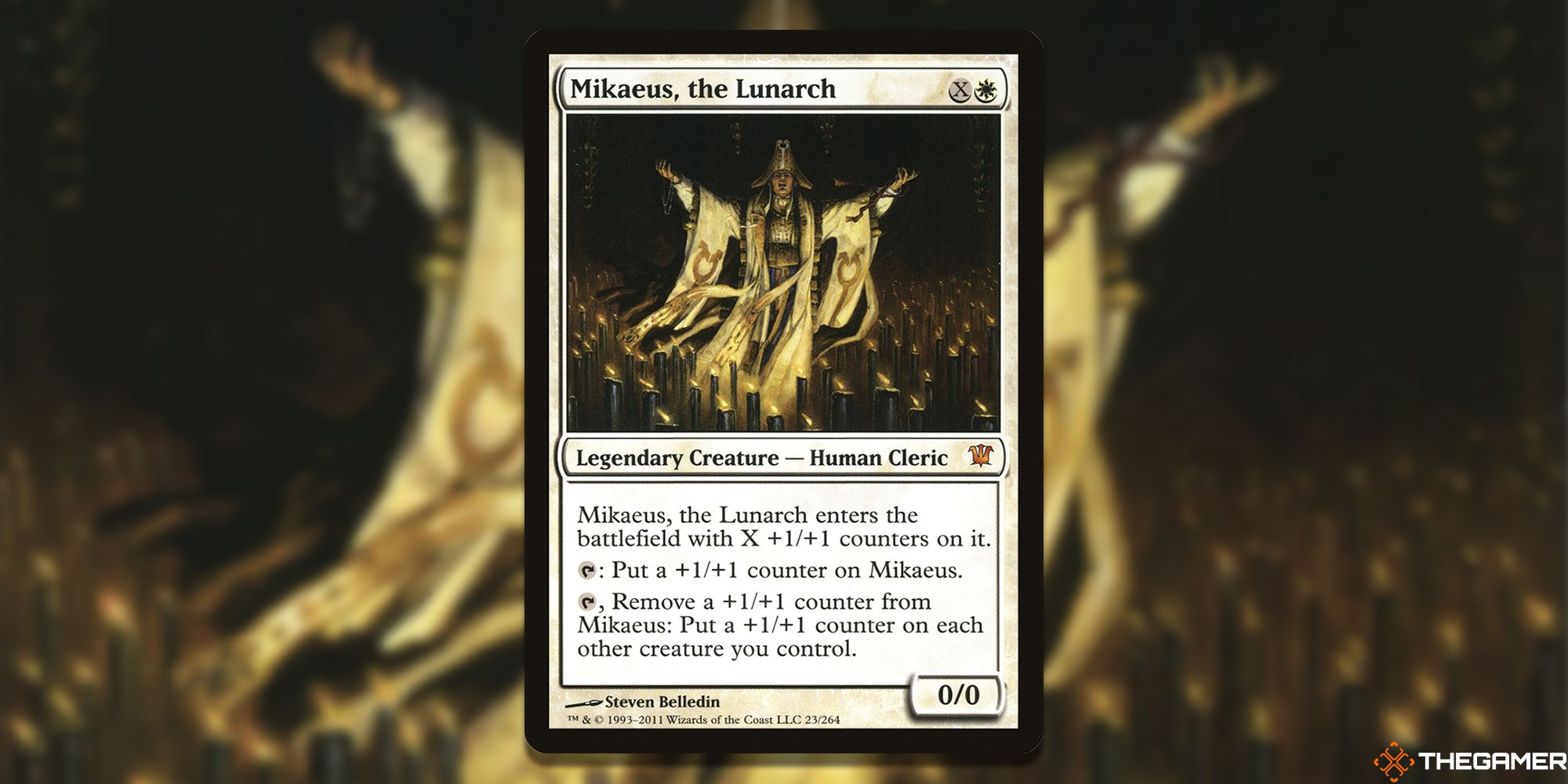 Miakeus, the Lunarch is all about loading up your creatures with +1/+1 counters. This deck works best with a lot of low-cost creatures, since Mikaeus's second ability lets you put a +1/+1 counter on every creature you control in exchange for one of his. As long as Mikaeus isn't removed, your army of small creatures will quickly become very strong.

White also has a lot of other abilities that generate counters such as training, bolster and outlast. So even if Mikaeus is not on the battlefield, you'll have ways to boost your creatures. Since you want to be activating his ability every turn, add in enchantments like Cathar's Crusade and Felidar Retreat to ensure he always has counters on him. 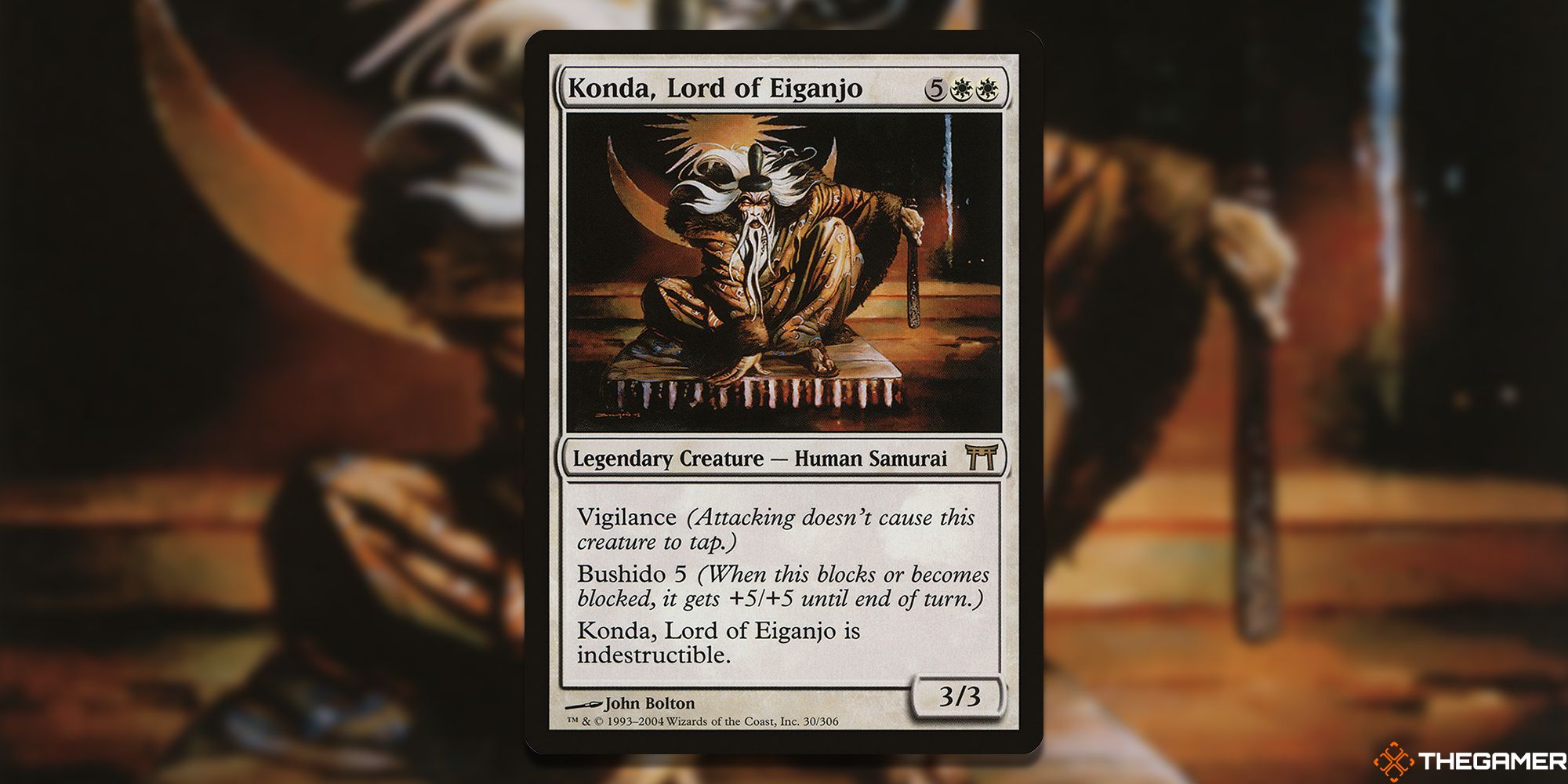 If ever there was a final boss in a Samurai deck, it would undoubtedly be Konda, Lord of Eiganjo. Seven mana may be a lot for a voltron commander, but this indestructible powerhouse is well worth the wait. His bushido ability makes Konda an 8/8 whenever he attacks or blocks and since he has vigilance and indestructible, he'll be doing a lot of both.

Weaker Samurai like Sensei Golden-Tail and Nagao, Bound by Honor can hold the lines until Konda reaches the battlefield. When he does, make sure you have equipment like Loxodon Warhammer ready to equip to him so he can smash through enemy defenses. Since he has indestructible, Konda can also survive board wipes like Vanquish the Horde, leaving your enemies wide open for lethal commander damage. 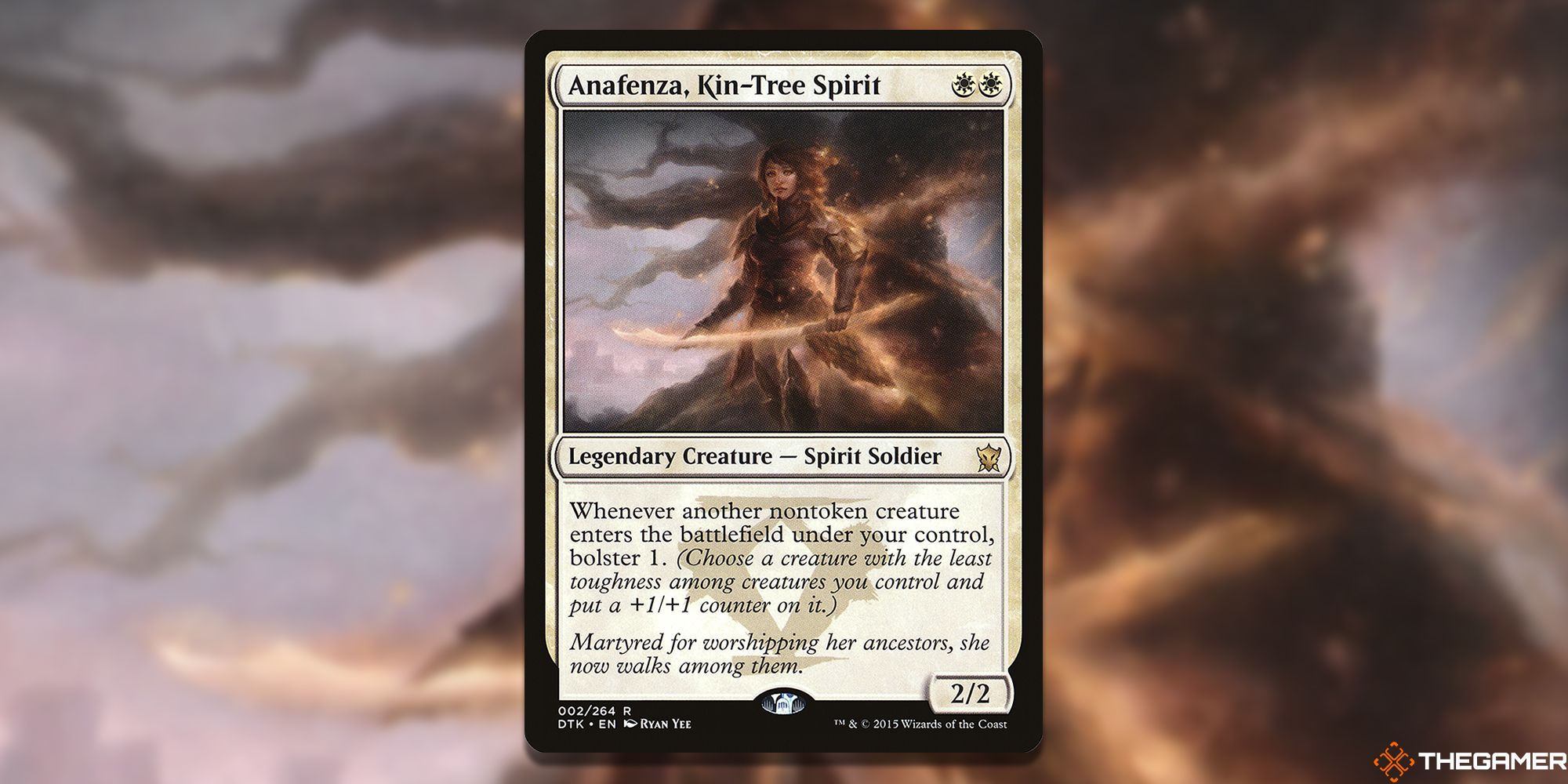 Anafenza, Kin-Tree Spirit is a great example of an underrated White Weenie commander. This strategy involves using low-cost, low-strength creatures with, usually with combat abilities, and boosting their power through abilities like Anafenza's. Keeping the overall mana cost of your creatures low will allow you to get the most value out of this commander's abilities.

There are also plenty of creatures that give added value when casting low power or low mana value creatures. Creatures like Welcoming Vampire and Mentor of the Meek will help you get some extra card draw, something white often struggles with. 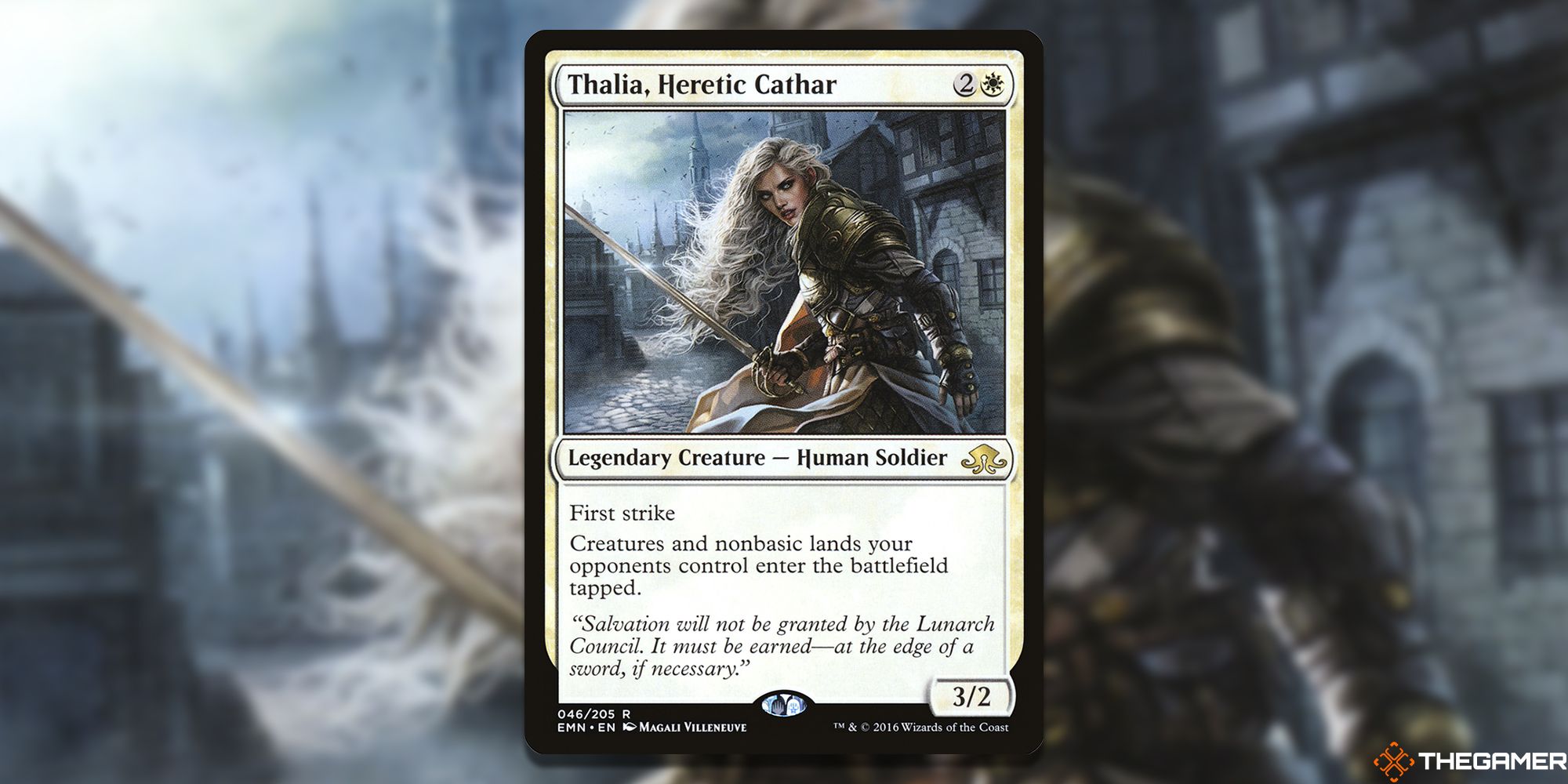 Mono-white doesn't have a lot of access to ramp, so a commander that stalls your opponents while you build your board presence is a huge asset. Thalia, Heretic Cathar simply makes it so that creatures and non-basic lands your opponent control enter the battlefield tapped, limiting their access to mana and their power in the combat phase.

Thalia works best as a control deck, including cards like Spelltithe Enforcer and Ghostly Prison to further restrict your opponents' options. The strategy here is to control what players can and can't do and force them to settle their problems in combat, which mono-white excels at. 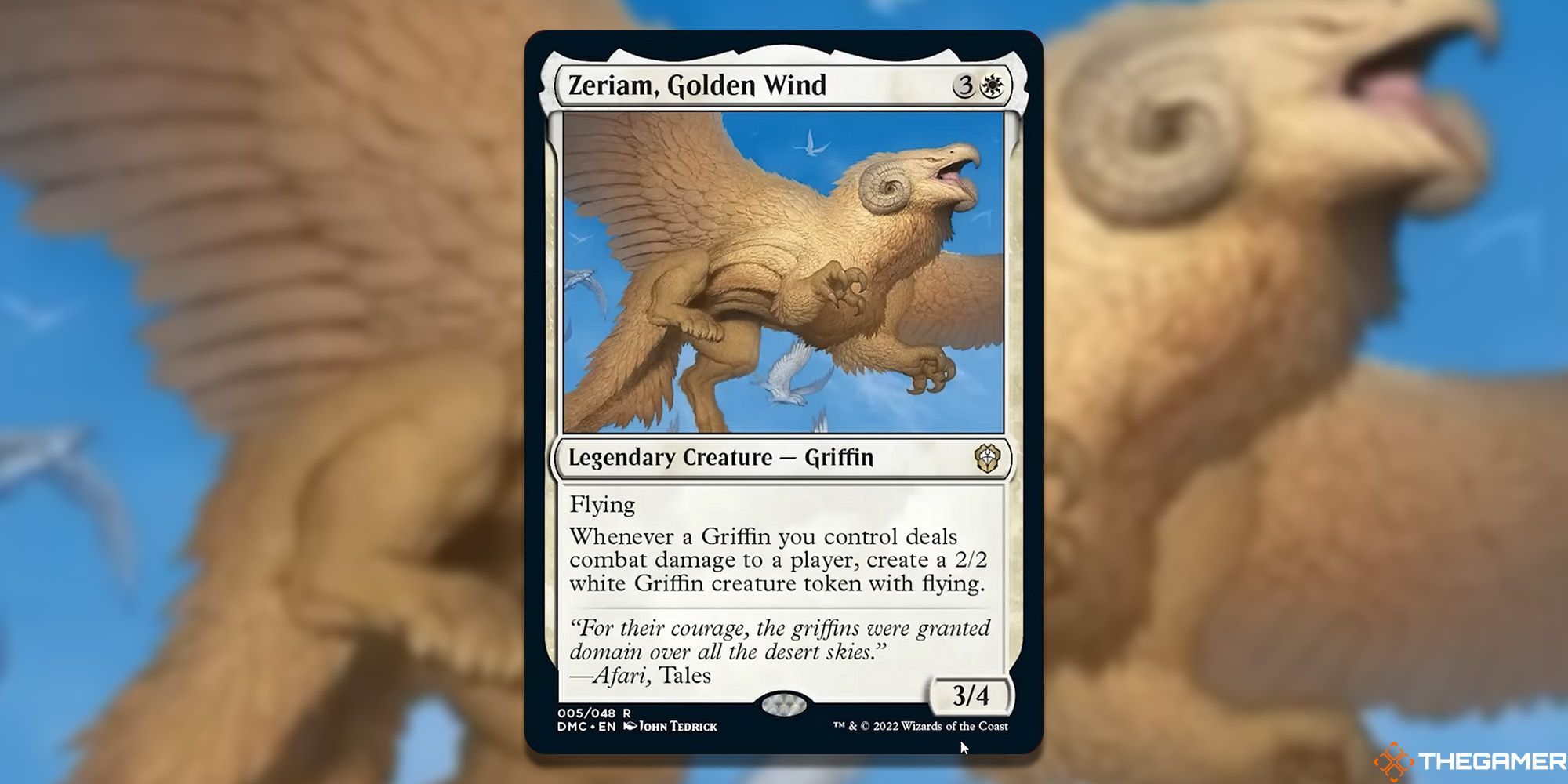 Zeriam, Golden Wind uses a simple, yet highly effective strategy: flood the board with flying creatures and relentlessly attack. Griffins are not generally regarded as a very powerful creature type, but Zeriam gives them a viable place to excel in the Commander format. Load the deck with Griffins like Zuberi, Golden Feather and Bladegriff Prototype and let Zeriam effectively double the amount of creatures you have.

Cards like Magus of the Moat will also make it so non-flying creatures can't attack, giving you a combat advantage. Shapeshifters like Metallic Mimic will also grant you their value as well as trigger Zeriam's ability. 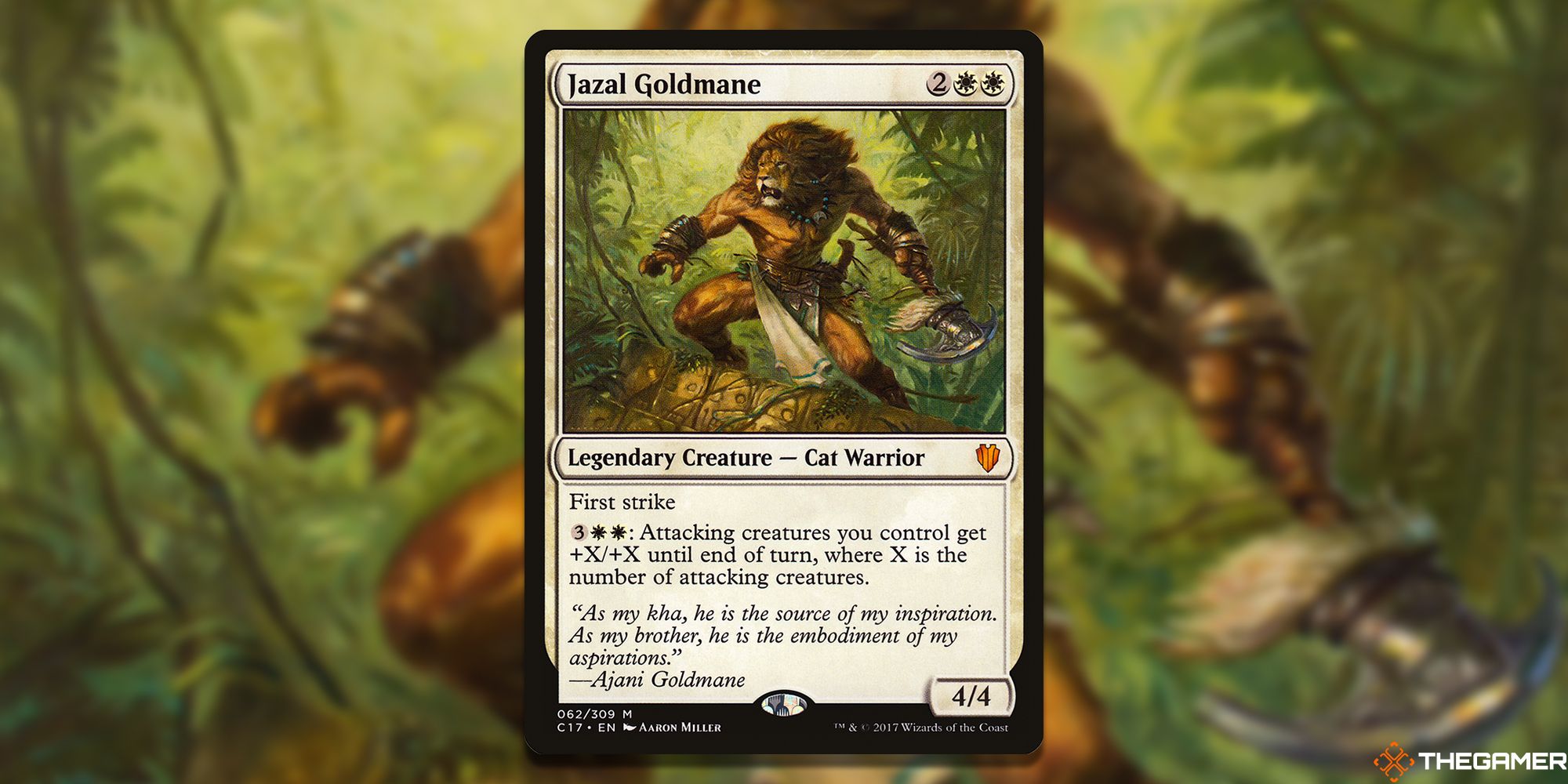 Jazal Goldmane is a purely combat-focused commander. There are a number of routes you could go with this deck however, one of the simplest and most powerful would be a creature token strategy. Cards like Increasing Devotion and Secure the Wastes will generate a large number of creature tokens, which will then get a huge boost when they attack in tandem with Jazal Goldmane's activated ability.

Mass token generation, coupled with enchantments like Cathar's Crusade, will generate ridiculously powerful creatures that can steamroll your opponents' life totals, especially when you add in Jazal's ability. 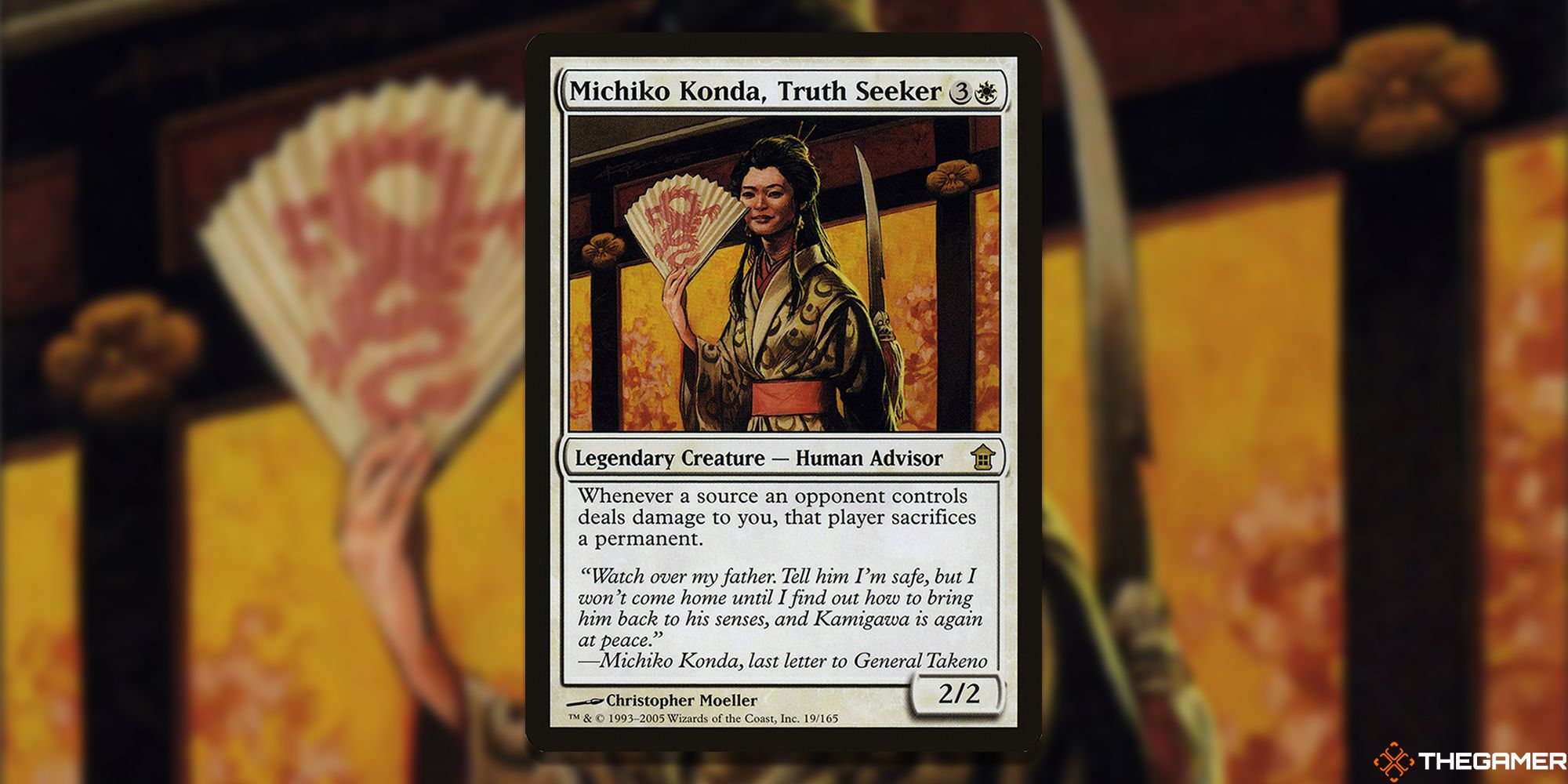 Michiko Konda, Truth Seeker punishes your opponents for damaging you. If any source they control deals damage to you, whether through combat, an enchantment or an instant, they are forced to sacrifice a permanent. This will force opponents to target each other during combat, allowing you to build your board while keeping your life total up.

There are plenty of other white cards to help deter your opponents from going after you, such as Karmic Justice. This deck should focus on making you an undesirable player to target, allowing you to swoop in during the late game with big creatures to finish off your opponents. 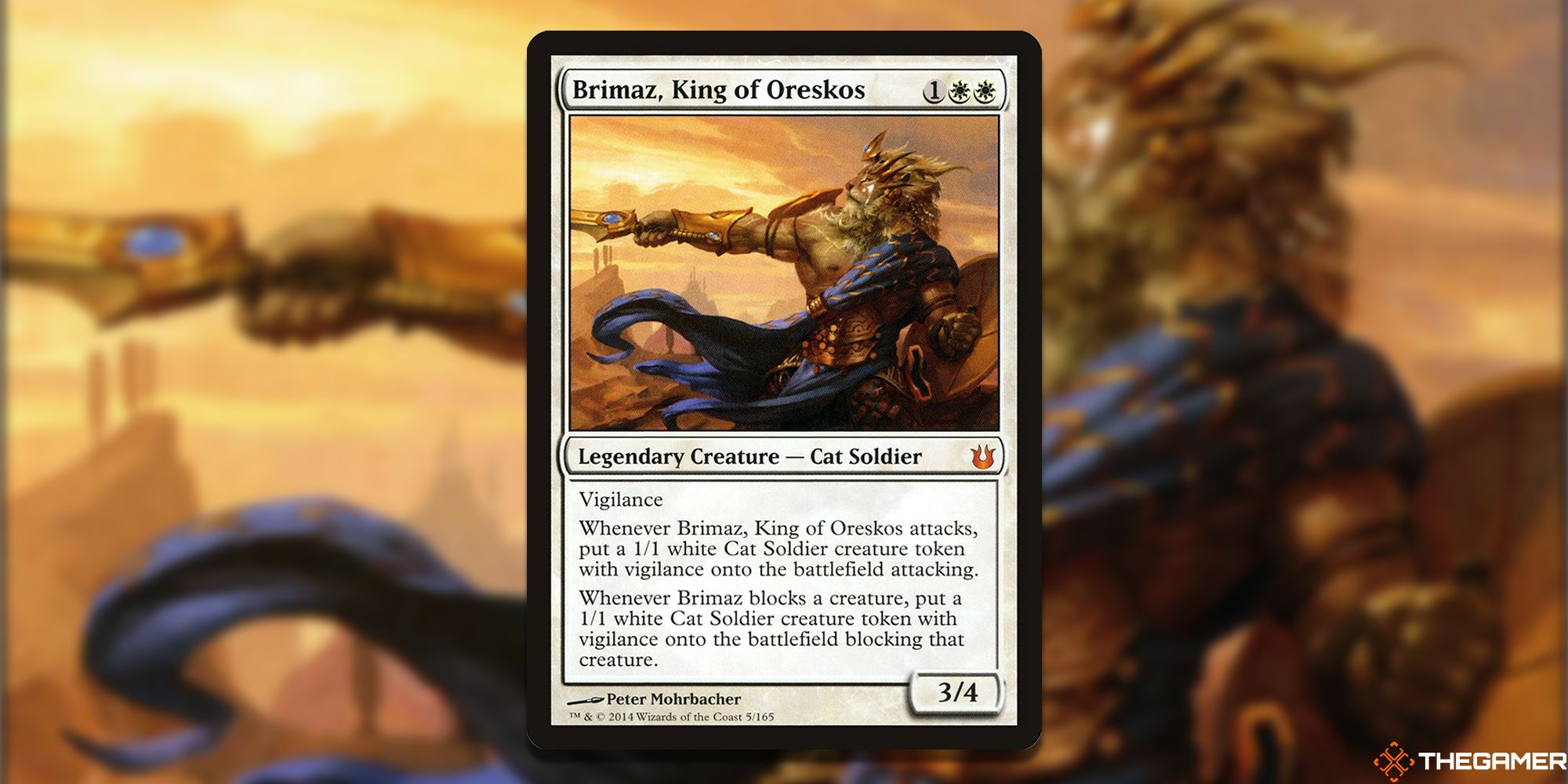 As king of Oreskos, Brimaz is best used with a loyal battalion of Cats behind him. A 3/4 for three mana is a very strong stat line, and having vigilance will allow him to trigger his ability multiple times during a turn around the table. Include cards like Leonin Warleader to generate more Cat tokens and Prava of the Steel legion to boost all of your creature tokens.

This deck should also include cards like Honor of the Pure to increase the strength of the tokens that Brimaz creates, allowing them to stay on the board after combat. You can add in equipment like Sword of the Animist to generate some much needed ramp. 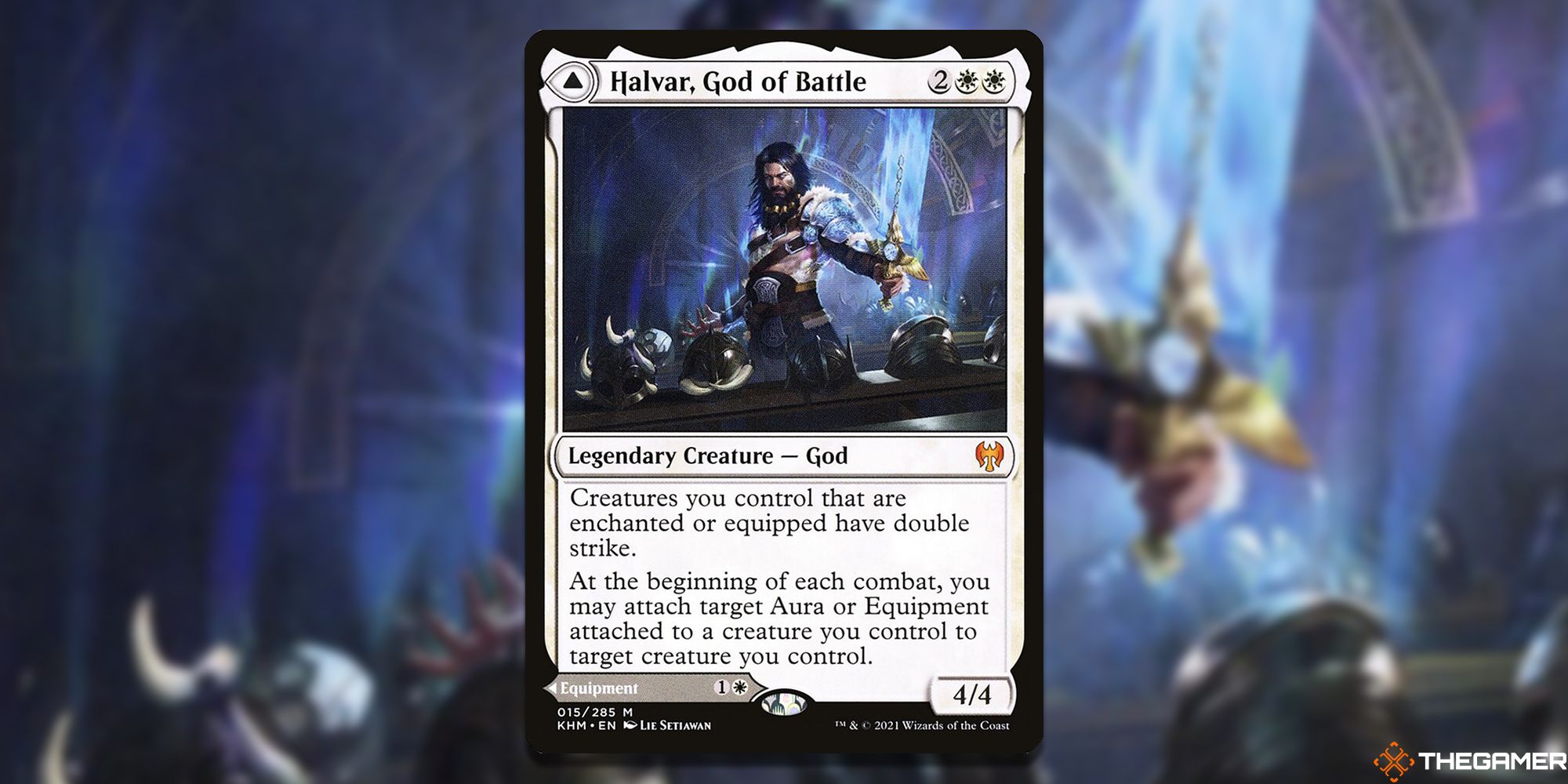 Where there's mono-white, there's bound to be an equipment-based deck, and Halvar, God of Battle earns his namesake with his ability. Granting any creature equipped with an aura or equipment double strike, Halvar can turn the meekest of creatures into combat powerhouses. Additionally, the ability to move equipment and auras from one creature to another offers extra flexibility during combat.

With so many equipment focused mono-white creatures, you can also cast this commander as Sword of the Realms. It allows powerful white creatures like Armored SKyhunter to be returned to your hand when they die, ensuring you can reap their value over and over again.