Despite counting Baldur's Gate 1 and 2 among my all-time favourite games, I resisted playing Icewind Dale for literal decades. I'd always heard this frosty CRPG was similar to BioWare's seminal series of D&D adventures, but with a laser focus on combat. A feature-length dungeon crawl, basically, with no story or exploration. But anyone who said that was exaggerating wildly—and, in fact, completely wrong—and I blame them for why it took me way too many years to lose myself in this incredible video game. Icewind Dale is easily up there with Baldur's Gate, Planescape: Torment, and all those other great '90s CRPGs.

Here in the Northern Hemisphere the days are getting shorter and the air is getting colder, and it's this time of year when, for some reason, playing Infinity Engine RPGs feels right. I've jumped back into Icewind Dale, this time on Switch, and I've been struck again by what a sublime game it is. The idea that it has no story to tell is utter nonsense: it just does it in a different way. While a lot of your time in Baldur's Gate is spent wandering villages and having long chats with hairy oddballs, Icewind Dale tells its story through its world. The dungeons aren't just dingy mazes filled with loot and monsters: they have tales to tell. 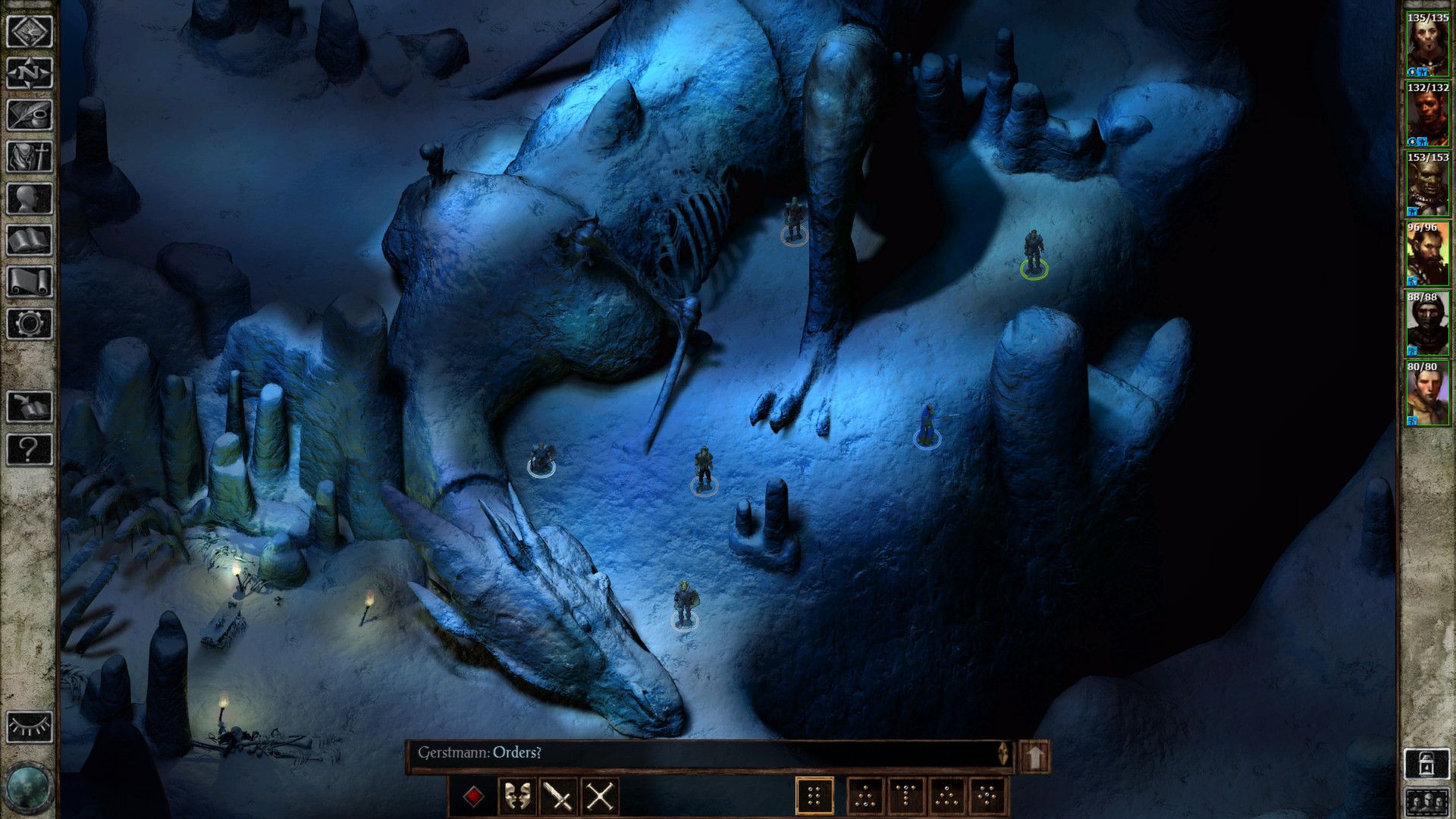 When you start a new game, there's no elaborate cinematic introduction sequence to establish the setting and tee up the story. You and your party of fellow adventurers are in a cosy tavern, and it's from here their adventure begins. Or your adventure if you're one of those masochists who likes to solo the game. It's entirely possible to finish Icewind Dale without the help of a party, but this self-imposed trial isn't for the faint-hearted: it's a hellishly difficult game, especially in the final act. You can at least lower the difficulty if you'd rather just steamroll every enemy you see and focus on the story and world, which are both superb.

This is a classic fantasy world of caves, catacombs, temples, and other deep, forgotten places, each of which is loaded with weird D&D creatures, traps, treasure, and intriguing stories about the history of your surroundings. There are a pair of towns, Easthaven and Kuldahar, but you don't spend much time in them. Icewind Dale is like a big fantasy road trip, taking you on a long, dangerous trek across the game's titular frozen wilderness. You meet the occasional NPC, but for the most part it's a lonely, quiet game punctuated by the sound of clashing steel, growling monstrosities, and the repetitive quips of your hero and party. 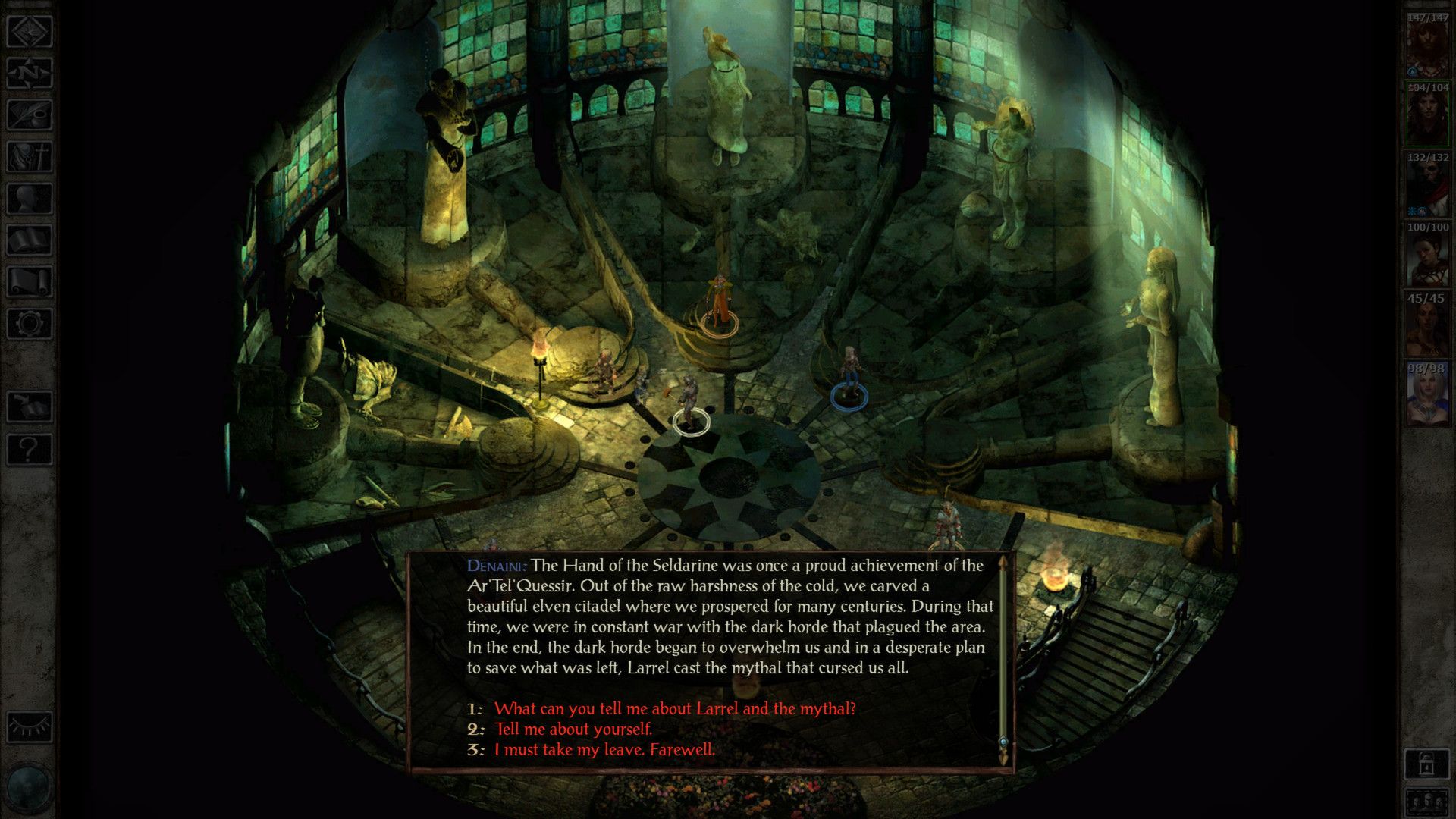 Some of Icewind Dale's dungeons are the best in the entire genre: particularly the Severed Hand. This ominous elven fortress was once a thriving, vibrant community, but a tragic event in the past left it ruined and forgotten. As you explore its haunted hallways you meet the ghosts of the fallen elves, who tell you about the terrible things that happened there. It's a perfect dungeon in every respect, from the layout and combat encounters to the narrative that holds it all together. It puts other RPGs to shame, and it's worth playing Icewind Dale for this alone—although you will have to play a decent chunk of the game before you can access it.

Icewind Dale is showing its age, but the quality of its richly tactical combat, evocative world-building, and compelling storytelling makes up for the elements that time hasn't been quite so kind to. I still think it looks gorgeous, though. Those pre-rendered backgrounds are full of character, and look especially nice on the pin-sharp screen of the Switch OLED. Just brace yourself for a stiff challenge when it comes to the combat, of which there is a lot. On anything but the lowest difficulty you have to think tactically and make smart use of buffs, spells, and other D&D wizardry to survive its gauntlet. This ain't no hack-and-slasher.