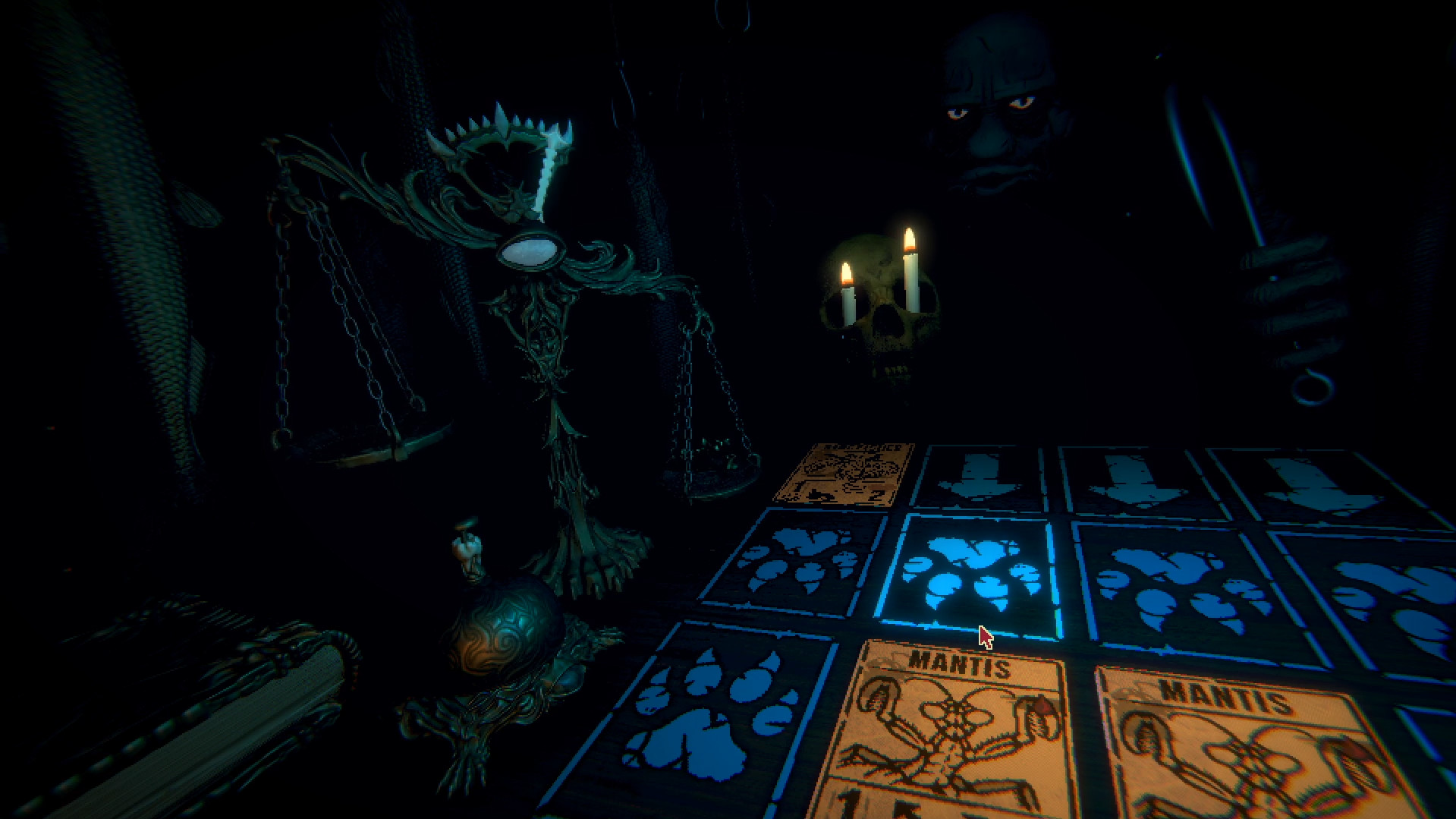 The new game from the creator of Pony Island is a mix of roguelike, collectible card game, and survival horror… and it’s wonderfully diabolical.

Indie games are often accused of being the last bastion of originality and individuality; passion projects created by tiny teams of bedroom programmers that are completely unique in concept and presentation. There are many indie games that fit that description but at the same time there are also hordes of Metroidvanias, roguelikes, 2D platformers, and deck-building card games, many so similar to each other they could almost have rolled off a AAA production line.

That’s not something you could accuse Inscryption of and yet it is a deck-building card games, one with roguelike elements that immediately beg comparisons with the likes of Slay The Spire. Beneath the surface there’s also a lot of, initially unsuspected, similarities with developer Daniel Mullins’ previous game Pony Island. It’s not billed as a sequel, but like any artist that returns to similar themes via a different route the connective tissues will be clear to those that play both.

Inscryption has other similarities with Pony Island, in the fact that it’s almost impossible to describe the premise without a) making it sound nonsensical and b) spoiling all the best bits. Inscryption is a game that it’s best to know as little about as possible before you begin and if you trust our judgement or have already enjoyed Mullins’ previous games (he also made the less well known The Hex), then the best advice is to just dive in and start playing Inscryption right away.

The game begins with you locked in a cabin in the woods, with a fiendish looking companion who challenges you to a game of cards. Not a game of a poker but a weird, modern hipster kind of card game that’s part tabletop role-player and part collectible card game. Like any deck-building game defeating enemies provides new cards to add to your deck, but here the rules are literally a matter of life and death.

If you die in the card game you die in the meta reality of Inscryption itself, where otherwise you’re trying to explore the cabin and solve its escape room style puzzles between matches, in order to gain powerful new cards and, maybe, some hints as to what is really going on.

The card game is themed around various types of wildlife, from ants to grizzly bears. There are increasingly complex rules and special abilities for rarer cards but at a basic level you’re trying to deal so much damage to opposing animals that you also injure the card player behind them. To play a new card you have to have a specific amount of blood on hand, which often means sacrificing lesser creatures to bring in larger ones.

Sacrifice is the primary theme of Inscryption, both in terms of gameplay and storytelling. Which is hammered home via both unique story beats and one-shot special items that can turn the tide of a match, but which are especially disturbing in nature.

We’re trying to be careful not to spoil anything here but the game delights in pulling the rug from under you, altering your perception of both the card game and your situation multiple times. In each case though both gameplay and story are perfectly in step, as the plot opens up at the same time as the card game gains new rules, that add additional depth, and you get to explore more of the cabin.

The presentation is superb for such a low budget game, especially one made essentially by just one person. The main visuals for the card and board game are purposefully low resolution, like a PlayStation 1 game, but they’re highly dynamic and strangely unsettling both in terms of the art style and the fact that you know the game could flip out at any time, into something far less predictable than a mere deck-builder.

Mullins also experiments with other retro art styles, from top-down 2D to old-fashioned full motion video footage that looks like something from a 90 interactive movie. The technology is amusingly incompetent but the way it’s used in the game is frequently disturbing, as the story becomes ever more unnerving.

If there’s one fault to be levelled against Inscryption it’s that, as weird and imaginative as it is, if you have played Pony Island you can see that it is using many of the same tricks and plot themes, just in a different context. If it weren’t for the card game itself this would count as a surprisingly straightforward sequel, on a thematic level – despite the different setting.

Even if you haven’t played Mullins’ previous titles there’s some general concepts that will be familiar from other media, as well as a couple of meta game elements that Hideo Kojima fans will instantly recognise as familiar.

It may seem odd to describe such a peculiar game as being predictable but depending on your gaming background it’s not the deckbuilding and the roguelike mechanics that seem a little too familiar but some of the narrative tricks and story structure.

There’s nothing wrong with a good sequel though, in fact it’s rare that there ever is such a thing, and if you’ve never experienced the unnerving strangeness of Daniel Mullins before this is a great place to start.

In Short: A work of devilish cleverness that’s both a mockery and celebration of collectible cards games and an increasingly disturbing horror story about the cost of victory.

Pros: Wickedly inventive take on deck-building card games that would be highly entertaining even without the nuanced storytelling and occult atmosphere. Superb low-tech presentation.

Cons: A very different game to Pony Island but a lot of the themes and narrative tricks are very similar, making the game oddly predictable at times. Card game element can get subsumed by the meta narrative.