Forspoken has been delayed yet again, this time to January 2023. The upcoming JRPG from Square Enix and Luminous Productions has had a rough time of it, with the majority of its trailers met with relative apathy alongside multiple hold ups that prevent this PS5 exclusive from making the impact it is desperately hoping for. It also just looks really boring.

The reason for the delay was due to discussions with key partners, which to me sure sounds like Sony wanted the spotlight for God of War Ragnarok and asked Forspoken to please nudge itself into next year to make things easier for everyone – probably asked less politely than that. Their audiences don’t actually crossover – one is an open world role-playing game and the other is narrative blockbuster – but Jim Ryan and the gang have enough power to strongarm such a move.

Even without a delay into the January graveyard, it still felt like Forspoken was approaching with minimal fanfare. It’s a new IP powered by a next-gen console with a sprawling fantasy world and so much going for it, but for some reason hasn’t lit the world on fire. Even initial previews, which didn’t allow for hands-on time, had critics coming away underwhelmed. Its depiction of fantasy felt focus tested and sanitised, taking on the isekai genre with a compelling protagonist yet not enough substance to its setting to feel worthwhile. 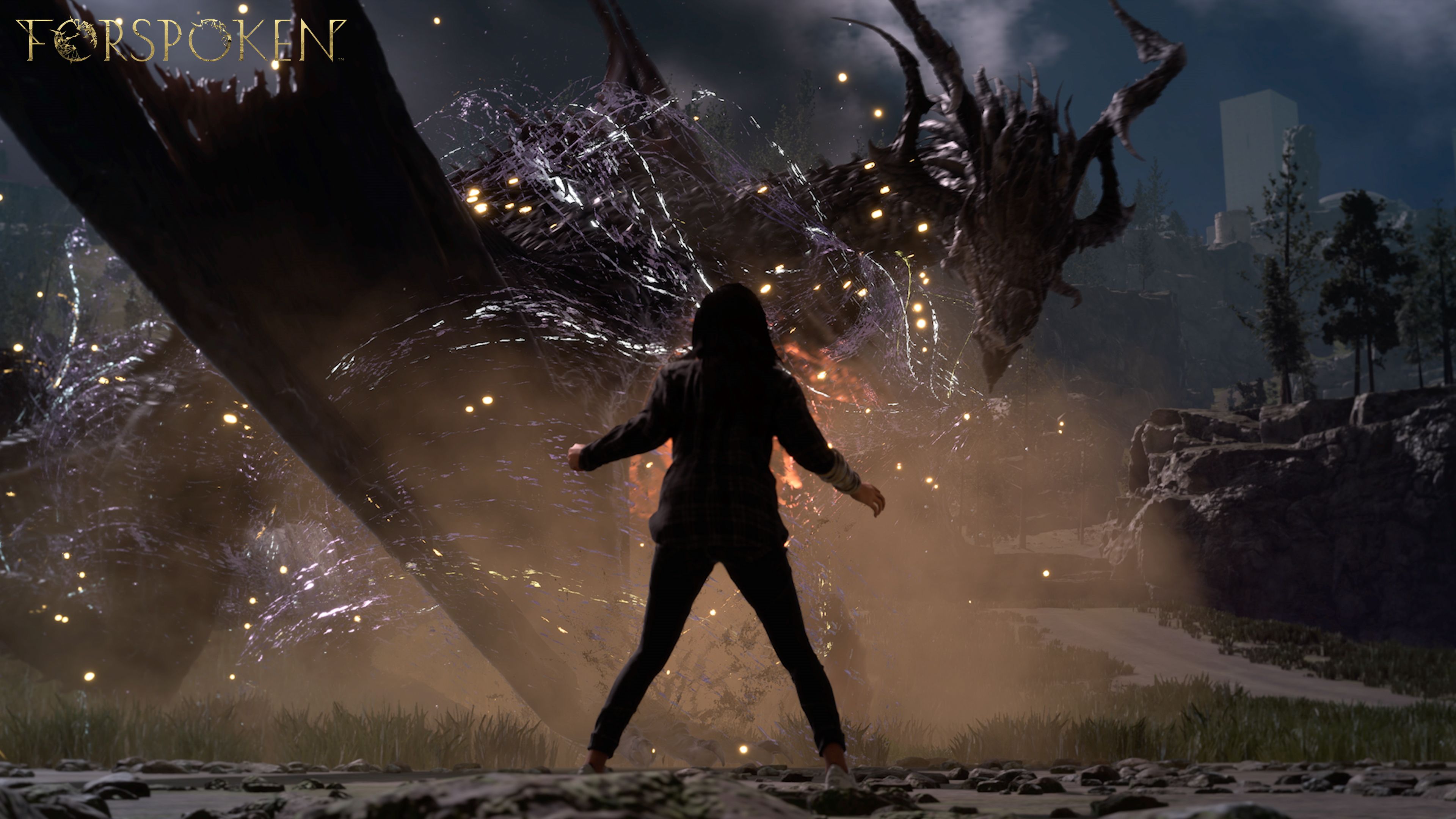 All the delays in the world won’t fix this, but they certainly don’t help a public perception which has long shifted towards indifference. Beyond a heroine who has been transported into a fantasy world and is forced to adopt magical powers and fight for what is right, there is little more to Forspoken worth caring about. It has open world gameplay with a focus on fast movement and traversal, but if the environments we’re clambering across hold no narrative weight then who cares? Much of its combat utilises spells and melee combat, but so much of the former comes across as magnified versions of firearms from a shooter.

The preview event spent ages delving into the backstory of this world and its characters but never once gave us a reason to give a shit. I think the disparate relationship between a Japanese development studio and a Western storytelling team didn’t help, with much of the writing clashing with whatever mechanics and imagery the game itself is trying so hard to convey. The end result is rather bland, with neither side reaching their true potential or trying a little too hard to create something without an end goal in mind. Referring to your Black main character as a “hip-hoppy” personality didn’t help matters either, let’s be real.

Much of the team making the game worked on Final Fantasy 15, with this connection being immediately obvious once you look at how Frey moves throughout the world. She operates at a similar speed to Noctis, able to dodge around enemies, clamber up obstacles, and sprint through towns in search of her next objective. That game also had a lot of problems, so with any luck Forspoken will seek to improve upon its shortcomings instead of being bound by them. Despite Final Fantasy 15’s issues, it had so much heart and personality holding up its inconsistencies that they were easier to forgive.

Forspoken seems to be going in the other direction and I’m not sure how to feel about it. I come to JRPGs for the stories and characters, often happy to forgive weird gameplay quirks if the unfolding tale manages to pull me in. That comes first, and always has for this genre. I think that’s a big reason behind Forspoken failing to set the world on fire. It’s both something nobody asked for and an outlier in its own genre. A gorgeous open world and engaging combat can be present and accounted for, but if the storytelling that drives it forward falls short then it all means nothing. This is Final Fantasy but without any heart and soul, seeking to become an entirely new experience while refusing to abandon what came before. I want Forspoken to be amazing, but everything I’ve seen just makes me want to switch off and have a big ol’ nap.