Back in 2017, something strange started happening in the Milky Way. Space pilots were being pulled out of supercruise, seemingly at random, and confronted by strange biomechanical ships. In a galaxy populated entirely by humans, suddenly seeing something so alien was a shock to the system. These peculiar, uncanny craft were unlike anything seen in the game before, and they were frightening too. Agile, powerful, and able to effortlessly destroy even skilled pilots. Players quickly learned not to mess around with these unwanted visitors.

We now know these curious interlopers are the Thargoids—an enigmatic insectoid alien race first introduced in the original Elite in 1984, but whose current incarnation remains a mystery. We don't know much about them, their motivations, or why they've decided to mount a full invasion on the human-occupied 'bubble' systems. Fleets of Thargoid ships are presently running rampant in the Milky Way as we speak, and will become a common sight. But in 2017, when I first met them, they were anything but. I'll never forget my first contact moment. 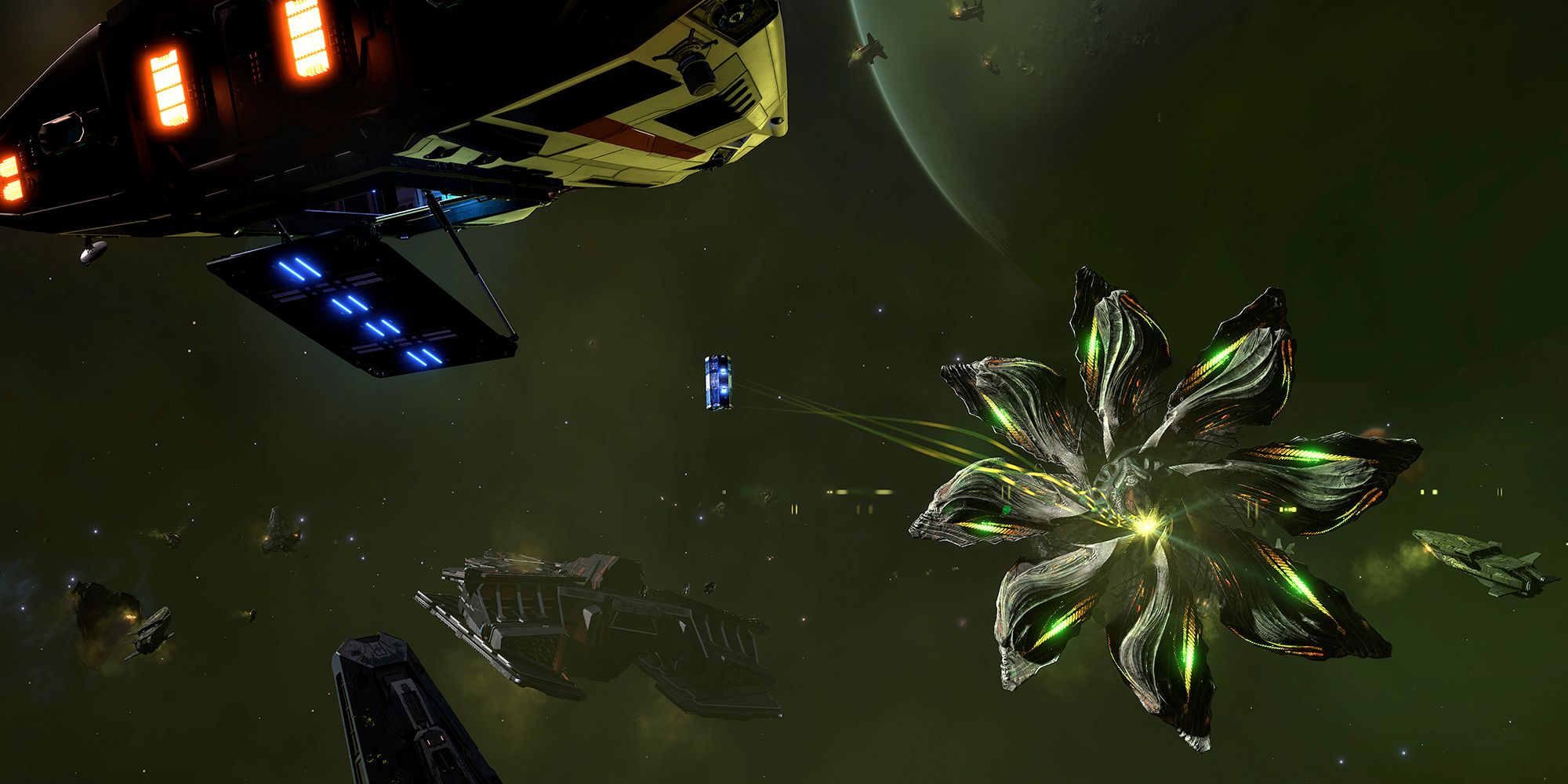 I was somewhere in the depths of space, in a distant, sparsely populated system. My scanner picked up a signal marked ominously as a 'non-human source', and I couldn't help but investigate. I didn't find any aliens there, but I did see the scattered remains of a destroyed starship with splodges of fluorescent green on them. I followed another signal and found more flaming wreckage surrounded by a green haze. These creepy vignettes were Elite players' first clue that something bad was brewing in deep space, and they were effective.

This should have been my cue to get the hell out of this cursed corner of space, but I couldn't help myself. I followed a third signal, and the inevitable happened: I was suddenly face-to-face with one of those freaky Thargoid ships. I watched and waited and saw it poking around in the remains of some more destroyed ships. Then I froze as this immense flower-shaped craft slowly turned to face me. It emitted an eerie green light and flew in my direction, then shot out a beam of light. I wondered if this was the end for me, but nothing happened. 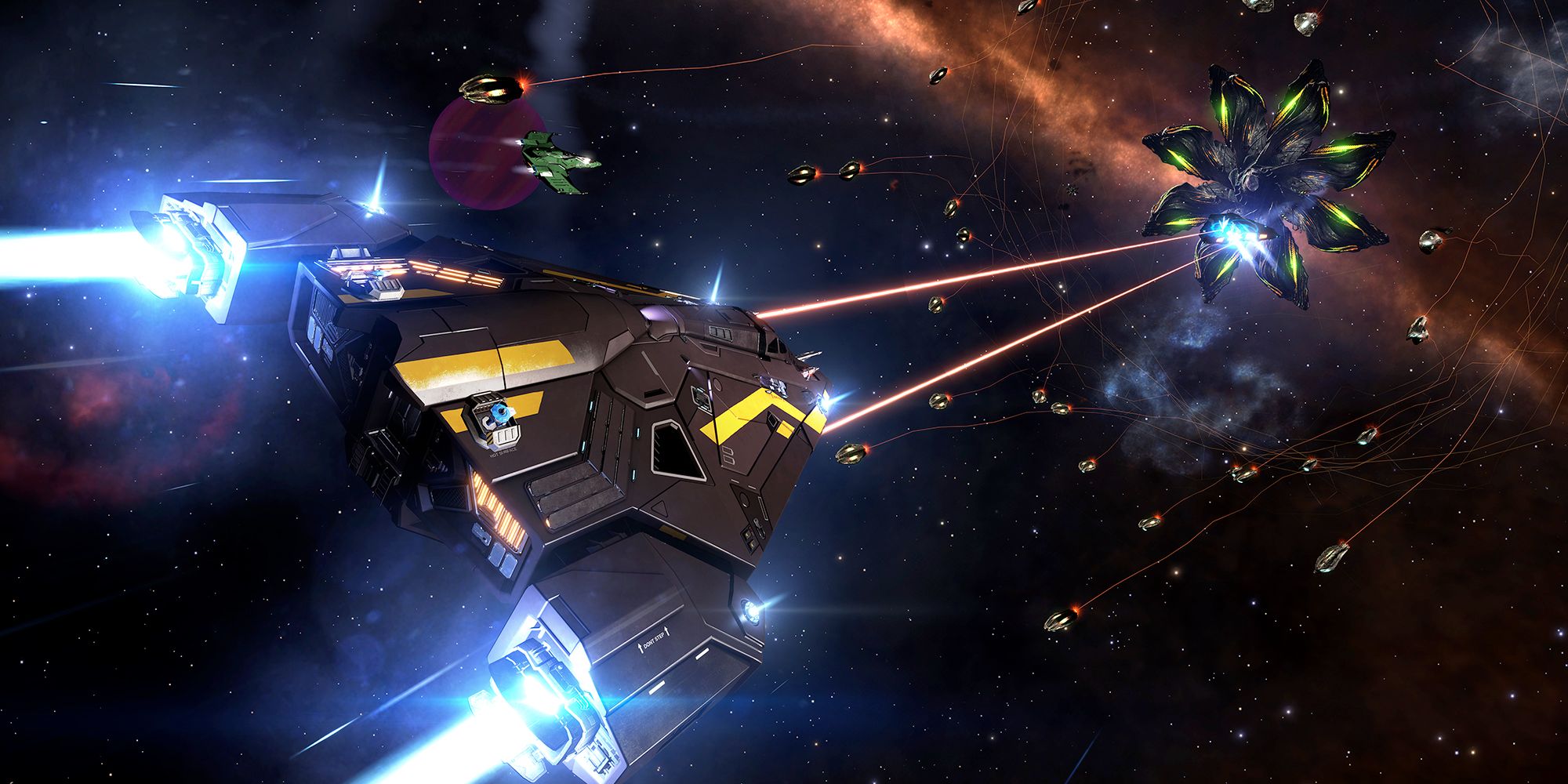 The Thargoid ship scanned me and flew away, returning to whatever had previously interested it about the floating derelicts. I could have attacked it, but I decided not to push my luck and travelled to another system. Somehow the inquisitive behaviour of this odd ship was more impactful and terrifying than if it had simply attacked me. Now the Thargoids are more aggressive, but this early appearance was the scouting stage. Turns out they were figuring us out, studying our technology and behaviour, readying for an invasion.

I was lucky. At the time there were 9 possible 'non-human source' signal encounters—and some of them were more violent. It was possible to alert bigger, scarier Thargoid ships that would instantly turn hostile. Unless you were seriously packing heat, the chances of surviving were slim to none. Also, if I stuck around, there was a chance the placid, neutral ship I encountered would eventually have gotten annoyed by my presence and blew me up. I dodged a laser there, and I'm glad my first Thargoid encounter was a bit more interesting.