I Was A Teenage Exocolonist’s Queer Rep And Space Puberty Is Sweet, Inclusive, And So Damn Real

There’s a moment in I Was A Teenage Exocolonist that stopped me in my tracks. It wasn’t a major character death or an emotional crescendo in its myriad storylines, but an almost inconsequential moment in my own personal development. I’m talking about puberty.

Northway Games’ stellar narrative adventure begins with our character arriving on a newly colonised planet. As a ten-year-old child, we are emerging on solid ground for the first time in our lives, having been born and raised aboard a colony ship hurtling through space. All the sights, sounds, and other such sensations are entirely new, and thus we approach them with expectant amounts of trepidation. Everything is an exciting, undiscovered possibility.

Much of the opening hours are spent wrapped up in a blanket of childlike innocence. Your parents do everything to protect you, while you’re given ample freedom to attend classes or begin developing skills that will come to shape your entire outlook in life. Darker secrets about colony life are hidden from view until the time is right, with those above us doing everything they can to protect the younger inhabitants from how dire things have become. 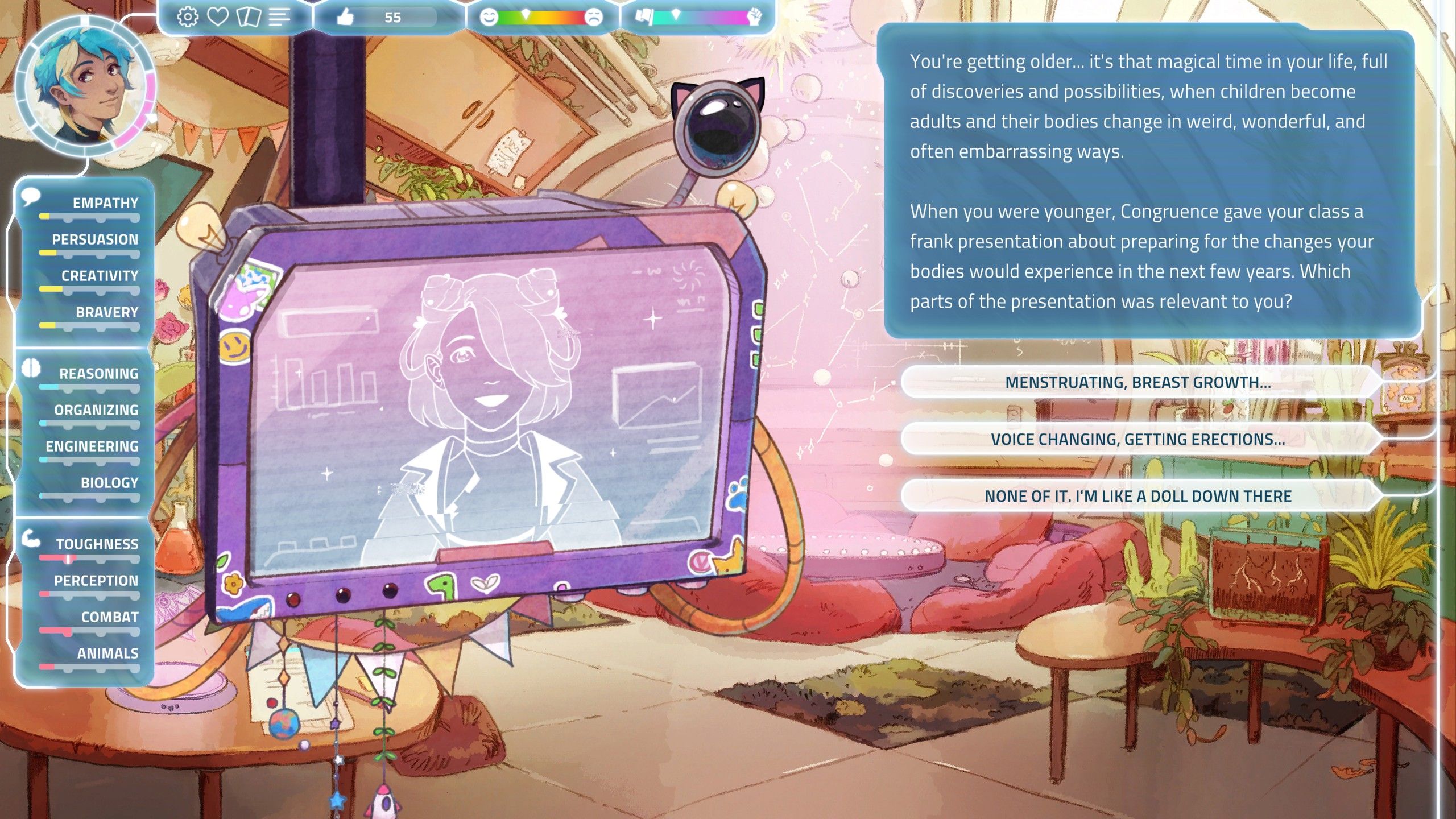 Then puberty comes along. I Was A Teenage Exocolonist does a wonderful job of chronicling the passage of time. Each year is split into several seasons with major events that underpin how the calendar ebbs and flows. Things are different on this new planet, but by establishing a sense of routine we are able to grow keenly familiar with it all. As expected, we approach our teenage years and the puberty monster comes knocking. It’s a normal thing, but how we decide to approach it as a player gives me a sense of queer agency that few games have.

I’m a trans woman, and went through puberty with a body and mind that didn’t feel like my own. I was trapped, and it wasn’t until my university years that I was able to break out of the closet and start moving towards a future where I could be myself. I didn’t have the resources to transition as a teenager, nor the knowledge required to even figure out my identity. I had to roll with the punches, which meant going through male puberty and all the bullshit that came with it. There were no blockers or the promise of hormone replacement therapy in sight, but if I could turn back the clock, I’d do everything to change that. Northway Games offers a way to explore that distant possibility, even if it’s only through a handful of scenes that the majority of players will view as a fun bit of puberty talk and nothing more. 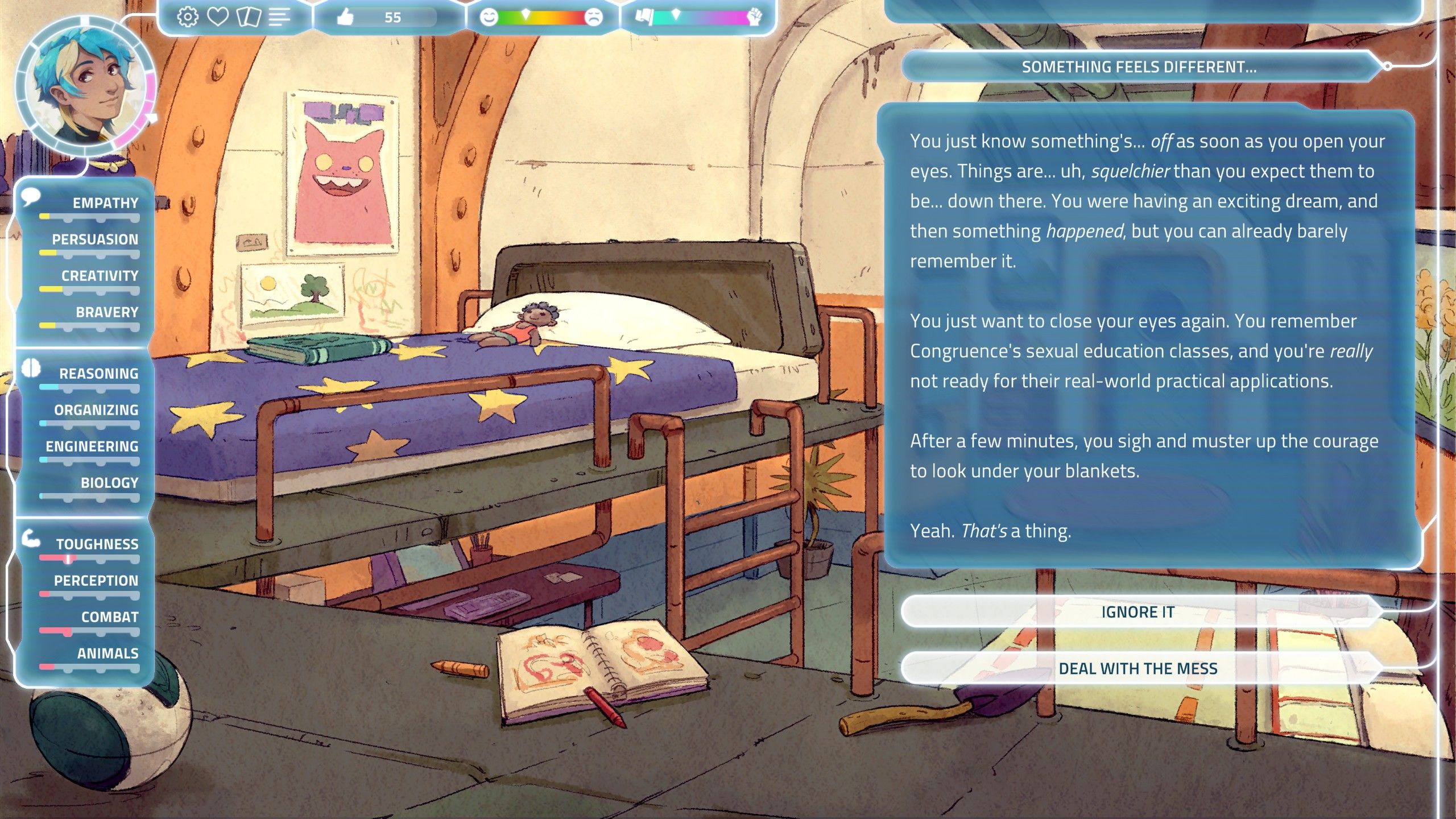 It all begins with a lecture from the colony’s artificial intelligence, which educates the growing population on what to expect from their minds and bodies as puberty rears its head. You can choose to hear about certain topics like menstruation, breast growth, voice changing, and erections – or avoid the conversation altogether if the subject makes you uncomfortable, or you’d rather approach the game as an aromantic/asexual protagonist. You can choose the relevant parts while ignoring the rest, deciding whatever will come to shape your identity.

Then comes the arrival of puberty itself. You awaken one morning and sense something is different. Your mood is unpredictable, your body is changing, and you have either had your first wet dream or your first period. Being able to make that small choice might seem insignificant, but to me, it provided a virtual alternative of a development I’ll never be able to relive or have played out in a way that makes me feel valid. 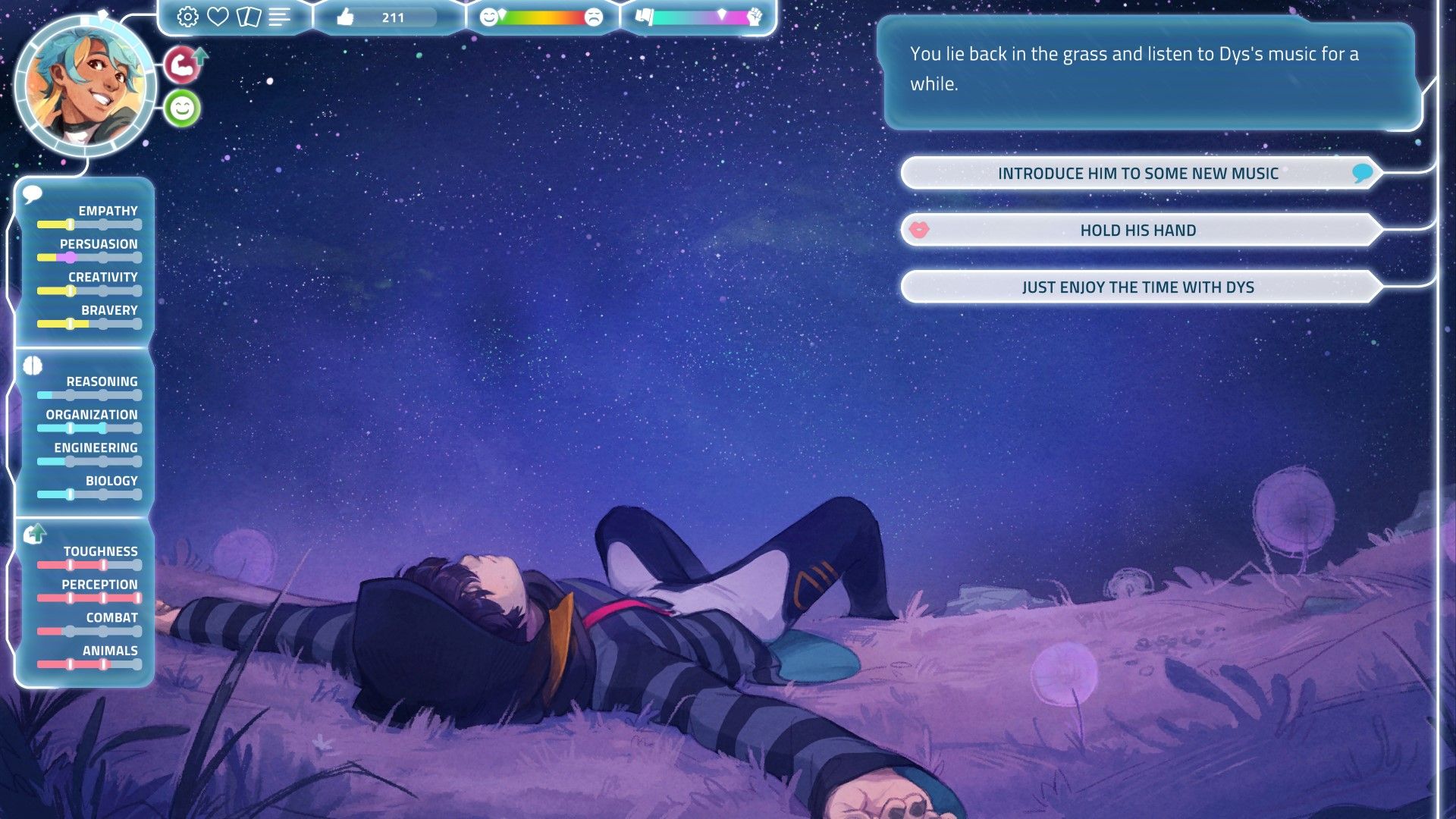 HRT is liberating and so welcome, but part of me will always resent the fact I wasn’t born as the right person and had to jump through so many hoops in order to catch even a glimpse of happiness. Of course, this perspective is unique for all trans people, and gender dysphoria differs for so many, and that’s beautiful. I’ve met trans people who have no issue with their appearance, nor do they have a desire to pursue hormone treatment, top or bottom surgery.

Some are happy by accepting and living in their new identity instead of pursuing a medical transition, while others can’t live without. I’m in the latter camp, and find myself walking a path that, right now, is far from reaching its end. I Was A Teenage Exocolonist recognises that, and understands how trans people will approach a character with the nuance to make their own choices and craft an identity that accurately reflects the user on the other side of the screen. I can pick my pronouns and alter my appearance at any moment, but this small conversation around puberty cements a definitive aspect of my avatar that sticks with me for the entire game. I might have a penis, vagina, or nothing at all – but the queer relationships I pursue and the gender I seek to live my life as is never once brought under the microscope. 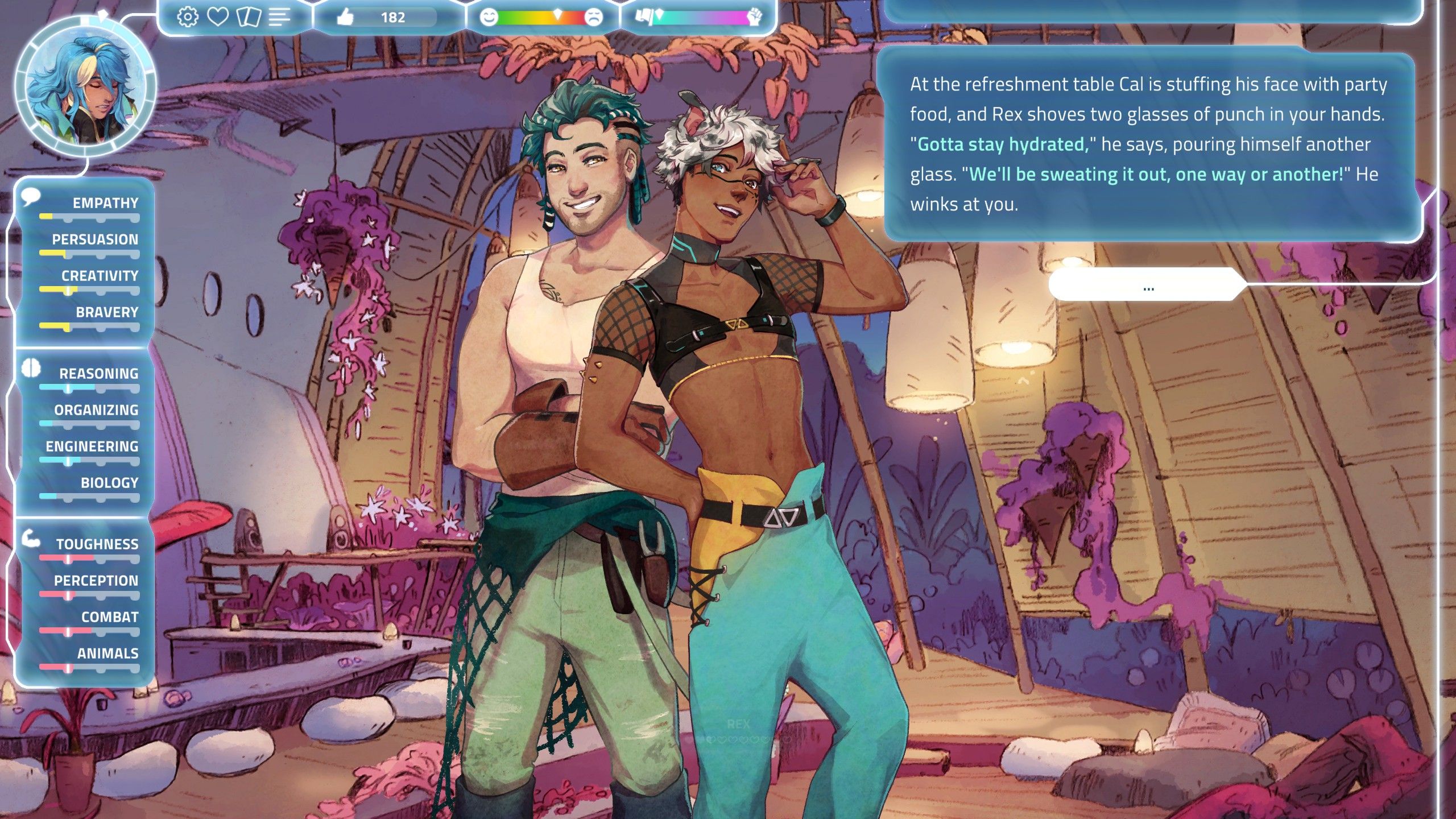 I’m confident that more and more games will approach gender and sexuality in a more nuanced way going forward, and I hope more of them are like this. Part of me feels selfish and weird for finding an unfulfilled sense of euphoria in going through a different kind of puberty in the virtual world, if only to see the development I was missing as a teenager that would have made me a much happier person at the end of it all. Of course periods suck and so do wet dreams, and the game isn’t afraid to make that much clear. It’s embarrassing, sudden, weird, and you aren’t given nearly enough guidance to deal with it all.

Coming out as a trans is a lot like that too, but I Was A Teenage Exocolonist allows me to solidify that part of my identity without all the bullshit. Here, I have so much more than blue hair and pronouns. I can be myself, even if that fantasy is playing out far beyond the stars.