I’m not an affectionate person. I don’t remember the last time I was. My friends go in for a hug and I become a stiff ironing board, and I’ve never been able to say “I love you” back to my parents. I only open up to those I’m really close to, so it’s safe to say I have some intimacy issues. I’ve never seen that mindset represented in a way where the need for those boundaries aren’t shunned or depicted as lacking love, but instead acknowledged and catered to – until I Was A Teenage Exocolonist.

In the opening hours, your parents tell you they love you, and you can say it back or nod along and skirt around reciprocating their affection. I wanted to express myself, especially given it was my first playthrough, but I was anxious that not saying it back would impede my relationship with them. In the past, it has done exactly that in my own life as friends and loved ones assumed that I was being stand-offish or cold for not wanting physical touch or saying mushy words. That always hurts, because deep down I do love these people back, I just can’t bring myself to say it because it makes me want to bury myself in a blanket and hide in fear of being judged.

I Was A Teenage Exocolonist understands people like me. I didn’t say it, but the relationship with my parents stayed strong. I worked in the gardens with my mam and helped my dad tend to the animal pens; we celebrated my birthday with excitement each year, and even when I rebelled and fought back against invaders and snuck out for expeditions, they forgave me and their love didn’t waver. It was unconditional, even if I wasn’t willing or capable enough to bite the bullet and say those three magic words. Everyone has their own boundaries, and I felt so welcomed into this world because it truly respected mine without ever berating me for it. 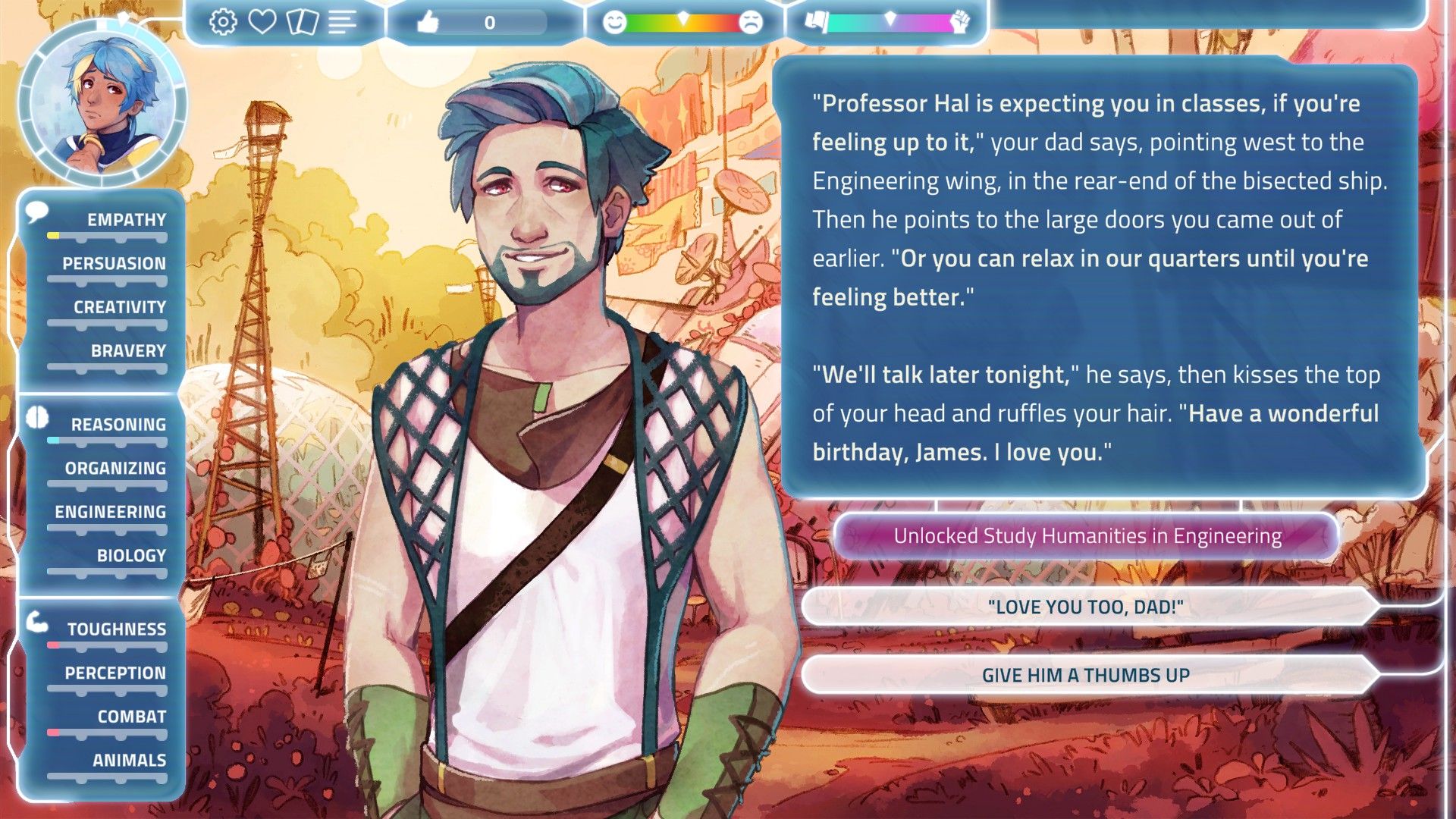 It’s not just apparent in the choices you make either, but also in the characters themselves. Tangent, for example, is cold and distant when you first meet her – she isn’t affectionate, doesn’t get sentimental, and struggles to open up due to genetic enhancements that restrict displays of emotion. Pushing for more just annoys her, so she closes up even more. That’s something I’ve done countless times. I need to go at my own pace, or it’s as though someone is invading my space and breaking down the walls with a sledgehammer. Just let me open the door when I’m ready. I saw a lot of that in Tangent who, after a while of bonding and communicating, began to let me in. And it wasn’t an immediate shift to a new person, but a slow build of comfort, the walls slowly falling as we fell for each other. I saw myself in that, in how I am with closer relationships.

But what really spoke to me is how Teenage Exocolonist handles death. During the pandemic, my grandma got cancer and passed away. In her last days, we couldn’t visit her. So, we called over Zoom and talked in video calls, only she wasn’t fit enough to say much back, if anything at all. It felt like my last chance to say I love you was lost, but that didn’t feel like me. It was more outside pressure, that maybe she wants or needs me to open up and push past my own boundaries. In the end, I never did say it, and I never got to give her a hug before she passed, and part of me feels guilty for it. But I know that I didn’t want to – I just feel guilty because I’ve been put down for my lack of want so much in the past. 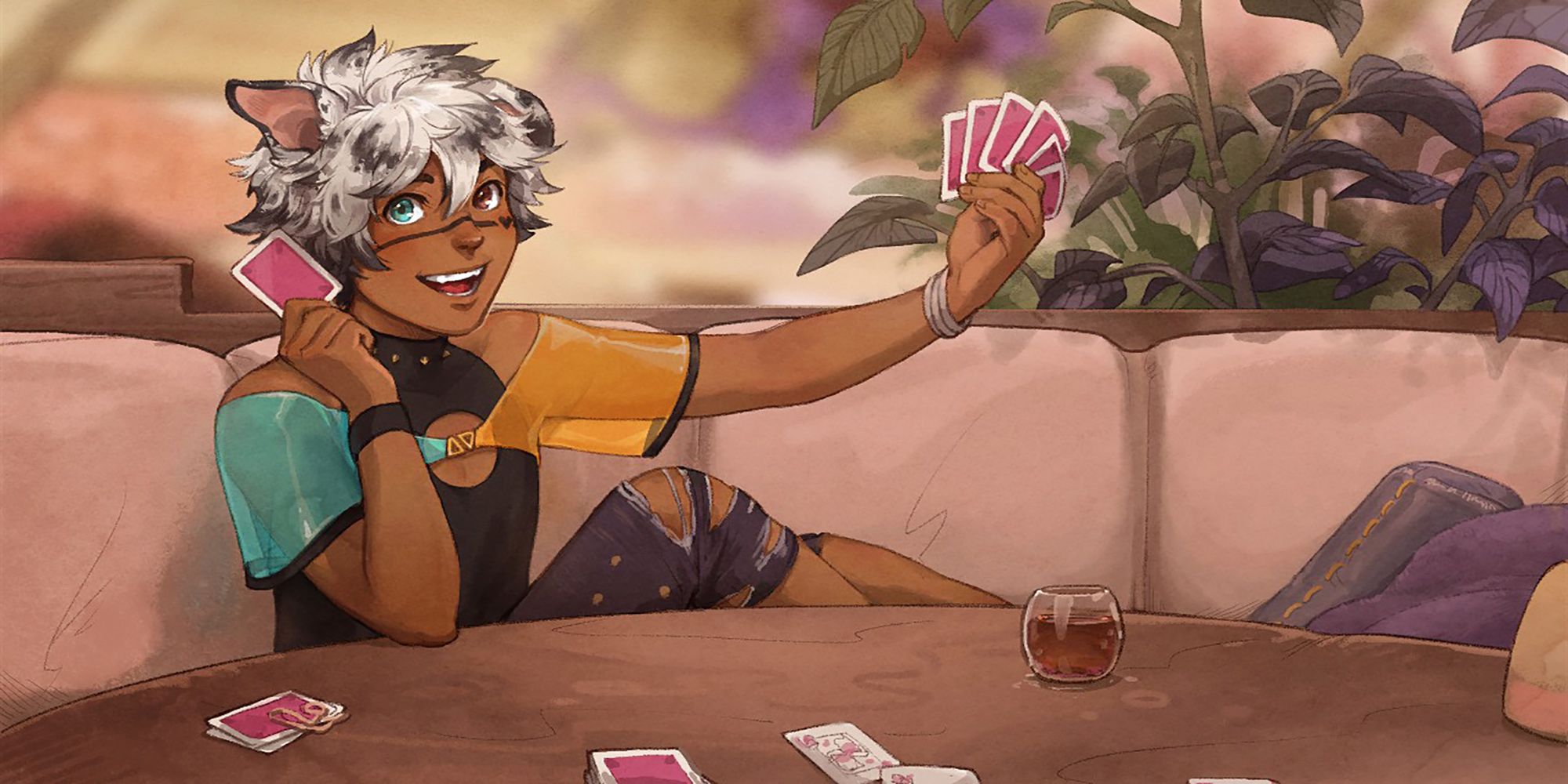 Likewise, I never said it to my mam in I Was A Teenage Exocolonist before she too passed away. Throughout my playthrough, I didn’t show much in the way of typical affection at all, instead taking up her passions and interests to show I was invested. That tends to be how I show I care in real-life. Odds are if we get along, I’ll have unpacked your hobbies to give them a try for myself, be it games, shows, music, or whatever else. I did that with my mam throughout my run, and we formed a tight bond – there was no regret, no awkward feelings of guilt, just contentedness with our mutual understanding.

And going back to Tangent, that understanding is how we fell in love. I kept visiting the science lab and helping her out with her projects, taking a genuine interest in her work, and that’s what sparked our friendship and eventual romance. My love language wasn’t shunned – it was embraced.

That felt beautiful. It’s not often people get my language of affection in real–life, but here I had an outlet to really be myself. Sure, my run ended horribly, but I wouldn’t change a thing about the bonds I made. When I come back for a second go, I think I’ll ride this bliss all over again, because it was so heartwarming to be accepted for who I am, rather than having to be who everyone else expected to form the bonds I wanted.