Hearthstone’s new Death Knight class brings some much-needed fresh ideas to the perennial DCCG. It has two main mechanics that separate it from the other classes. First, it uses a secondary resource pool, called Corpses, to enhance the effects of certain cards. Whenever a friendly minion dies a corpse gets added to the Death Knight’s pool, which carry over between turns and can be spent by playing corpse-keyworded cards. The strategy of saving and spending corpses adds an interesting layer of complexity to the class and makes decks more demanding to pilot.

Another difference between Death Knight and other classes is the rune system, an additional type of restriction to deck building. Runes are the main resource for the Death Knight class in World of Warcraft, but in Hearthstone, they represent each of the Death Knight’s three specializations – Blood (red), Frost (blue), and Unholy (green). When you build a Death Knight Deck, you have to first decide which combination of three runes you want to use. You can have three of a kind, one of each, or any combination of two and one, but no more than three. When choosing the cards to add to your deck, you can only use the rune cards that match the available runes you already have.

Every Rune card has between one and three runes of the same color. If you have at least one Blood rune in your deck, then you can use as many one-rune blood cards as you like. You need at least two of the same runes in your deck to use any two-rune card of a matching color, and the same for three-rune cards. Unlike other classes that allow you to use any class-specific card while deckbuilding, your pool of available Death Knight cards will be significantly limited by the runes you choose to use.

In theory, this system allows the Hearthstone developers to create a wider range of powerful cards and unique deck types without damaging the balance of the game. Three-rune cards often have powerful effects, but by using one you’re sacrificing your ability to use all the cards that don’t match its rune color. Building decks around your three chosen runes also adds identity to your decks. Archetypes have always existed in Hearthstone, but this system adds a degree of class fantasy and recognition to each deck. Rune archetypes make Death Knight feel like much more than just one new class.

It sounds complicated, but the deckbuilding process is intuitive. When you add a rune card to your deck, your deck’s runes automatically update to match, and the cards you can no longer use by consequence are marked out in your library. It’s impossible to screw up and make an illegal deck, but you’ll only ever have access to the cards you can actually use. 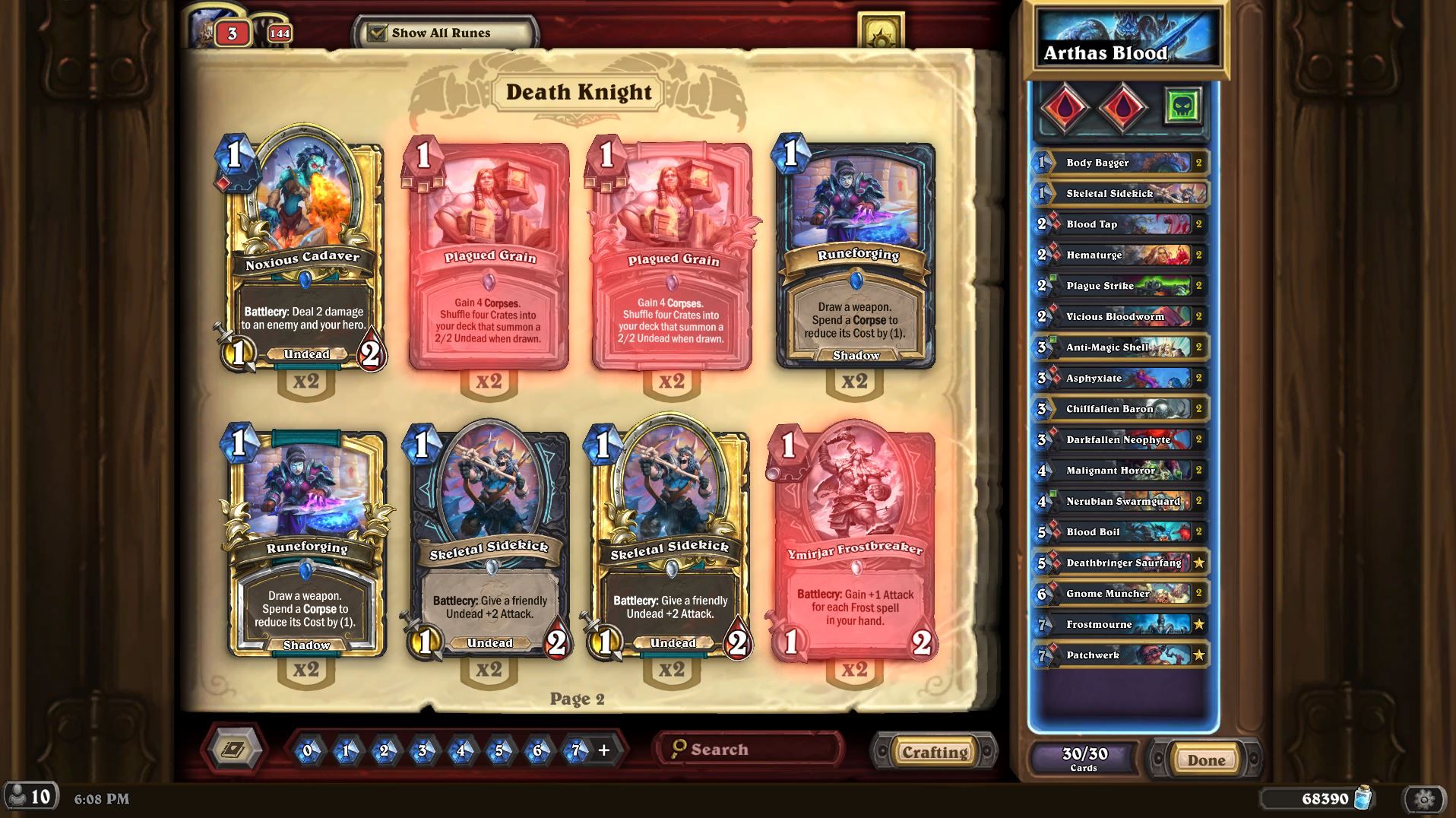 I like this new approach to deckbuilding, but more importantly, I hope the people that make my decks like it. I mean, it’s not like I’m ever going to use it myself. What am I going to do, make a good deck that wins games? I’ve got no business getting into the kitchen, I’ll leave the cooking to the professionals.

Deckbuilding is horrifically intimidating. I can identify synergies and drag 30 cards onto a list easy enough, but it takes so much more than that to build a competitive deck. You have to have a deep understanding of concepts like mana curve, fundamental turns, and power values. You have to extraordinary patience to test decks repeatedly with minor changes over long periods to collect useful data. You also have to have an in-depth knowledge of the landscape of the meta so that you are crafting decks that counter popular playstyles instead of feeding into them. It takes an expert that understands all of the complexities and nuances of Hearthstone to make a winning deck. Fortunately, you don’t actually have to know anything about deckbuilding to play (and win) Hearthstone.

The new deck building system is neat, but I’m never going to use it. Any time I want I can visit HSReplay or Icy-Veins and see a snapshot of the Hearthstone communities entire collective knowledge, choose the deck that’s proven to win the most games, and play it, without needing to do an ounce of deckbuilding. If the rune system keeps those wizards that whip together all the good decks entertained, then I’m happy for them, but the change wasn’t for me or any of the other filthy casuals that let someone else do all the heavy lifting.