How Classic Characters Found Their Voices in Nickelodeon All-Star Brawl

Nickelodeon All-Star Brawl has fizzled in gaming circles since its initial release late last year. The platform brawler featuring a multitude of classic Nickelodeon characters found itself back in the headlines again with the oft-requested addition of voice acting to the game. This update was looked upon hopefully by those who stuck around as a potential turning point in the game’s trajectory.

Naturally, having voice acting in a game featuring so many nostalgic characters was a major goal from its inception, but the developers at GameMill Entertainment wanted to solidify the gameplay first and foremost before moving on to other areas. Once the basics of the game were in place and where they wanted them to be, they began the heady task of adding vocal talent. That’s where Douglas Carrigan and his team at VoiceWorks Productions came in.

Carrigan, the game’s character voiceover director, felt right at home with the job. He’s been in the voiceover business for a long time, having directed voices for TV shows, games, toys, and theme parks, among other things, for Nickelodeon and a variety of clients. That being the case, he already had a familiarity—and in some cases, close friendships—with many of the actors he knew he would be working with. 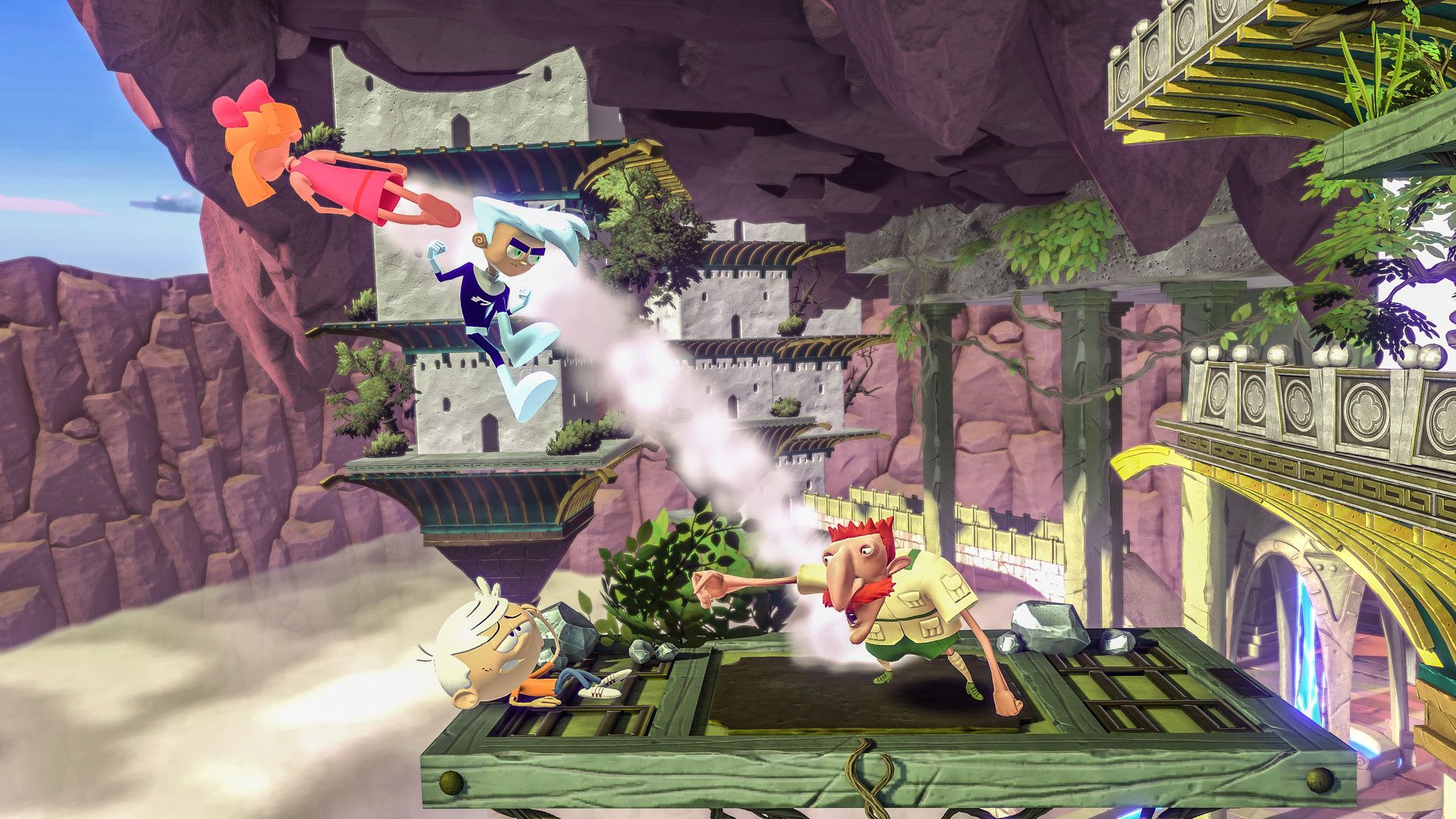 The first task involved going through the fighter roster and determining which ones have currently established voice actors who might be willing to revisit their characters. “I can just look at the character list, and I already know who is playing [who],” Carrigan states. “I know who the actors are. I know who has already passed away, or who is unable to voice a character anymore for whatever reason.”

On being reached out via their agents to reprise their roles, many actors were excited to return. “These actors love to keep their characters going and voice them beyond the series or feature,” says Carrigan. For him, working with these veteran actors, some of whom he’s worked with for decades, is like a high school reunion. “We’ve all grown old together.”.

The game is a who’s who of iconic Nickelodeon voice acting talent, including Tom Kenny as SpongeBob and Dog, Billy West as Ren and Stimpy, Richard Horvitz as Zim, David Kaufman as Danny Phantom and Francesca Marie Smith as Helga, just to name a few.

It’s clear by listening to the dialogue that the game’s writers did their homework on these classic characters; they’re constantly spouting off famous lines and catchphrases. Sometimes, additions are even made based on an actor’s suggestions. “It’s so great to have that actor that did six hundred episodes of the series go, ‘Oh, I used to do this thing’, and I’m like, ‘Yeah, let’s record some of that!’” says Carrigan. “They know their characters so well. They bring a fuller nuance to that role. It’s always a fun day at the office when those are the guys and gals you’re in the booth with.” 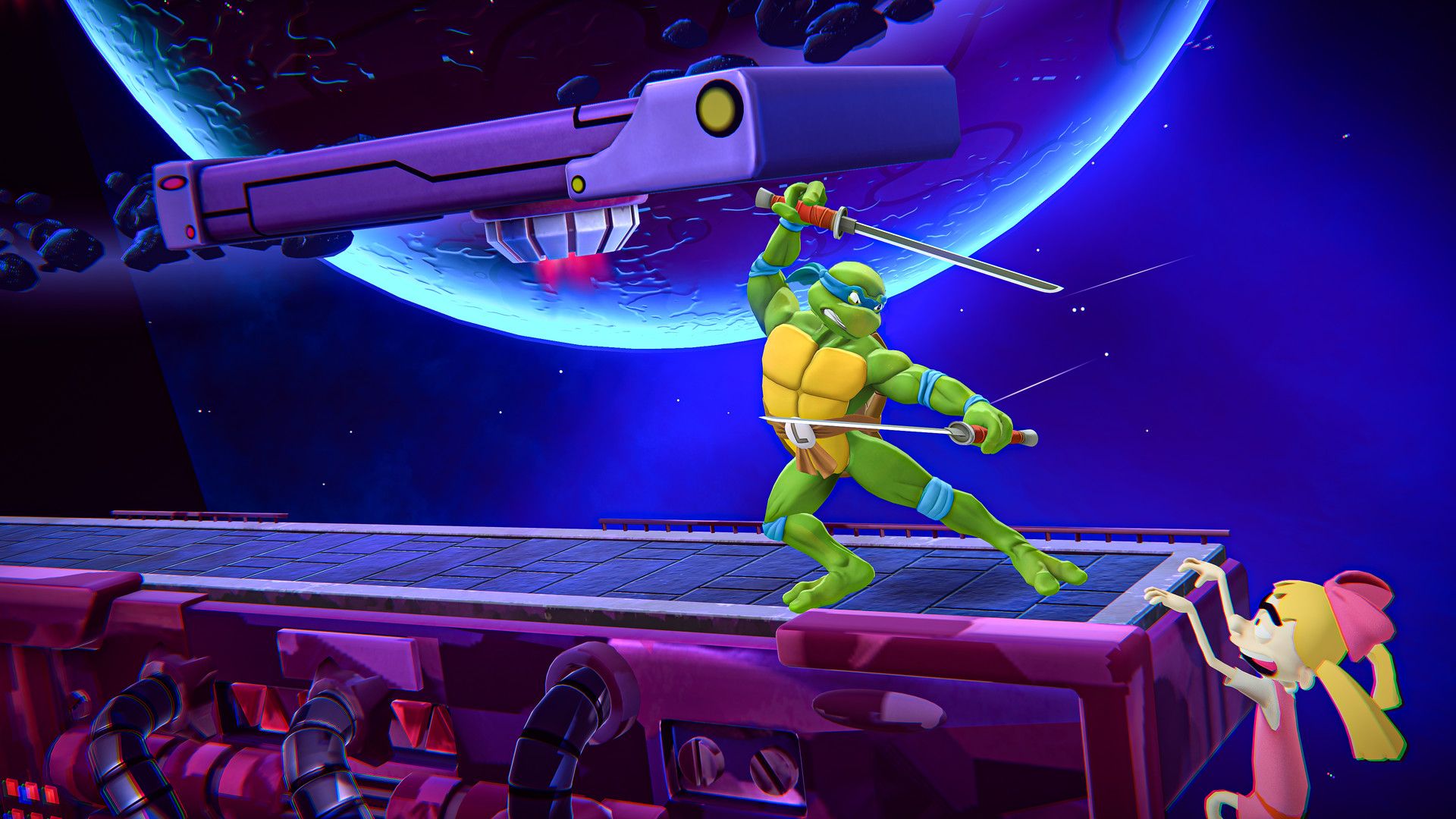 Sadly, having passed away since their series ended, the likes of James Avery as Shredder and Gary Owens as Powdered Toast Man were unable to return. When such situations arise, a soundalike is brought in. For some characters, Nickelodeon has an actor already in place. For others, they trust Carrigan, who has cast hundreds of soundalikes in his career, to find one for them.

How does a voice director determine if an actor has potential as a character’s soundalike? “It’s my ear,” Carrigan answers. “You’re listening for the right ‘notes,’ [the] correct read, the right emotion, the right sound.” Of course, knowing the right emotion and sound requires the voice director to have a deep knowledge of the character as well. “In the case of an Aang [who has been recast due to the actor hitting puberty], I have seen every single Avatar: The Last Airbender [episode] at least two or three times. When the original series was running, I directed a few games for that and for [The Legend of] Korra. I’m very familiar with the IP itself, the characters.”

For soundalike casting, Carrigan starts by gathering some previous dialogue from various mediums that showcases the character’s vocal range. “It being a video game, you want to hear them do some quick, one-off dialogue, but you want to hear them as that character through a wide emotional range,” he says. “We send those out to agents and say, this is what we’re looking for. We’ll get a bunch of reads back. First thing, I want to hear what I call the ‘voice print.’ Does this actor sound like this character?”

During initial auditions, the actors will try to mimic the lines as closely to the original performance as possible. Then, they will be given some new dialogue of which there is no point of reference to see if they really ‘get’ the character. The handful of actors who make it past this step are then directed even further, seeing how they can truly capture the nuances of the character in various emotional states. 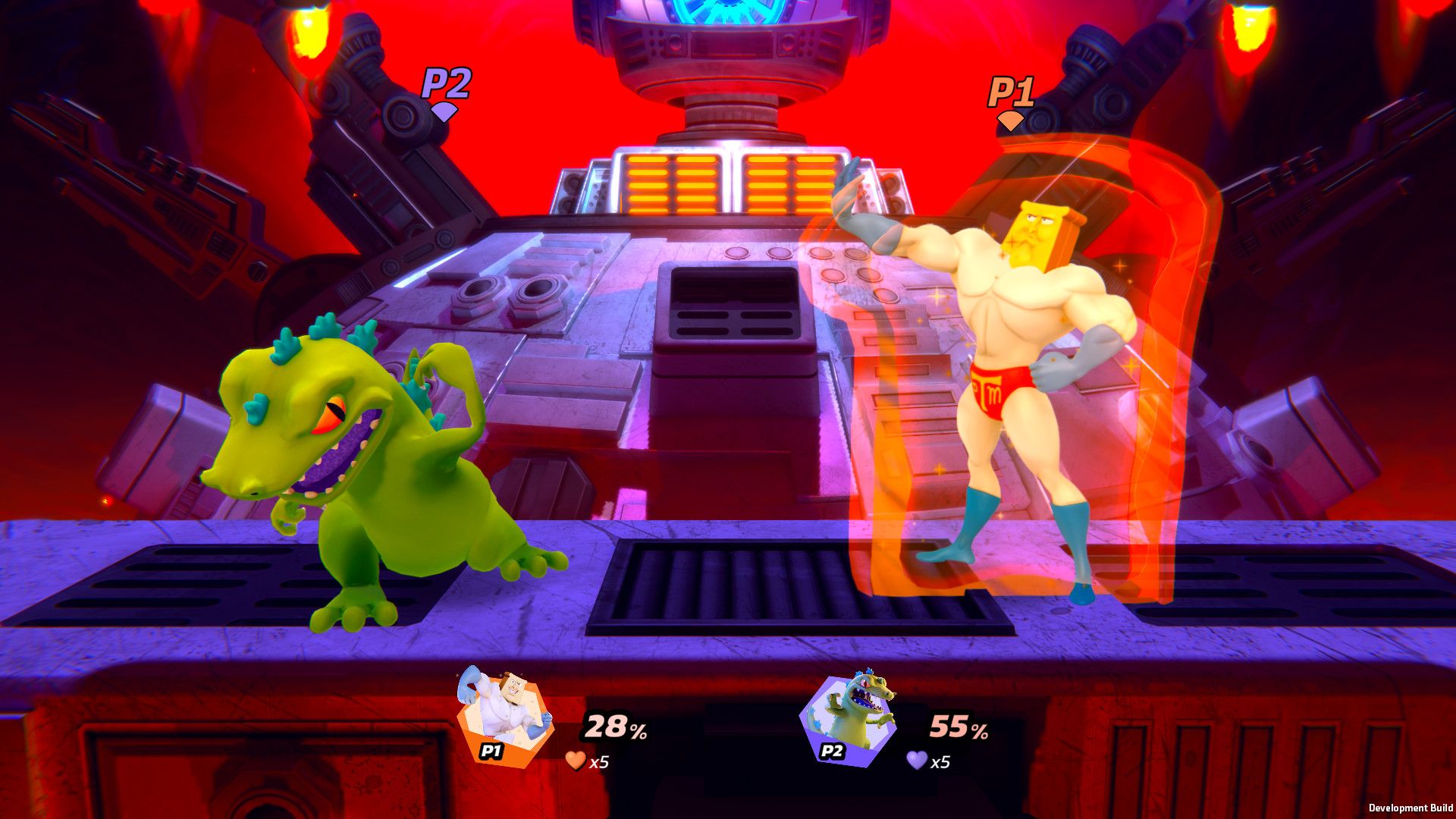 One character that Carrigan found a particular challenge to recast was Oblina from the classic Klasky-Csupo series Aaahh!!! Real Monsters. “Unfortunately, original actress Christina Cavanaugh is no longer with us,” he says. “If you really break down what Christina did with that character originally, it’s so nuanced. She has such an interesting, bizarre range. That’s one of those characters that lives in an actor. [Soundalike] Alex Cazare did a really phenomenal job. She worked through the entire session to really make sure she did the character justice.”

Once VoiceWorks finds the perfect soundalike for a character, they send the auditions back to Nickelodeon for final approval, and the actor is booked. Whether the original actor or a soundalike, nailing a character’s emotional range is essential, especially in a fighting game, where the majority of the lines are yells and grunts. Some characters, such as Reptar (voiced by Fred Tatasciore), are almost nothing but growling and roaring.

Carrigan is no stranger to voice directing games with intense acting. “I’ve directed some of the Saints Row games, some war games, things like that,” he says. “With this, because it’s more cartoony fun, it’s not as intense, probably no different than any grunts or groans they would have done in their series work, but just more in a row at one point. It’s more specific, too. You’ve got very, very quick moves or reactions or blocks, so you want to paint them each individually. I will admit, I think it’s the actors’ least favorite ‘fun’ part of a recording session. When I’m doing a game like Saints Row, we call it the ‘pain pack.’ You’re on fire, you’re being shot, you’re being stabbed, your head’s being crushed by a bulldozer. Thankfully it wasn’t anything that intense with this. My job as a VO director is also to protect the actor and not make them do more than we need, not making them kill their voice.”

As mentioned from the outset, gathering a large group of iconic Nickelodeon voice actors, finding the perfect new voices for classic characters, and living up to fan expectations is a heady job, but despite all the hard work involved, when all is (literally) said and done, it’s a fun time for everyone involved.

“There’s always joking around, especially with guys you worked with so much,” says Carrigan. “A lot of outtakes that nobody will ever hear. There’s always something that cracks everybody up. You’ve got actors who want to be there. We want to be there. It’s fun material. It’s a good time. There are characters that kids have grown up with. We’re trying to bring a little joy to people’s lives. These are the projects that I love the most. Nickelodeon has done such an amazing job over the years of building a stall of great characters. Total kudos to everybody involved. Just a great group. I love working with everybody, plus the crew at Nickelodeon as well. Just a really great title to work on.”

The question now is, what does the future look like for Nickelodeon All-Star Brawl, particularly on the voice acting front? Hugh Neutron of Jimmy Neutron fame was recently released as a new DLC fighter, voiced by original actor Mark DeCarlo. Everyone’s favorite cartoon wallaby Rocko is set to arrive soon as well, and if Hugh is any indication, hopefully the vocal talents of Carlos Alazraqui will be right there alongside him. Carrigan can’t definitively say one way or the other, but we’d say the odds are looking good.

And if the game does well enough that the developers and Nickelodeon seek to expand it further with more downloadable characters, Carrigan and his crew are eager to help them find their voices as well. “We’re ready,” says Carrigan. “The phone is there. Call us. We’ll do it.”