Horizon Zero Dawn: How To Defeat A Fireclaw

Fireclaws are arguably the most powerful machine in the Horizon Zero Dawn franchise. They were added as part of the Frozen Wilds expansion and when you finally come face to face with one, you’ll wish you were facing a Thunderjaw instead.

They’re big, they’re fast and they’re extremely powerful. Luckily for you, you don’t run into them right away in The Cut (The Banuk Territory added with the expansion). Instead, you get to find your feet in the frozen environment and learn a lot about mysterious events happening there before you have to fight one. Here’s everything you need to know about fighting a Fireclaw.

The Abilities Of A Fireclaw 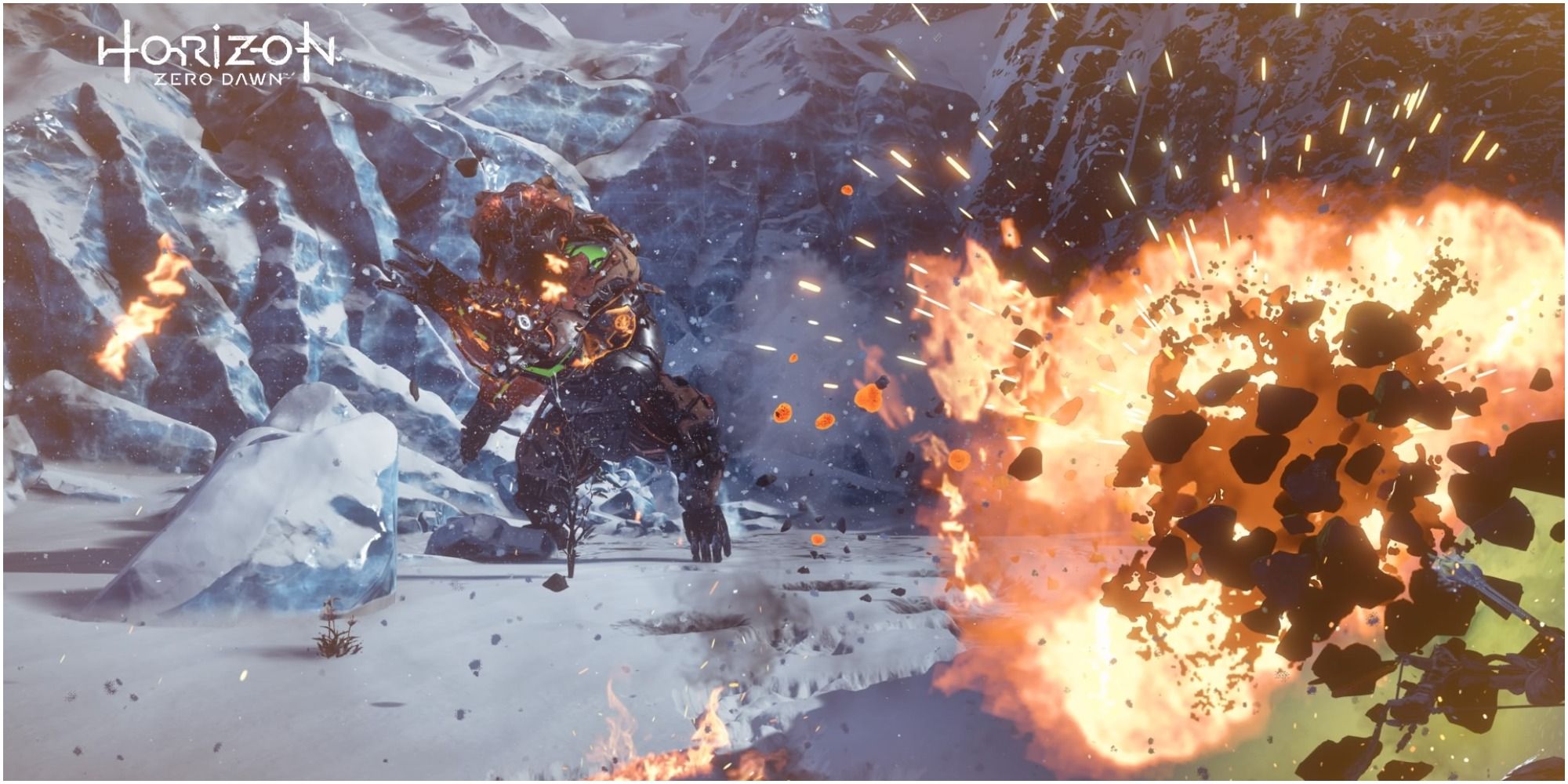 The Fireclaw has a number of different abilities. They are:

Powerful Claw Swipes – It will lunge for you and swipe its large claws. Often the claws are engulfed in flames when they swipe.

Body Slamming The Ground – It will get close to you then flip around and slam its back into the ground, hoping to crush you in the process.

Creating Lava Eruptions From The Ground – Fireclaws can create mini lava eruptions on the ground in a sporadic pattern near where you are standing. Even if you are not in direct sight of the Fireclaw, it can still seek you out and create them. The mini-eruptions also create a brief moment of flaming rocks raining down on the area.

Self-Erupt – Fireclaws can spontaneously combust and send a wave of fire out from themselves, without damaging themselves in the slightest.

Hind Leg Walker –  A Fireclaw can stand on its hind legs and it moves surprisingly quickly whilst it does.

Rock Shield – As if fighting an angry, flaming, and massive machine wasn’t hard enough, it can also shield itself. It will lift up a large slab of rock (seemingly out of thin air) and shield itself with it before throwing it at you with extreme force.

Flaming Boulders – The Fireclaw can also fire flaming boulders at you with extreme accuracy.

Flaming Attacks – As the name suggests, a Fireclaw is a machine that has a lot of elemental flame attacks. One of the most damaging ones is its ability to fire out a steady stream of flame that reaches over a long distance. It’s a lot like a flame thrower. 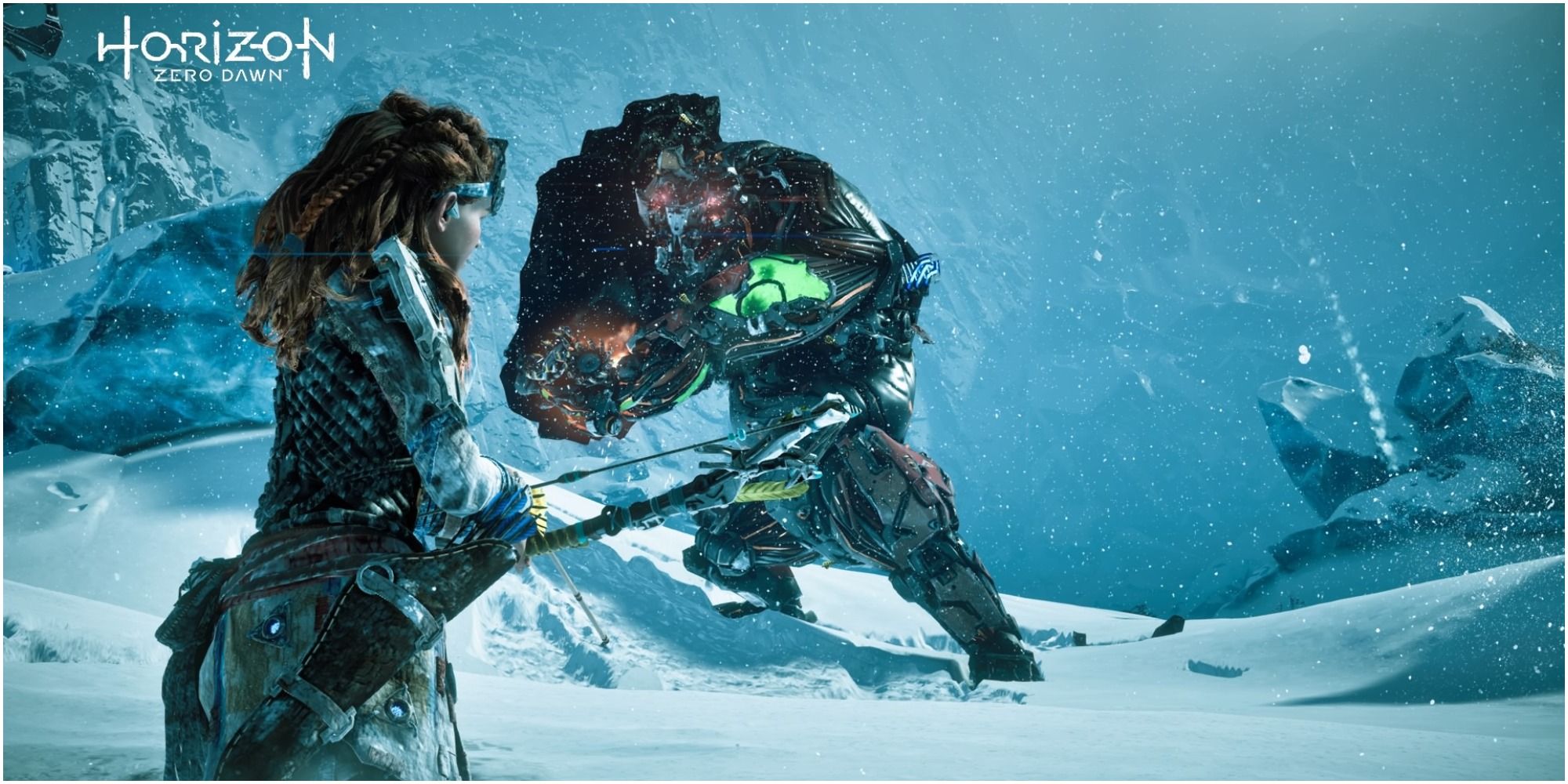 Certain ammunition types will offer an advantage in the fight. Here’s what you need to know:

Fireclaws are weak against Freeze-type ammunition. If you repeatedly fire this ammunition at the machine, then the elemental counter above its head will fill up and it will eventually freeze. Whilst a Fireclaw is frozen it’s vulnerable to attacks and you can cause quite a bit of damage.

Hardpoint arrows are one of the best arrow types in the game and they’re very useful against this machine. They have a rapid re-load speed and you can cause damage whilst you stay at a safe distance.

Tearblast arrows may have a slower reload speed than other arrows, however, they can be useful on a machine this fierce. You can shoot this arrow type from a good distance away and if aimed correctly, it can remove parts of the machine that will inhibit its abilities.

Collecting Bluegleam will let you purchase powerful weapons from some Banuk Merchants. These can be helpful in fighting a Fireclaw. 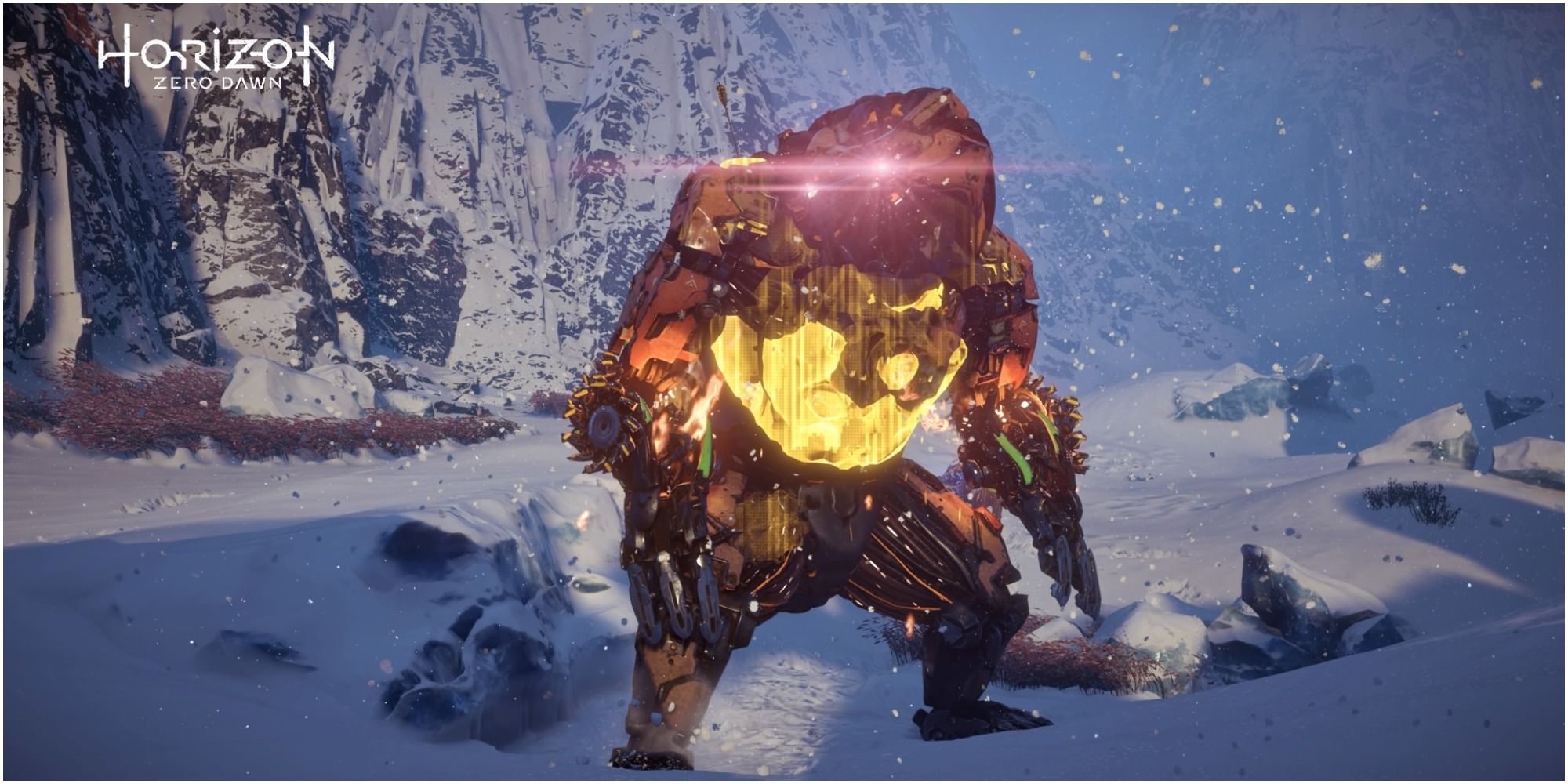 As with all machines in the game, scanning a Fireclaw with your focus will highlight its weak spots for you. Also, you can use your notebook to read up on valuable information about this machine.

A Fireclaw’s biggest weak spot is on its chest. This is the Fire Unit and it’s weak to all ammunition types. If you destroy this then there will be a large, fiery explosion that will set the machine alight and take a large chunk of its health away. The downside is that the explosion can damage you too.

TIP: Drink a fire potion before attacking this piece. If it explodes, the potion should protect you from getting damaged.

The next weak spots that you need to focus on are the Power Cells located on their lower back. They are small compared to the rest of the machine so you will need to be precise with your shots.

The Fireclaws will rarely turn their backs on you, so you will need to find a way to get behind them and get the shots in quickly. These too will remove a chunk of the machine’s health.

Tips To Defeat A Fireclaw 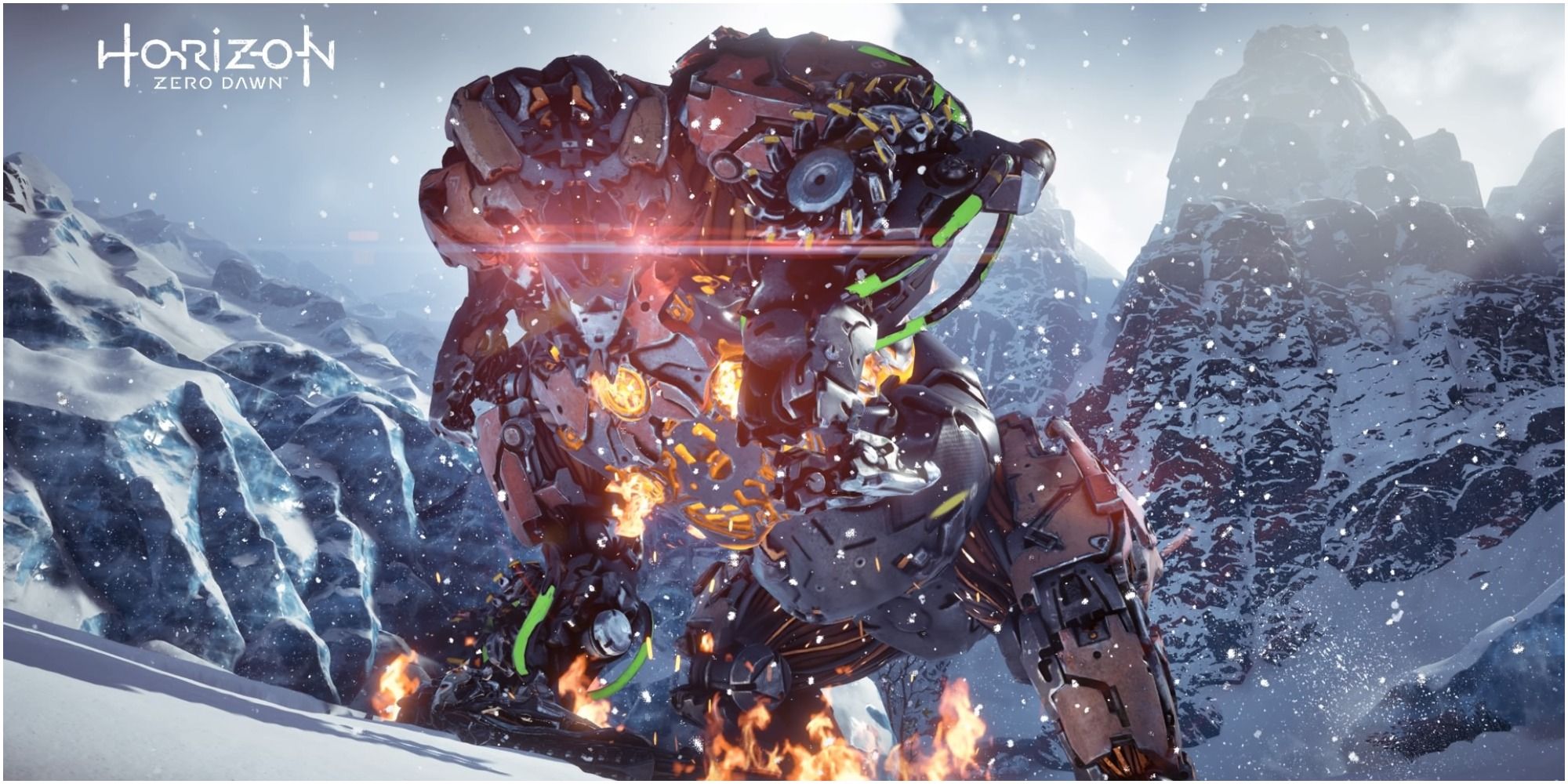 If you have it, then you really should equip your Shield Weaver armor as this will make the fight less painful. For those of you who haven’t gotten the armor then you need to equip one that will protect you from a variety of attacks. There are a lot of good outfits in the game and each of them has unique properties.

The melee attacks of a Fireclaw are as dangerous as the elemental attacks. The armor that can protect you the best would be the Nora Survivor Heavy.  The best place to find that outfit would be in Meridian.

Stock Up Your Ammunition

Fighting a Fireclaw will be intense and very fast, you’ll rarely have a moment to craft more ammunition. If you do need to craft arrows mid-fight then there’s a good chance that the Fireclaw will land a heavy blow and it will cost you a chunk of health.

To avoid having to craft more you should do this all pre-fight. Once you’ve discovered a Fireclaw as part of the Frozen Wilds main storyline, the Fireclaw sites will all be marked on the map. This way, if you are getting close to one of the sites, you can stop and craft all your ammunition until you’re full.

Tag And Highlight The Fireclaw With Your Focus

For one of the largest machines in the game, they can move very fast. This means in battle it can be easy to lose sight of it and this can give the Fireclaw the upper hand. Use your focus to highlight the machine then tag it.

This way you will be able to see the machine’s location even if it’s not in your direct line of sight and you can then plan a counter-attack or even dodge an incoming one.

Stock Up Your Health To Max.

It’s a big machine that can kill you in seconds if you’re not careful. Having your health bar and health inventory filled to maximum capacity is a good idea. This way, when you get damaged you will be able to heal yourself numerous times.

Medicinal plants are difficult to find in The Cut. The best place to gather a lot of them quickly is to go back to the Nora homeland of The Embrace. Along the banks of the River near the Nora Hunting grounds, there will be a lot of plants.

Fireclaws are dangerous and you cannot go all in and hope to come out alive.  This is why dodging is vital as it can quickly get you out of being in a lot of trouble. Fireclaws can repeatedly attack you without pausing, this can quickly kill you if you’re not careful.

By dodging out of the way you will buy yourself enough time to replenish your health if you need to and it can break the machine’s chain of attacks.

The machine can cover a vast amount of space in just a few strides, especially when it’s standing on its hind legs. Most of the Fireclaw’s attacks rely on you being close to them so your best way to stay alive for longer is to keep your distance.

The ammunition types that the machine is weak to can be used from a distance. The machine does have ranged attacks so you still need to be ready to dodge out of the way but it’s safer to fight this one from a distance.

A lot of the Fireclaw sites are placed in areas that are quite enclosed. This can make battling them very difficult as you can easily find yourself trapped against a tree or pinned against a wall.

How To Defeat A Fireclaw 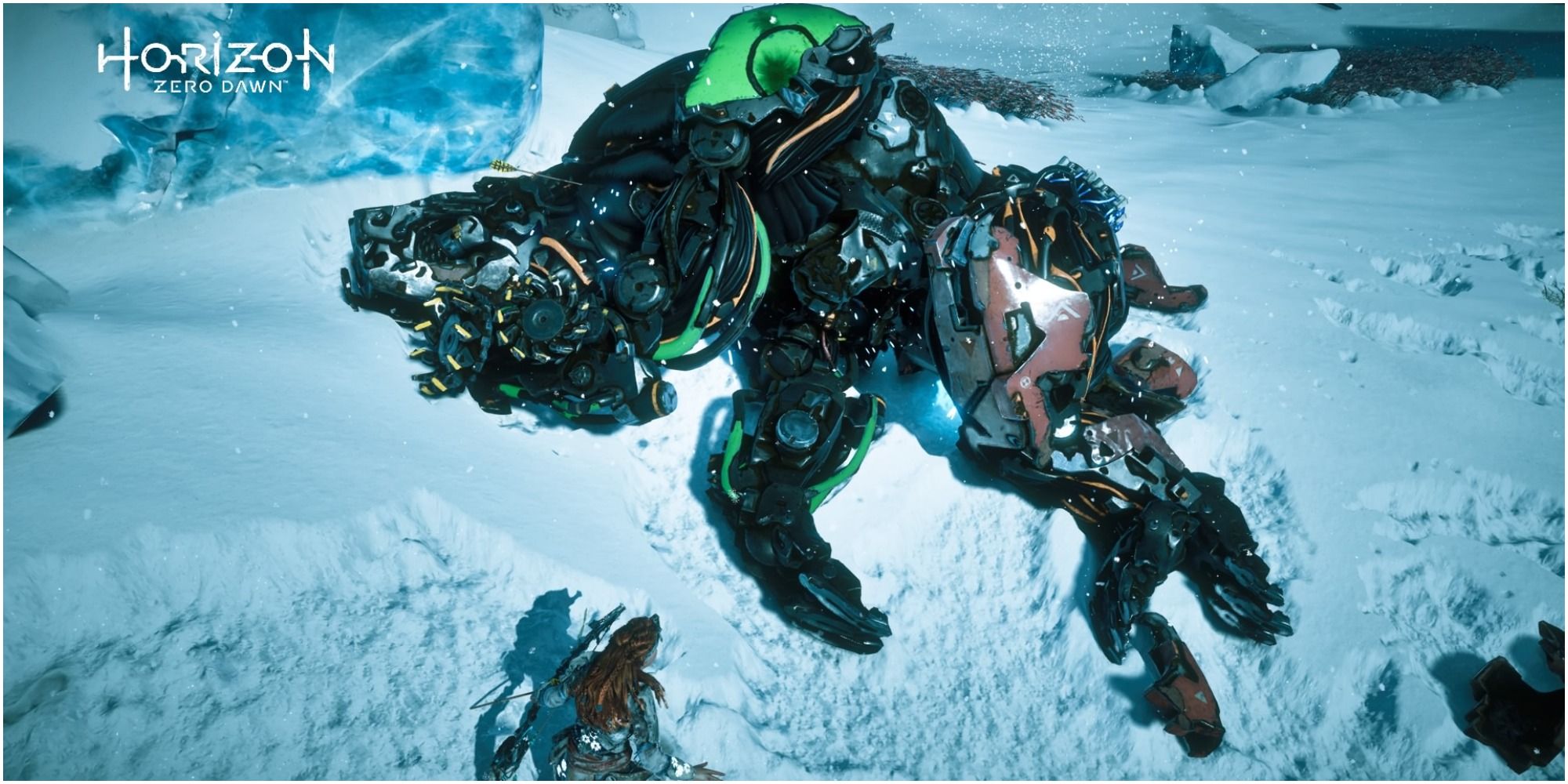 These general hints and tips sum up the most important things to remember before going into battle with a Fireclaw.

If you follow all the tips and tricks in this guide then hopefully, your next face-off with a Fireclaw will be easy!