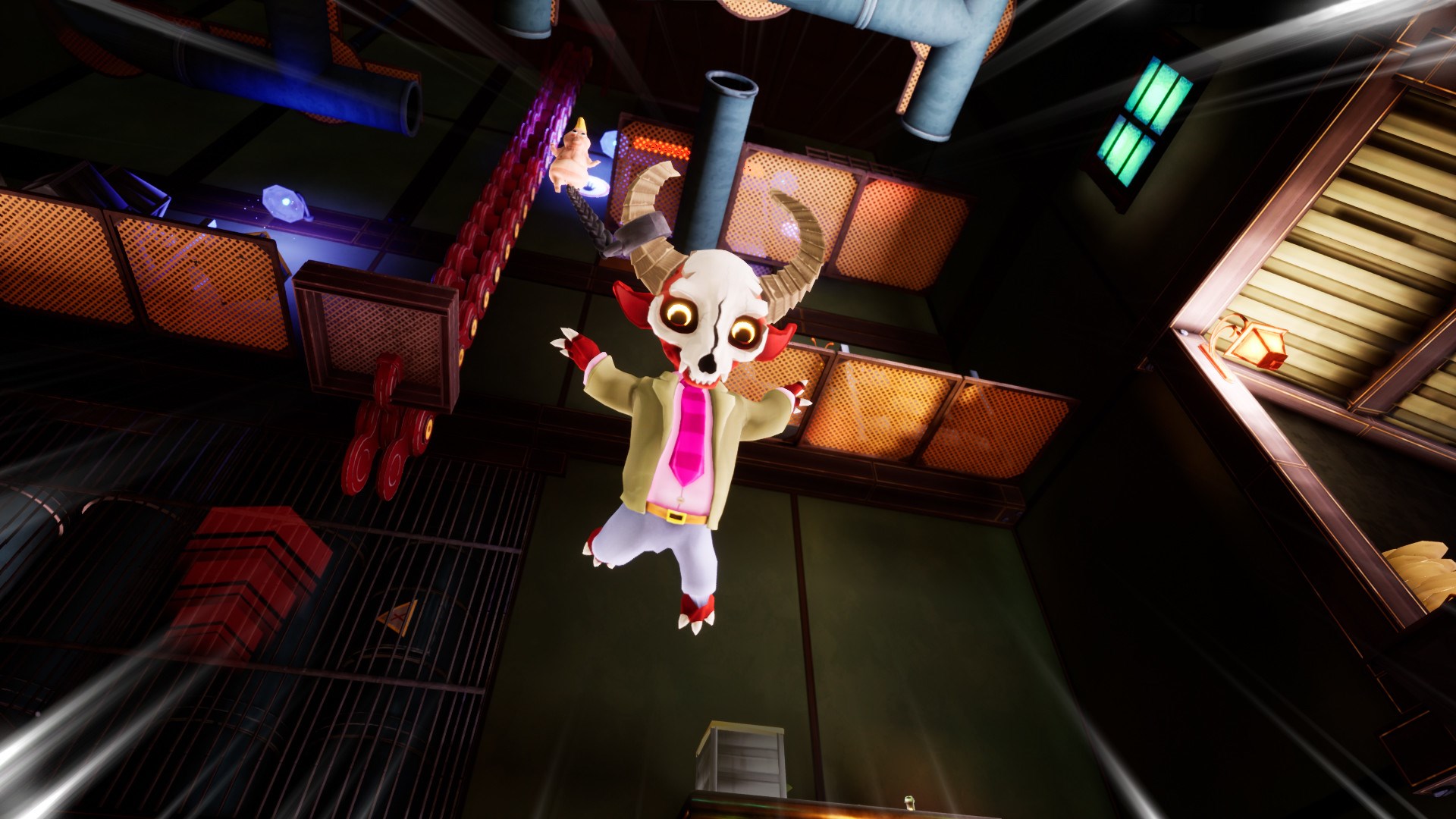 Hell Pie is a new indie 3D platformer with crude adult humour in the vein of Conker’s Bad Fur Day and Psychonauts, developed by Sluggerfly. As the title of the review suggests it is very reminiscent of the early 2000s era platformers that we don’t see enough of these days. So seeing a new one in 2022, especially for the bargain price of £19.99, is a Rare treat. (See what I did there?)

In Hell Pie you play as Nate: The Demon of Bad Taste, which in the world of Hell Pie is the 8th Deadly Sin. Nate is accompanied by Nugget, a small naked angel dude attached to Nate by a chain that he can use as a grappling hook when traversing platforms to swing and reach areas further away. You also have a traditional double jump and dash ability for more traversal options, with more available via an unlockable skill tree. You’re tasked with visiting several different worlds with a variety of settings to collect ingredients for Satan’s birthday pie.

You start the adventure in Sin Inc., the offices where our anti-hero Nate works for the Dark Lord. After messing around with the photocopier, printing off several rude pictures, you’re instructed by Satan to go and see the chef who will give you a list of ingredients for his birthday pie. Chef opens up the first Hellivator that allows you to travel to the first world of the game.

You arrive at some sort of beach resort, which is the first hub world that you’re free to explore and where you can find several different collectibles and side activities for various characters. These include little sheep with a horn that you can take to an alter to sacrifice by pulling the horn off in exchange for new horns for Nate, that give him new abilities allowing access to new areas.

The core platforming is a lot of fun and very well made, as is the combat with the game’s various enemies. This usually has you battering them with your little angel buddy but there are also different guns at certain points, that you can use to shoot them and solve some platform puzzles with as well.

The different hub worlds, and levels within them, all offer a lot of variety in settings from the aforementioned beach resort to a sewer full of angry poos, a neon-soaked cyberpunk style cityscape, and a land up in the clouds with rainbow slides.

At the time of writing, I’ve played Hell Pie for nine hours and according to my save file I’m only at 47% complete, having been to four worlds including the starting area, which has its own set of collectibles including some of the ingredients.

There are still several locked elevators, which you unlock once you’ve found enough ingredients. Chef will call you back to his kitchen so they are doled out gradually, but you can go between any you’ve unlocked whenever you want. Some areas won’t be accessible until you have the right ability, so this gives you reasons to go back through levels once you’ve obtained them.

Hell Pie is a substantial offering for a £20 indie game, with a good amount of polish and some really good looking graphics and a ton of fun gameplay mechanics. It keeps things varied with some unexpected things which I won’t spoil, but they offer respite from the core platforming. I’d really recommend Hell Pie; if all of this sounds good to you it’s a great game for the relatively low asking price.