HabitAware has created a smart bracelet called Keen2 that it hopes will help people curb their compulsive habits by making people conscious about them. It is available today for preorder.

Most people have a habit that could make them feel self-conscious, but about one in 20 people (22 million people) have body-focused repetitive behaviors (BFRBs), or compulsive habits like nail-biting (onychophagia), hair-pulling (trichotillomania), and skin picking (dermatillomania).

Keen2 tries to remind people when they are going through motions that mimic the behavior that someone wants to stop. It helps people manage impulses, overcome shame, and foster community around these common medical conditions. 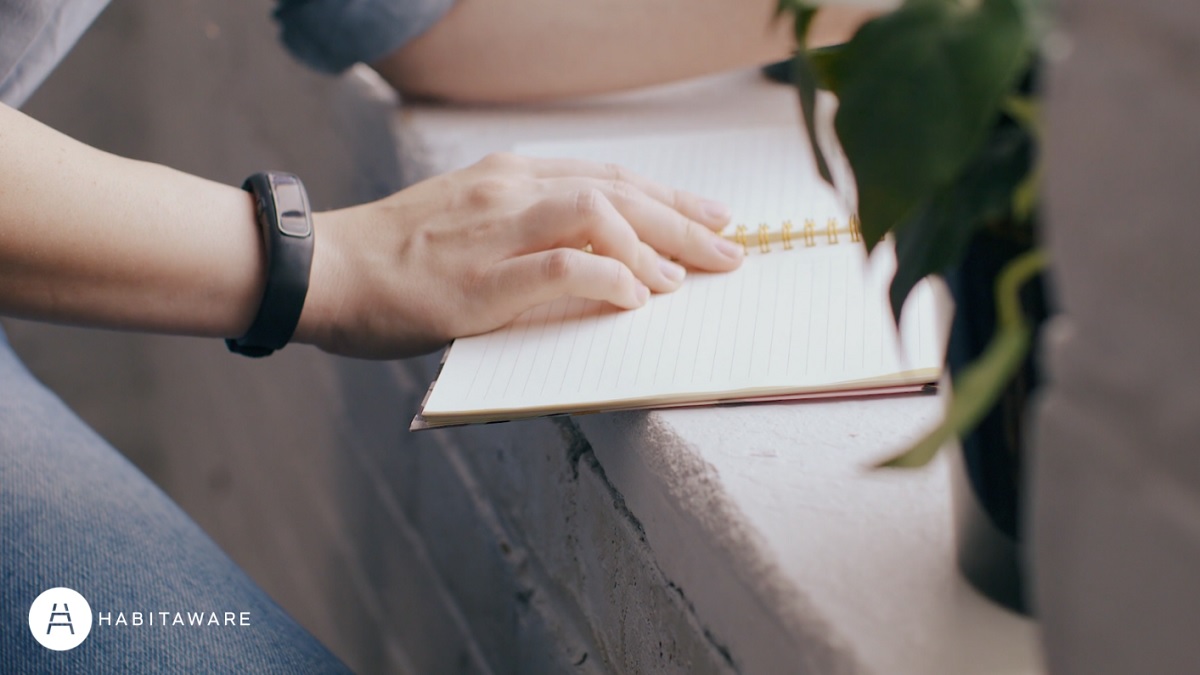 Above: Keeping a journal helps you become aware of habits.

It’s the brainchild of husband-and-wife team Sameer Kumar and Aneela Idnani. They realized it was challenging problem when Aneela told Sameer that she had a condition called trichotillomania, a compulsion to pull out the hairs of her eyebrows and eyelids.

“I am a hair puller. Hair pulling is a mental health condition,” Idnani said in an interview with VentureBeat. “It’s something that started for me in my early teens. I didn’t know what it was. I thought it was very weird and kind of wrong for doing this damage to myself. So I hid it for about 20 years.”

It was a repetitive behavior that she lived with all of her life, and she wanted to stop.

“I was walking into the bathroom to get my makeup pencil, which I used to draw on my eyebrows, and noticed that my eyebrows were missing,” she said. “That was the moment where I realized it and shared it with my husband for the first time.”

Idnani founded a company in 2016, and Kumar started thinking about a way to help. Together, they came up with Keen, which has built-in motion sensors that can detect movements of your arms. They launched that product in 2017, and now they’re back with a second-generation solution.

The smart bracelet combines with a mobile app system that uses patented gesture detection technology to bring “keen” awareness to trance-like and unwanted mental health behaviors. I can relate to this because I chewed my pens and pencils, and I have other mild compulsions.

“Mental health is a spectrum,” said Idnani, in an interview. “It’s about helping us help. It’s about us helping the people for which this is a debilitating problem, like when I was a child, you know, pulling out my hair, and it would impact my own self-confidence. It impacted my social life in terms of kids making fun of me and me avoiding social situations and increasing that social anxiety.”

She added, “I call it the most common disorder you’ve never heard of because there’s so much shame. Because no one wants to acknowledge or say I pull out my hair, or I pick it my skin. But the reality is it is that automatic brain on autopilot. You’re not really in control. And the accompanying guilt and blame and shame really aren’t based on truth.” 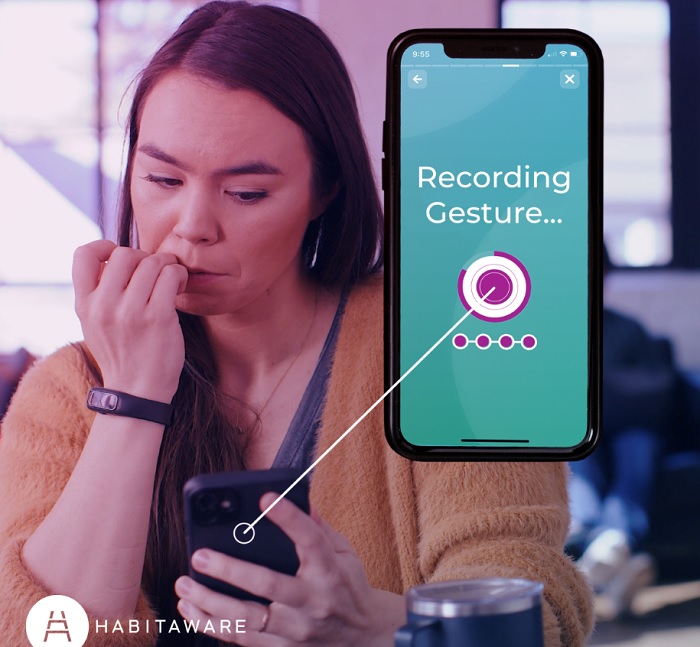 Above: You can show Keen2 the exact gestures that you do when you are engaging in a habit you want to become aware of. Then it will vibrate when you do it.

While HabitAware wants to curb this behavior, it is doing so with compassion, as it is also trying to destigmatize BFRBs. It makes people aware of them but also helps them develop healthy coping strategies as they try to retrain their brains.

“We’re ready to acknowledge and leverage the power of awareness to make new choices,” Kumar said. “We’ve been excited to see people on that customer journey of finding out that they have a mental health condition, then finding us and coming around to dealing with it.”

After years of positive response around the first generation Keen device — including Time’s Best Inventions 2018 — they took feedback and started the new product challenge. They got a grant from the National Institutes of Health and used it for research that guided Keen 2’s development.

Keen2’s improved gesture detection creates awareness of BFRBs. Users train the smart bracelet by recording wrist angle, position, motion, and speed to recognize their repetitive hand movements. A gentle
vibration—“a hug on the wrist”—shifts the behavior from the subconscious to the conscious mind when Keen2 senses the trained movement.

“Our goal with Keen2 is to push beyond just helping people build awareness, but really create this holistic solution that allows people to build awareness of where their hands are, and then actually respond with positive intention with healthy strategies, so that they’re really taking care of themselves,” Idnani said. “These behaviors are signaling that the mind and body have an imbalance. We call it your self-care alarm. When Keen2 vibrates, it’s the moment to do a short breathing exercise or drink a glass of water or deal with the underlying trigger that is the stress, anxiety, boredom, or tiredness.”

If people can get close to 80% awareness of the habit, and then create a competing response for that time, then the behavior change is working, Idnani said, and then the company can move people on to more social support from a circle of friends who can encourage you to keep it up. I, for instance, could play with a pencil by spinning it around, rather than chewing on it. This is called habit-reversal training.

“That puts you on the road to recovery,” Idnani said.

Above: Getting support is important in changing habits.

Where the first iteration of Keen focuses on awareness, Keen2’s upgraded system is built on a 3-step evidence-based process: awareness, competing response, and support. The support is important because a restless mind leads to restless hands, Idnani said, and awareness is a step toward change. The app encourages people to keep a journal, where they can log how often they engage in the behavior, as it help builds self-awareness.

“The idea here is that this can be much more efficiently done with the device and an app that automatically records when you’re doing this behavior,” Idnani said. “With that information, [caregivers] can help identify the triggers for you. It gets to your subconscious, and then they can treat it.”

Most people with BFRBs go to long lengths, spending time and money, to hide their condition. For a fraction of the price of wigs, years worth of make-up, eyebrow tattoos, and other attempts at concealment, Keen2 empowers lasting behavior change.

The company has raised about $1 million in private funding and it has received $1.6 million in grants. Keen2 launches for preorder today for $180 and will be available in two colors, white and charcoal. Keen2 is expected to ship in February.

What keeps the company going? Someone wrote recently saying, “This is the product I’ve needed my whole life. I hope I won’t need it forever.”