God of War Ragnarok's Unlocking the Mask chapter, unsurprisingly, features Atreus finishing what he started and unifying the mark fragments. This is the concluding chapter in Ragnarok's Atreus solo plot line. It will take you to the chilly realm of Niflheim. But before that happens, you are going to need to return to good ol' Asgard. Though with the recent death of Heimdall, you may find that your reception is warmer in Niflheim.

Being another Atreus chapter, you will once again be traveling along a pretty linear route. However, as is also the case with these chapters, there will still be treasure to collect along the way. And since you can't travel back to the Atreus sections of these worlds, this will be your one chance to grab them in the wild. Lucky for you, we're here to guide you! 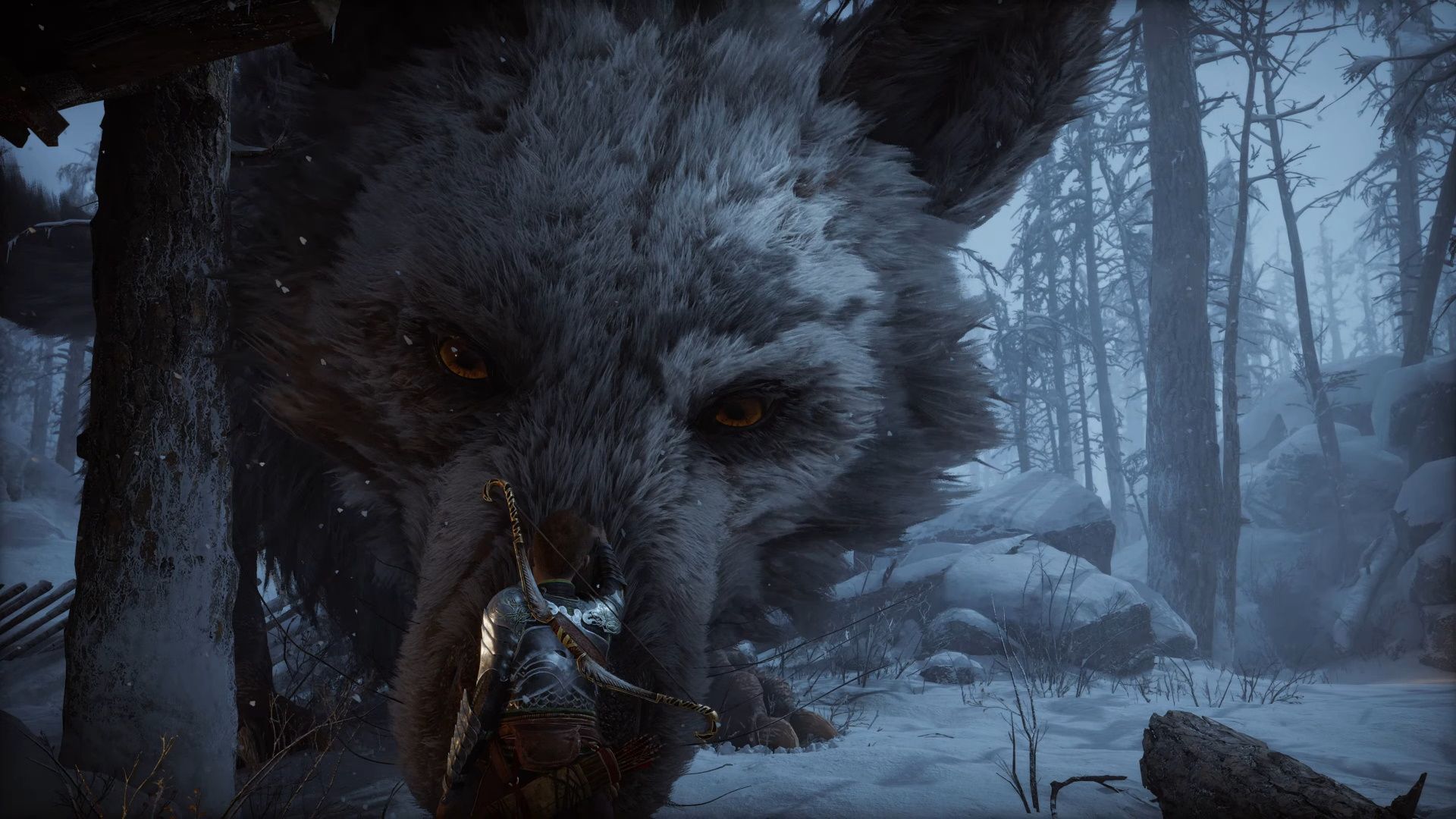 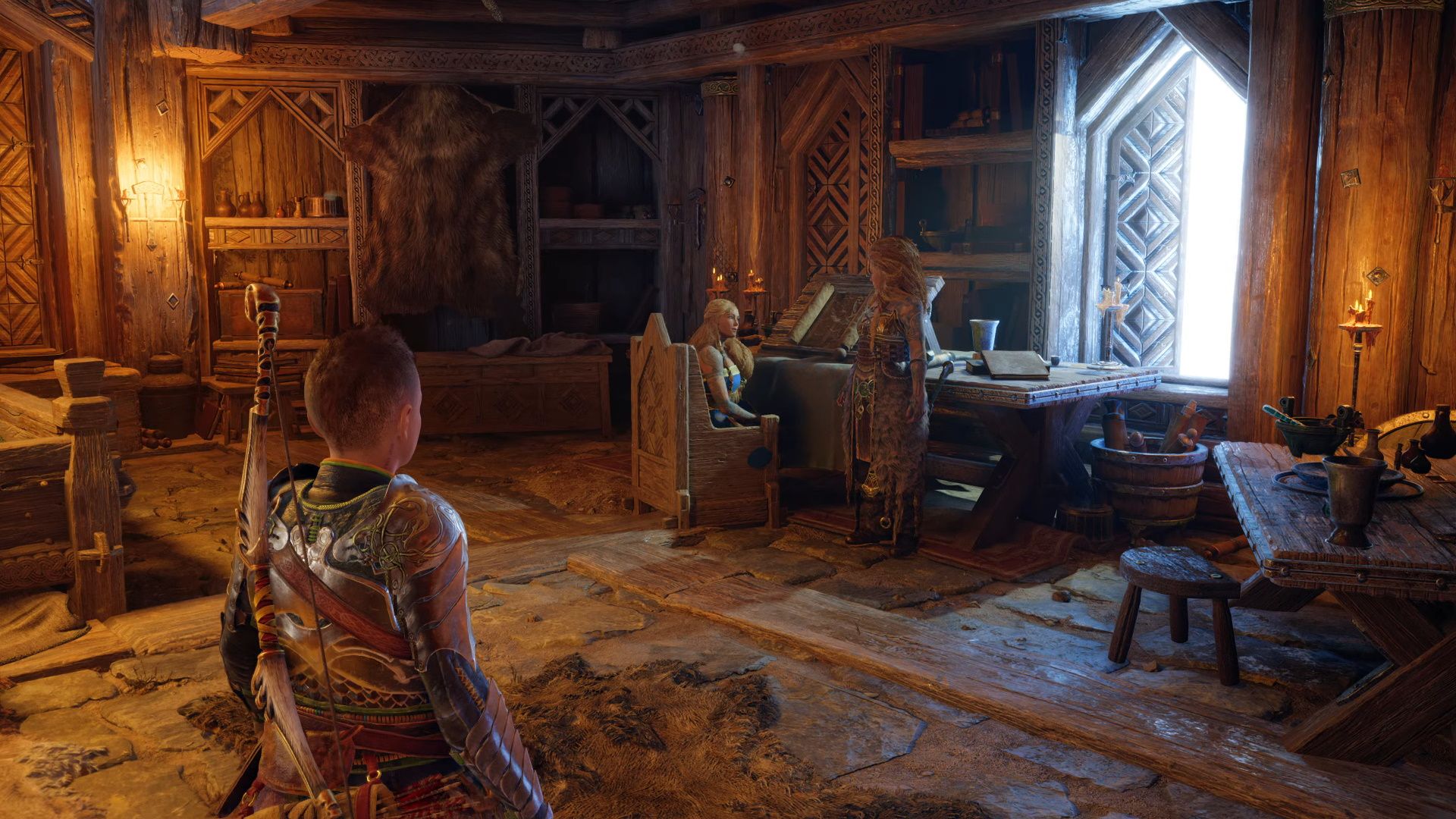 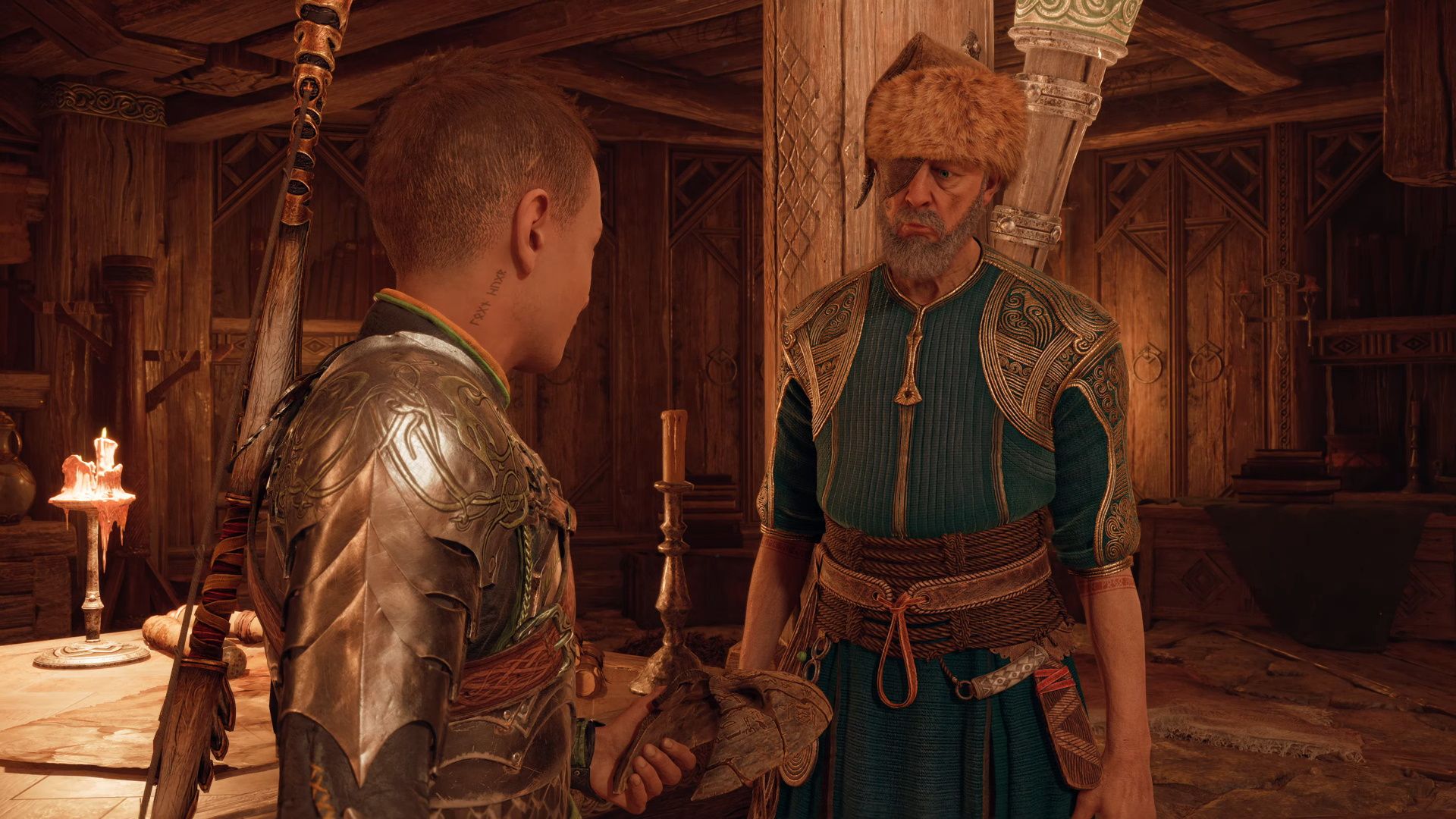 This quest will begin with a very, very brief stop back in Midgard. You will hang out with Fenrir, chill with Angrboda, and then head into your house. At which point you will be back in Asgard. From here your options are going to be pretty limited. While you were previously able to witness a number of optional interactions, the only one you will be able to engage with here is between Sif and Thrud. If you hang around, you can even talk to Sif one-on-one. For obvious reasons, you won't have the pleasure of being berated by Heimdall in the common area. Oh well. Go talk to Odin, and he will send you on a quest to Niflheim. But first, you are going to need to retrieve your trusty companion: Thor. 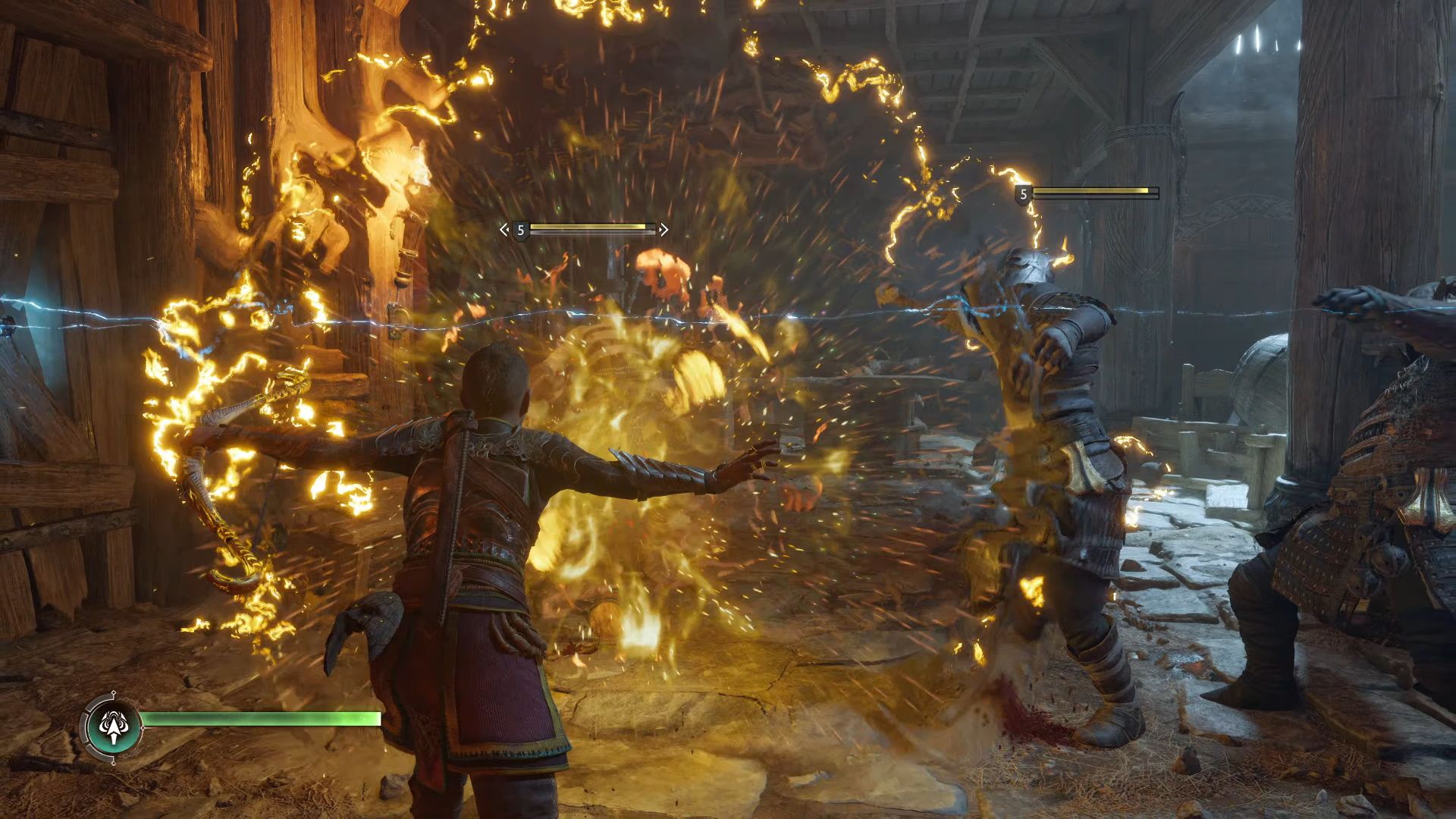 You are going to head to the local tavern with Thrud. Your weapons will be stripped from you, and after a brief conversation with Thor, you are going to, predictably, end up in a giant brawl. The first phase will see you square off against a number of unarmed Einherjar. All their punches are pretty slow, so they are very easy to parry. Just slam them with your bow, have Ingrid slash them, and you will move through them in no time. 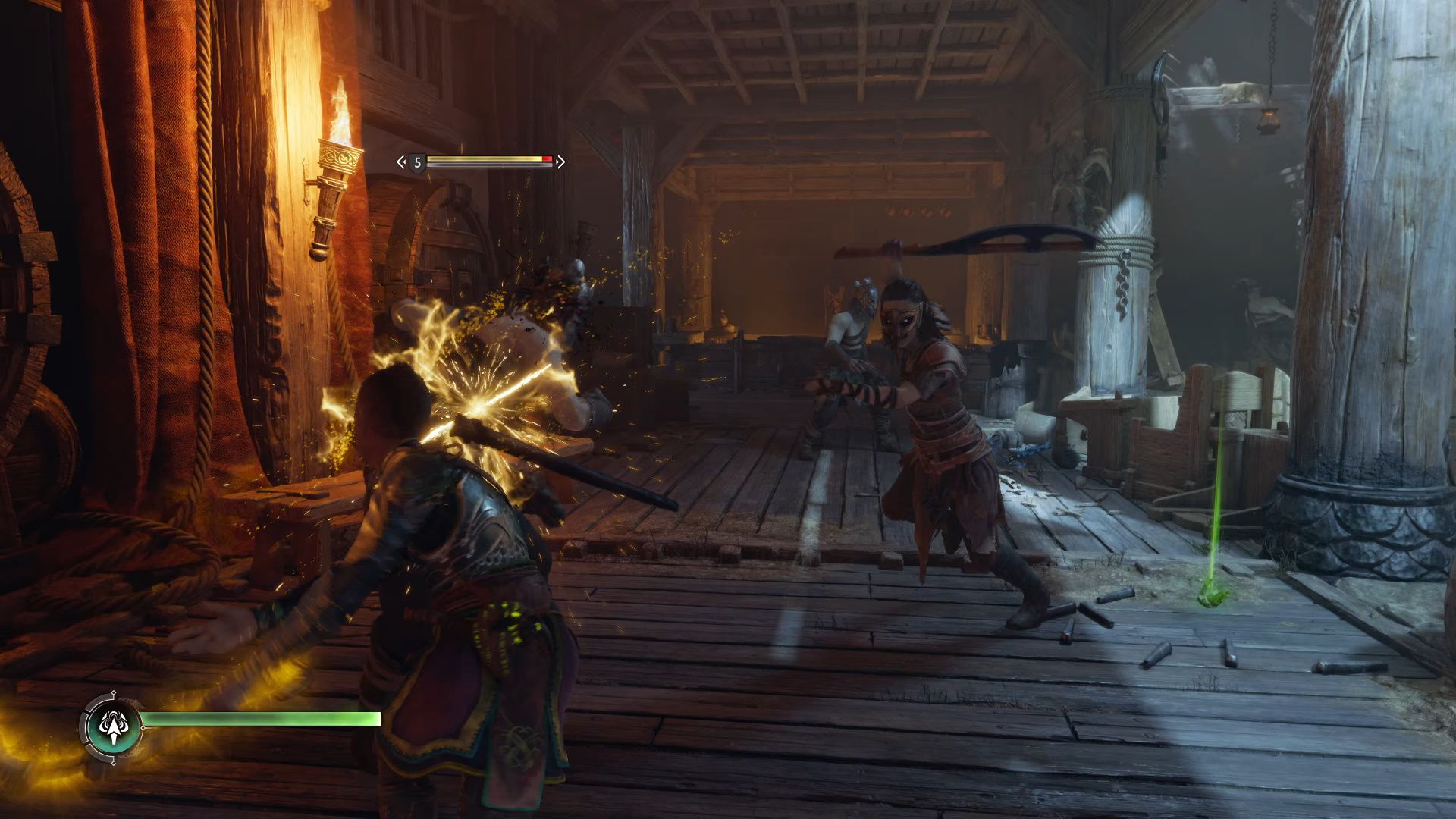 Once you finished the first batch, you will have a brief conversation with Thor, then get tackled by another Einherjar. You will then face off against another group, this time, though, they are going to be armed. However, to balance things out, Thrud will join you. You will fight through a wave of these celestial goons before Thor accidentally catapults you to the second floor. 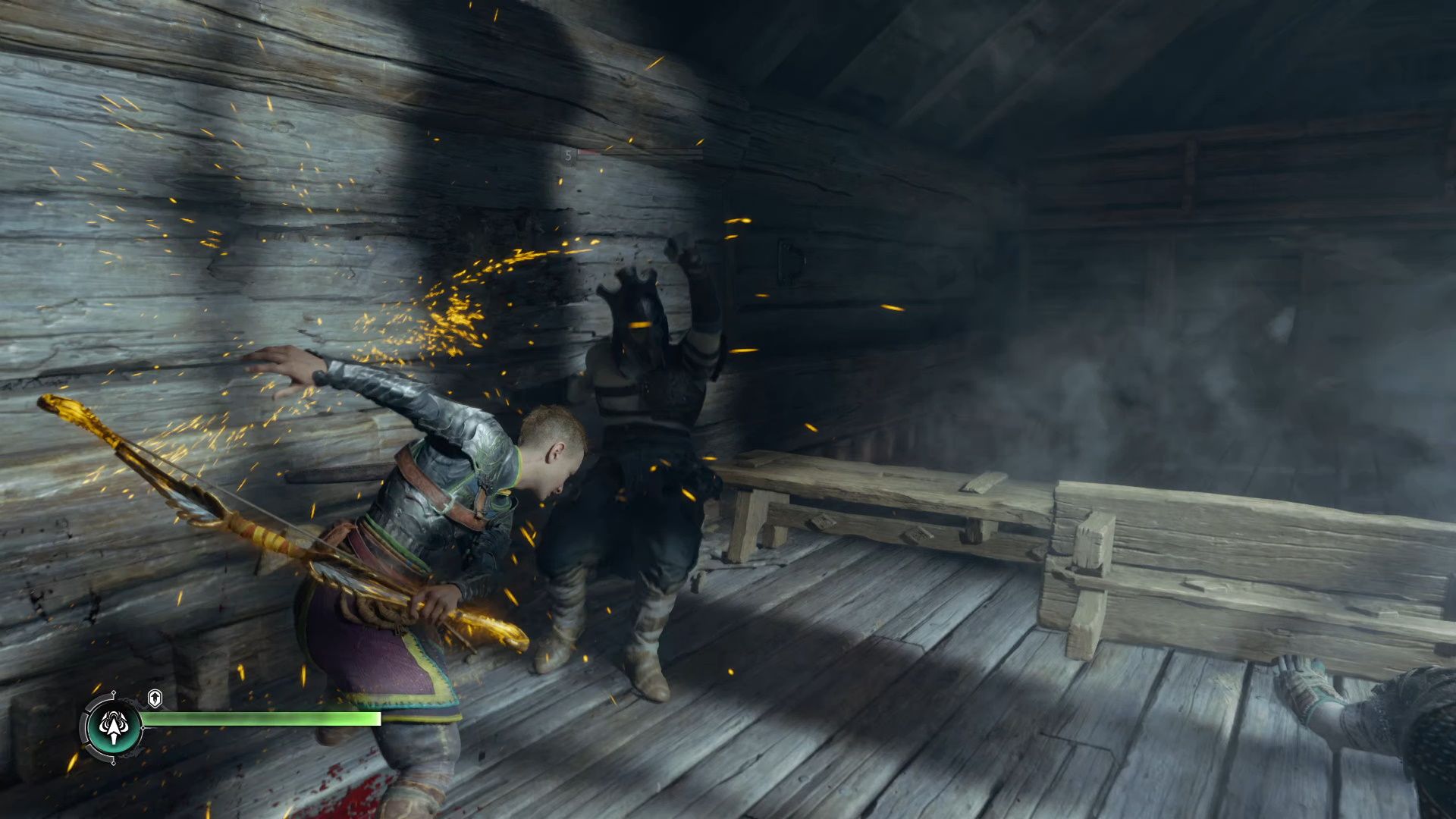 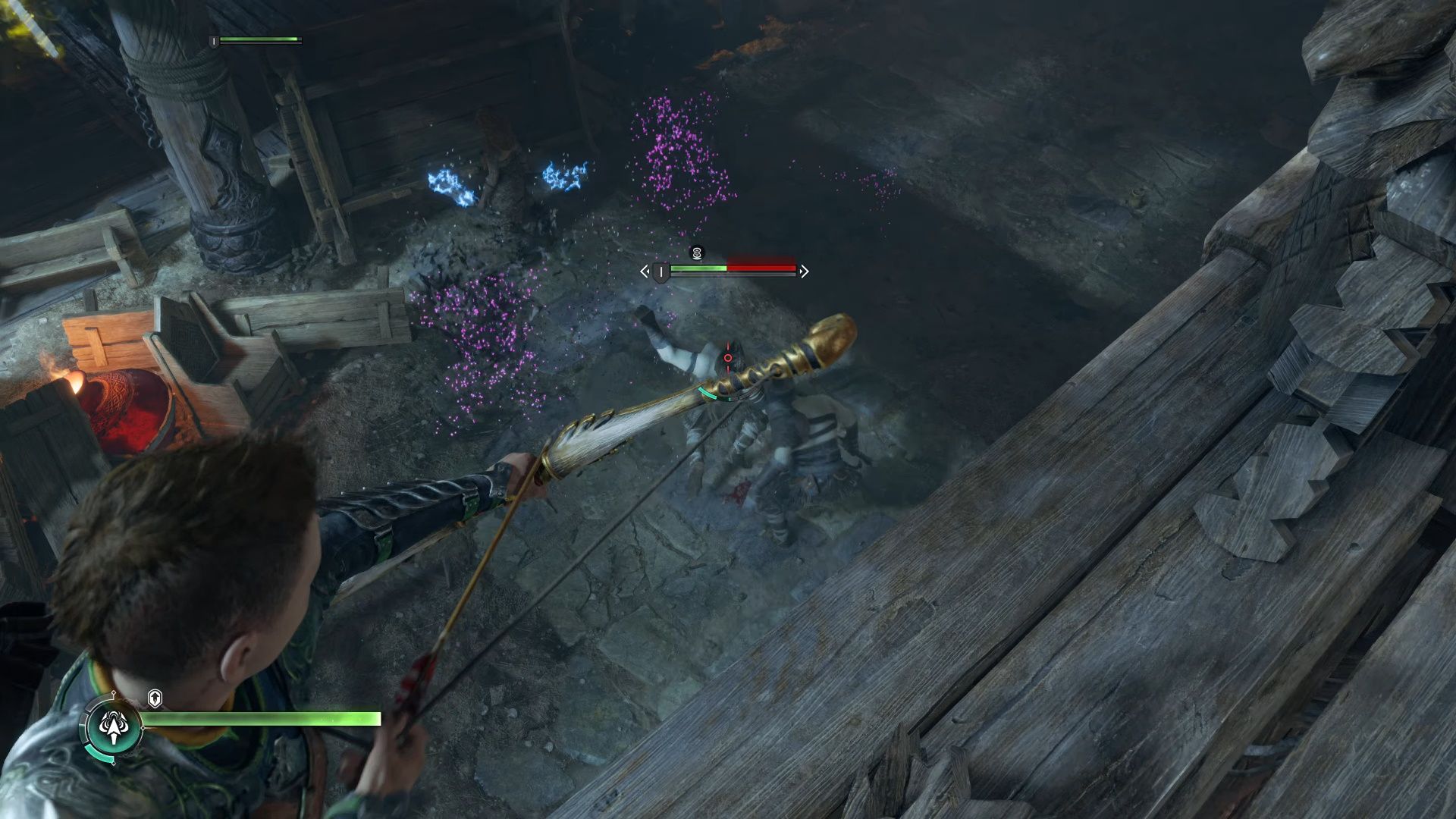 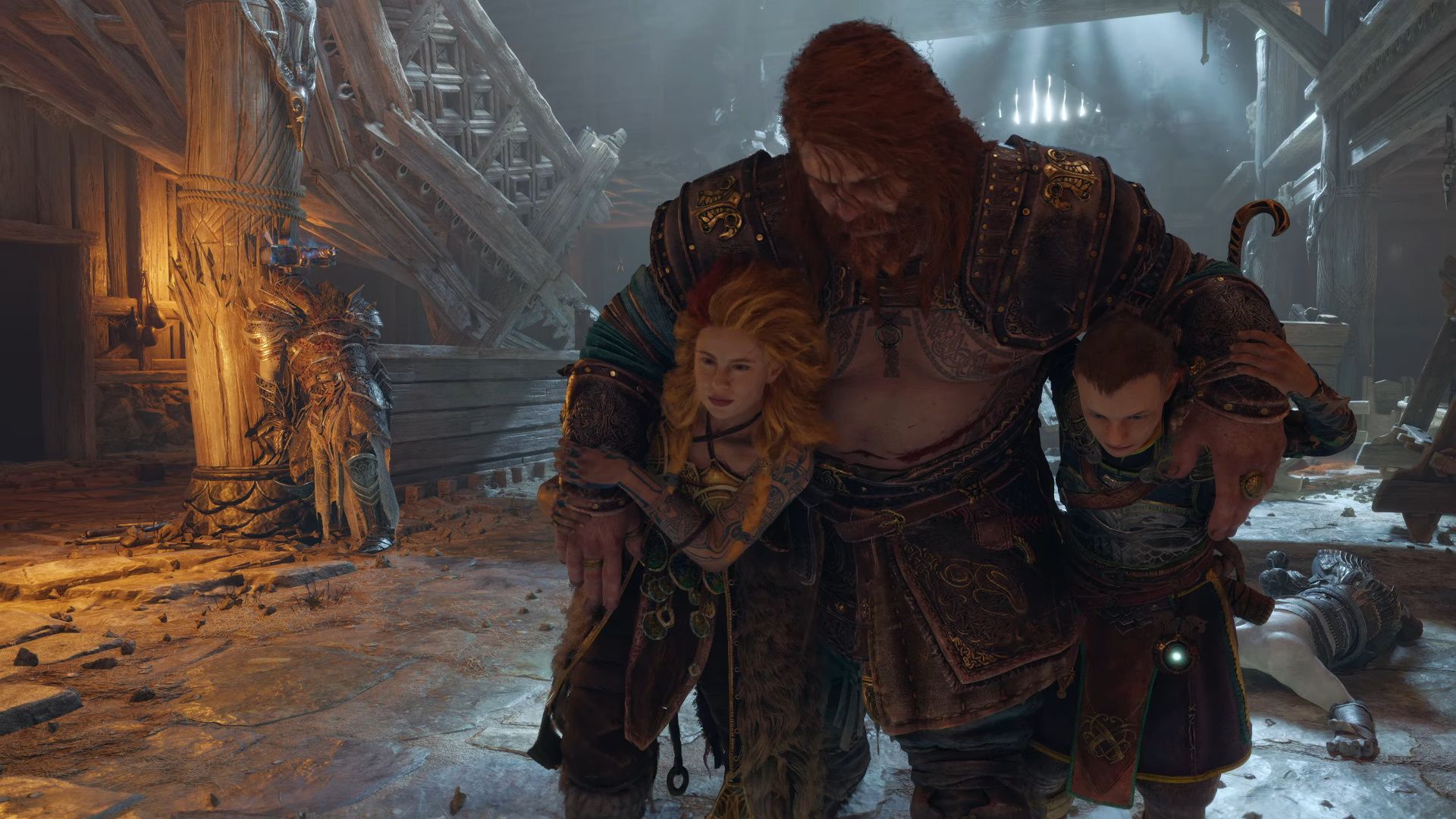 Once you land up above you will need to fight three Einherjar. There'll be no Thrud to help you this time. However, they are all unarmed, so once again, they are easy to parry. Once you clear out these three, you will be thrown your arrows. Now, pick off the Einherjar below. Eventually, the floor will give way, and Atreus will be grabbed by a giant Einherjar. For all intents and purposes, the tavern fight is over. You just need to help Thor out of the tavern, then you will make your way to Niflheim. 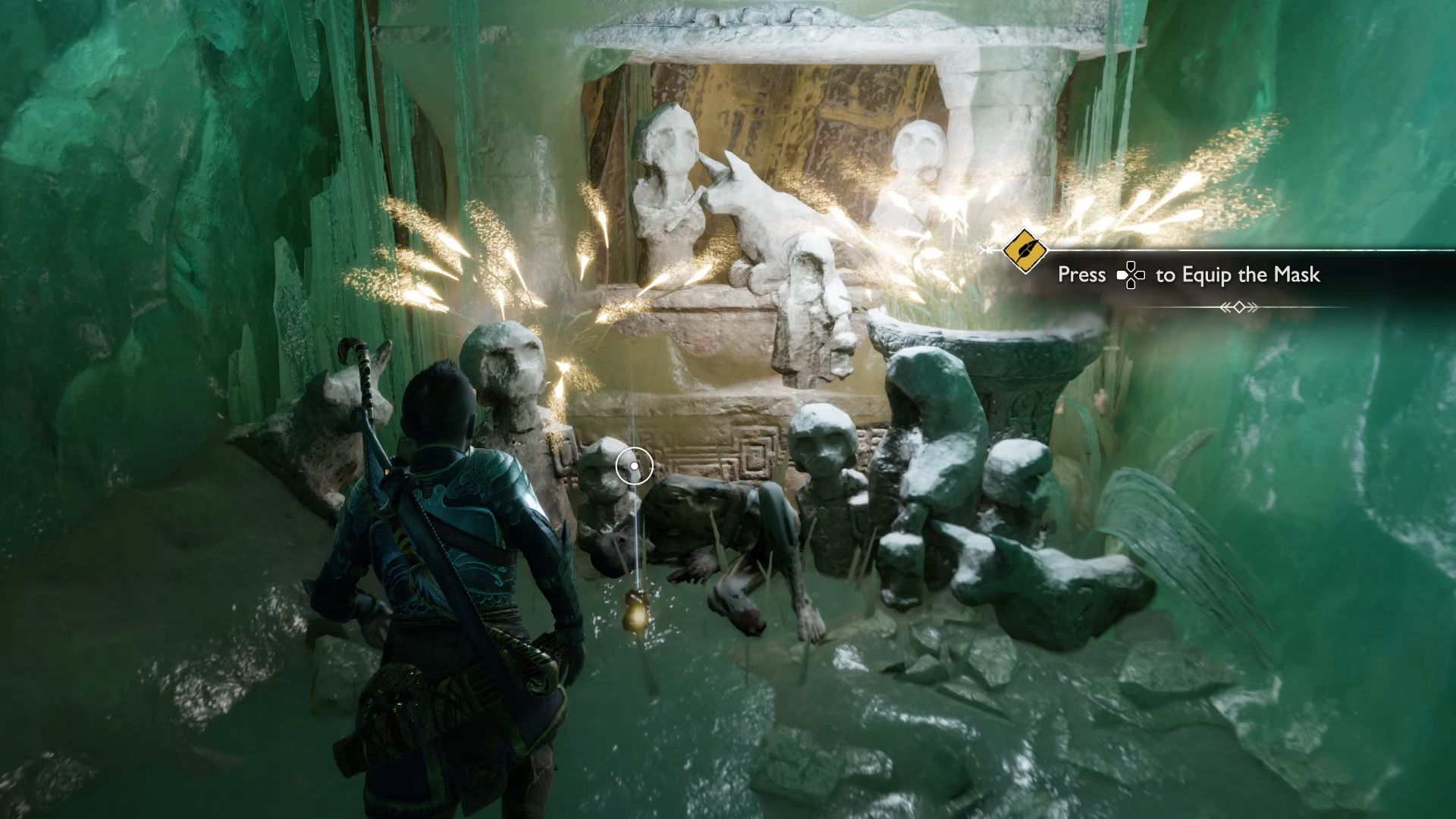 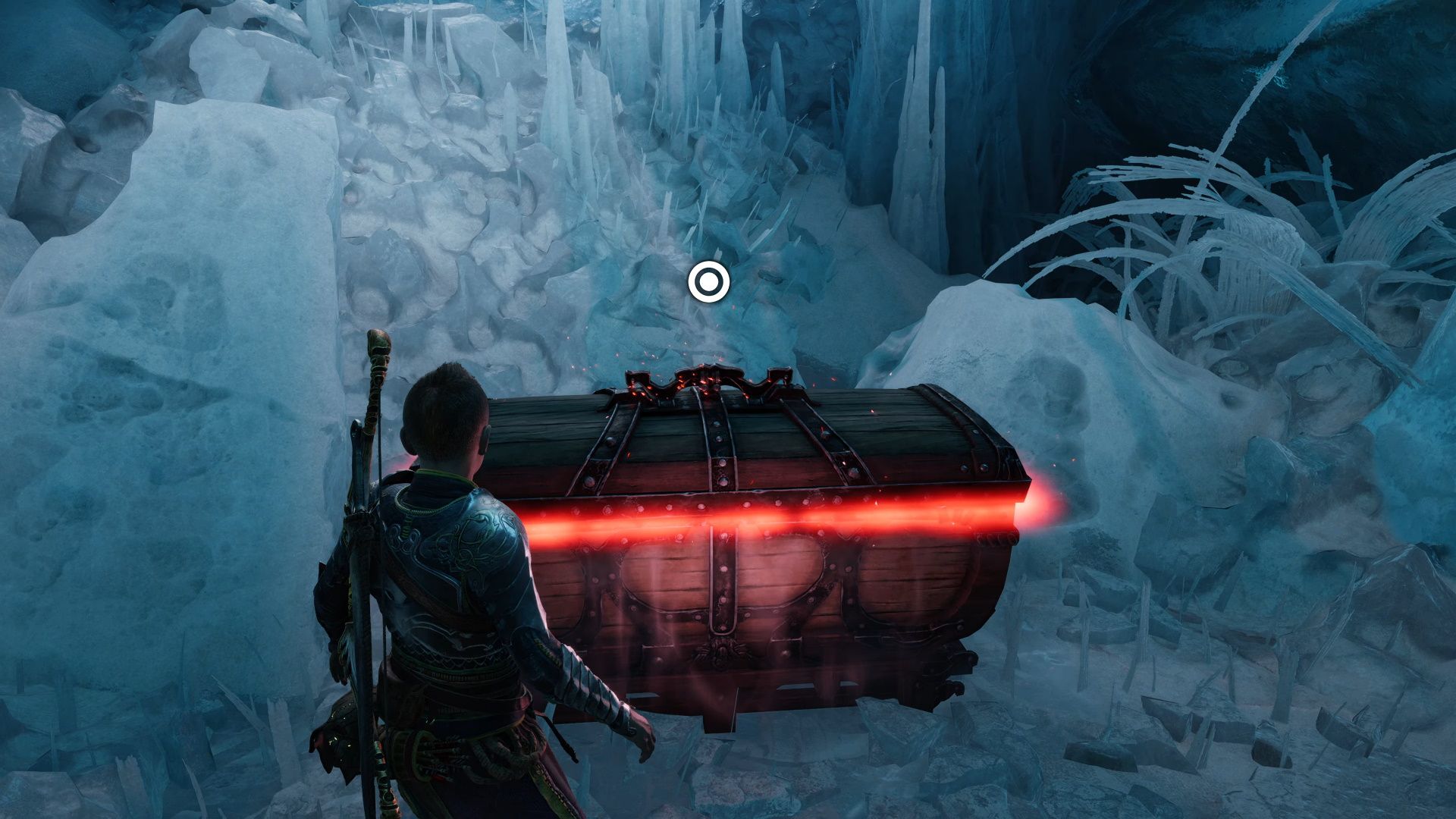 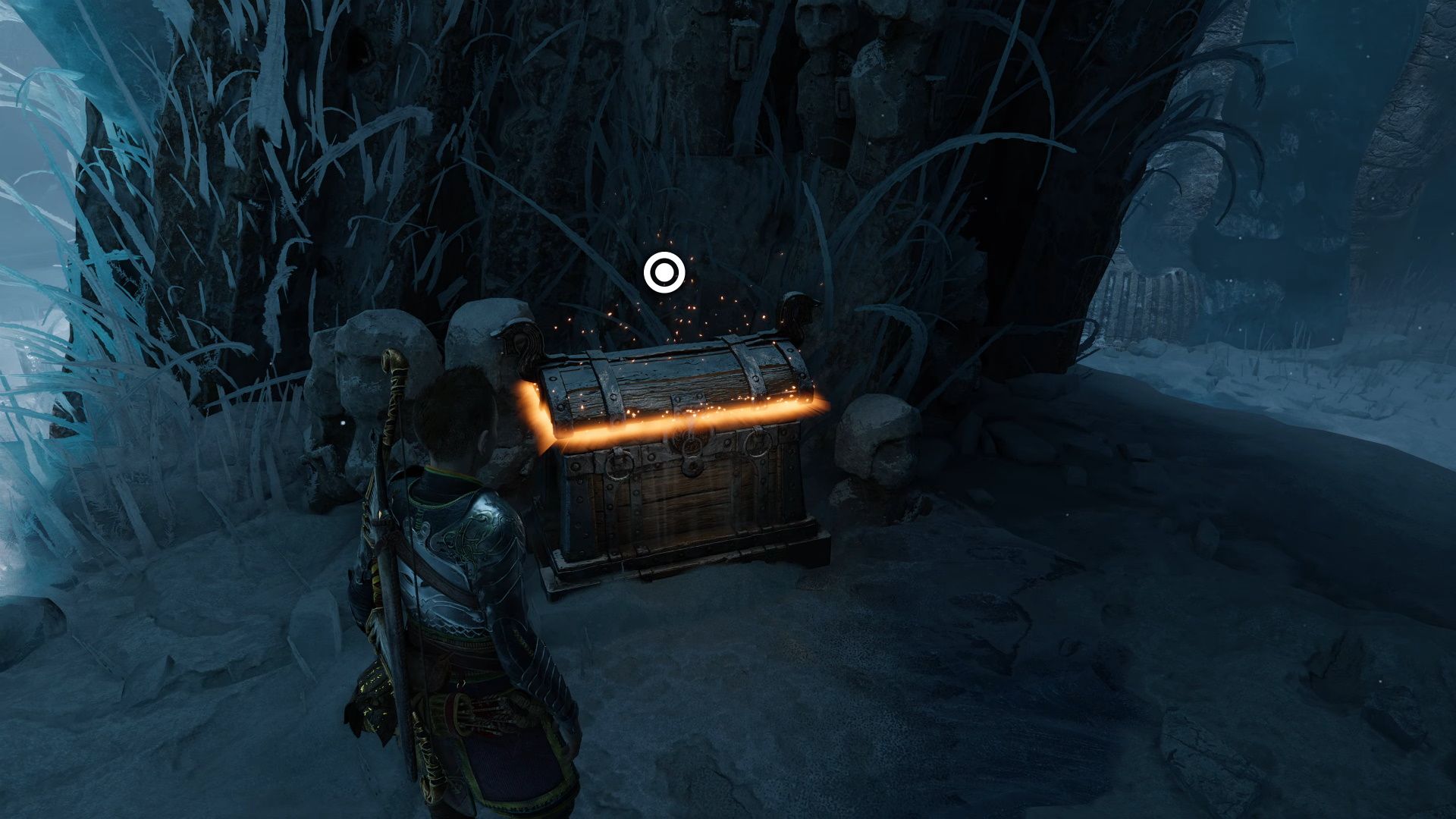 The moment you arrive in Niflheim, turn 180 degrees, hop up to the altar, and grab a hefty Hacksilver pouch. From the altar, take a left, head down the hallway, shoot a barrel hanging from the ceiling, grab the Hacksilver, take a right around the corner, and open the red chest. Now, head back to the main chamber, but stick to the leftmost wall. You will climb up to a raised platform. Here you will find another chest. With that, you will have officially cleared out this area of all its treasures. Head out through the right side of this area, and you will find yourself on a bridge made of ice. 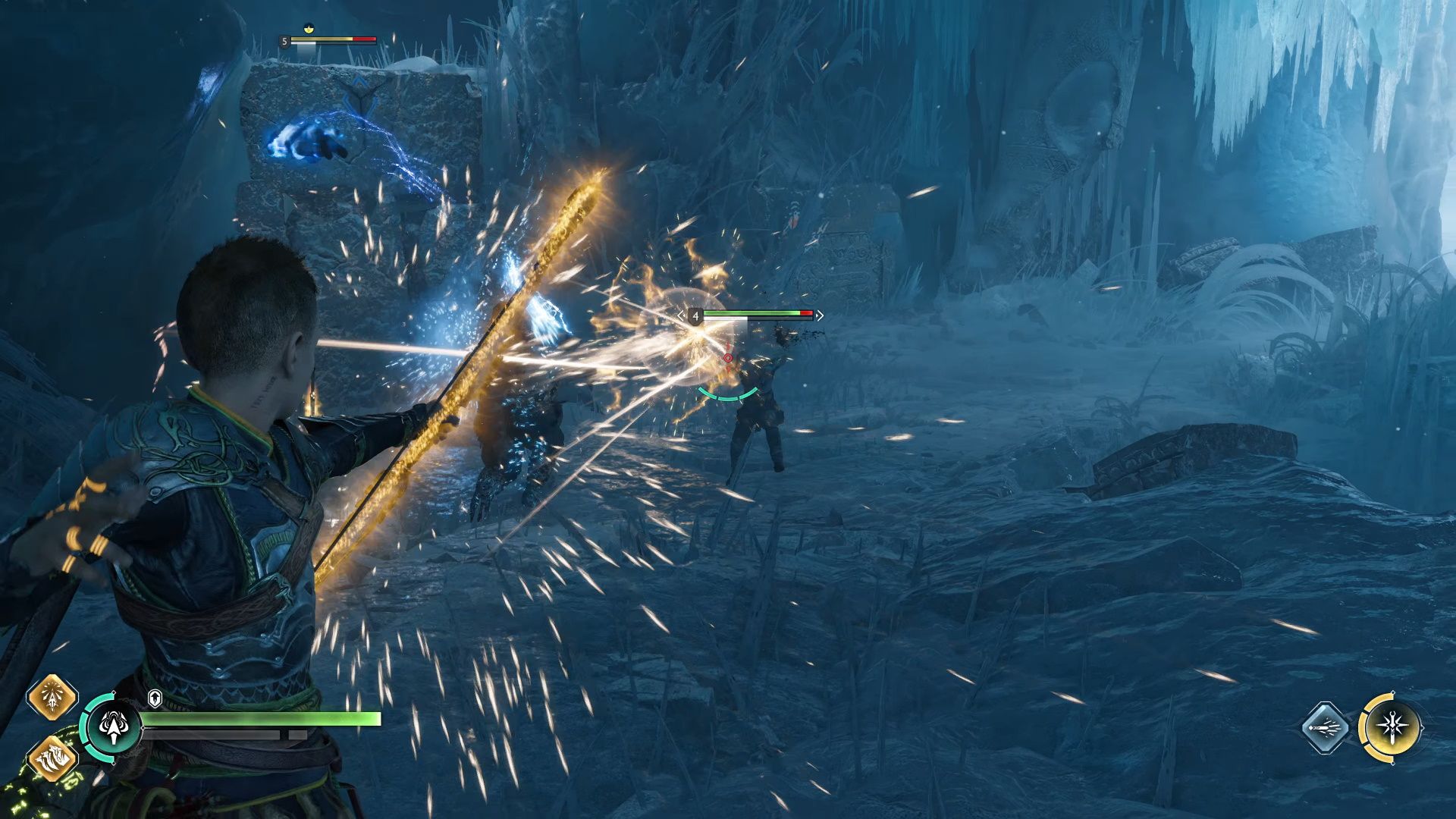 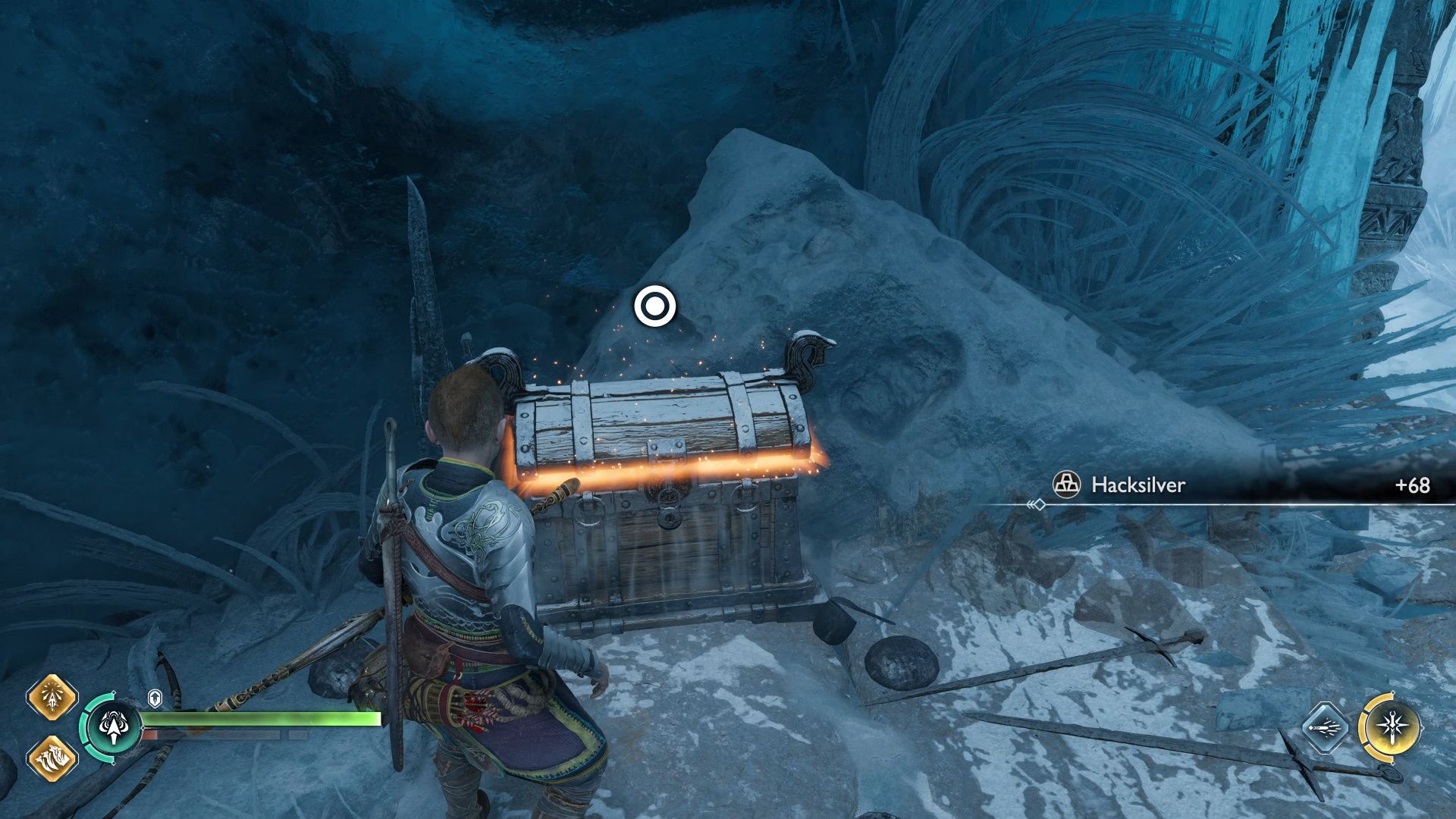 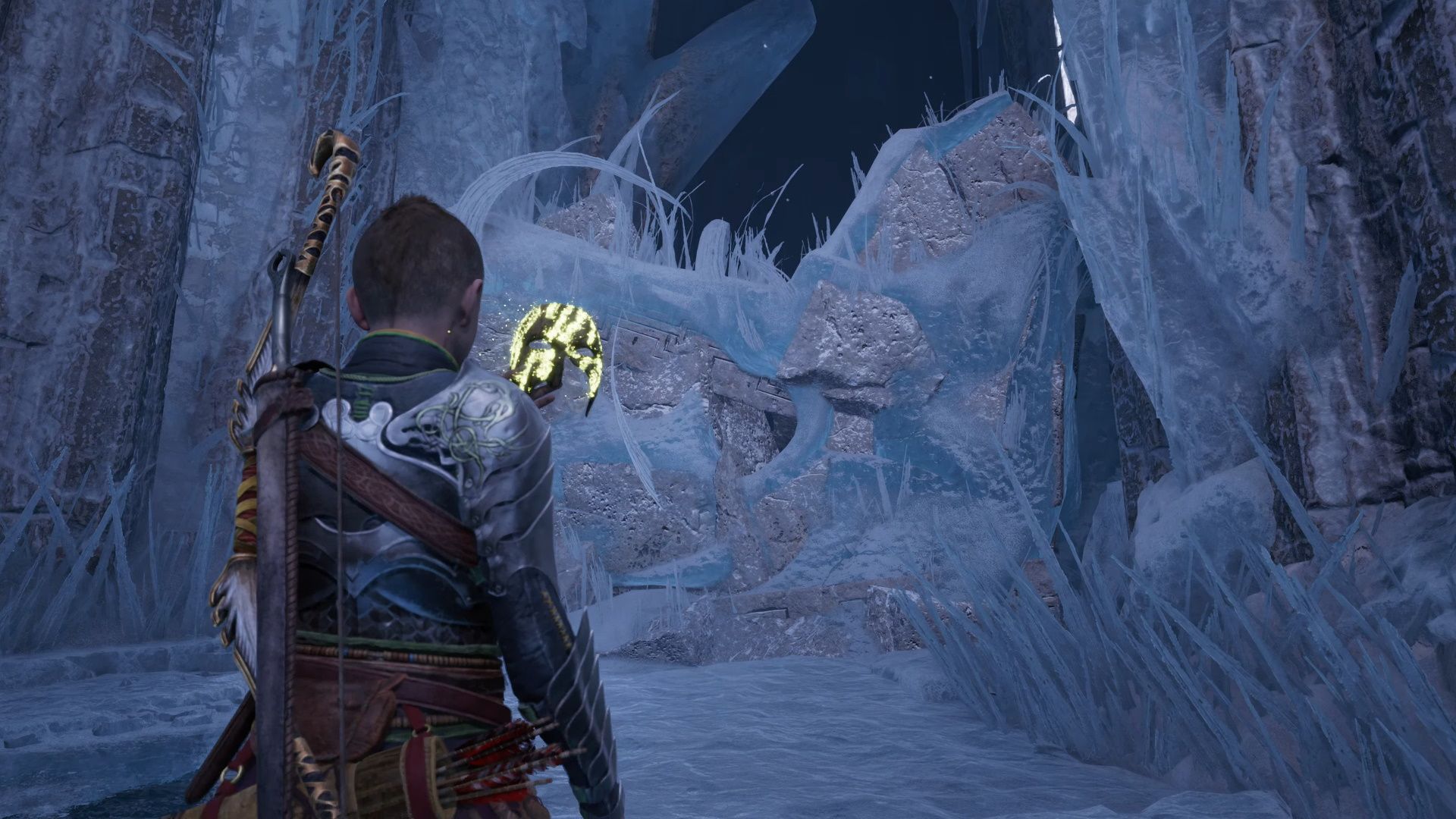 Once you hit the bridge, you will be attacked by a group of Hel-Walkers. Nothing you haven't dealt with a million times already. On the left, you will be able to hop up to the raised ledge. There is a chest up here. Once you grab the chest, hop down and head toward the main path. You will enter a wide-open room. There will be a series of projectile-flinging Hel-Walkers on the other end of the room. Take them out with your arrows. Once they are dead, help Thor finish off the rest. From here all you need to do is to take out the mask once you are in the right corner of the arena. Thor will shatter this ice wall, and you can progress. 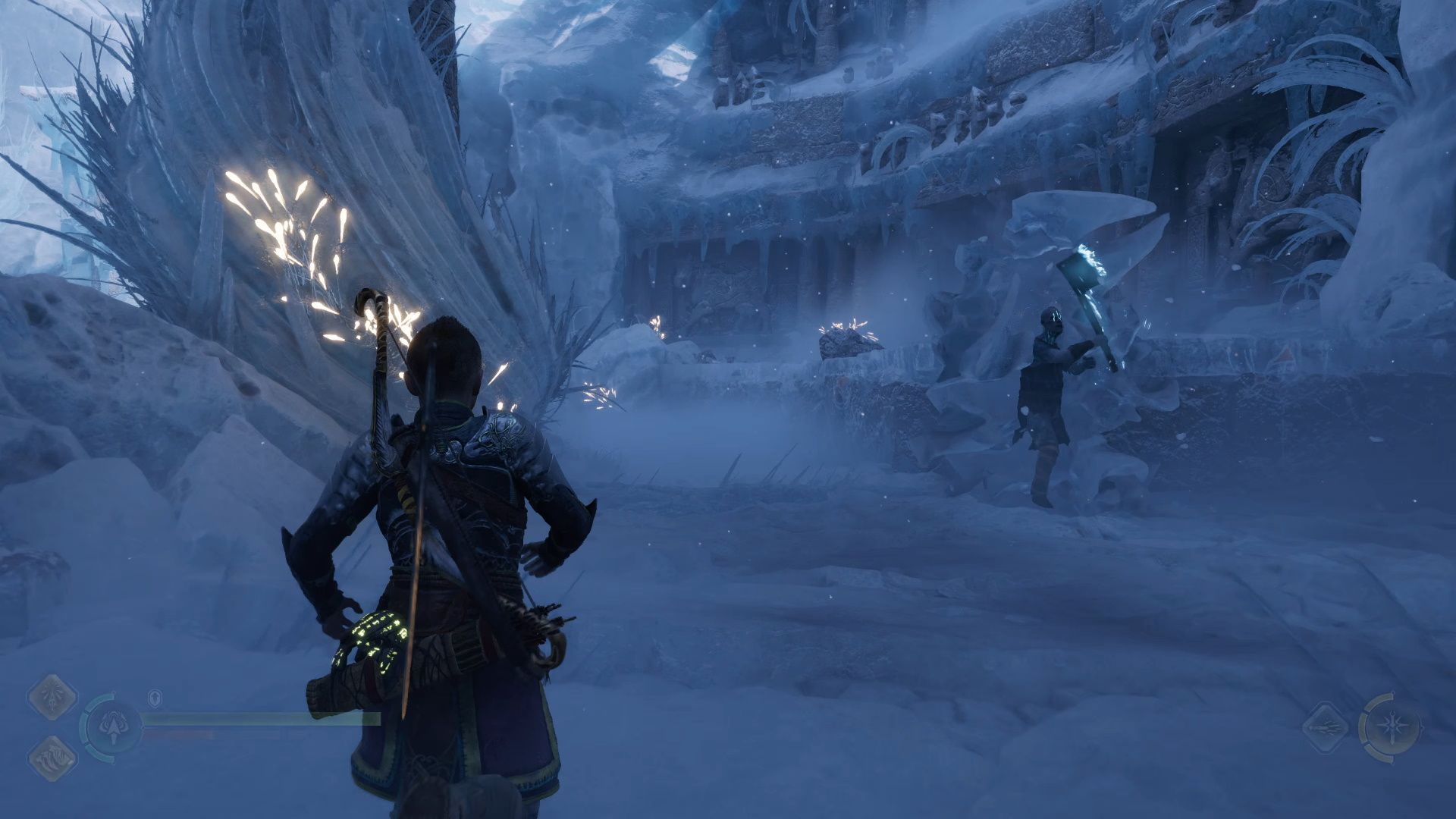 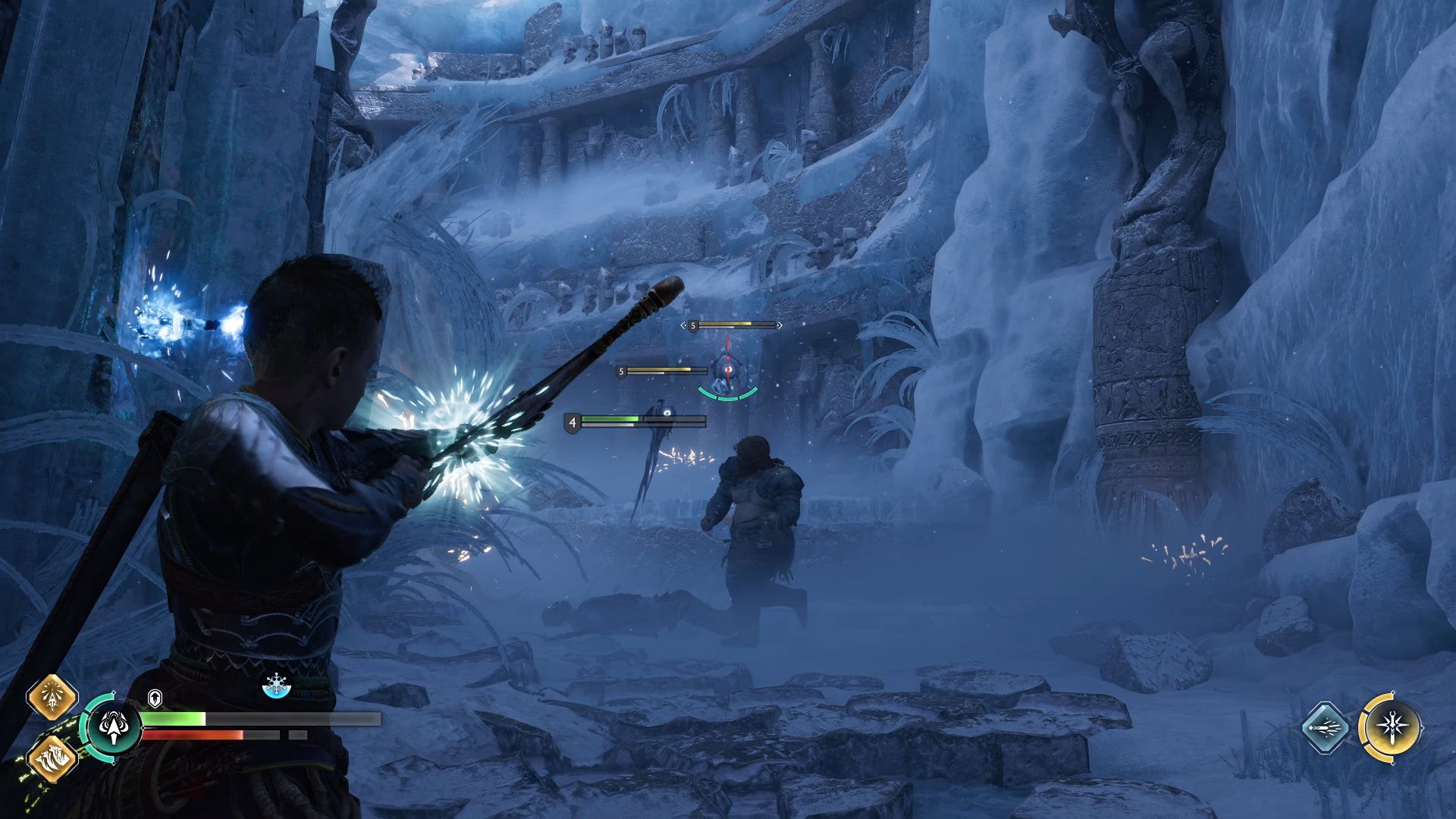 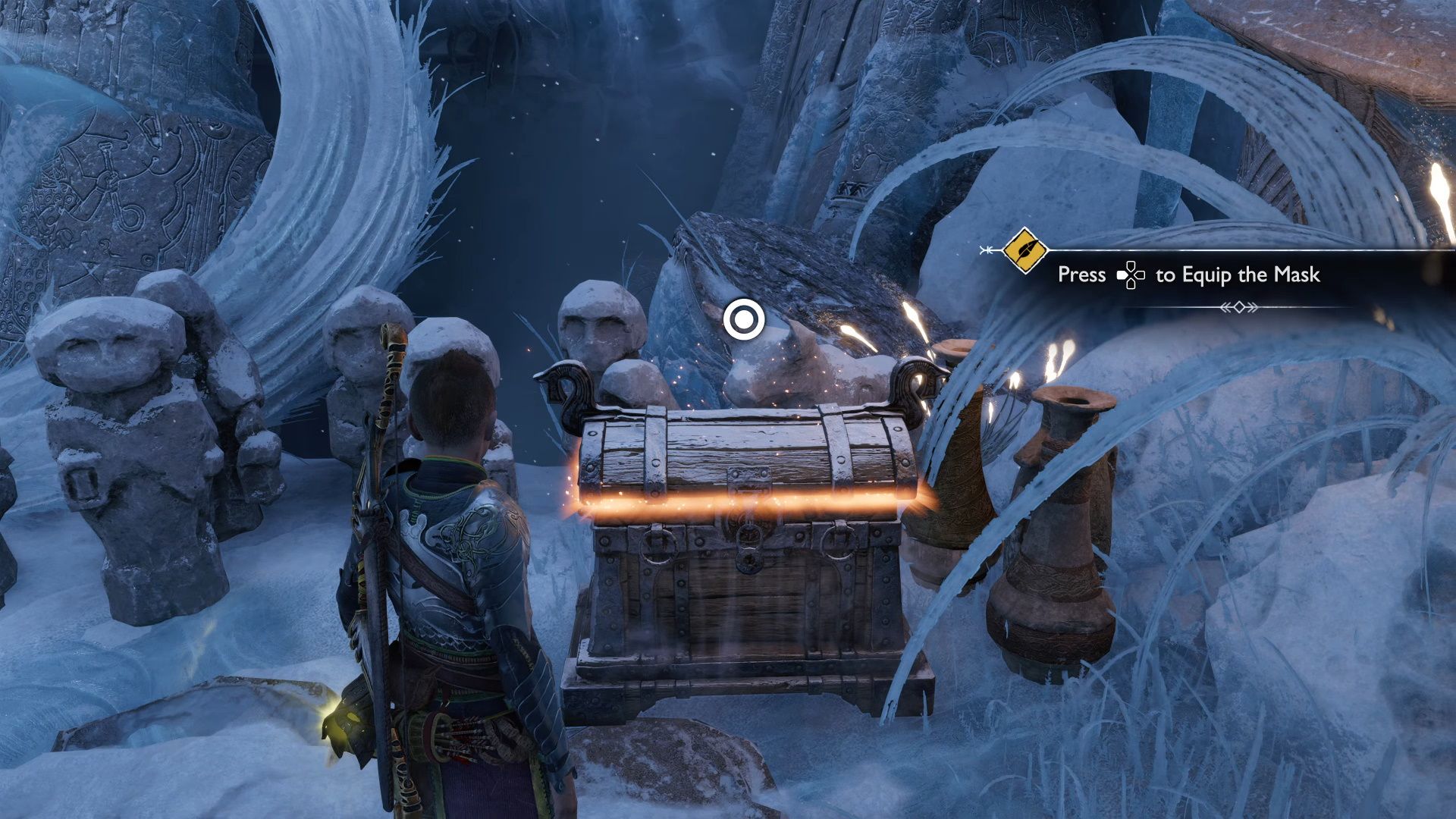 You will head down a linear pathway. Beyond a bucket hanging from the ceiling, there is little to do but travel straight forward. Once you reach an area with a giant ice obstruction sitting in the middle, prepare for an ambush. Once you get close enough, a Hel-Walker with a giant axe will bust out of that ice block. A few Nightmares will join the fray. Clear them out and push forward. You will fight another axe-wielder as well as a shield-wielding Hel-Walker. Once you finish them off, hook to the left, and you will find another treasure chest. 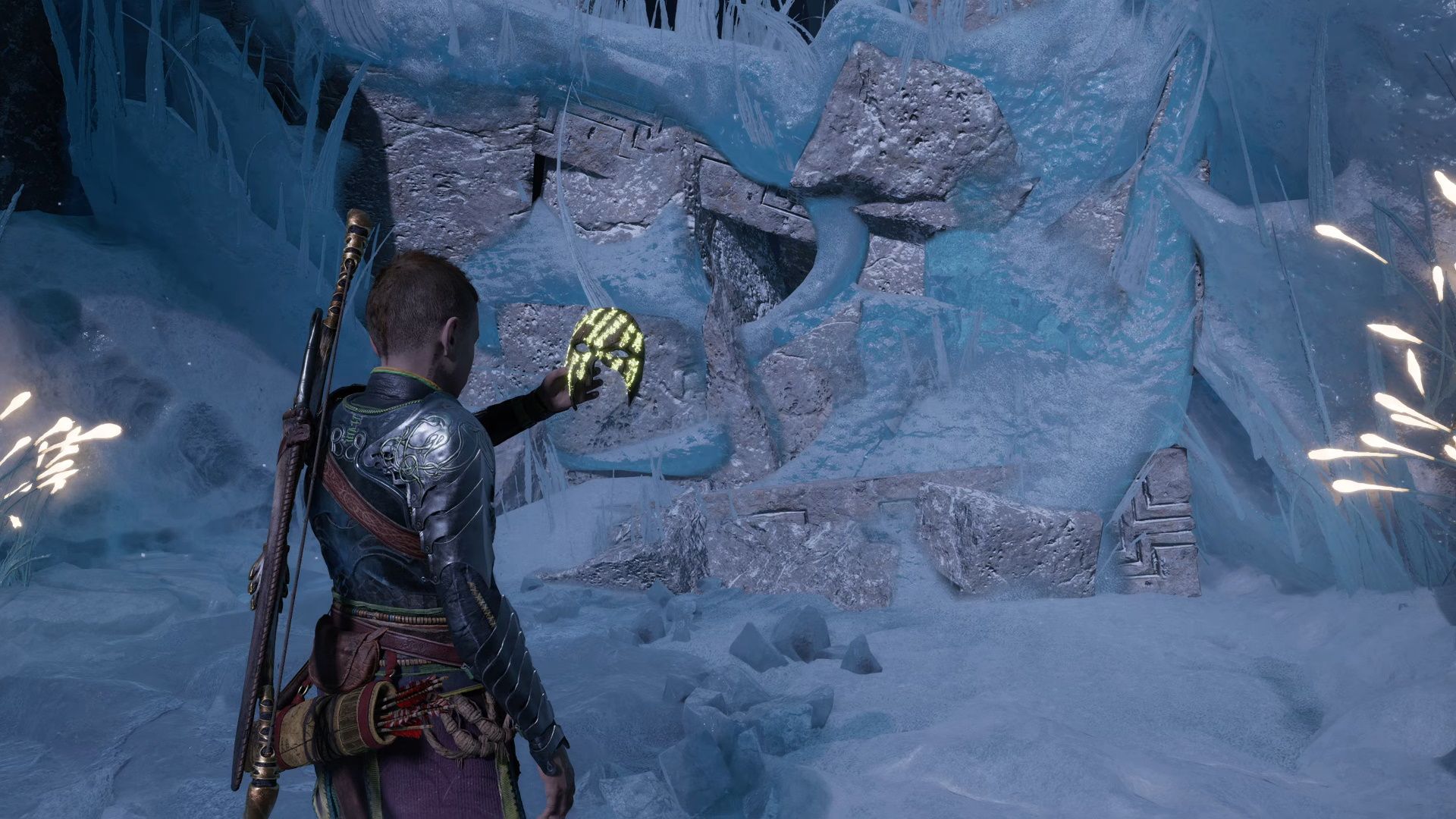 Head to the right corner of the room. Head for the wall of frozen debris in the right corner and pull out your mask. This will trigger Thor to destroy said wall. You will now head into an icy cave. A nightmare will possess a Hel-Walker, but between Atreus' excellent ability to stun, and Thor being a force of nature, this will barely even be an obstacle. Once you clear these guys out, you will run into another group of Nightmares and Hel-Walkers. Once you clear them out, drop into the large open area. It's time to tangle with a Frost Ancient. 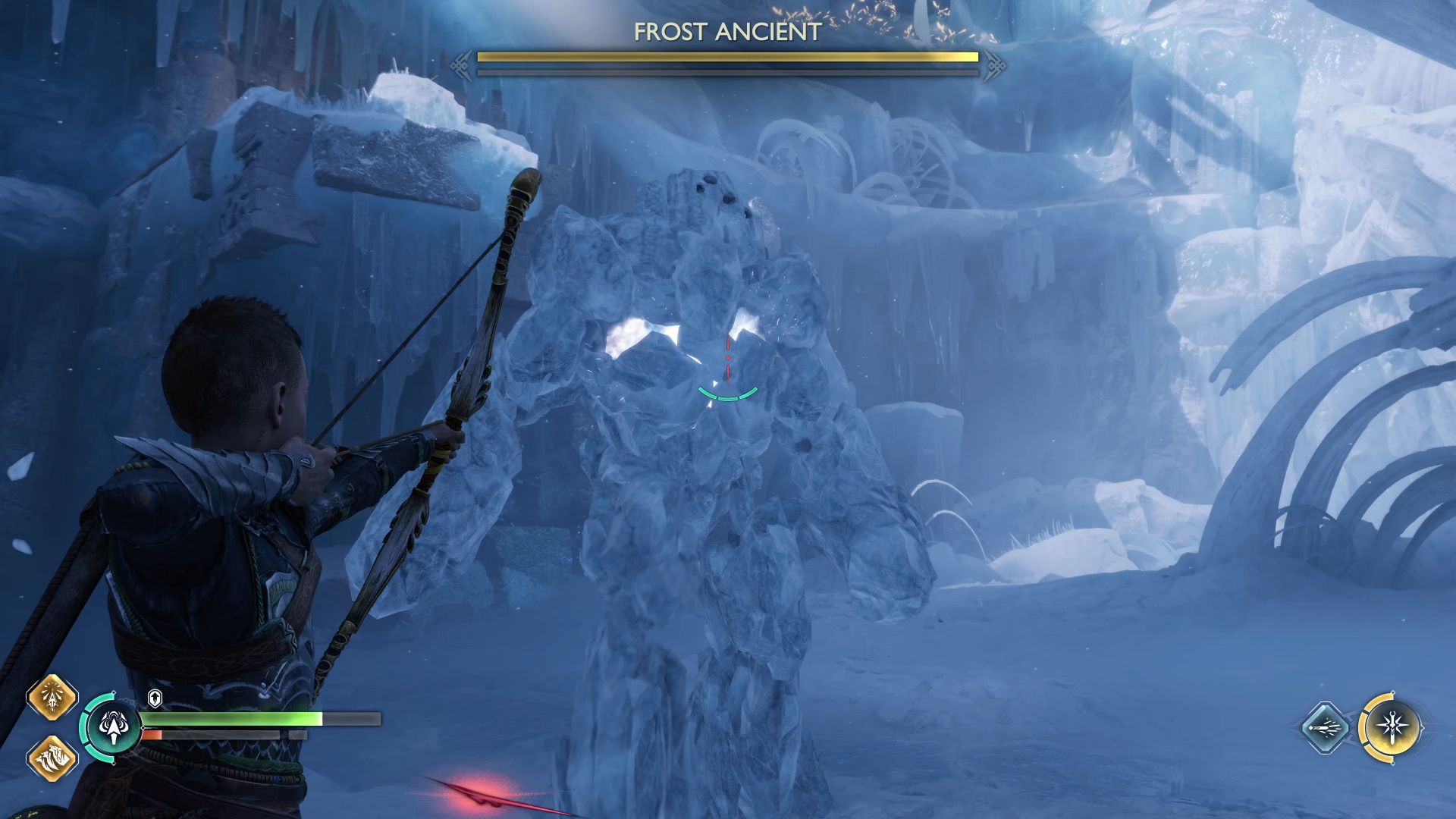 The Frost Ancient is essentially the same as the Forest Ancient you fought in Vanaheim. It has the same rock-firing projectile, and they also have a beam-based projectile attack. Also, the only time you can damage it is when its chest opens up, which is just before an attack or when they are stunned. You will be contending with a number of Hel-Walkers during this battle as well. Focus most of your attention on shooting the Frost Ancient, but fire off a few headshots here and there to thin out the regular Hel-Walkers.

Atreus is going to do most of his damage with projectile attacks, so you can fight with your back against a wall, making it much harder for the regular Hel-Walkers to sneak up on you. 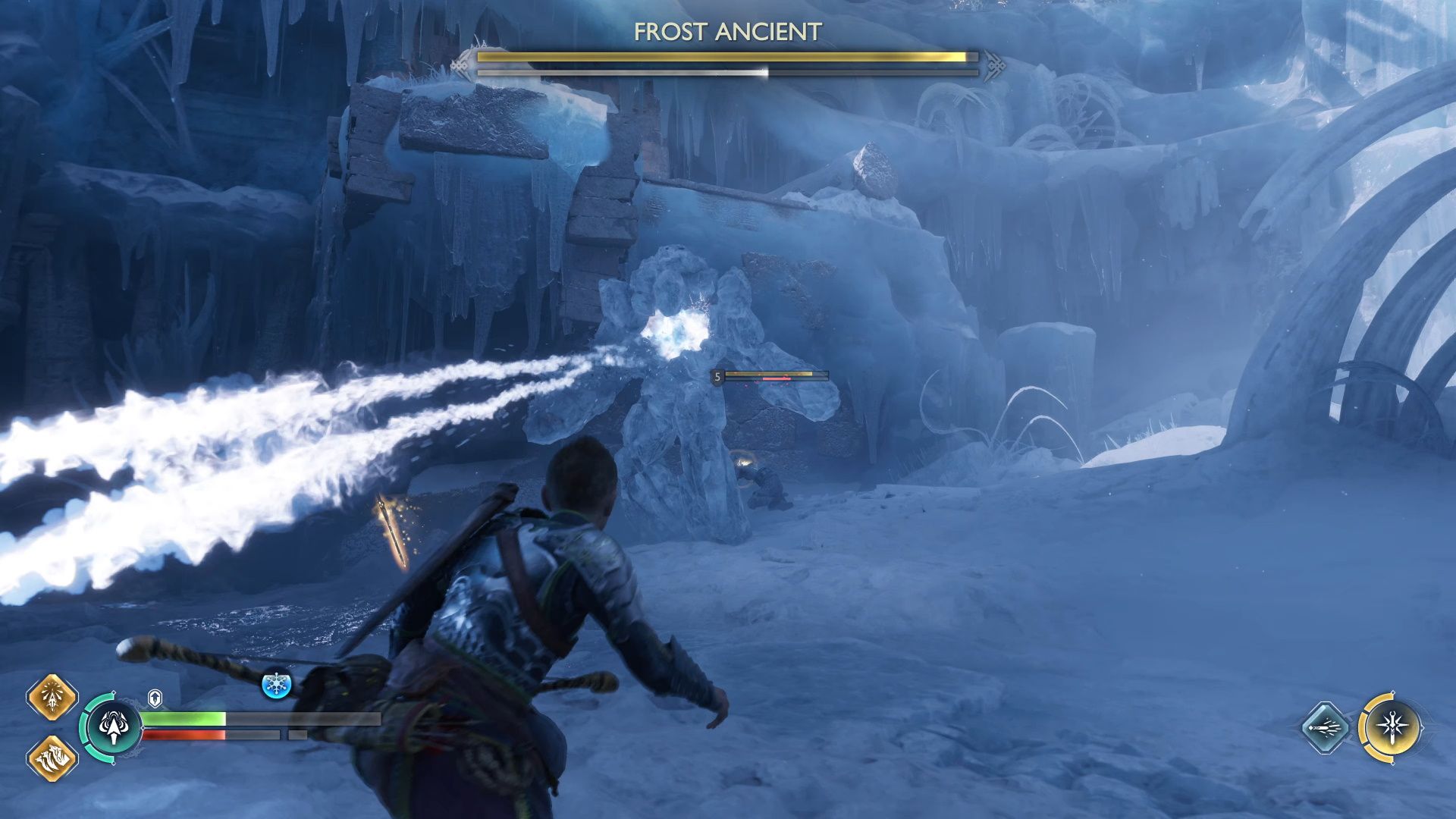 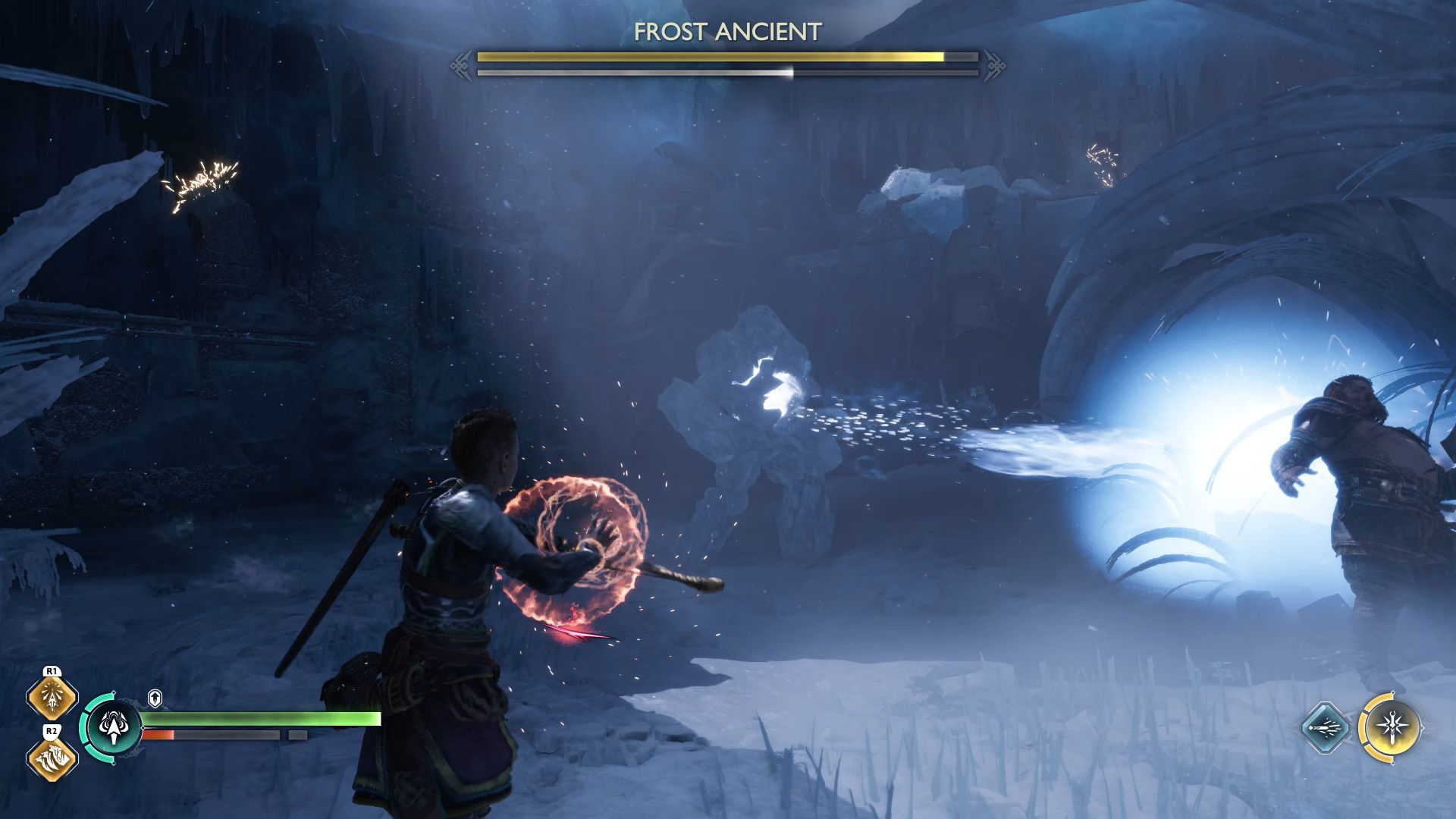 The best part about the Forest Ancient boss fight is how elegantly it highlights the differences between Kratos and Atreus. When you fight this massive golem as Kratos, you need to be pretty thoughtful with your actions, but Atreus' greatly enhanced mobility means that he is able to take more risks and dash out of the way of danger. Similarly, Atreus' projectile attacks are just radically faster than Kratos' axe throws. So, even if you don't have a shot fully charged, you will be able to loose a few arrows if you see an opening. 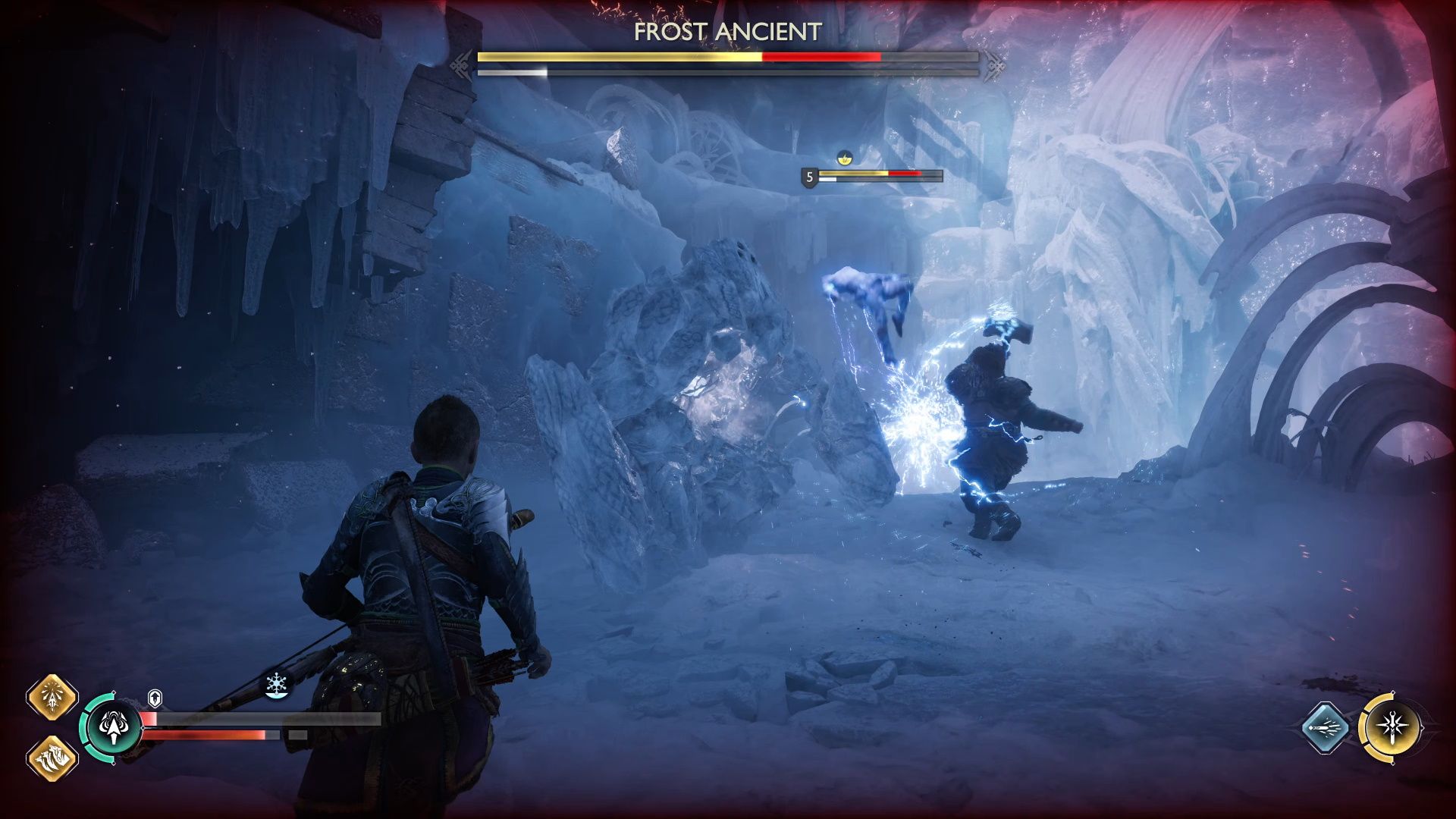 However, on the flip side of the coin, while stunning the Frost Ancient is far easier, Atreus does substantially less damage to the sentient pile of rocks. Thankfully, you aren't alone. Thor is with you. And you know what? The big guy hits hard. So, what you want to do is to stun the Frost Ancient when Thor is nearby, and kill any enemies Thor is currently fighting once you do. This will lead to Thor unloading a shot or two into the colossal creature. It only takes a handful of Thor's attacks before this boss will become Frost Ancient History. 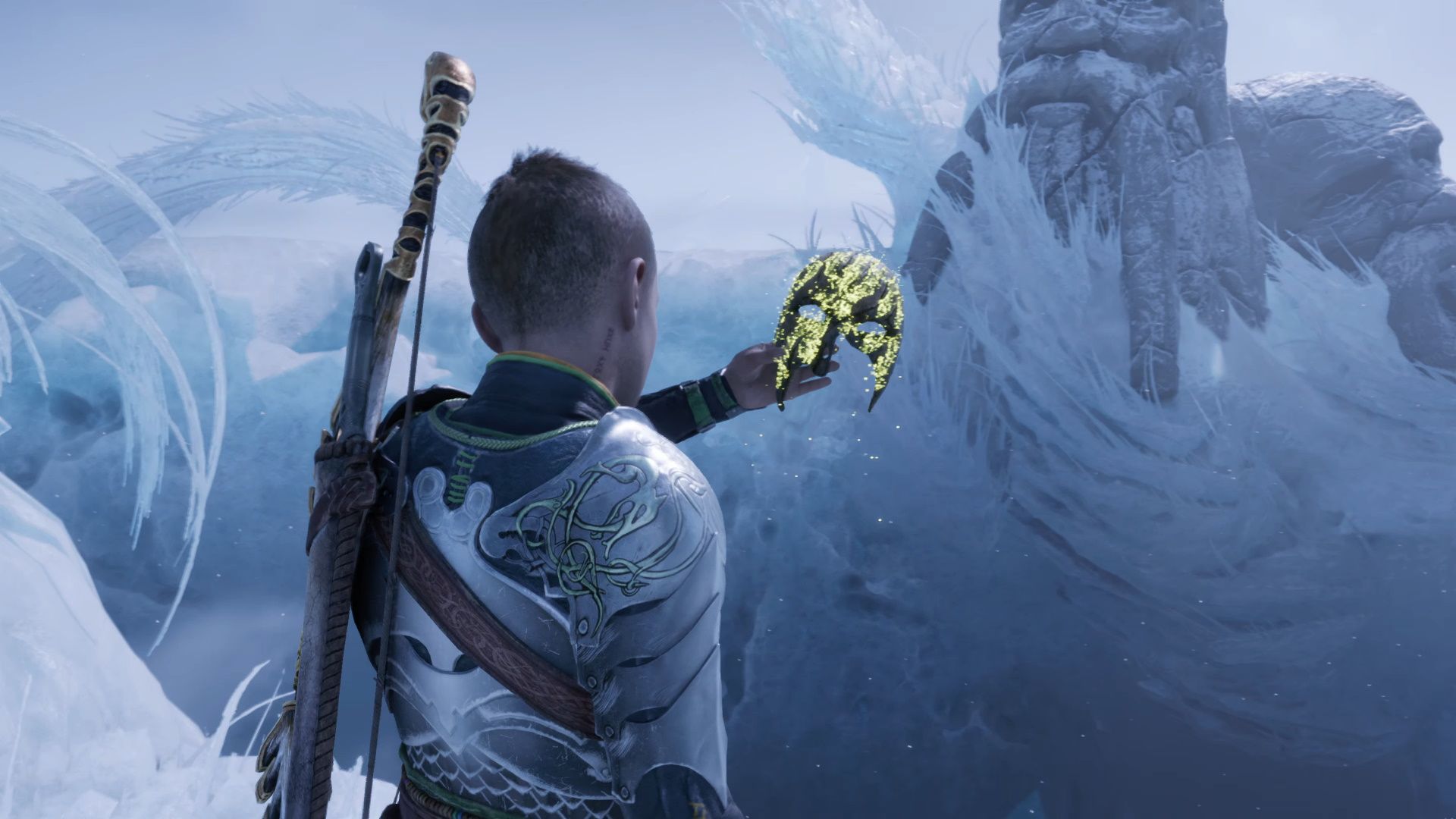 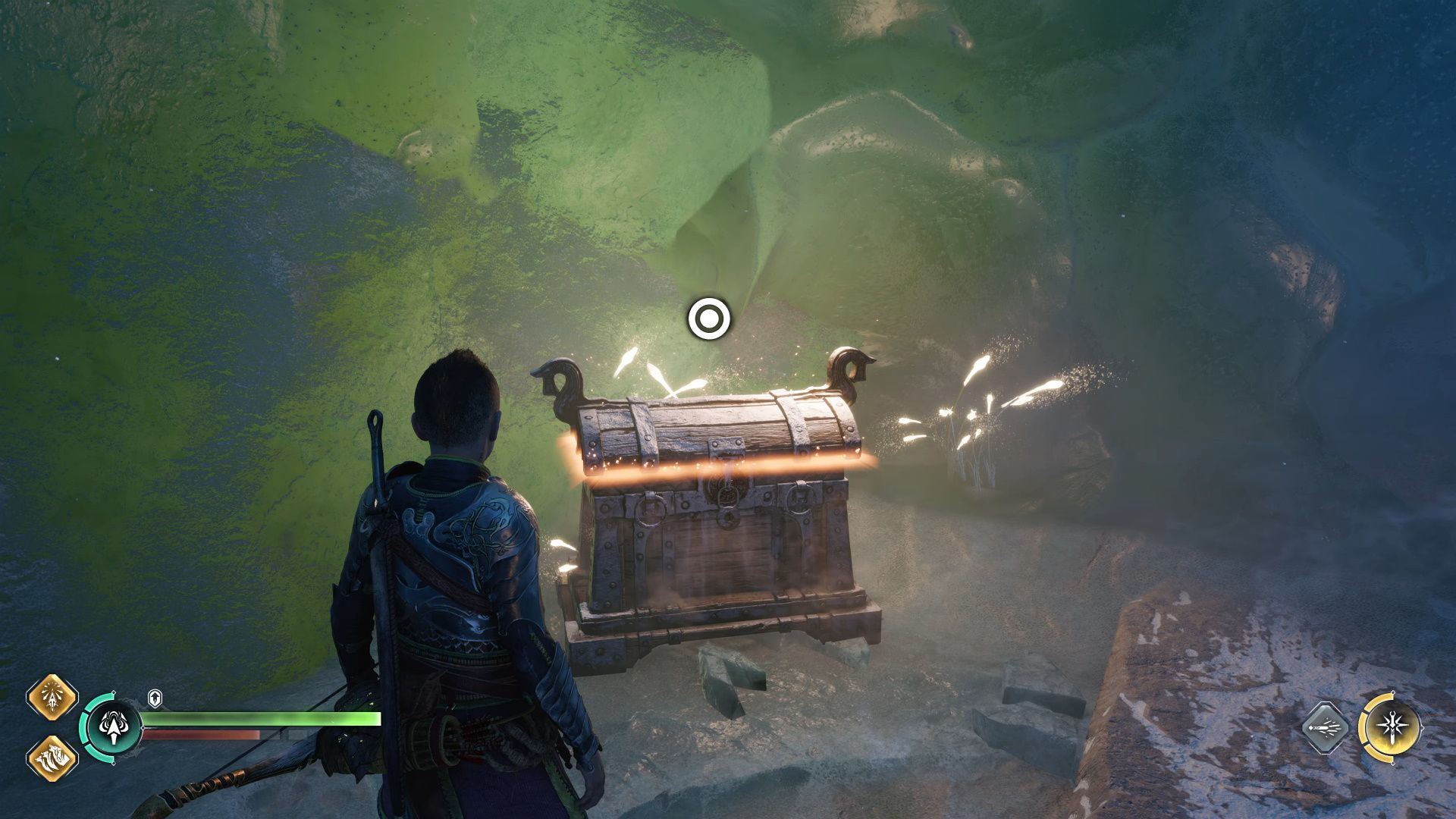 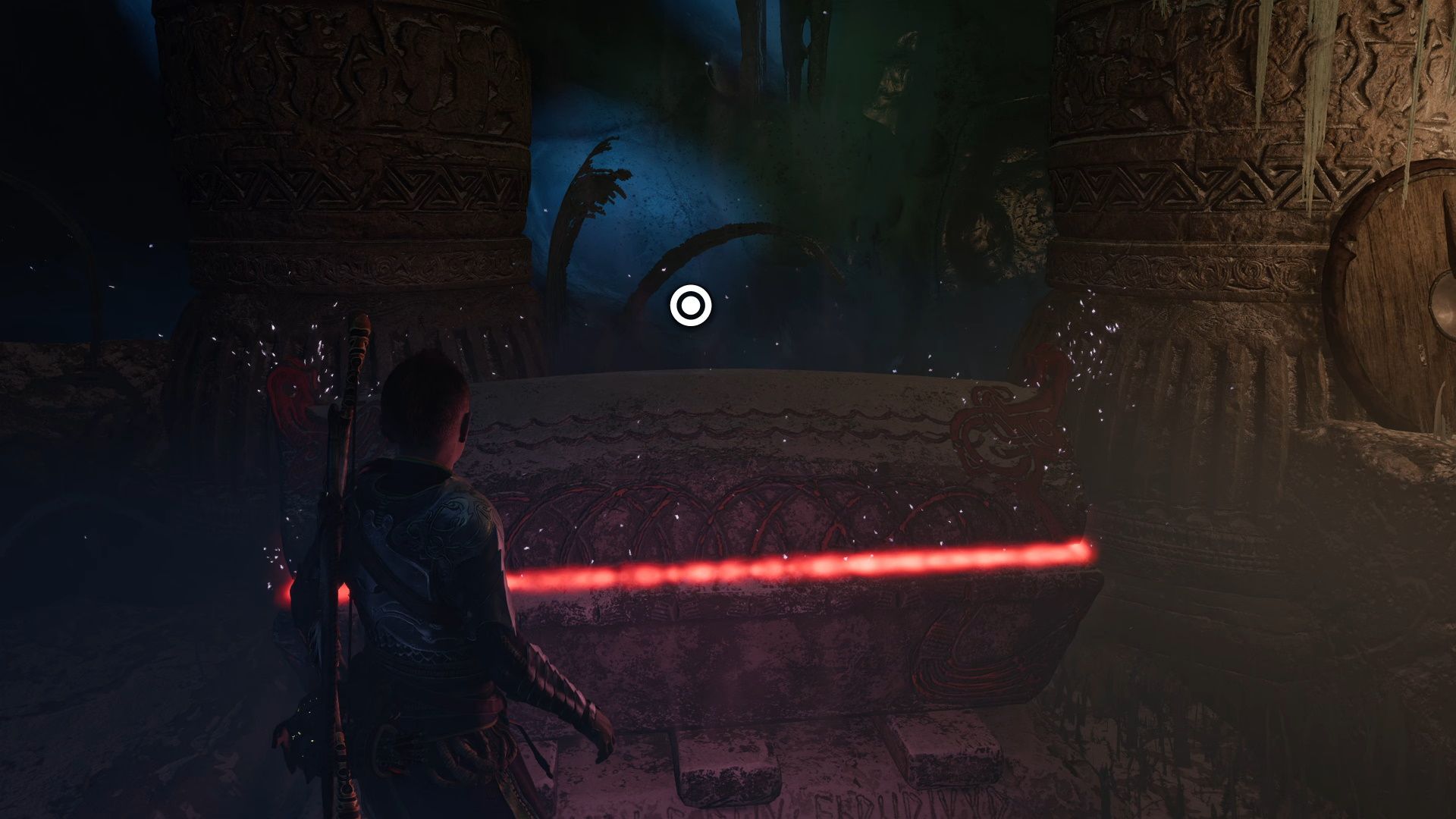 Now, meet up with Thor in the right corner of the map and take out the mask. Thor will break an unrelated wall for fun. This side area has a straggling Hel-Walker or two you will need to kill. After you do so, grab the chest that is on your left. After you do, look for the nearby drop. Hop down and you will grab a red chest. After you grab that chest, jump back up and head back to the main path. Pull out your mask again and Thor will break the correct wall. 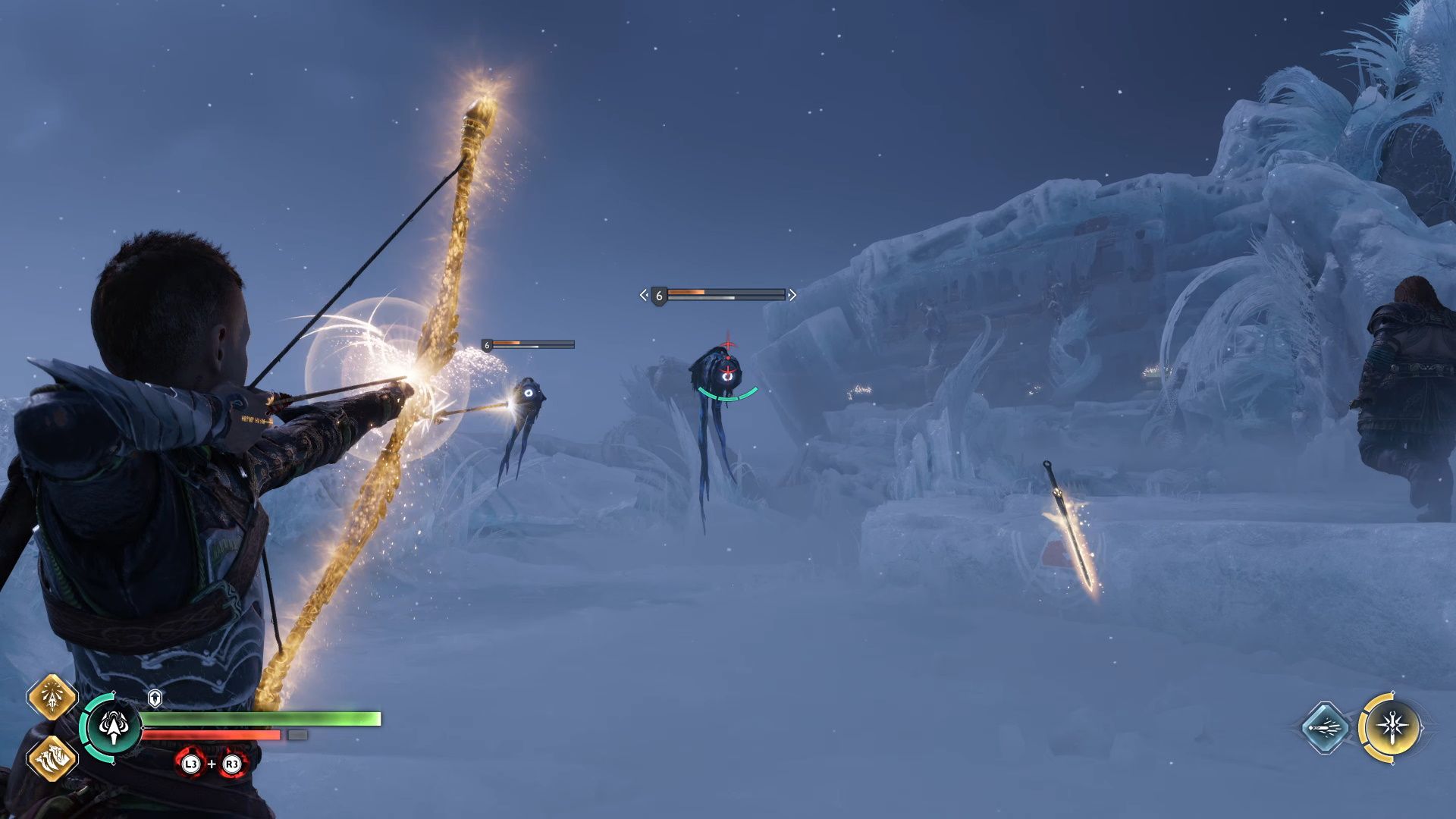 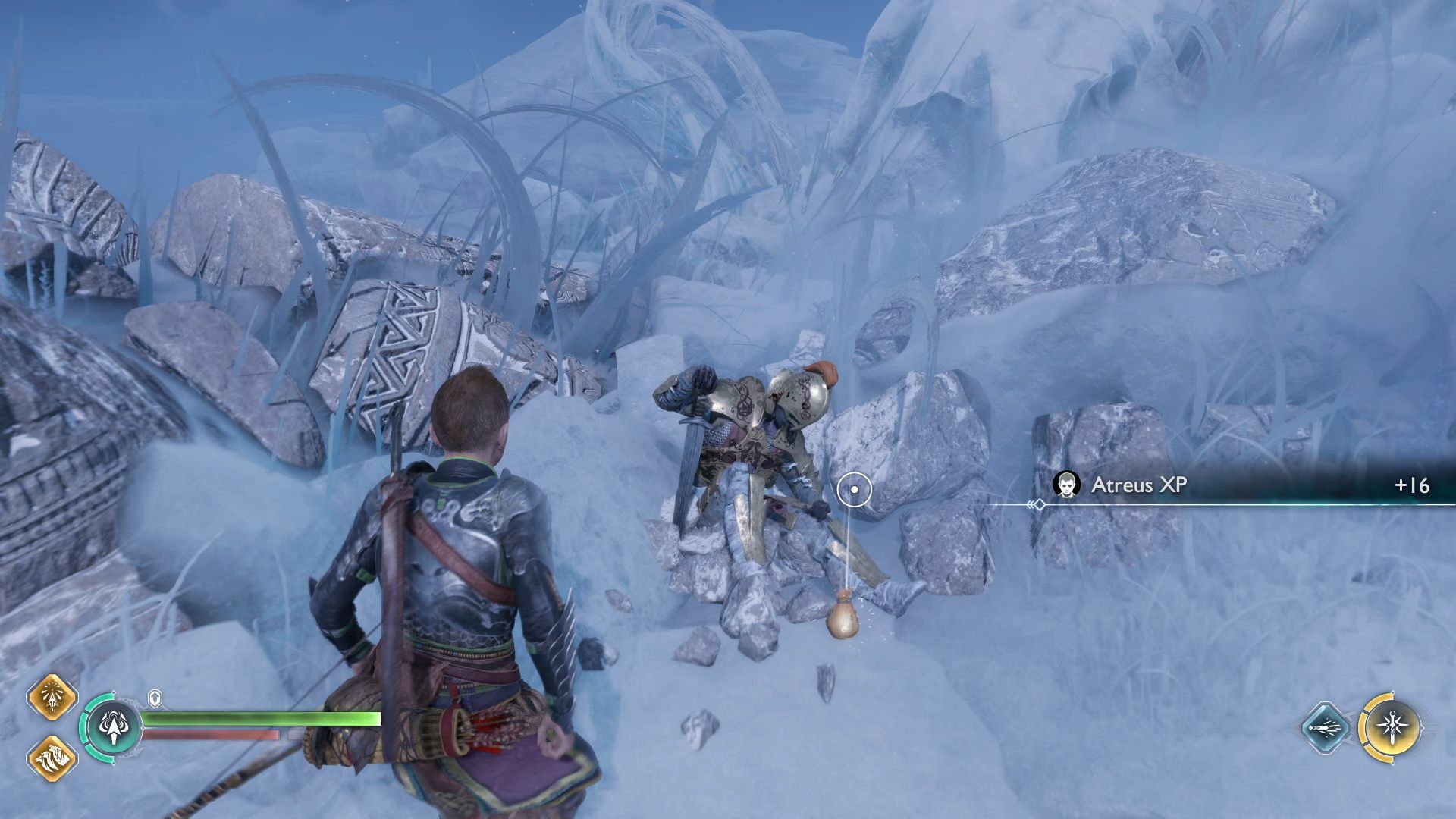 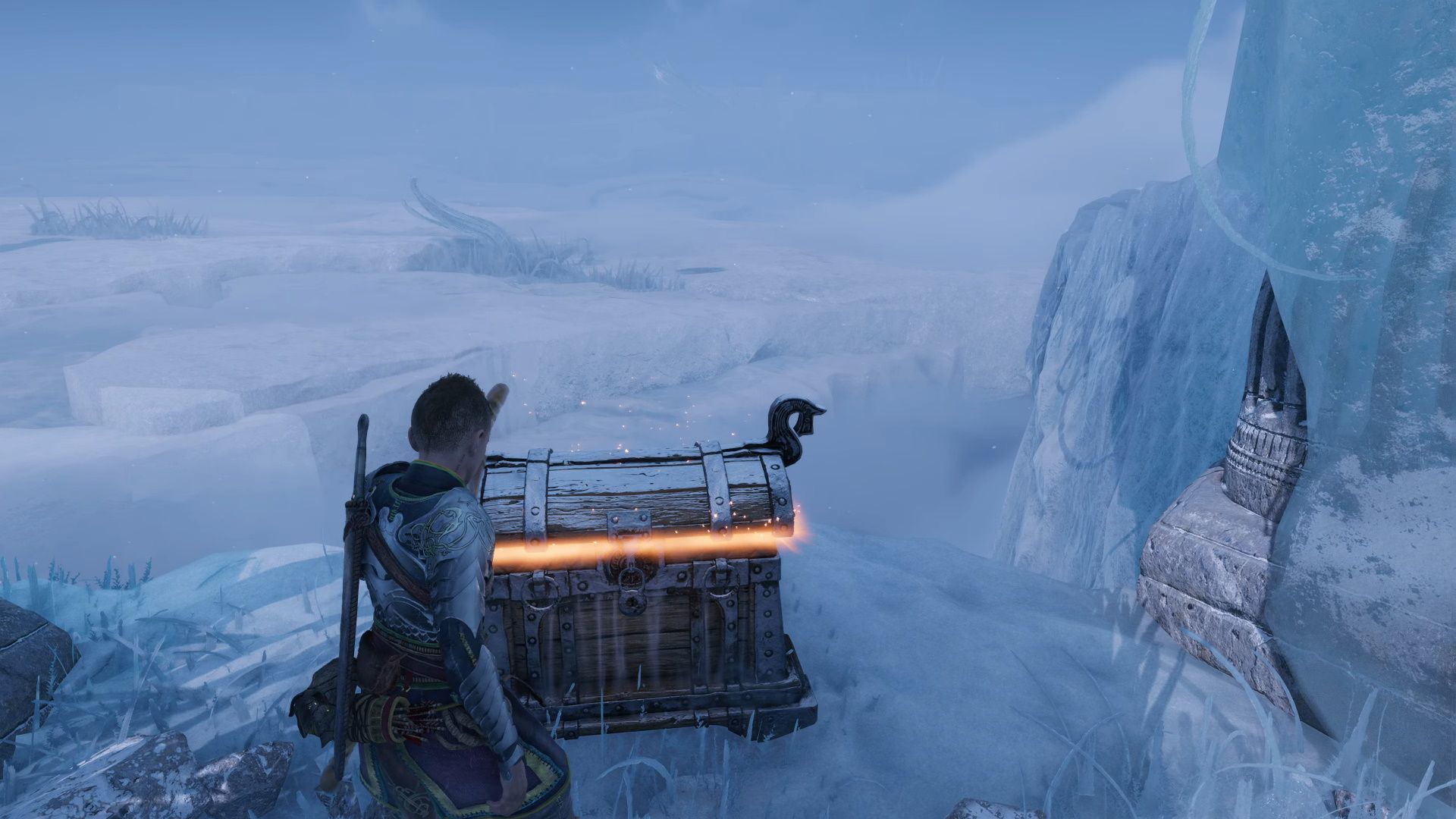 Head down the main path. You can take out the Hel-Walker on your right. There is some Hacksilver on a nearby corpse to reward you. Now, get back on the main path, and you will fight a few Hel-Walkers and a few Nightmares. Once you clear them out, head along the right wall and open the nearby chest. Now, go to the edge of the cliff and take out your mask. All that is left to do from here is to sit back and watch the cutscenes unfold. You will have finished the Unlocking the Mask section of the game.