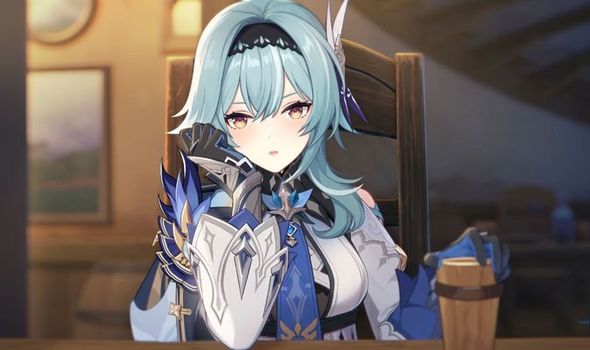 The character teaser clip, which can be watched in this article, begins with Eula drinking alone in a Mondstadt tavern.

She is approached by a mysterious figure and reveals other people in the pub are avoiding her due to her “lineage”.

The teaser video then goes on to give a short history lesson explaining why Eula’s such an outsider.

The video talks about a bygone era when the Lawrence clan – a prominent family in Mondstadt’s history – brought about a “dark era” of oppression.

Thankfully, this clan in time was overthrown by Lady Vanessa who set up the Knights of Favonius.

This all took place a thousand years ago, and the ‘flame of vengeance’ the Lawrence clan once had has failed to ignite.

The video reveals that the final straw that could have put to bed this desire for vengeance once and all for all is that a descendant of the Lawrence clan has joined forces with the Knights of Favonius.

And that descendant is Eula. The teaser video goes on to say: “Perhaps the finishing blow to the Lawrence clan was she who is known as the ‘Spindrift Knight’, most gifted descendant of the clan, Eula, joining the Knights of Favonius.

“Although the word ‘vengeance’ is always upon her lips she has proved time and again that she is a kindhearted and honourable ally.”

Eula is a cryo claymore user, and is believed to be the first new five star character for Genshin Impact since March.

The description for Eula’s character teaser video on YouTube says: “Should you be willing to share a table with a less-than-sober Eula, drinking alone in a Mondstadt tavern deep into the night, you might hear her stories about the many “scores” she’ll have to settle due to the day’s events.”

Excitement for the Eula banner already seems to be ramping up. At the time of writing, in less than a day the character teaser video for Eula on YouTube has already notched up over one million views.