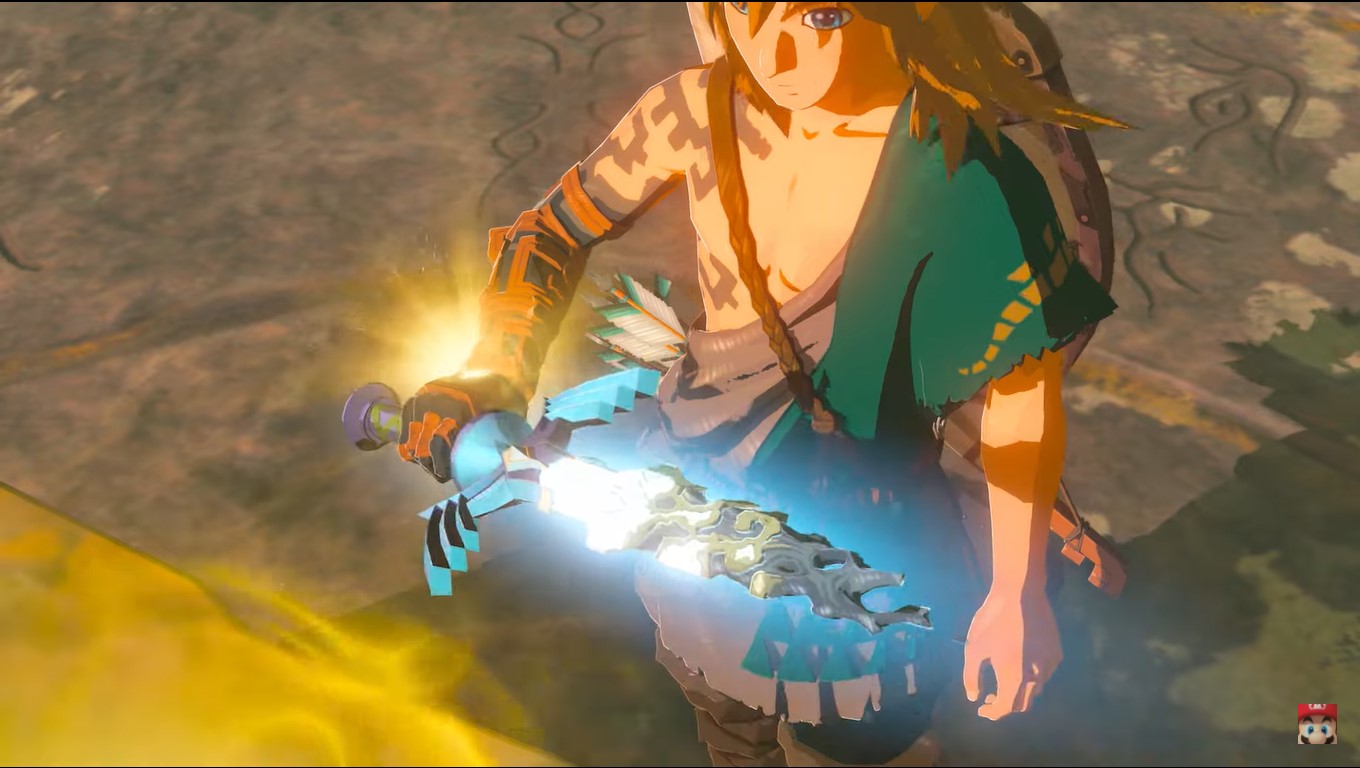 PLEASE NOTE: We’d like to run some features for Black History Month in October and are looking for writers of Black heritage in the UK, to submit paid-for features. If you’re interested, please email us at the address below.

To join in with the discussions yourself email g[email protected]

Giant-sized special
So we’re getting a 40 minute Nintendo Direct today (Tuesday)? That is an unexpected bit of good news. I thought they’d just talk about the rumoured Wii U ports, maybe have another brief Zelda tease, and that’d be it. But that’s the length of an E3 Nintendo Direct!

I know it’s easy to get carried away with that fact, and it’s always best to expect nothing and not be disappointed, but surely we’ll be hearing about some new games as well. The only game scheduled for next year is Zelda: Breath Of The Wild 2, so now would be the ideal time to reveal more new games. I’ve no idea what they’d be, but there must be plenty else that Nintendo is planning and they’ll want to give people a good reason to invest in a new Switch at Christmas.

Even if that doesn’t happen Breath Of The Wild 2 has got to be a shoe-in, I just don’t see how it doesn’t get at least a brief teaser and I’d hope and expect much more. After a desperately dull summer for games news and releases hopefully this is the turning point, or at least one good day.
Onibee

Bad weekend
I watched all of the Ubisoft Forward at the weekend but I really wish I hadn’t. I know some people are down on it but I’ve always been a fan of Assassin’s Creed and yet despite most of the show being about it they managed to announce so many games and then not really show any of them. That mobile game probably had the most footage of all of them!

There were very few other big announcements, mostly just DLC, and very little to get excited about. Ubisoft used to have a good balance between blockbuster sellers and more experimental games but they just don’t seem to do that anymore. Having Valiant Hearts come back as a mobile game was some kind of effort, I guess, but where’s the bigger budget experiments? We didn’t even get to see the Immortals sequel.

I have to say, also, that Skull And Bones looks so completely interesting, and to be honest always has. Unless it’s free-to-play, which I don’t think it is, that game is going to sink without trace. If only they’d shown Beyond Good & Evil 2 or something that didn’t look like it’d just been spat out of a random video game generator.
Robbo

Disney magic
I have to say, I was almost impressed by the Disney showcase event last Friday. It was certainly better than Ubisoft’s and probably all the other pseudo-E3 shows. The only issue is I wasn’t personally interested in much they showed, but I can’t deny that they were at least trying. I might get the Black Panther game but I have to say I’ve never been a big fan of Uncharted and I assume that’s what this is going to be but with a new coat of paint.

I’m curious to see if the new Castle Of Illusion game turns out any good but I really wish they’d revealed some Star Wars games other than just the Lego DLC. Star Wars Jedi: Survivor has got to be December now but what about the rest? I think we won’t see any more of them until Star Wars Celebration next April. I just hope it’s worth the wait.
Nighy

Biggest thing ever
Splatoon 3 is the fastest selling game ever in Japan, on anything? I know you said that it was big there but I had no idea it was that big, that’s crazy.

But if it’s so popular why isn’t more obvious? Sure, it’s not as popular here but with that level of success you’d think Nintendo would be milking it for all it’s worth, with spin-offs and cameos and so on (they’ve already got guns, so why not put them in Mario + Rabbids?).

Why wait five years for an identikit sequel and why aren’t other developers, especially Japanese ones, not churning out copycats by the bucket load? Maybe not the whole paintballing thing but at least some kind of family friendly online shooter – I can’t think of a single other one in the seven years since Splatoon came out.
Gilgamesh

My game friends as well feel the same as I do.
Anon

GC: One of our readers wrote it, it was a Reader’s Feature.

Technical support
I was very surprised to learn that the creators of Xenogears, and the Xenosaga and Xenoblade games, helped out with Zelda: A Link Between Worlds and Skyward Sword, Pikmin 3, the recent Animal Crossing games, Smash Bros Wii U and 3DS, and all three Splatoons.

More so than any acquisition made by a big developer/publisher these past two gens, I really do believe Nintendo absorbing the Japanese role-playing maestros and utilising their expertise on multiple Nintendo properties has been a monolithically complementary investment.

Those that had experienced the wondrous alien landscapes of the ambitious Wii U gem Xenoblade Chronicles X should know that they helped out considerably in creating the ginormous scale and open – ended splendour of Zelda: Breath Of The Wild’s world. And they’re currently toiling away on Breath Of The Wild 2.

GC: To be clear, they were only helping out on a technical level – usually via one of their smaller studios (they have four).

Six games and nothing’s on
The Ubisoft showcase was such a waste a time for Assassin’s Creed fans. No gameplay was shown at all and only a CGI trailer was shown.

It was all very vague and when the presenter asked when the next game was out, the director just said 2023!
AdamLion23 (gamertag)/Adam_Lion_23 (PSN ID)
Currently playing: Assassin’s Creed Valhalla

No fans
A few good letters about Nintendo in the wake of Splatoon 3. I picked it up over the weekend and it is a great game online. I actually missed the second game coming to the Switch some time after its release and while in a lot of ways it’s just another good online shooter it’s very polished and looks great for a Switch title. I always think online titles can be a bit impenetrable if you come in late in the game’s life span, so launching a new title, not just more DLC every so often, to give it a new lease of life isn’t always a bad thing.

As for Nintendo’s supposed creative malaise generally, I’ve always thought of the company as much more conservative than a lot of others make it out to be. Everyone remembers the innovations, usually in the hardware like the N64, Wii, and now Switch, and then you have the mainline Mario and Zelda titles… games which really understand gaming and what ‘play’ means in a fundamental way. However, across the rest of the range I’d hardly call it a tour de force in creativity, you’ve had all the same franchises now bar Splatoon for an awful long time, the games are great because of the high levels of polish and attention to detail.

There’s a reason you usually only get one franchise entry per hardware iteration and that’s that they need the new hardware to differentiate the titles, either through more grunt of advanced technology or control gimmicks. Mario Kart and Smash Bros. are a good example of this, the games have hardly changed since their originals just slowly getting technologically more advanced with each title. Better looking, more precision, more content… but there are no real new ideas. They don’t need new ideas really, just a restatement on the latest hardware. I’m sure it’ll be the same when Mario Kart 9 comes along on the Switch 2.

That’s why I’ve found it odd we’ve not seen new F-Zero, Star Fox, Kid Icarus, etc. titles on the Switch. The no new ideas excuse they put out for F-Zero doesn’t really hold up, especially after Splatoon 3. A lot of Nintendo projects are driven by individual creators like Miyamoto, Sakurai or Sakamoto. F-Zero and the others likely just don’t have any fans in the company to drive them forward.
Marc

Inbox also-rans
Does anyone else hate using L3 to run? I always end up doing by accident and then it never seems to work when I want. I’ve never been a fan of clicking the analogue stick in at the best of times to be honest, I’d much rather have paddles at the back of the controller.
Lamesent

Have they stopped doing the stupid present day stuff in Assassin’s Creed yet? That’s what put me off the games the most, I with they were just normal historical games.
Cuit

This week’s Hot Topic
The subject for this weekend’s Inbox was suggested by reader Gooch, who asks what is your favourite fantasy video game?

To be clear, that means anything with at least a vaguely Tolkien-esque feel, as popularised by Lord of the Rings, as well as low fantasy settings such as Game of Thrones, so it doesn’t necessary have to have orcs and elves in it.

How appealing do you find these sort of fantasy settings and do they influence what games you’re interested in, regardless of their gameplay? What more do you feel could be done with the concept and what next gen fantasy games are you most looking forward to?