My first thought when I heard Friends Vs Friends was going to be at Gamescom was one of sympathy. The game pitches itself as part FPS, part deck builder, which is a really cool idea… so cool in fact that Neon White has already gone and done it. Playing the game, any sympathy settled down as I realised how different the two were and how much Friends Vs Friends deserved to stand on its own. The only problem is getting people over that first hurdle – the gameplay is nothing like Neon White, but when your elevator pitch is the same as this year's most interesting indie game, you're going to be up against it.

In practice, the two are very different. In Neon White, you play against yourself. It's essentially a speedrunning simulator where the only aim is to beat the level as fast as possible, and you pick up deliberately placed cards around the level to use in specific ways. Friends Vs Friends, as the title suggests, is a competitive game. It's essentially 1 v 1 Me On Rust, but with deck building involved. It's a one on one shooter in an incredibly tight arena, where you're constantly trying to get the upper hand on your opponent. We played on the Rooftop level, consisting of two small apartment tower rooftops connected by a metal bridge, but there are a few more of similarly tight scope in the full game.

Before each round starts, you choose from a full deck of cards – the devs stress these will never be sold via microtransactions, though more may be made available through playable progression once the game is out. These cards each have a numerical value ranging between one and three. In your hand, you must have at least 25 cards and they must be worth 50 points or less, stopping you from overstuffing your hand with the best cards in the business. Even in just a handful of games, I was figuring out not only which cards were the best, but which ones were the best value – a key equation players will have to make. 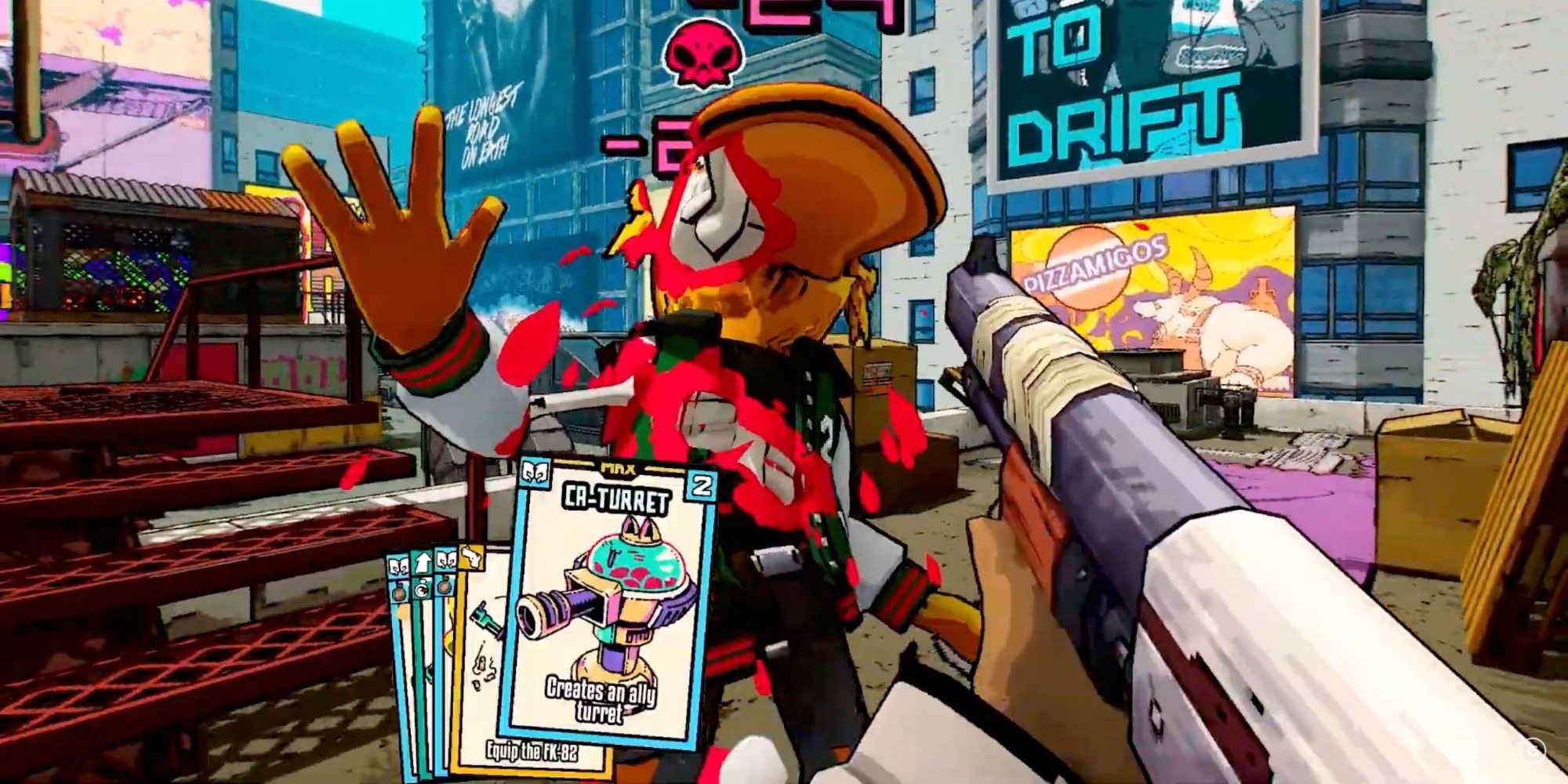 Play itself is very simple, but that's to its credit. You run around, jump, and shoot with a simple aim and fire function. The gun is just a basic pistol, although cards can change this to a shotgun, sniper rifle, Uzi, or automatic rifle for a limited time. There's also a card which allows you to swap weapons with your opponent, which is especially useful to get yourself out of trouble when you're up against it. There are other tactical cards like this, such as extra damage, extra speed, or extra resistance, as well as some sillier ones like making your opponent's head massive, stuffing their hand with bags of garbage they need to throw out, or even dropping at atomic bomb to destroy the world and transform the map into a wasteland. If the wasteland is then nuked, the whole planet is destroyed and you play on floating rocks through space.

Friends Vs Friends takes a straightforward 1 v 1 shooter and twists it delightfully with a deckbuilding mechanic. With a choice of cutesy animal characters (all with one unique card), the game does a lot with its premise and has something a little different to the much bigger hero shooters. It's a tough market to get into, and I think Friends Vs Friends might be a little too pared back to be a major hit, but it's a lot of fun and I'd love it to surprise me.