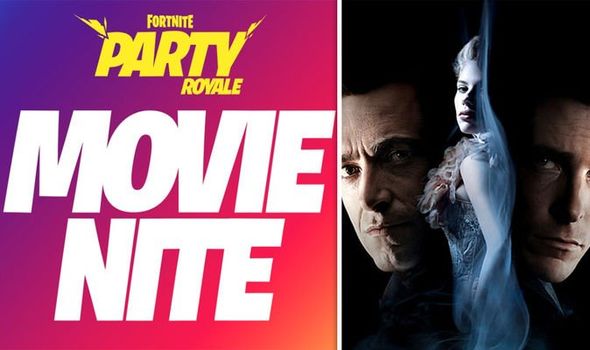 As announced earlier this summer, Fortnite fans will be able to kick back and watch a Christopher Nolan blockbuster for free by logging into Party Royale.

And fortunately there’s not long to wait, because dates and times have finally been confirmed by Epic Games.

According to a new post by Epic Games, UK fans can tune in to watch Christopher Nolan’s best film The Prestige at 6pm BST on Friday, June 26. It’s worth pointing out that the post actually says 5pm GMT, which is the incorrect time zone. Even so, it might be worth logging in just before 5pm in case Epic has made a mistake.

“Get ready for Movie Nite at Party Royale Popcorn,” reads an Epic tweet.

“This Friday, June 26, grab some popcorn and catch one of three full-length Christopher Nolan feature films depending on your region!”

Inception will be broadcast to Fortnite fans in the US, while Batman Begins will shown in countries like India and Chile.

Hopefully this will be the first of many Fortnite movie nights in Party Royale this summer.

It all begins with a guest set by Diplo, alongside special guests Young Thug and Noah Cyrus.

“Diplo returns as part of his Party Royale DJ residency to the Main Stage with the LIVE Fortnite premiere of his latest album, Diplo Presents: Thomas Wesley,” reads an Epic post.

To celebrate the event, Epic has also announced plans to re-introduce popular skins to the item shop.

“To celebrate the album premiere, we’re bringing back some of your favourites Outfits like Deadfire, Desperado, Rio Grande, Frontier, Rustler, and Nightlife, the Knee Slapper Emote, and more in the Item Shop starting Wednesday, June 24, at 8 PM ET (the day before the show).

“Gear up for the show if you like suiting up to the music!”

Unlike the Christopher Nolan screenings, the Diplo set will be re-broadcast next week, just in case you missed it the first time.