Last Season, Fortnite had a set of weekly quests that were released every Tuesday called the Resistance quests. And this time around it's no different, although they've been given a new and more season-appropriate name: Vibin' quests.

These quests will also be released every two Tuesdays at 9 AM ET, they'll require you to establish a device uplink as well, and you'll receive 7,000 XP for each stage you complete and 36,000 XP for each part you complete. We will update this guide as soon as more Vibin' challenges are released. 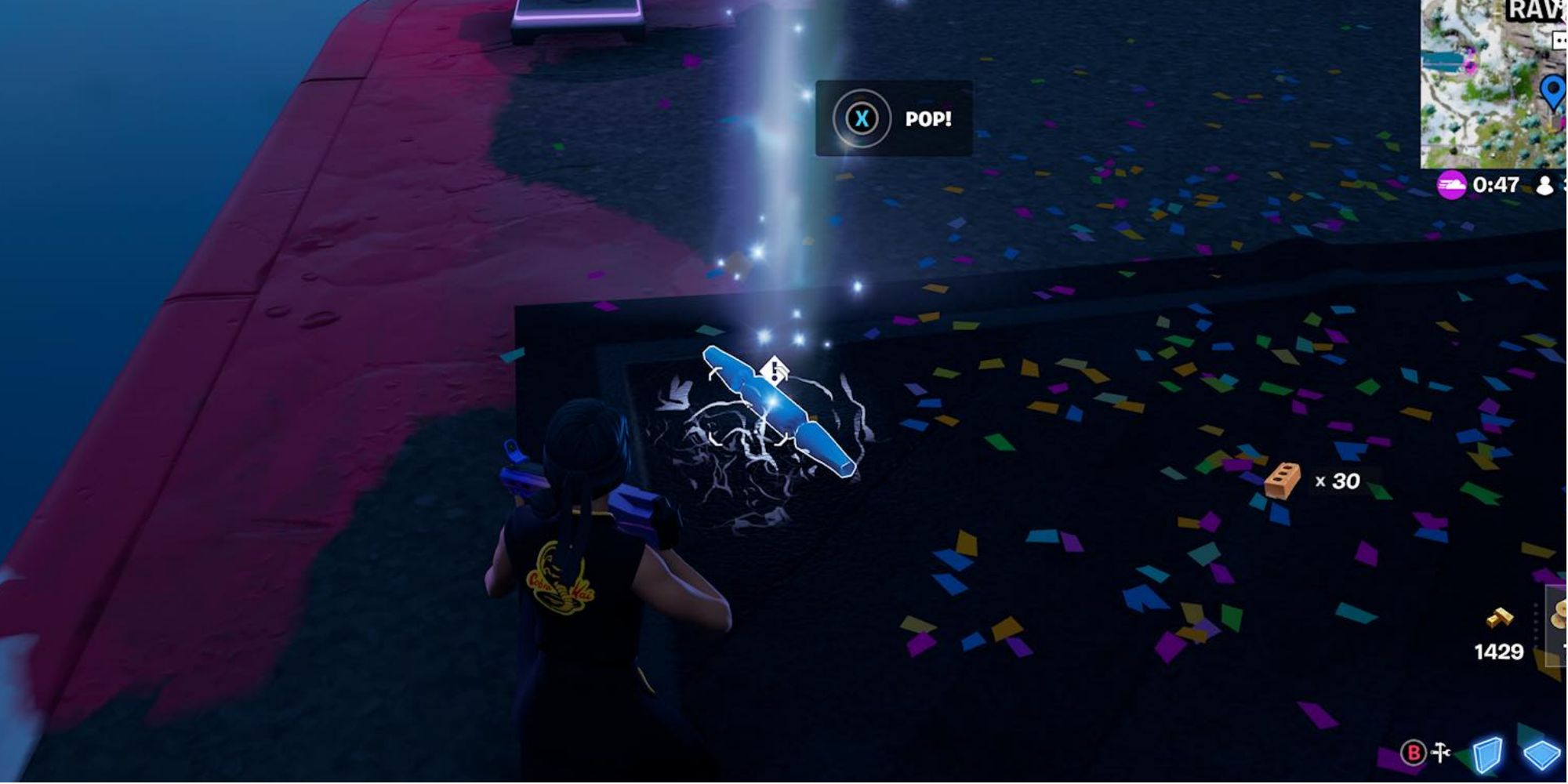 During this first week of Vibin' quests, you'll receive the first three parts of your mission. More will eventually unlock after two weeks but you'll have to complete all of these quests first before you can move on to the next part. You'll start off with a party near the Rave Cave and move on from there.

Gather six consumables to move on to the next part. Anything from wildlife meat to Reality Sapling mushrooms and produce box vegetables will work, as long as you can consume it.

There are tons of party poppers in the Rave Cave, they'll appear on your screen as a quest mark, once you approach them the "pop!" interaction will appear

Loopers are complaining that there is old IO trash everywhere, go to old IO Outposts and destroy anything you can see using your pickaxe or you can even use a vehicle to do this much faster.

You will have to spray three peace signs on structures at old IO Outposts but don't worry you won't have to go running around the map. You spray three signs at the same Outposts. To find the spray, open the emote wheel and it'll appear on the Special tab, you will also be allowed to keep it once you finish the quest.

After collecting the Reality Seed from a Reality Seed Pod, you will have to take it with you to three different POIs, so don't plant it or transplant it straight away.

Next to the lodge in Reality Falls, you will see a device that you can interact with if you approach it. Get close to it and then press the "scan Reality Tree network" button that will appear on your screen.

The root is located near the Rave Cave, just northeast of it and southwest of Logjam Lotus. If you check out your quests tab you will see it marked on your map with a quest marker. You'll have to go there and scan it. It's right in front of a giant piece of trunk coming out of the ground.

Now, you'll have to visit Logjam Lotus in order to scan the Reality Bloom.

​​​​​​​You can harvest fruit from any Reality Sapling, not necessarily only from your sapling so don't worry if you're not near it. As soon as you see a Reality Sapling, gather its fruit to continue with the quests.

There are Zero Point scanning devices scattered all over reality Falls and Loot Lake across the water, you'll have to gather Zero Point data across highlighted water areas marked on your screen once you reach the location.

​​​​​​​There are only five Imperial Docking Bays which is exactly where you'll have to go to get a Star Wars weapon. Each docking bay has a certain number of chests that can spawn and you'll have to loot them to get the gun. There's a docking bay between Seven Outpost II and Logjam Lotus, one just north of the Shell or High Water maze, another one on the Dirt-Cut Circuit, south of Coney Crossroads, and one on the Perch, east of the Joneses.

​​​​​​​Lastly, you'll have to defeat Darth Vader. He is considered a boss, so he can be very difficult to defeat if you go in unprepared. To find Darth Vader you'll have to see where his airship lands at the start of the match when it flies by the Battle Bus at the start of the match. And, once the airship lands it'll also emit a very visible glow that can be seen from a distance.

After you've gathered enough materials, shields, and weapons, go and attack him as best as you can. He will use his lightsaber to block your bullets so use them wisely.