Elden Ring: How To Defeat Esgar, Priest of Blood

Esgar, Priest of Blood, is a Field Boss in Elden Ring. You encounter the boss inside the Leyndell Catacombs after activating the switch within the depths. Defeating this boss can be challenging despite his low health pool, mainly because of the two dogs he is accompanied by.

While the boss himself causes Bloodloss build-up on every attack, the dogs also can do that, so bleeding out in the fight is often common. But even if this is a three-on-one fight, it can be made easy through proper planning and coordinated dodge timings. Here is all you know you need to know about Esgar, Priest of Blood. 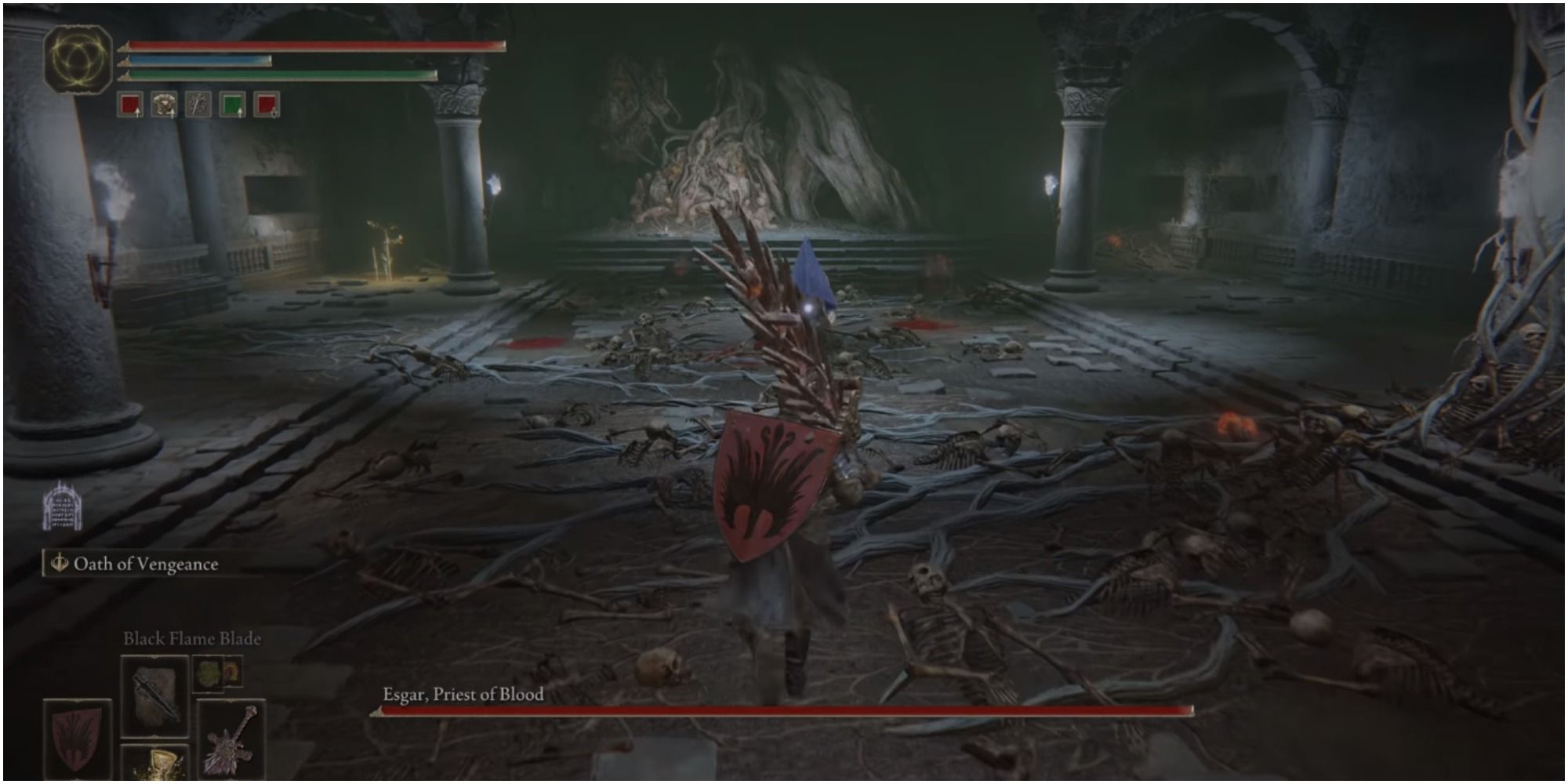 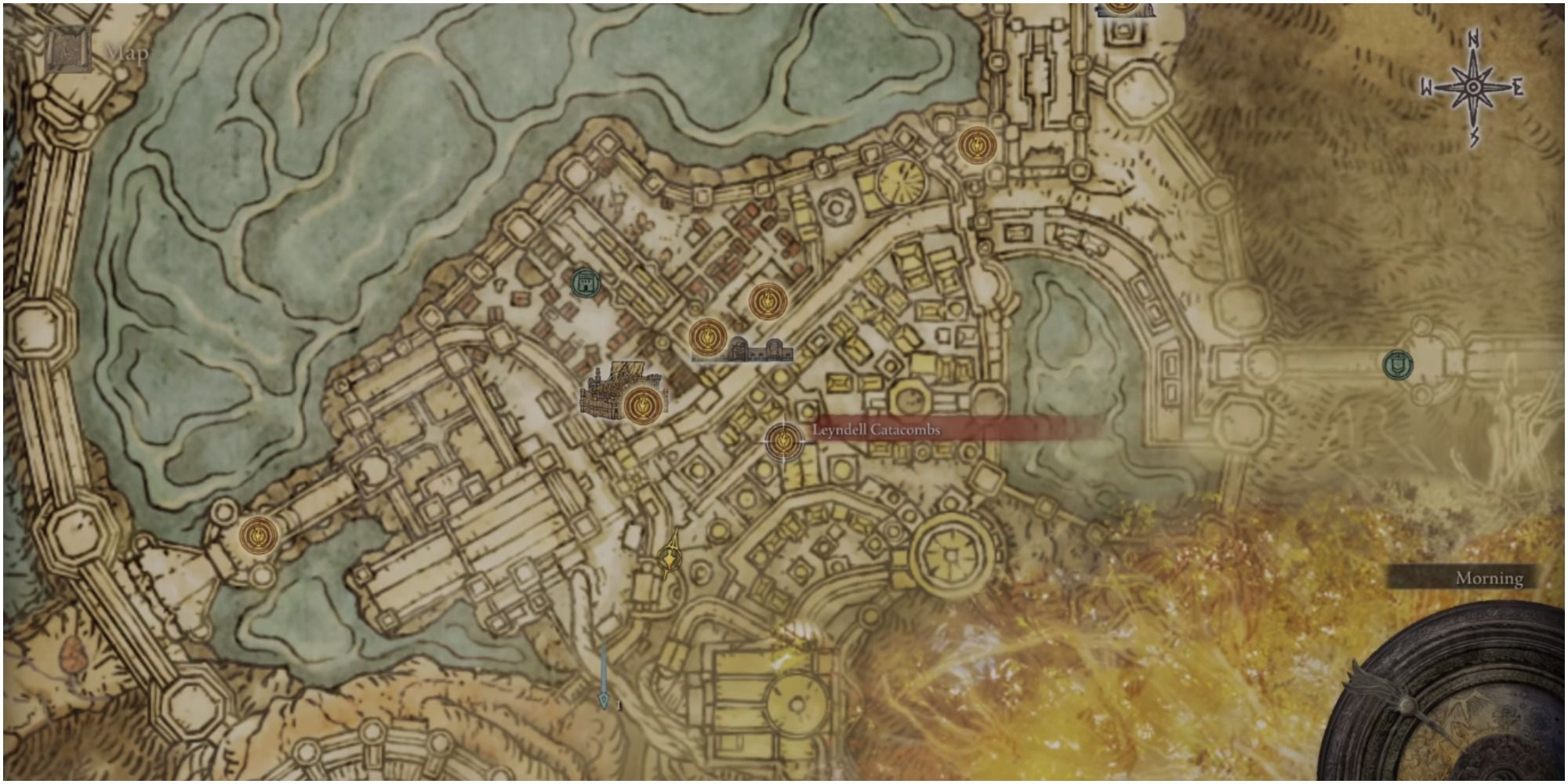 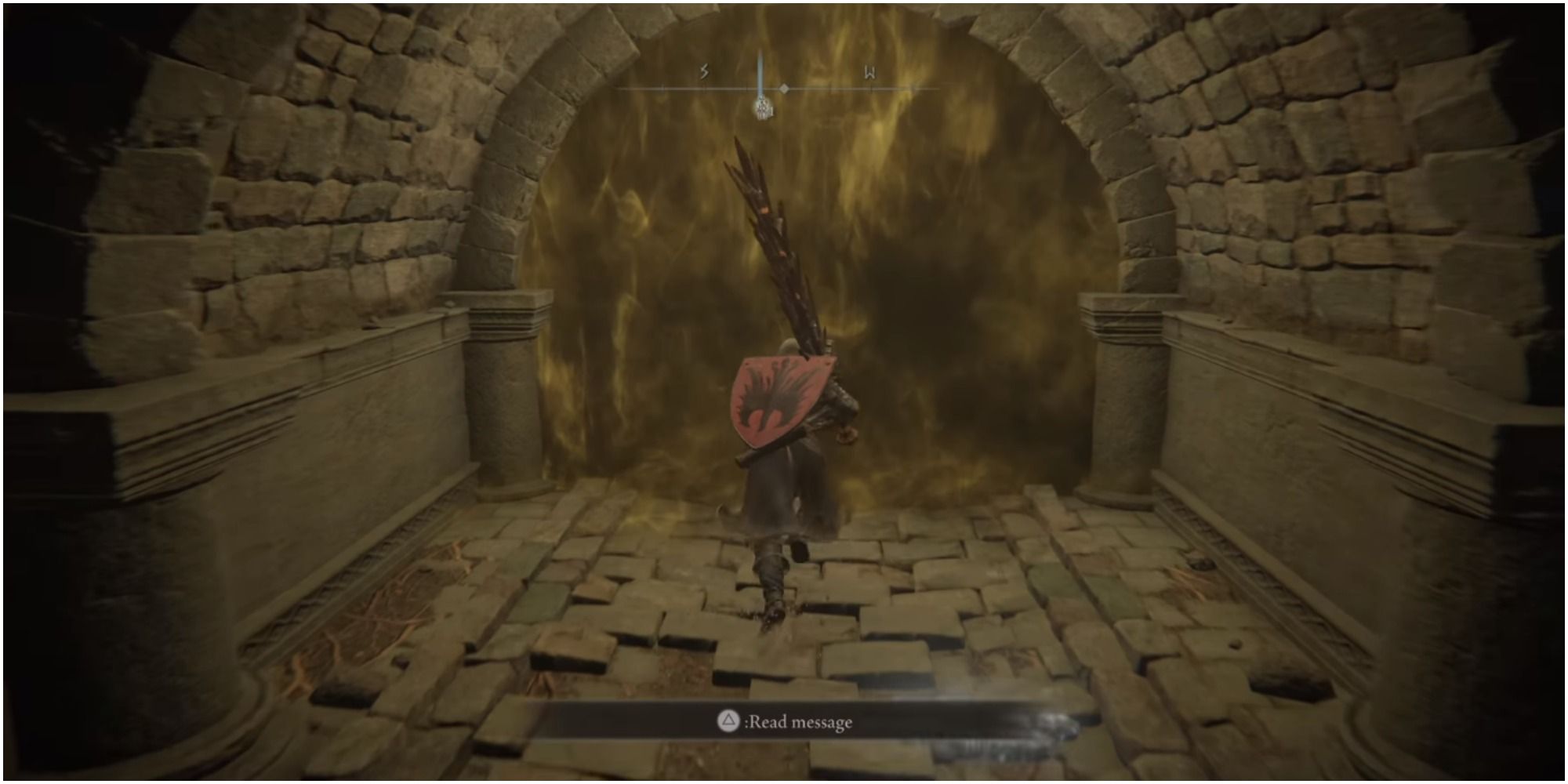 Esgar, Priest of Blood, is located in Leyndell Catacombs found within the Subterranean Shunning Grounds. After reaching the depths of the Leyndell, you will enter the Catacombs. The boss fight is optional, and not fighting the boss will not affect any ending in the game whatsoever. You can come to the fight later on in the game if you are facing any trouble. Defeating the boss will get you Lord of Blood's Exultation which is a useful Talisman to use if you use Blood weapons or Incantations. 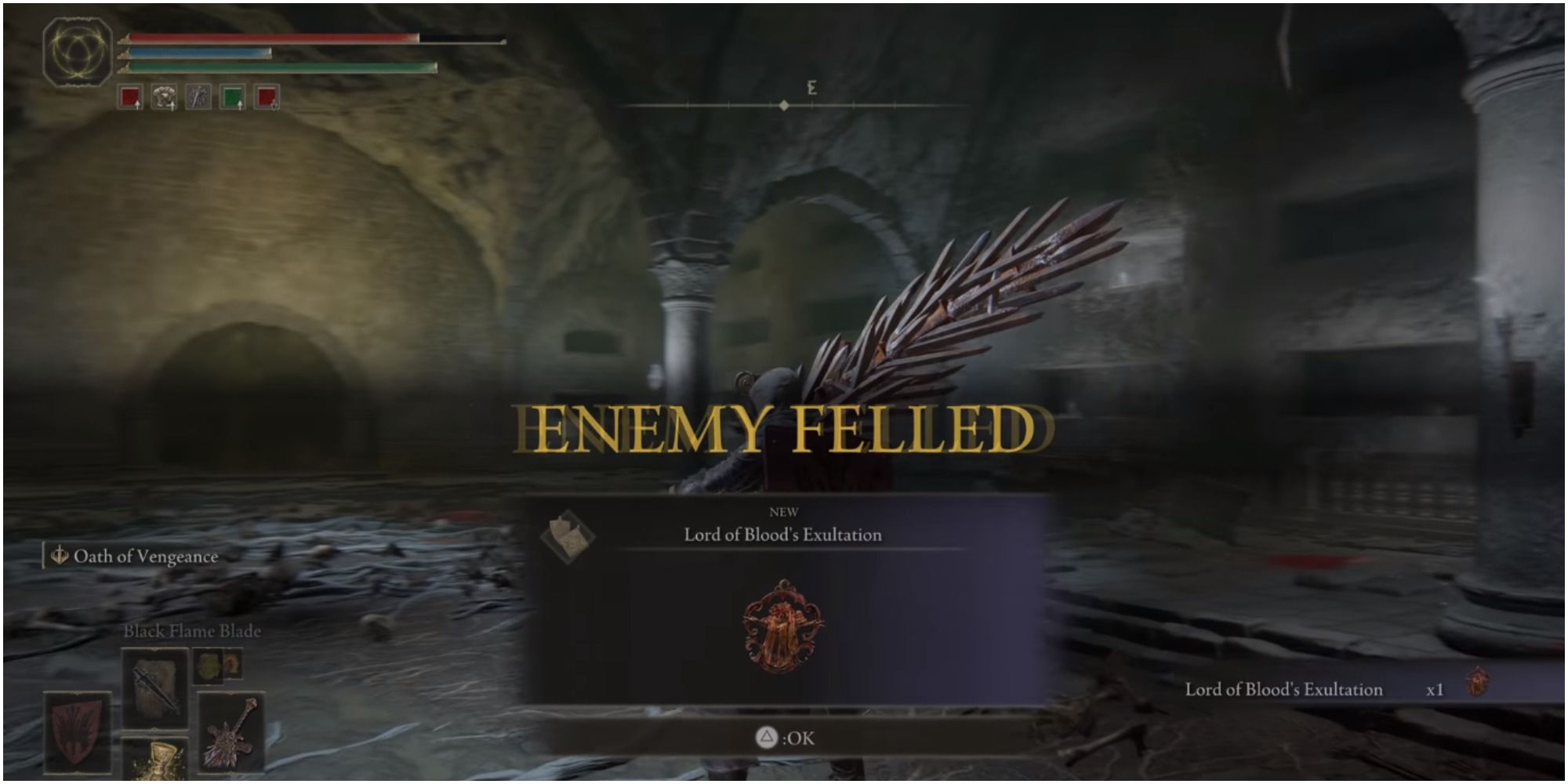 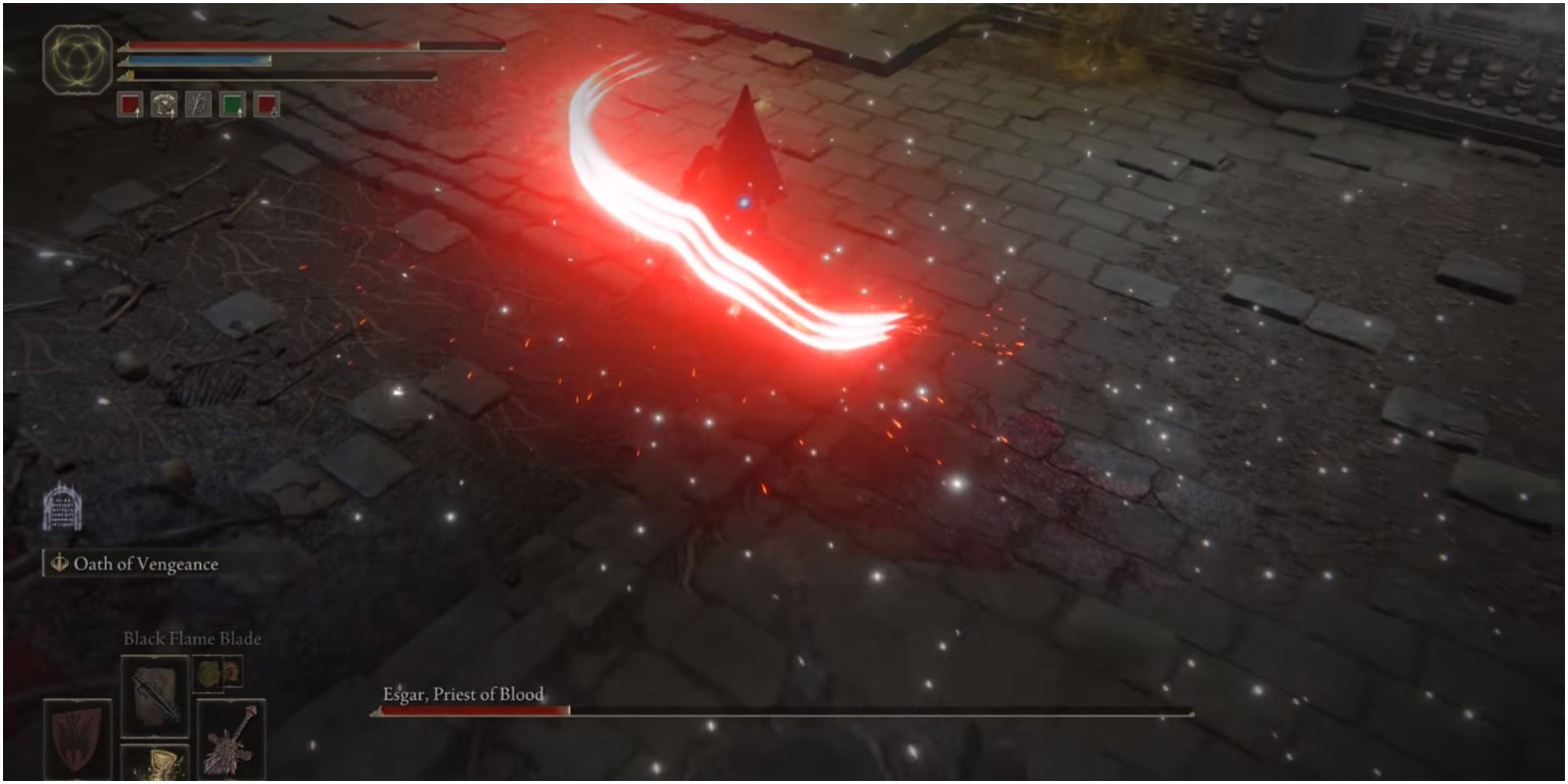 Esgar, Priest of Blood's attacks are pretty simple to dodge and do not pose much threat. However, mixing his attacks with bleed and the dogs who can also bleed makes it all necessary to avoid. 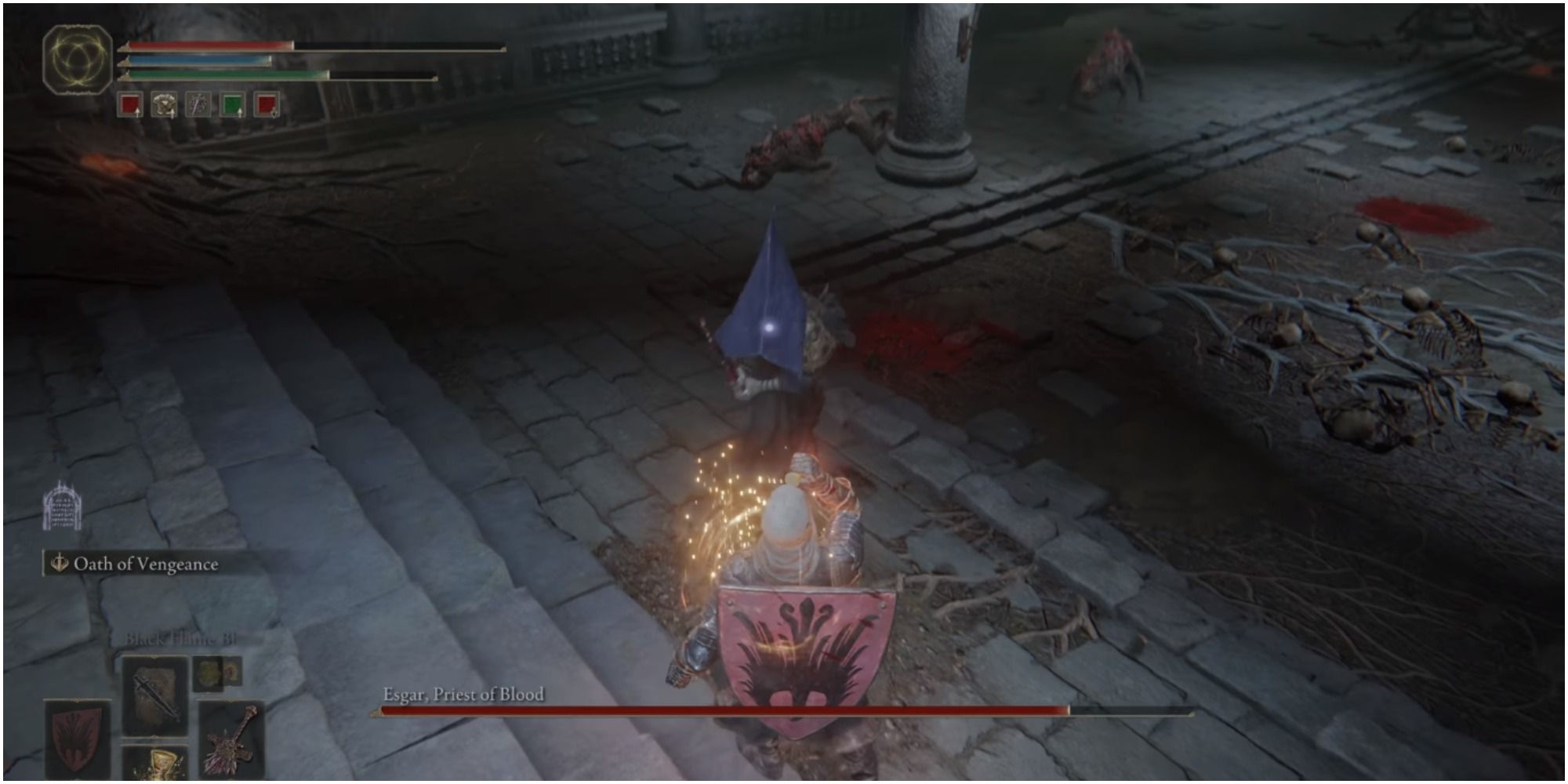 Esgar, Priest of Blood, equips his dagger dual-handed and rushes forward to thrust it, causing damage and Bloodloss buildup.

Counter: Rolling away from the boss or to either side can easily avoid the attack. 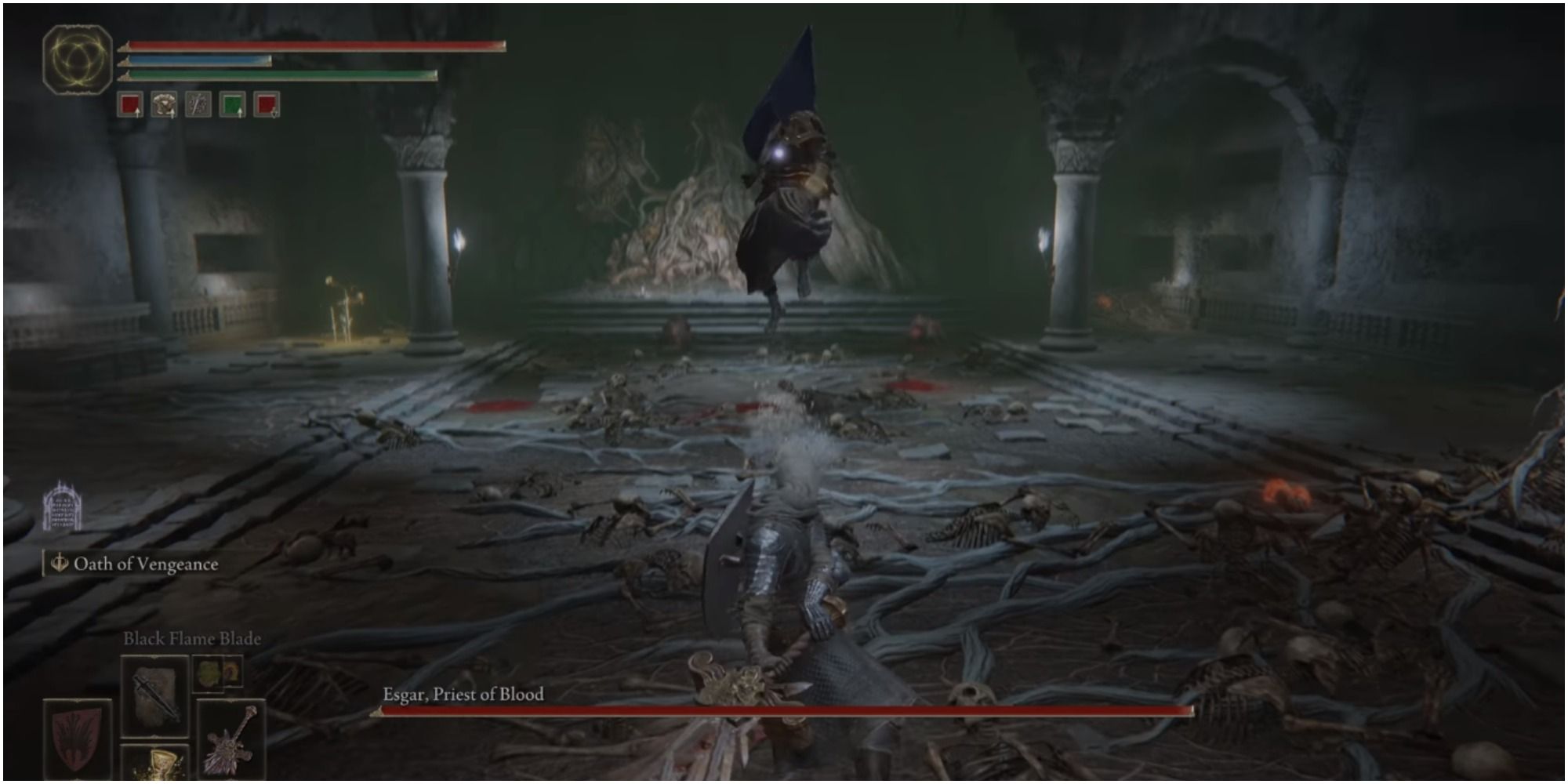 The boss jumps high in the air and performs a dagger attack.

Counter: Rolling towards the boss in this animation so that you can get a few counter hits in. 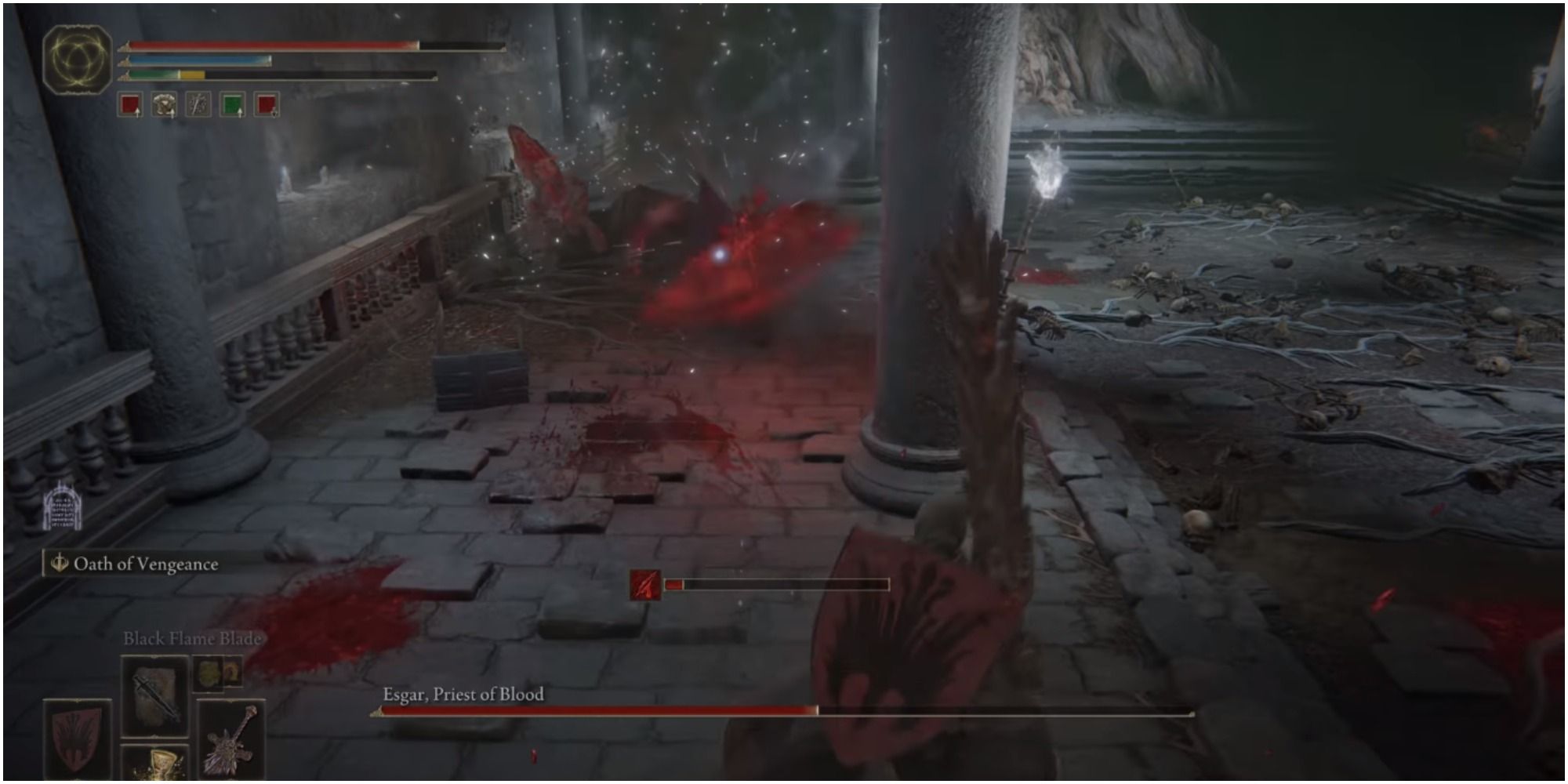 Esgar uses his dagger to throw out bloody slashes that travel out in a wide arc. He can do this two to three times.

Counter: Dodge to either side to avoid the attack. 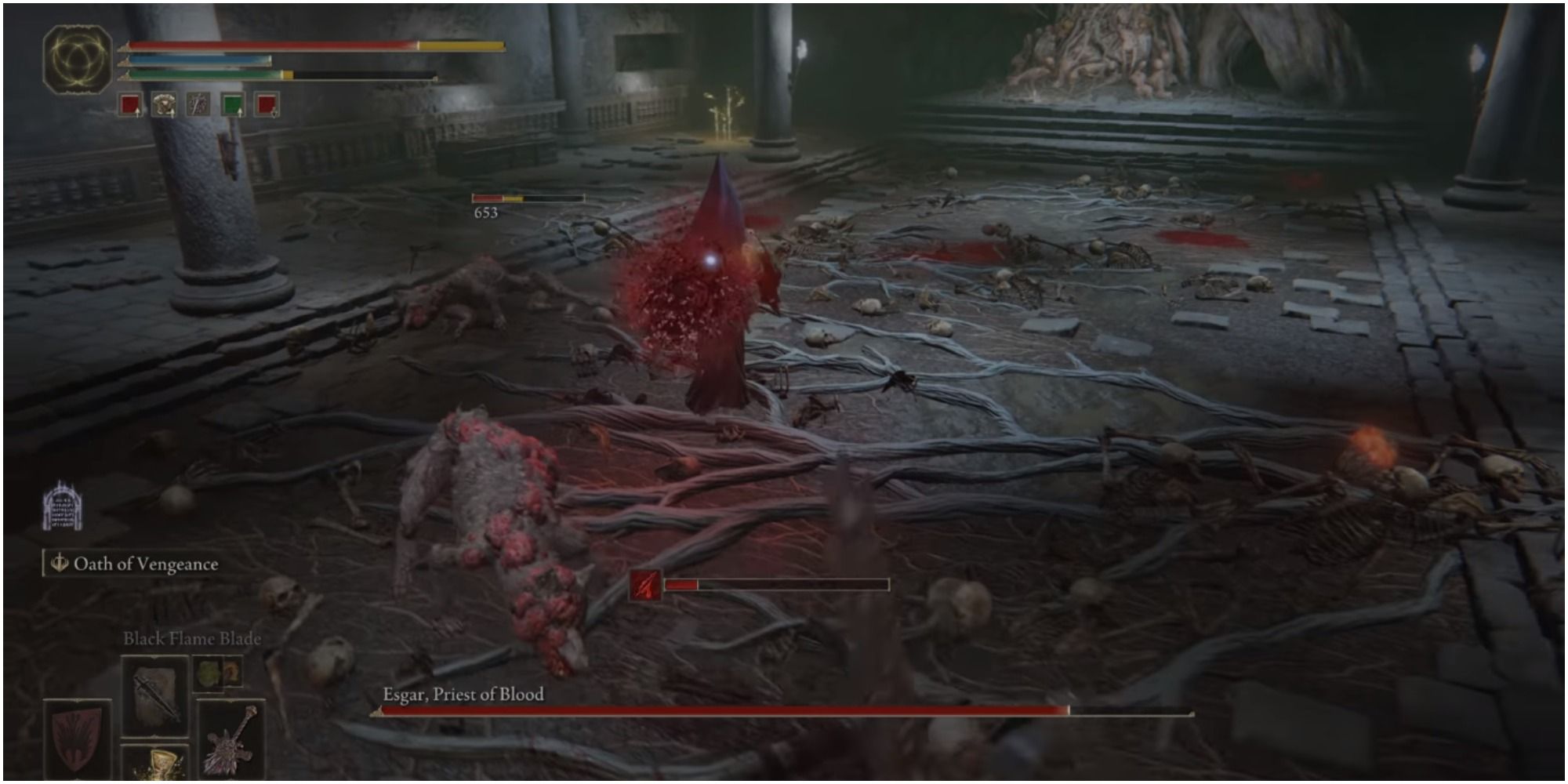 The boss releases a swarm of flies that travel toward the player causing damage and Bloodloss build-up if they are in the range of the AOE. The attack has good tracking but is slow.

Counter: As the attack is quite slow, you can roll through it and keep your distance from the flies keeping an eye on them until they disappear.

Esgar slashes the area in front of him, causing a claw mark to appear that explodes after a few seconds, causing AOE damage.

Counter: Roll away from the claw animation and stay away until you see the explosion. 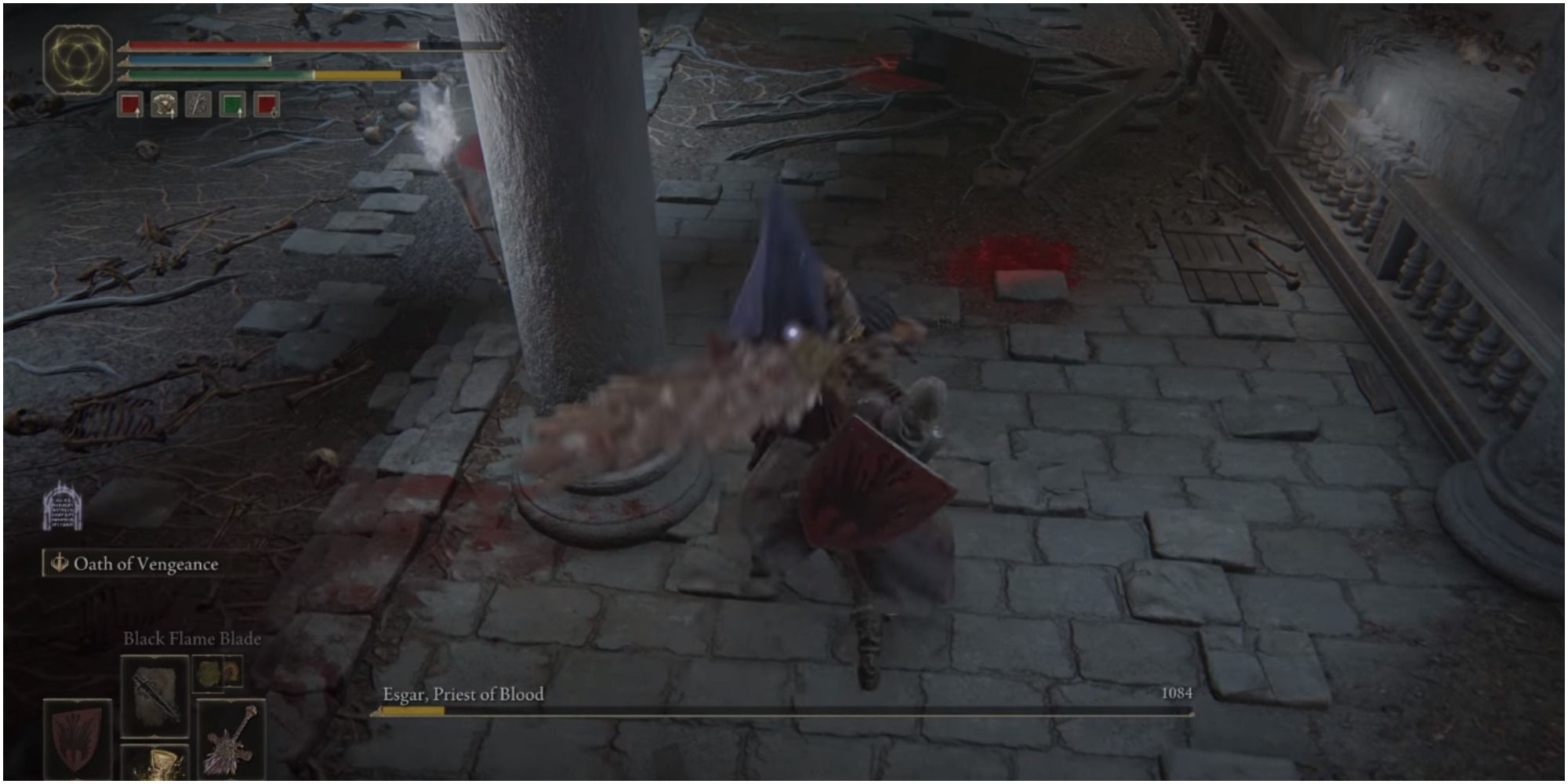 There are two strategies for this fight: 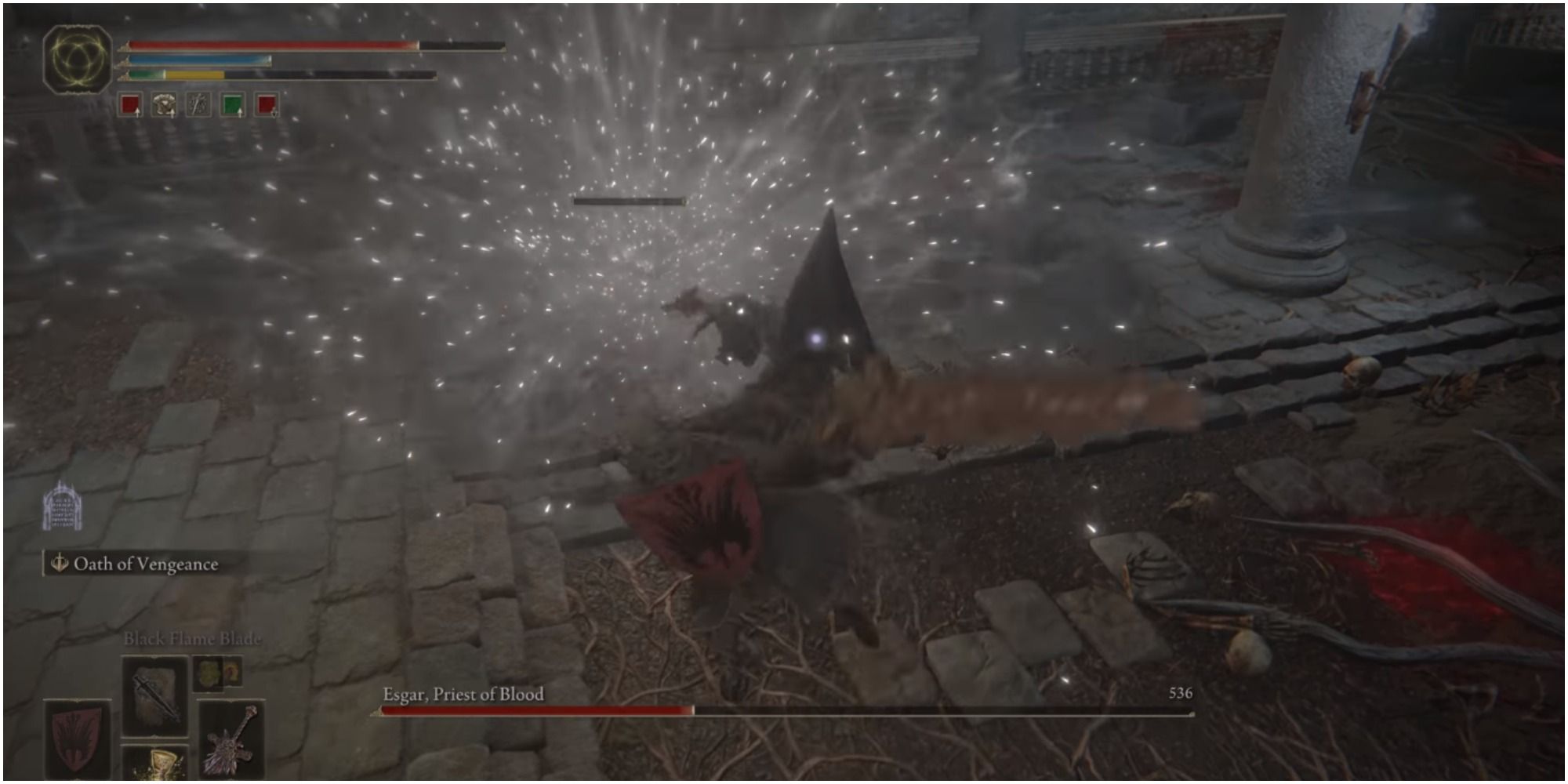 For the melee strategy, you need to split the dogs from Esgar and focus on killing them first. Taking them on all the same time is risky and can cause you to die from Bloodloss. Once both the dogs have been dealt with, then you can face Esgar solo. Using a heavy weapon can be quite useful for this fight as you can focus on all three with one strike of your Greatsword. The boss usually gets staggered from heavy attacks leading to most of his attacks being canceled. Jumping Heavy Attack can deal serious damage to the boss and can cause his poise to break relatively quicker.

Having Stanching Boluses can alleviate impending blood loss from the boss or dogs. Having resistance to Bloodloss is keen for this fight. For Talisman, you equip Stalwart Horn Charm, and for Armor Set, you can wear Hoslow's Set, both of which increase Robustness. You can acquire the Armor Set by killing Juno Hoslow as part of the final contract for the Volcano Manor Questline. 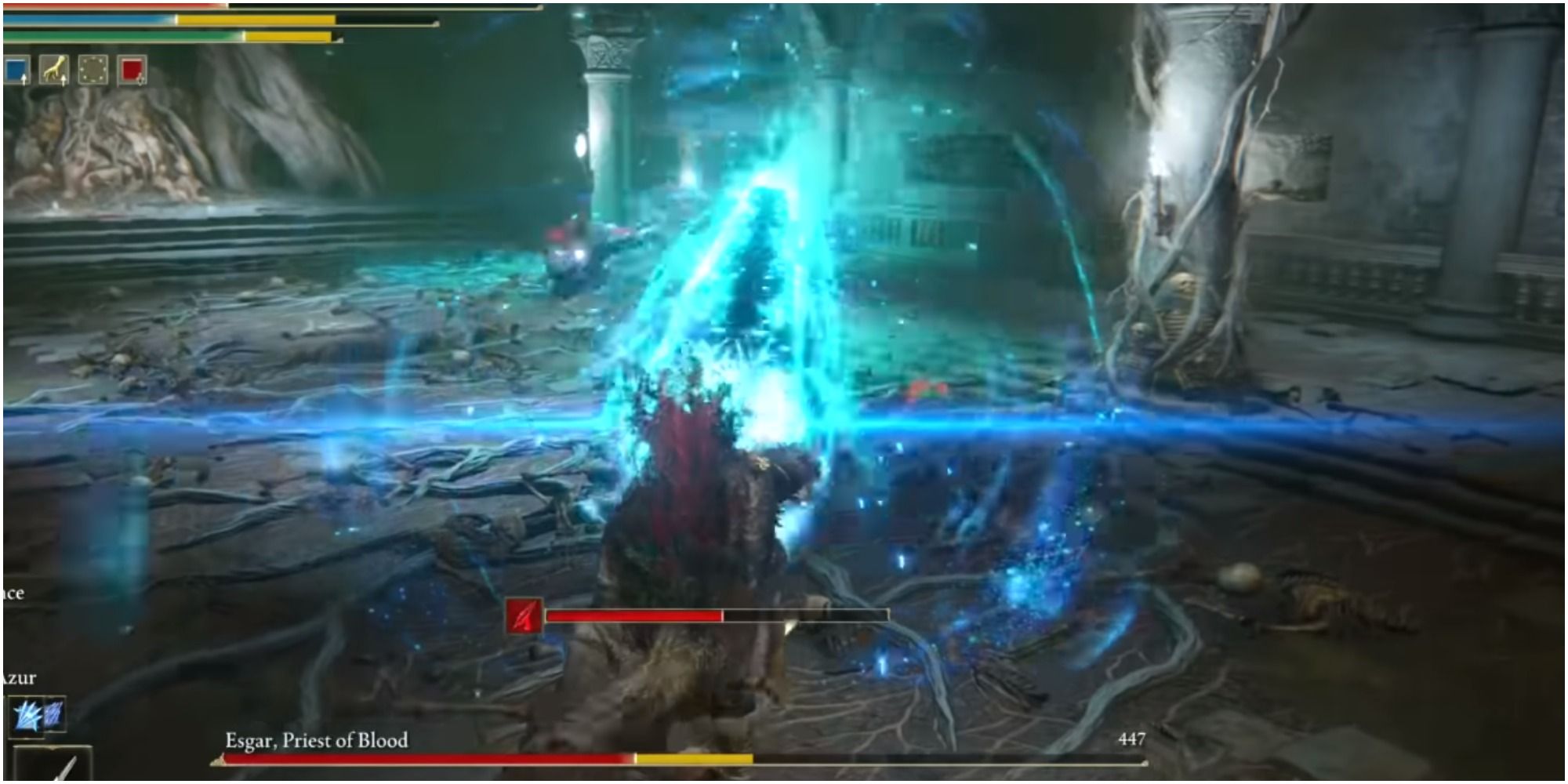 For the ranged strategy, you will want to keep your distance and spam any AOE spells you have. Make use of any multiple mob Spirit Ashes so that they can attract the boss and dogs and lure them to one side while you cast your spells. The boss can be inflicted with Scarlet Rot, so having Ekzykes's Decay can be a great option. One to two well-placed breaths can cause Scarlet Rot making the boss's health bar go down gradually over time.

The Beast-Repellent Torch is a great item that can solve the dogs' situation in this fight. It will cause the dogs to back away from you while you deal with Esgar. You can equip it in your left hand and cast spells from your right hand, and make it so no dog approaches you. The torch does not require high stats to use, so all classes can use it. 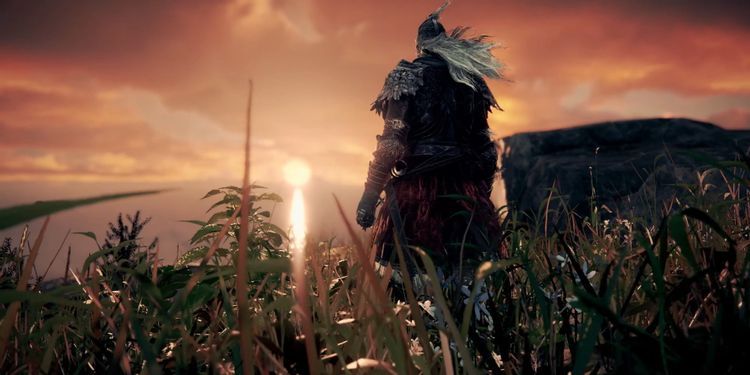