Elden Ring has no shortage of notoriously creepy bosses that knows where to hit where it hurts hardest. The Erdtree Burial Watchdog is one of them and is found very early in the game. You would think you won't see another one again after defeating the first in Stormfoot Catacombs, unfortunately, Elden Ring has a tendency to repeat or even double its bosses in later encounters.

Dealing with one Erdtree Burial Watchdog is a challenge, but tackling two is downright difficult. Both are very aggressive and are heavy-hitters, not holding back on their attacks. Whether you're playing as a melee combatant or a sorcerer, there are strategies to defeat the Erdtree Burial Watchdog Duo. So, here is a comprehensive rundown of how to crush the duo. 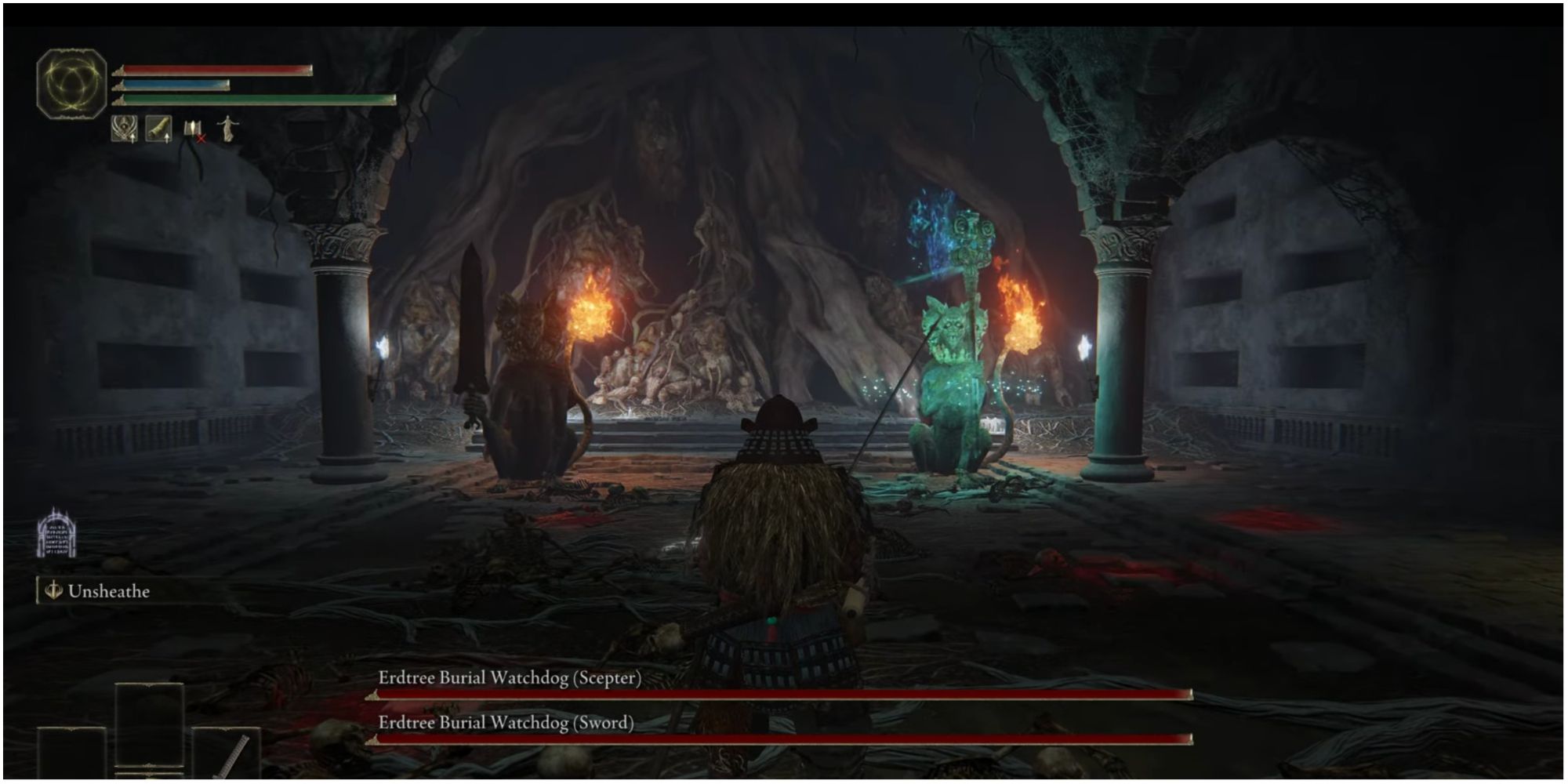 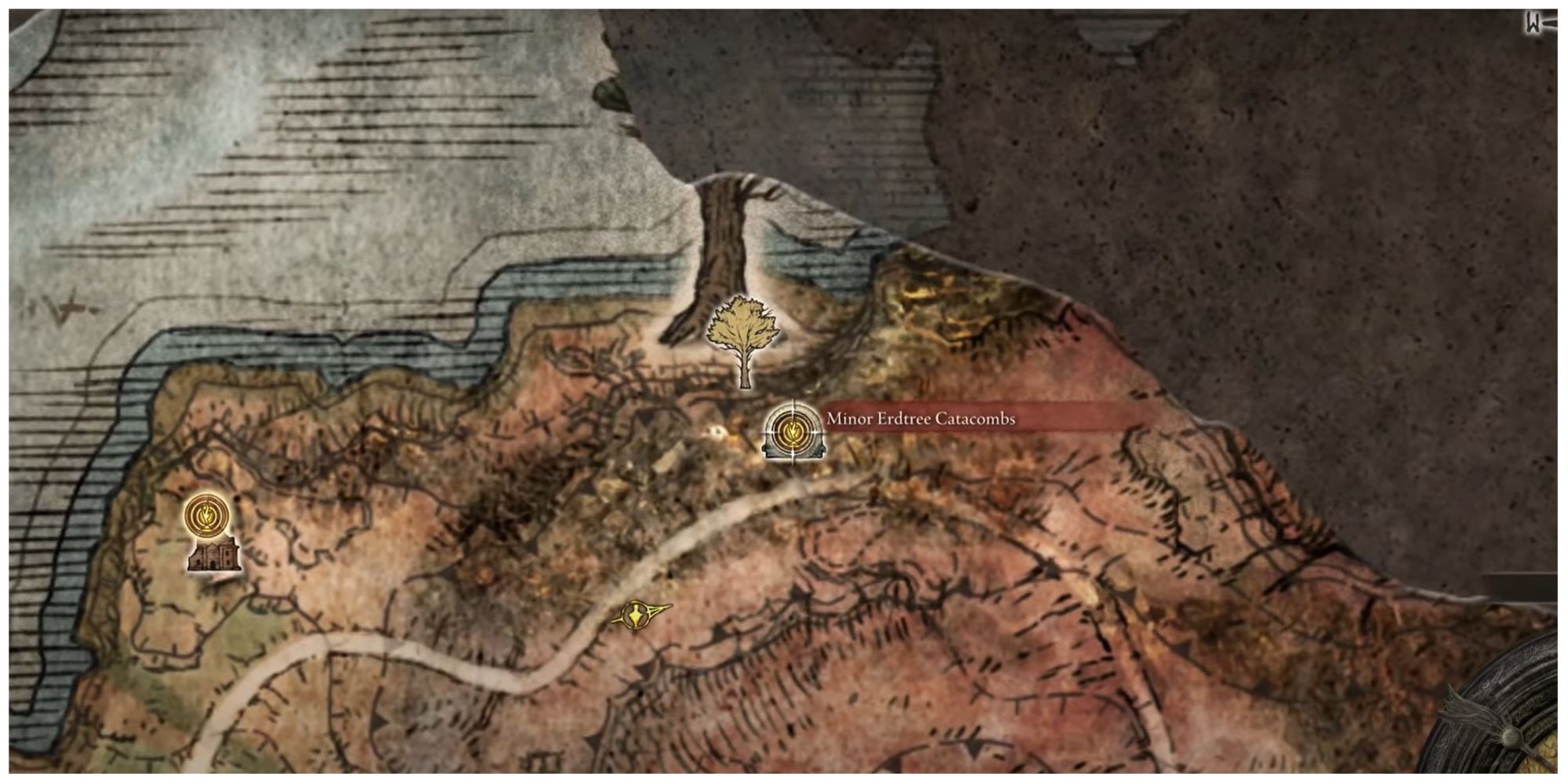 The Erdtree Burial Watchdog Duo boss might be one of the first few bosses you will encounter the moment you first access the region of Caelid. Caelid is known for being one of the most – if not the most- difficult areas in Elden Ring, and it is not surprising that you'll have to fight a duo boss in the first catacomb in the region. These two bosses can be found in the Minor Erdtree Catacombs, with the closest Site of Grace being the Rotview Balcony Site of Grace.

Unfortunately, even gaining access to the catacombs require you to defeat the Erdtree Avatar boss patrolling the area. This is due to the fact that the entrance to the catacombs is directly adjacent to the Minor Erdtree that the Avatar is guarding. Once that is done, enter the Minor Erdtree Catacombs and navigate the underground maze to pull the lever for the boss area.

Each Erdtree Burial Watchdog wields a different weapon. One wields a sword while the other wields a sceptre – so in other words, you're going to have to deal with both a melee and ranged combatant. With duo bosses, keeping tabs on both enemies could be a struggle, so it is definitely recommended to summon a tanky Spirit Ash. You can also have your friends help defeat the Erdtree Burial Watchdog Duo. 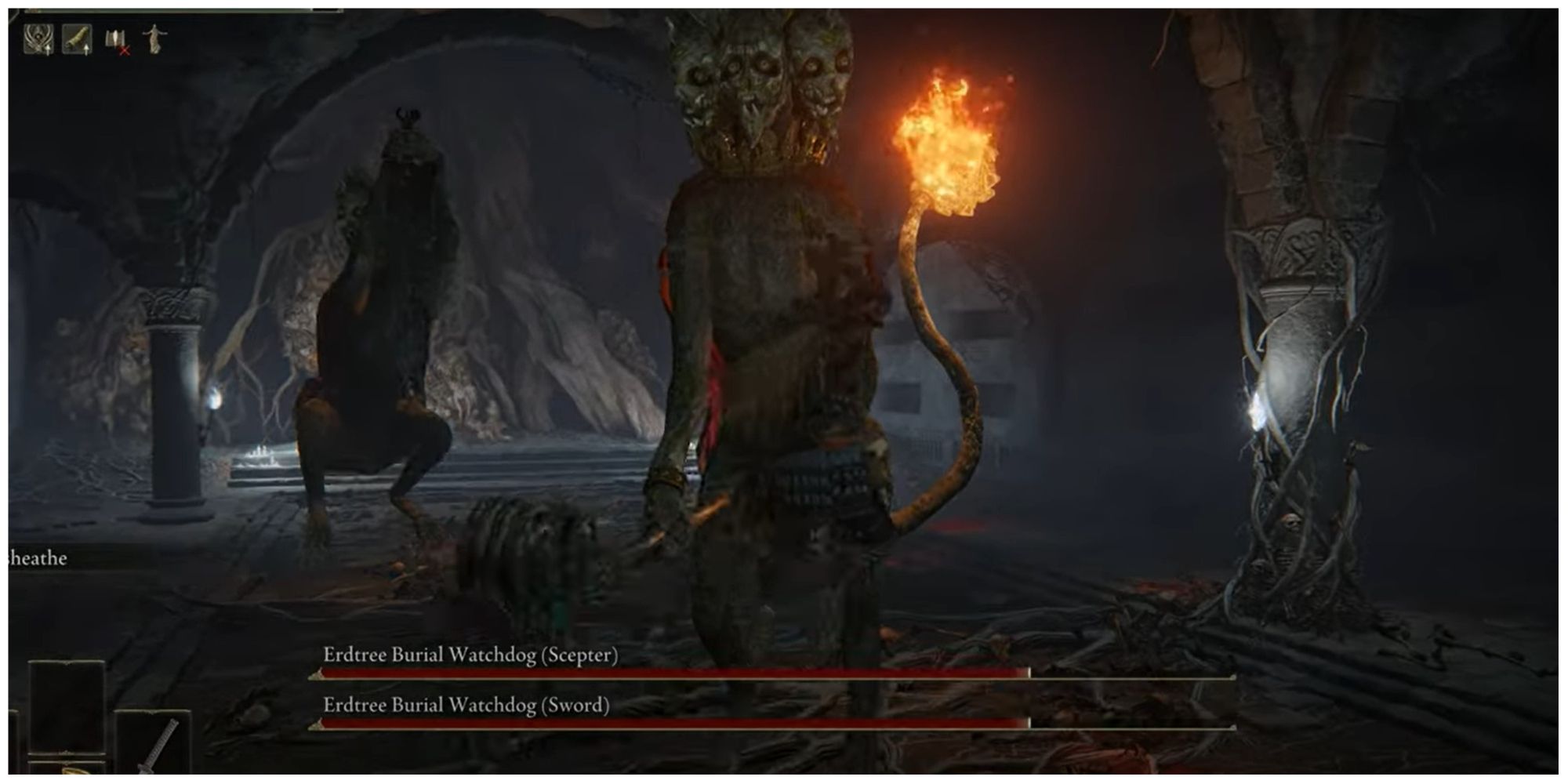 These two bosses are both, unrelenting and aggressive in their attacks. It is important to have backup, as well as stay patient throughout the fight to avoid being killed early. Although they have different move sets and weapons, they do share certain similar combat moves. As such, we have outlined all the attacks of each of these bosses, so that you will be as prepared as possible.

The Erdtree Burial Watchdog (Sword)'s head will shake and unleash fire from its mouth. It will do this while turning a full 360.

Counter: Run as far away as you can. Or stick close to the boss and dodge its fiery breath while as it does a full circle.

The boss's head will turn, its tail will rise, and slam onto the ground in a fiery explosion.

Counter: Simply keep away from the radius of this attack.

The boss will rear back its armed limb and thrust its sword forward.

Counter: Simply dodge roll towards either direction, or move back as far as you can.

The boss will do a brief, yet precise swing of its sword in your direction.

Counter: You can use your shield (if you're a melee build) to protect yourself from this attack. If not, back away or dodge roll.

The boss will float up into the air with its sword clasped before its body and slam down to the ground.

Counter: Run as far away as you can from this attack.

The boss will slam the tip of its sword to the ground, before doing a fast 360 spin.

Counter: Keep away from the radius of this attack.

The boss will rise slowly to its feet and walk toward you, before slamming its sword down.

Counter: Maintain a sizable distance from the boss as it approaches. You can also stay close and time your dodge. As soon as you see the boss's sword about to come down, dodge.

In contrast to its standing sword slam attack, the boss will sit on its haunches and perform a sword slam.

Counter: Back away from the attack or dodge roll.

This boss will raise its sceptre and unleash a barrage of magic projectiles toward you.

Counter: Simply run in the opposite direction to evade them.

Unlike the sword-wielding Erdtree Burial Watchdog, this boss will unleash a magic burst when it floats and slams to the ground.

Counter: Roll/run away from the attack.

This boss will bash its sceptre on the ground multiple times.

Counter: Again, roll/run away from the vicinity of the attack. 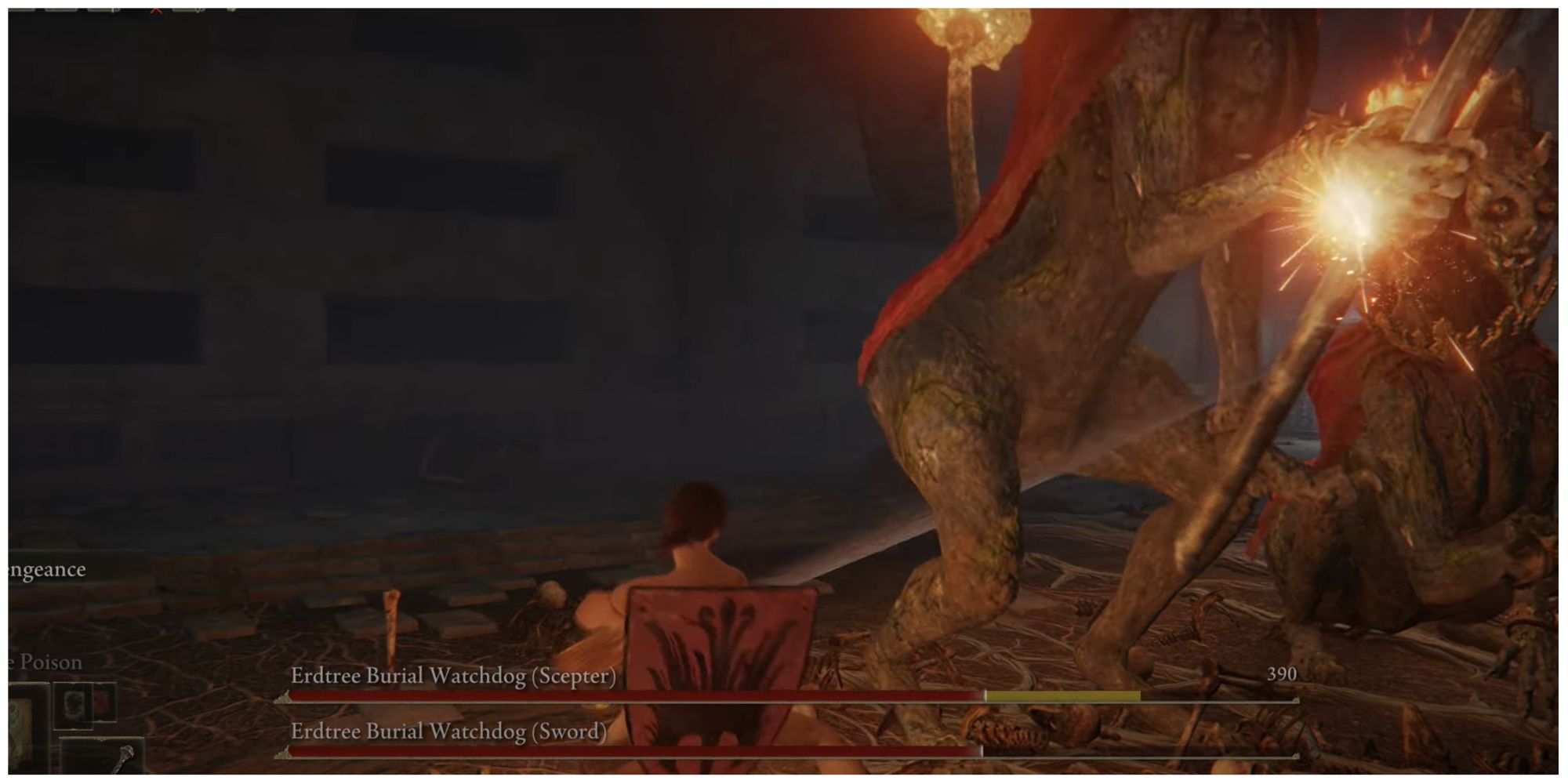 There are two different battle strategies available to you during this dual boss fight. Although these two types of strategies contain their own risks, melee combatants are more at a disadvantage here due to the need to get close to either of these two. But there are certain weapons in the lowly Tarnished's arsenal that could help, from Spirit Ashes to Ashes of War.

It is recommended to equip Opaline Bubbletear in your Flask of Wondrous Physick for extra defense, just in case you can't roll away in time. 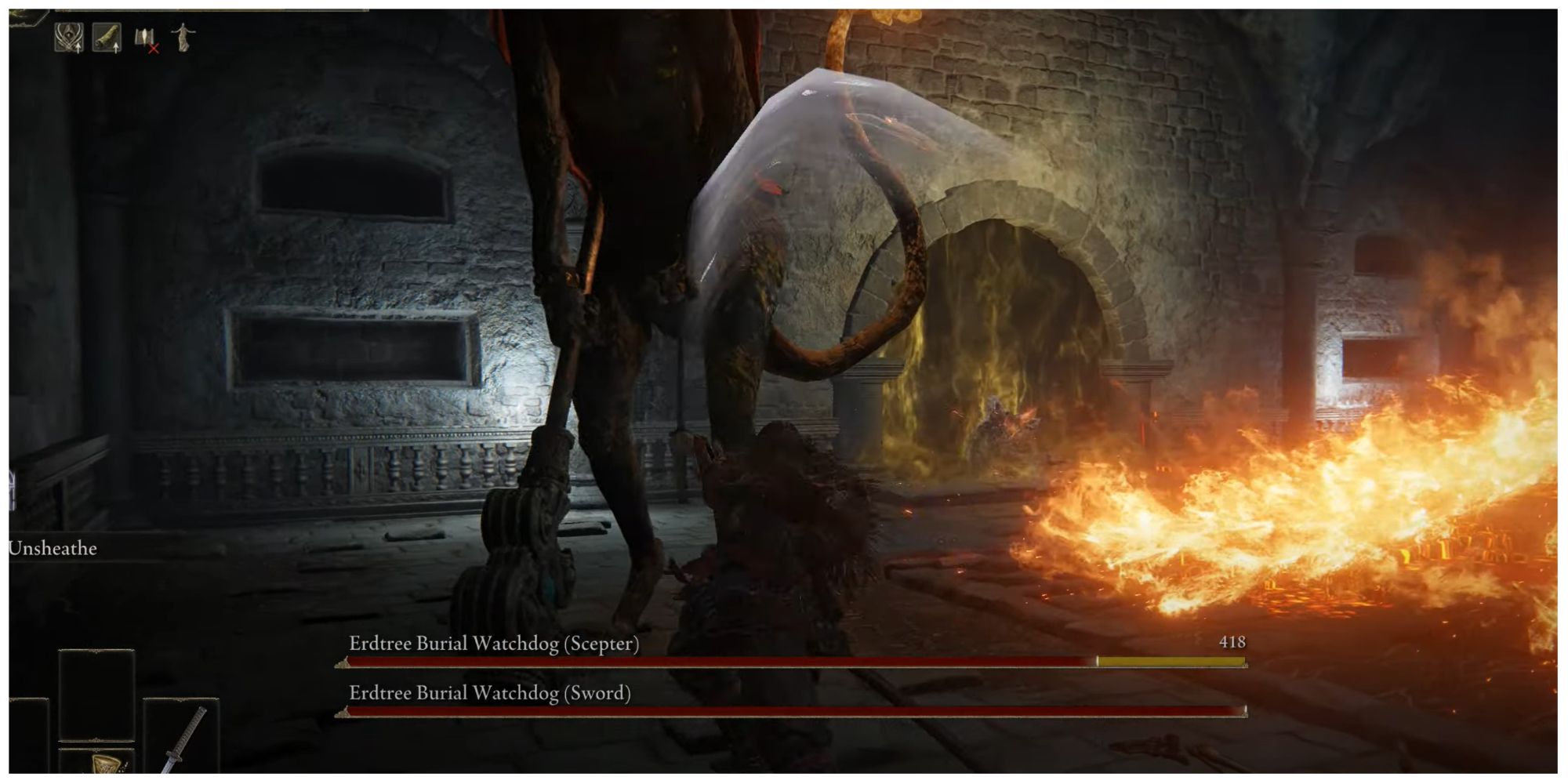 Since the Erdtree Burial Watchdog Duo are made out of stone and not flesh, this makes them immune to Bleed or Poison damage. However, they are certainly not immune to physical attacks, and this is where melee combatants are at an advantage. Arming yourself with a heavy weapon such as the Grafted Blade Greatsword or Bloodhound's Fang will work well against these two. But if you have a preferred melee weapon of your choice that is not considered a heavy weapon, it is totally fine to use, as long as it is upgraded to a +5 and above.

It is recommended to defeat the Erdtree Burial Watchdog (Sceptre) first. This is because their long-range attacks are super annoying when you're trying to mete out attacks to the sword-wielding boss. As said prior, you should consider using a tanky Spirit Ash summon to help keep the attention off of you. We suggest using Spirit Ashes like Mad Pumpkin Head or Lhutel the Headless (+5 and above).

When it comes to which Ashes of War to use, Bloodhound's Fang's special skill of Bloodhound's Finesse does the job very well. Bloodhound's Step is also a good option for evasive maneuvers, as well as Prayerful Strike for extra damage. 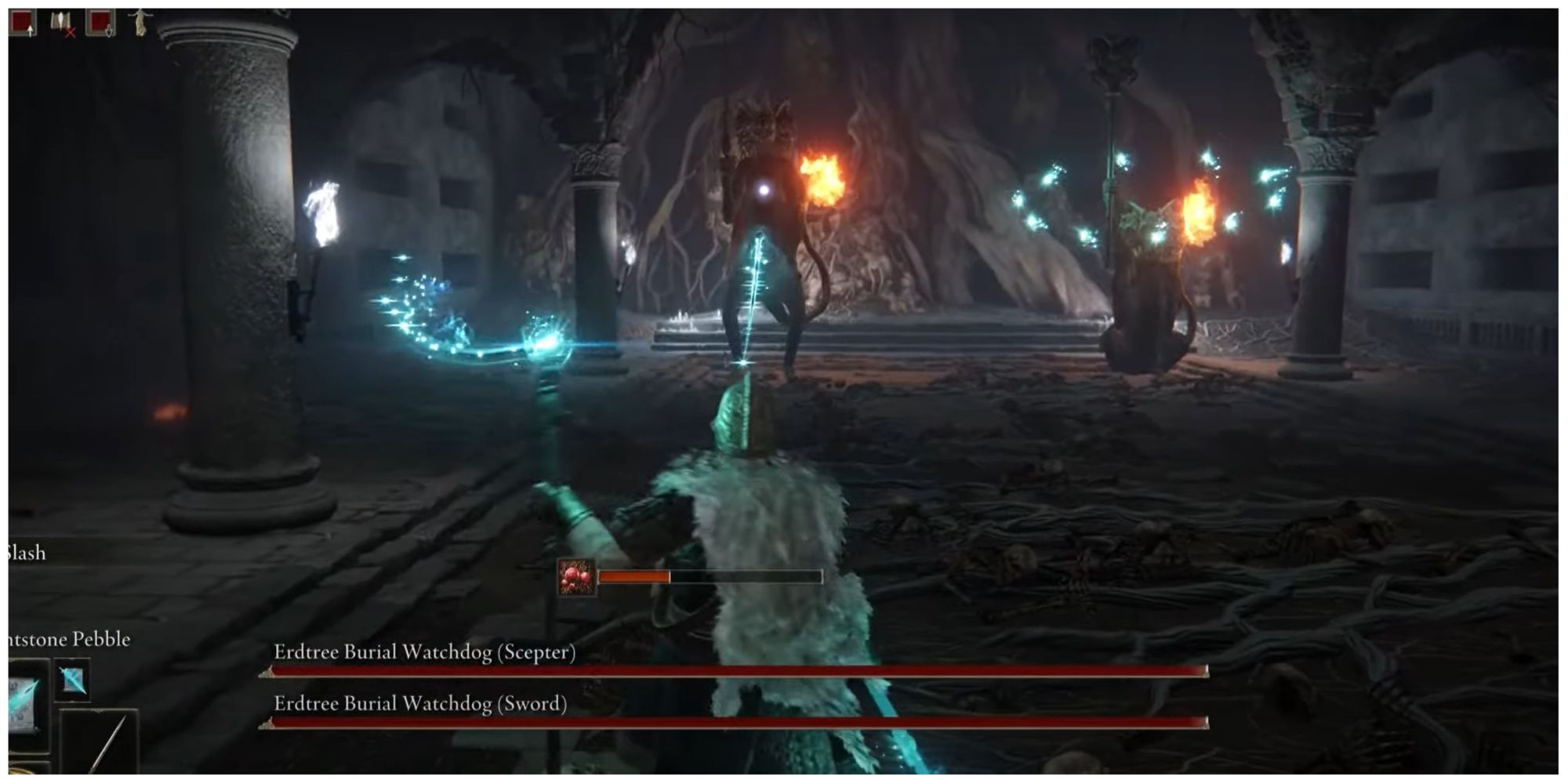 Just as for melee combatants, ranged fighters should also defeat the sceptre-wielding boss first. Using spells that deal tons of physical damage is definitely the way to go, along with a tanky Spirit Ash summons as recommended above. It is best to use spells such as Great Glintstone Shard, Shard Spiral, Rock Sling and Comet to deal as much physical damage as possible. You should also consider using the Cannon of Haima against these bosses as well.