While DNF Duel might be (or at least feel) much simpler than your regular Guilty Gear or Tekken, that doesn’t mean it lacks an interesting number of combat mechanics and systems that make the game complex and fun to play.

From the different types of damage and the use of your MP bar to the Conversion feature and other defensive options, we’ll go over all of these systems and explain them to you. Learning these will help you become a great fighter and use your favorite characters to their fullest potential. 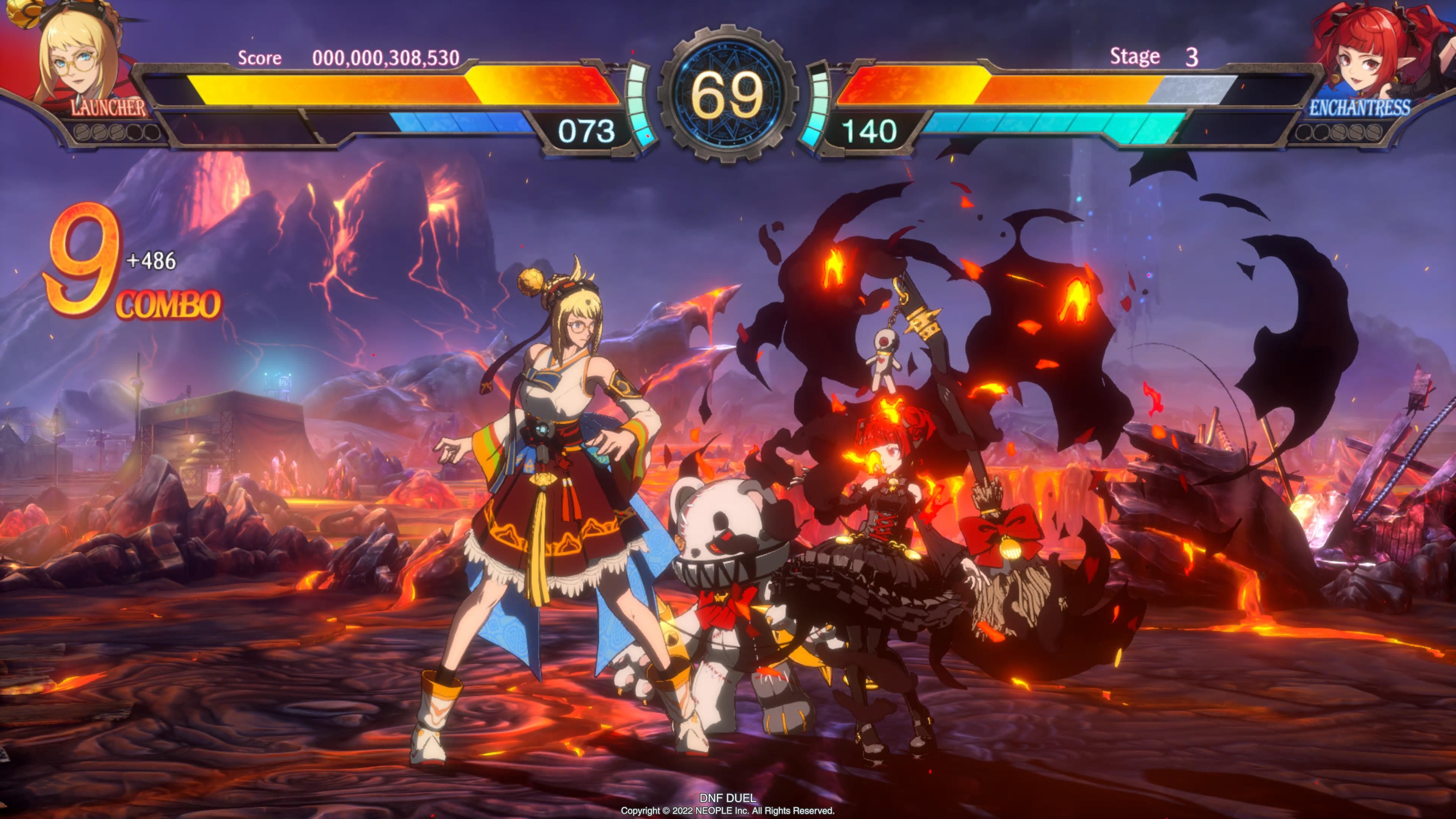 The first thing you’ll notice when having a battle for the first time is that your health gauge doesn’t work in the usual way. Apart from receiving red marks, it can also receive chunks of white/grey rectangles. This is because DNF Duel presents a combat system with two types of damage: Red Damage and White Damage.

Red Damage is the one we are all familiar with: the type of damage that your character or the enemy lose and can’t recover — apart from fighters that have life steal or some ability like that, of course. However, it’s possible that you’ll see White Damage more often than the red one. This has to do with the fact that Red Damage is only achieved by using MP Skills and Awakening Skills (more info on them later in this guide), while White Damage can be produced by using all your other resources: Standard Attacks, Grabs, and Skills.

There are exceptions to this rule depending on the characters and if they are in their awakened state or not, but this is how it generally works for everybody.

White Damage count as real damage, but there are two main unique characteristics about it: it can heal after a while if you don’t receive Red Damage for a few seconds, and it can be used for Conversion, which we’ll explain next. But before that, it’s important that you understand that a match of DNF Duel basically consists of you building White Damage and then converting it to Red Damage. How you do this, however, will strongly depend on your character and playstyle.

It’s worth mentioning that MP Skills can also deal White Damage — this happens when you block an MP Skill. However, you can’t be defeated by just White Damage when blocking, so your enemy will still have to get a hit. 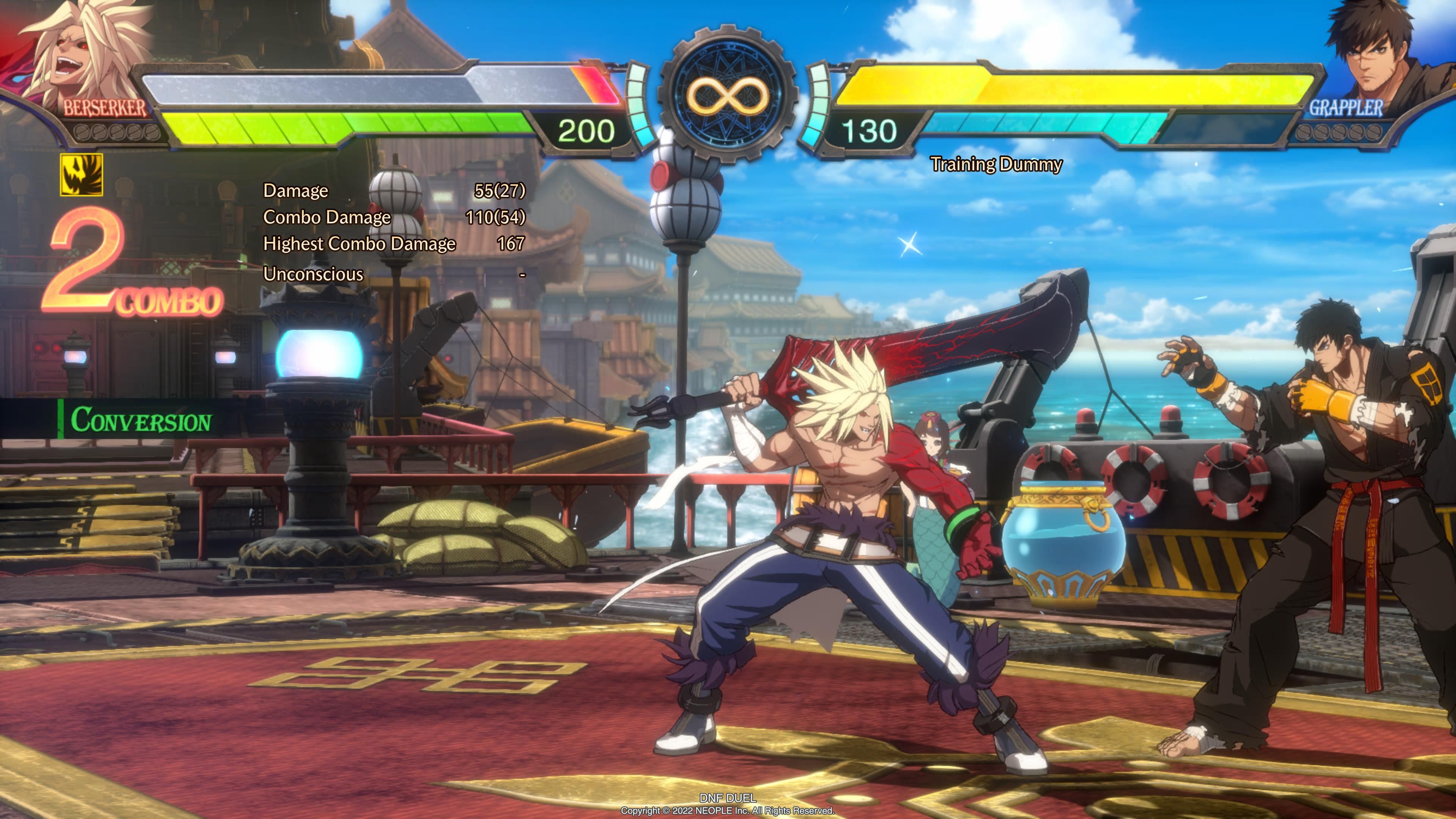 Conversion is one of the main features of DNF Duel. If you play Guilty Gear, it’s kind of a Red Roman Cancel, but it costs health instead of your ability gauge. For newcomers, Conversion is a move that lets you cancel most of your attacks (grabs, Awakening Skills, and some MP skills don’t count) and gain some MP by spending your current White Damage bar.

In other words, you can gain more meter for your special moves and (probably) stop your current move by sacrificing life. This is a risk and reward mechanic that you might not start using right away, but you’ll try to learn more about it once you get the hang of the game. The ability to restore MP when you need it is great, and being able to cancel most of your actions allows you to expand combos or correct your attack if you missed or are about to get hit.

Conversion can be performed by every character in DNF Duel, and you only need to press Standard Attack B + Skill Attack (or the single-button assigned) when you have White Damage.

Don’t be greedy and always keep an eye on your health gauge — you can throw the round by using this ability too many times in a row. 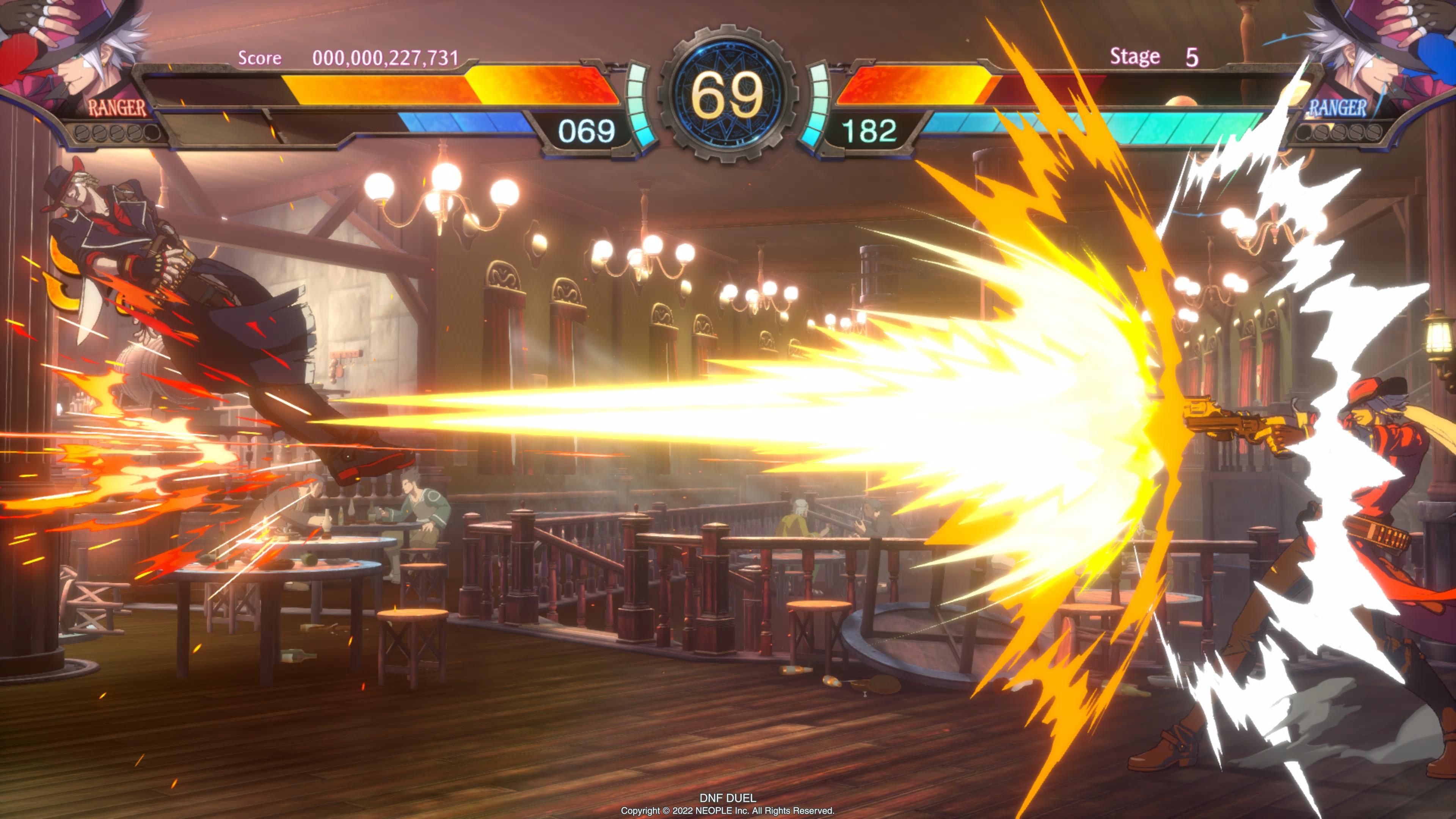 MP Gauge is your regular “super bar” of other fighting games. This gauge will let you perform MP Skills, the most powerful moves of your character performed by a single button and a direction (except for the neutral MP Skill). You’ll always see it under your HP and a number will always show you how much MP you still have.

Your MP Gauge recovers automatically with time. While its recovery is already fast, you can make it faster by performing your MP Skills with the complete motion input. For example, your right MP Skill can usually be performed by pressing Right + MP Skill Attack (the simple way) or by doing a quarter circle to the right (how you do a hadouken, basically) and pressing the MP button. The latter will restore your MP faster.

What’s interesting about the MP Gauge is that you can exploit it. If an MP Skill needs 50 MP but you have 20, you can still use it. The bar will be depleted and you’ll enter an “Exhaustion” state. In this state, you’ll have to wait for more time than usual for your MP to recover (whether you’re using simplified or harder motion inputs). In other words, you’ll lose your special tools for some seconds, so you should make sure that the trade-off is a positive one for you. 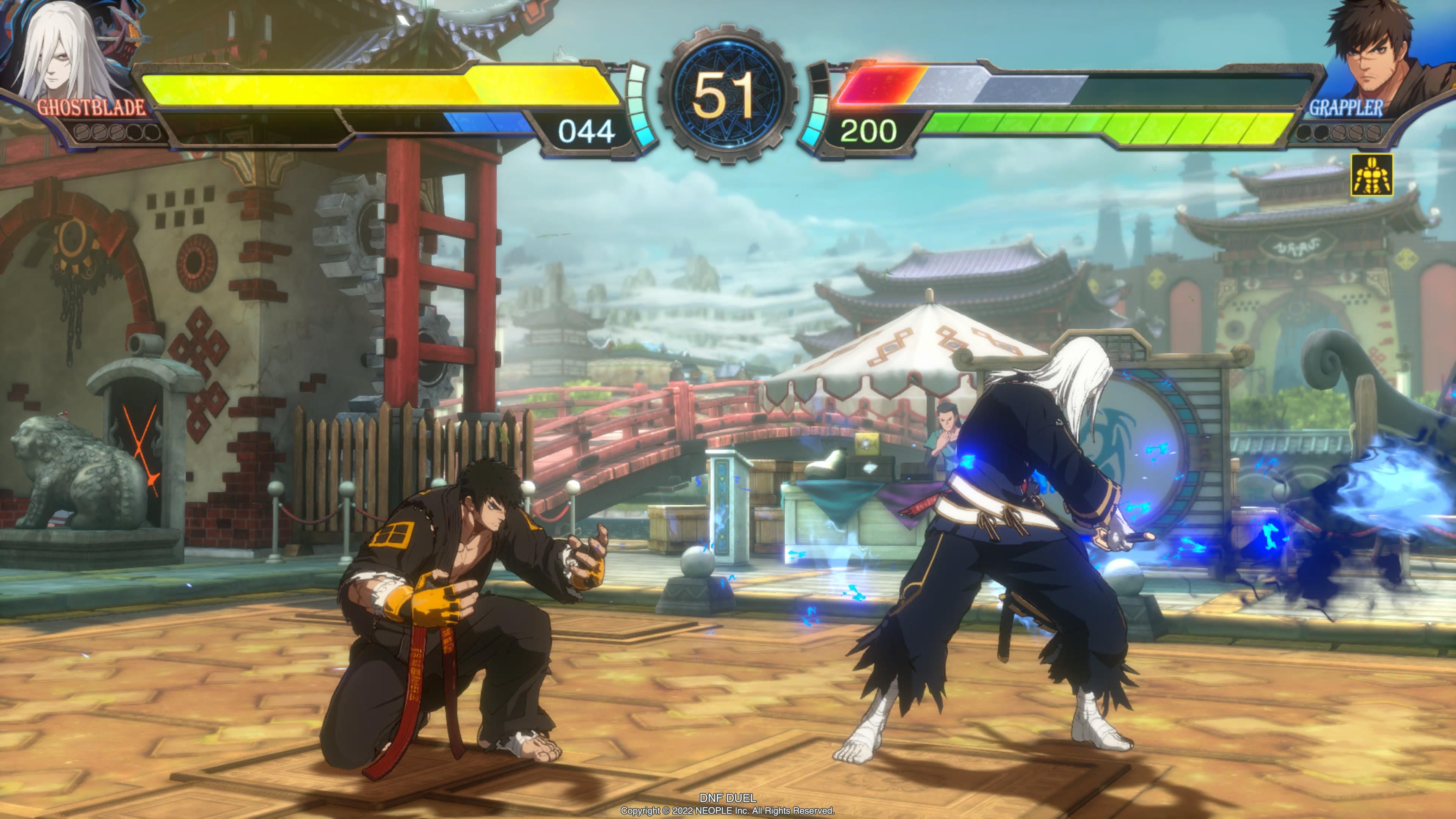 Blocking is your main defensive tool in this game — unless you’re the type of player that believes that a good offense is the best defense, which can also apply here. You can protect yourself from almost any attack by blocking while standing or crouching (and pressing the direction opposite to the opponent, of course). Only grabs can ignore your guard.

You can correctly block all the attacks you receive as long as you have some meter in your Guard Gauge. This is the half-moon bar that you can see on the right of your HP and MP gauges and on the left of the timer. When your Guard Gauge becomes empty, a single attack from your opponent will put you in a vulnerable state, being opened for a hit without the chance to block it.

It’s worth noting that your Guard Gauge actually resists a lot of attacks, whether they are basic attacks or MP Skills, so you can use it for a long time. 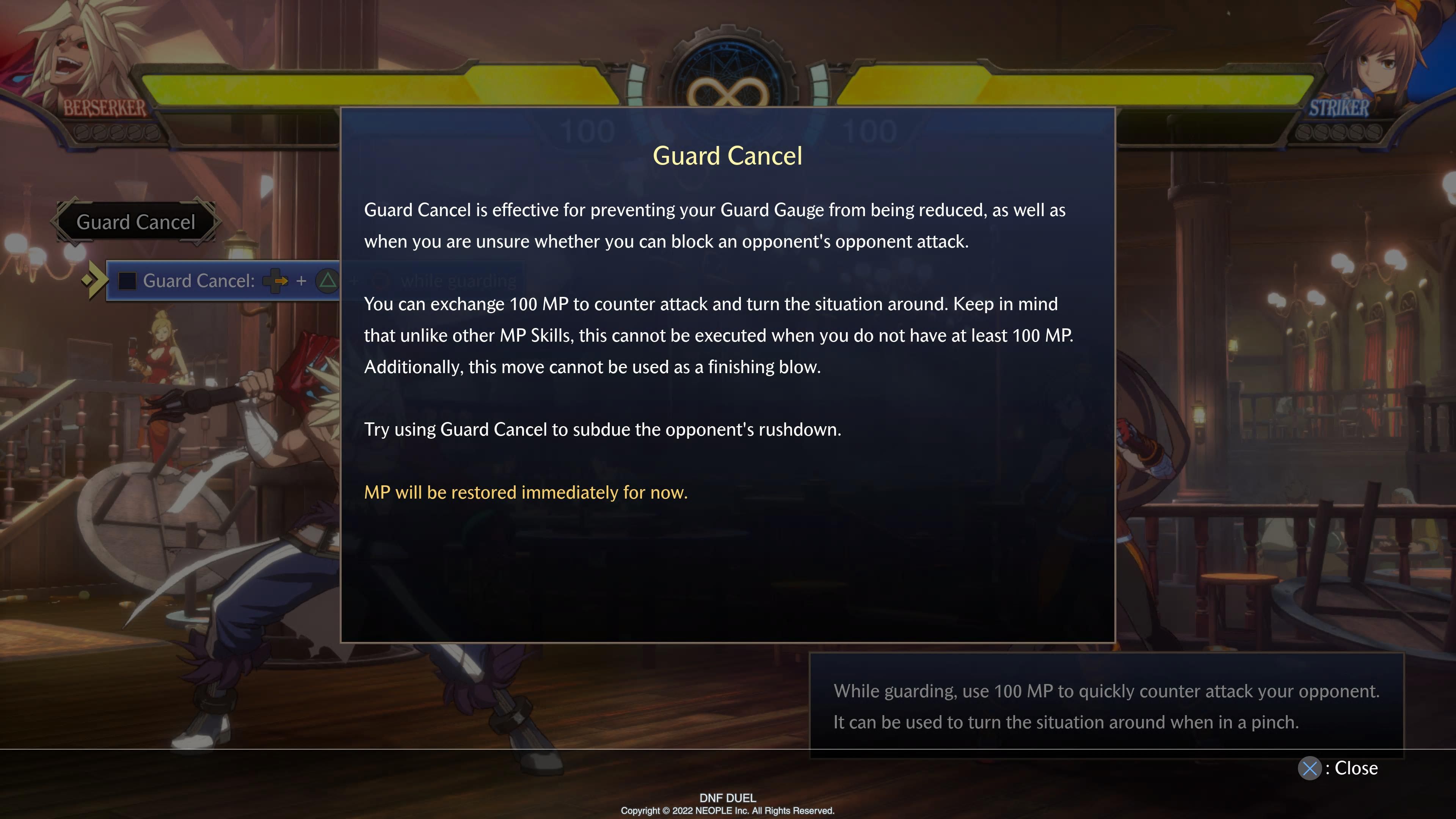 Guard Cancel, on the other hand, is basically a breaker that will eject your rival and deal damage to them while blocking their attacks. It’s a great tool for when you’re receiving too much pressure and you need space to recover. However, it’s a pretty expensive move: it costs 100 MP. Use it wisely.

You can’t use Guard Cancel if you don’t have the right amount (or more) of MP.

You can also perform a roll/dodge in DNF Duel. It’s assigned to one button per default and it lets you move to the other side of your enemy in a quick move if you’re close enough. A great tool for aggressive playstyles. 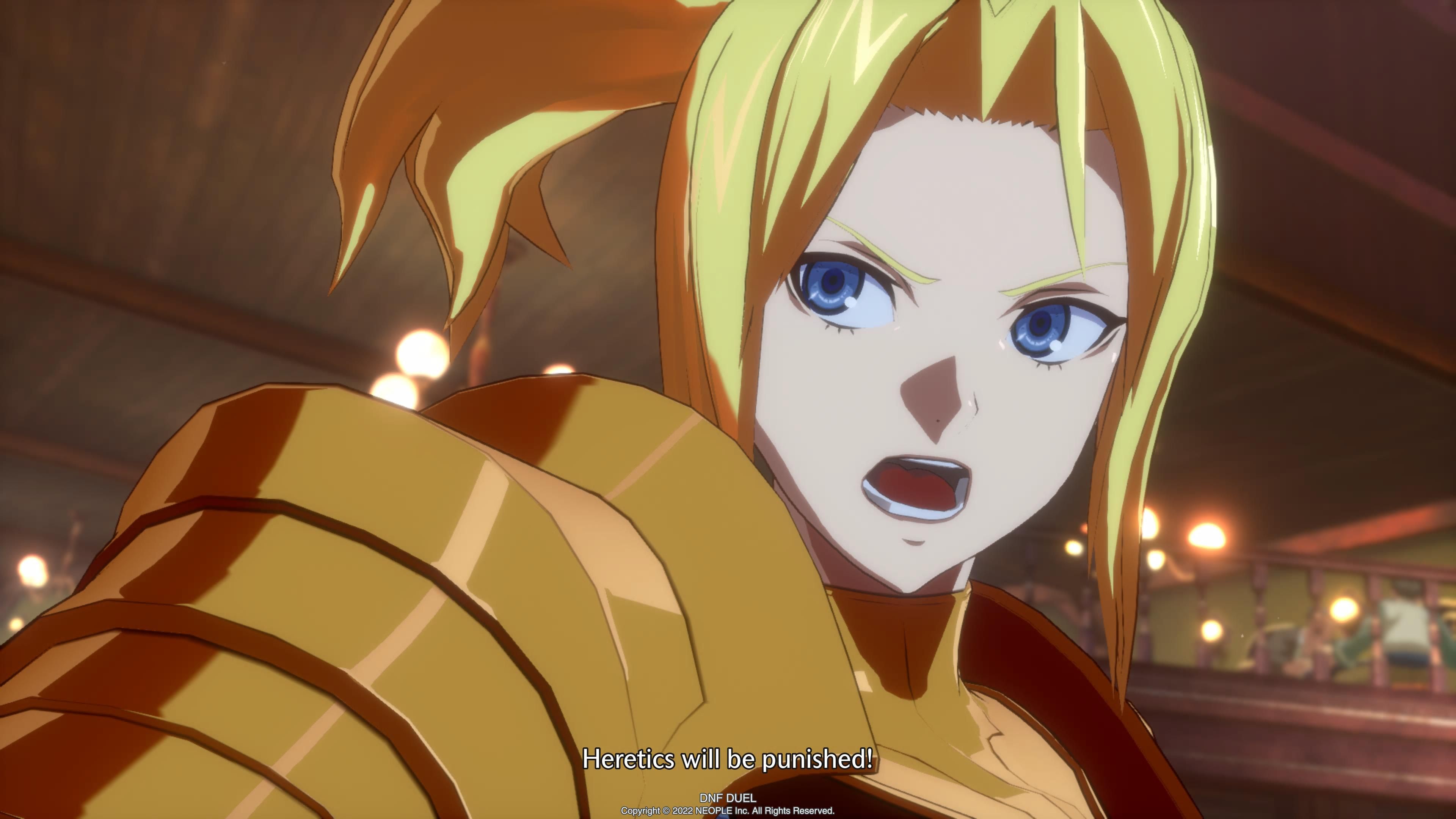 Lastly, the last couple of systems we’ll see here are Awakening Effects and Awakening Skill. Both of them become available when your character has 30 percent HP or less.

The Awakening Effects are passive buffs that you’ll receive just by reaching this level in your health gauge, and they are different for every character. For example, Berserker gains the ability to heal depending on the damage you deal to your rival. Other fighters get more strength, armor, and other useful effects.

On the other hand, Awakening Skill is your ultimate move. When connected, it performs a cinematic attack that takes a good amount of your enemy’s HP gauge. However, beware that you can’t activate this move more than once during a round, so always try to use it as a finisher of a combo.