Nostalgia and magic pave the open world landscapes of Disney Dreamlight Valley, an adventure for children of all ages – young or old. As the recently returned ruler of this once-great land, you must collect Dreamlight to perform spells, banish The Forgetting, and bring your famous friends back home.

Whilst some characters can be found milling about the Plaza from day one, you'll need to harness your magical potential to seek out and set free others who may be trapped elsewhere. Here is how to rescue Elsa and her sister Anna from the Frozen Realm!

Disney Dreamlight Valley is currently in early access, so information in this piece is subject to change as the game developers release more content.

How To Unlock Elsa 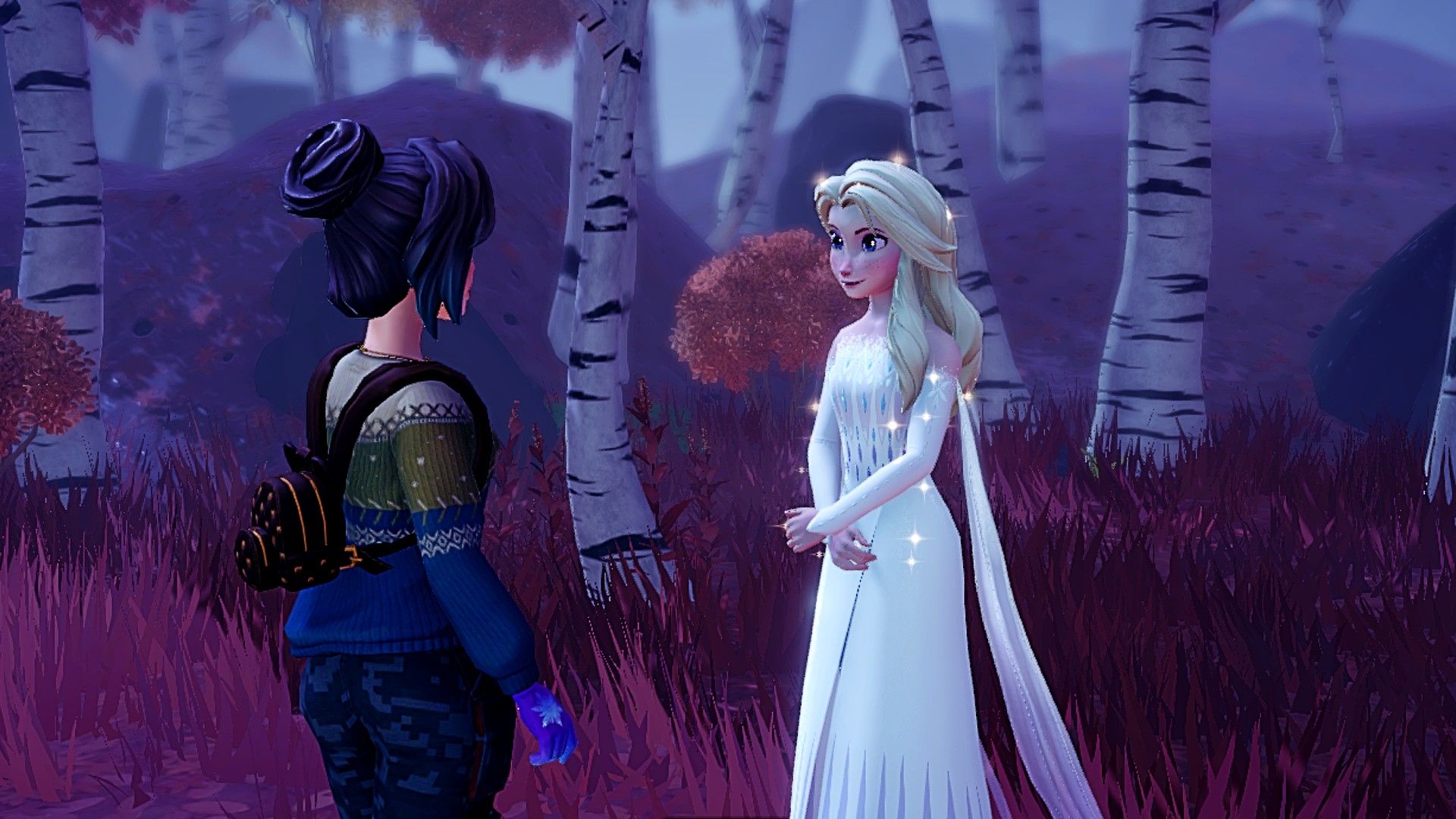 To get Elsa and Anna back in the Valley, you'll have to spend some Dreamlight to unlock the Frozen Realm first. This door is located on the second floor of the Castle, just off from the Plaza.

After gaining access to the Frozen Realm, you will run into Anna. She's frantically trying to oust the many fires started by a renegade Fire Spirit who has gotten lost in the Enchanted Forest, along with her older sister and ice-magic wielder, Elsa.

Even though you can speak with Elsa, you can't start raising your friendship level with her properly until she is safely home in the Valley. To do this, you need to complete Anna's first two friendship quests (The Spirits of Nature and Welcoming Anna) before you can return to the Realm and invite Elsa to join you both. We have separate guides to check out for more detail on these quests if you find yourself stuck.

What Do You Need To Have To Bring Elsa To Dreamlight Valley? 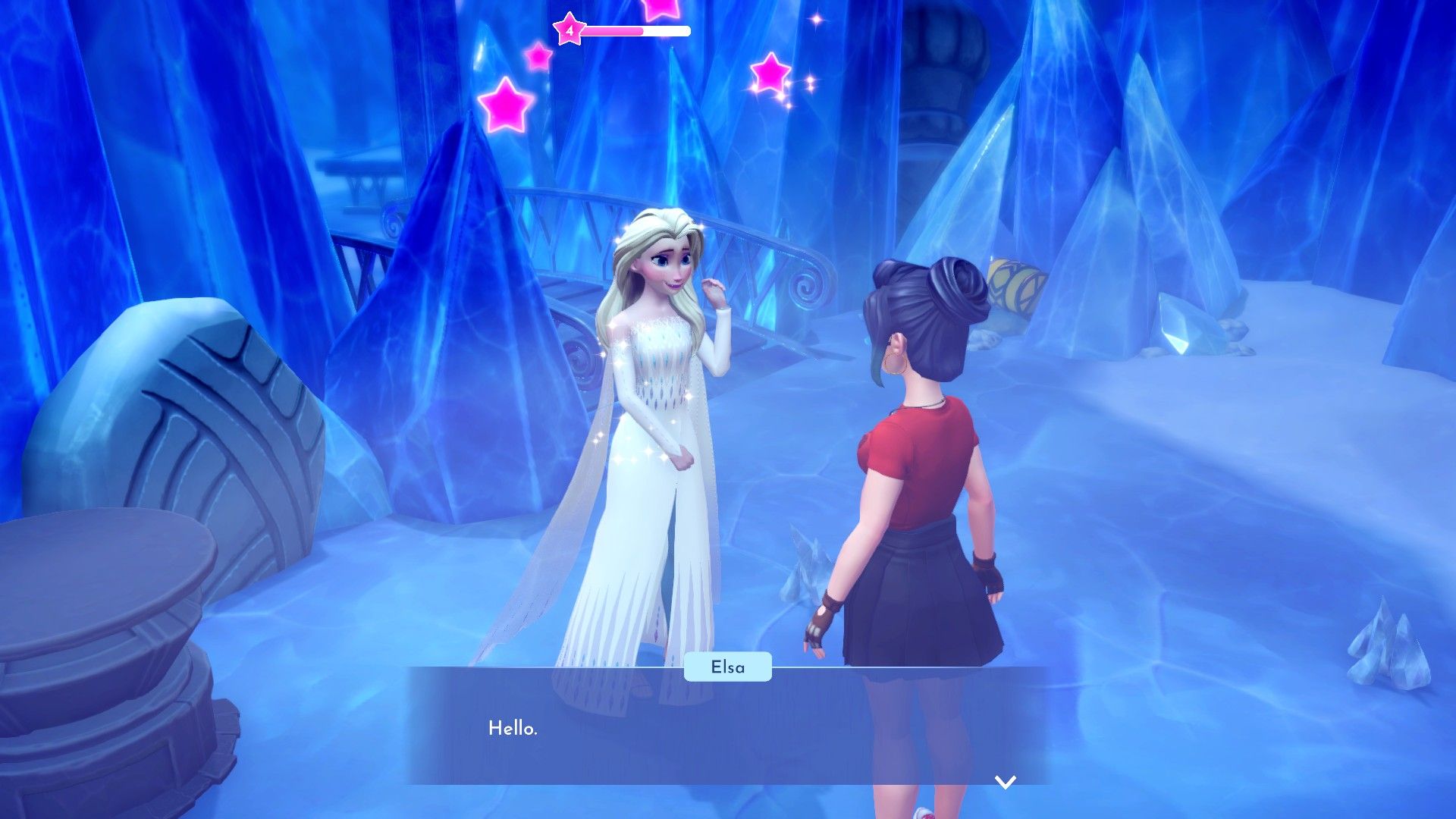 Once you raise your friendship with Anna, she will send you back to the Frozen Realm on the An Icy Invitation friendship quest.

She has found a place for Elsa to live here in Dreamlight Valley, but it's tucked on the other side of the Forest Of Valor. You'll need to upgrade your shovel to clear a path because it's overgrown with toadstool-infested tree stumps that won't budge.

You could save up to 10,000 Dreamlight to unlock Frozen Heights to bypass the woodland blockade. However, you will eventually have to level up that shovel, so it's best to just follow the questline and gather the requisite materials for the upgrade.

To upgrade the shovel, you'll have to bring Anna the following materials:

Next, use your upgraded shovel to dig through the blocked pathway to the other half of the Forest Of Valor. The Ice Cavern can be found tucked in the back, just by the sloping pathway up to Frosted Heights.

Now, take a photo of the Ice Cavern that Anna picked out as Elsa's new home. You'll need to have this in tow when you head back to the Frozen Realm – not forgetting Anna's handwritten invite – to officially ask Elsa to join her little sister in her new (old) home.

Now, Elsa should follow you next time you return to the Valley! She will have a brief introductory welcome sequence. After this cutscene plays out, you can start leveling up your friendship, hanging out with her, and collecting more Friendship Quests to carry out to progress further into the game.

How To Unlock More Of Elsa's Quests 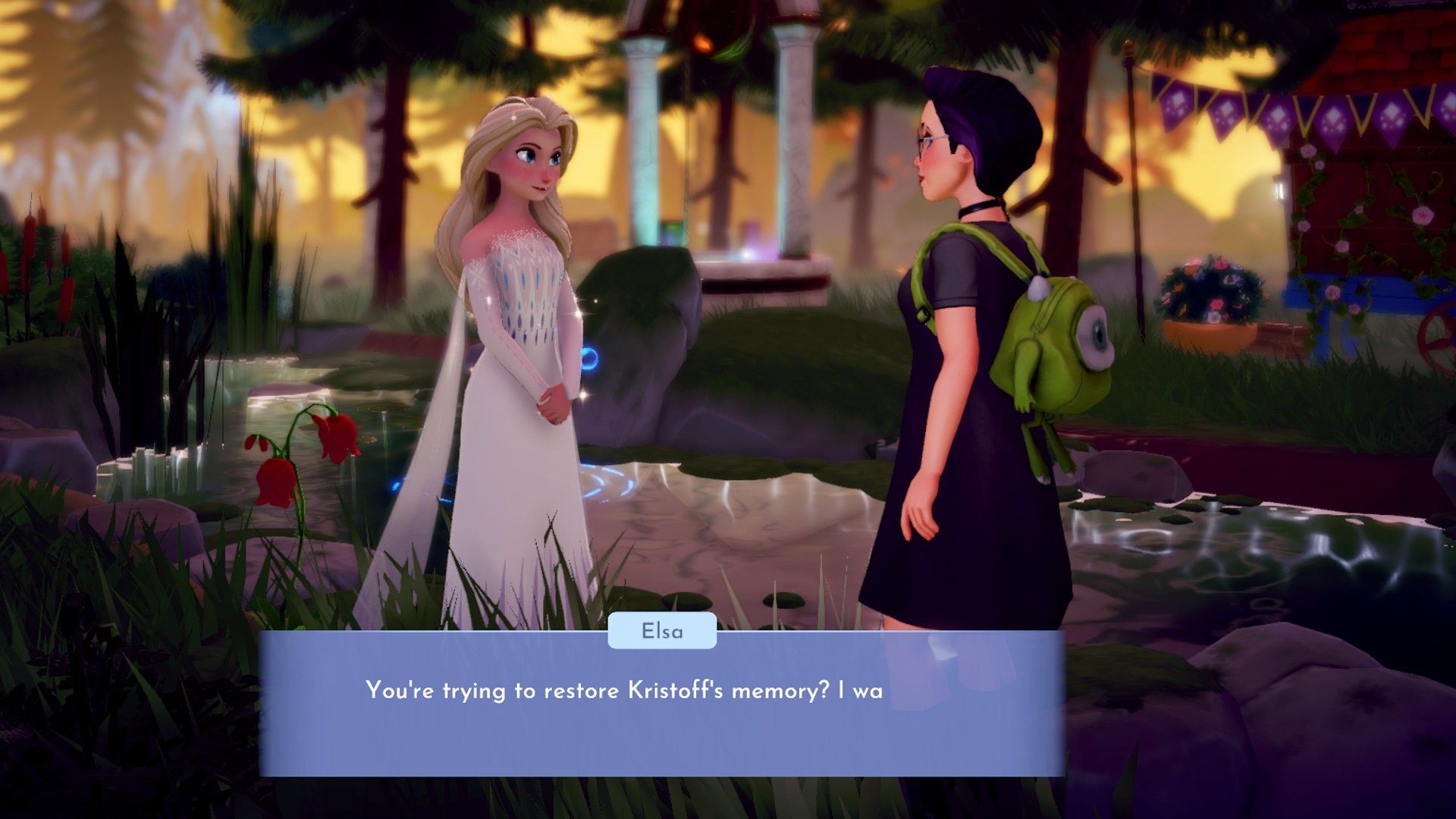 As with all characters in Dreamlight Valley, you need to level up your friendships to progress through their quests. Some quests are intrinsically tied into others, so be sure to not only focus on one character at a time, as you will save yourself a lot of trouble by tending to each character as you go along.

One of the easiest ways to do this is to assign them a role, which earns you extra materials while foraging, fishing, gardening, and mining. Simply ask them to hang out with you and carry out your tasks as usual, and you'll find that you gather twice as many resources and friendship points.

Mining and gardening are considered two of the highest earners of friendship points, so be sure to assign Elsa one of these two tasks to help speed the process along.

You should also make an effort to have your daily discussions with her. Use the Characters tab under the Collection branch of your in-game menu to bring each character their favourite items. These change daily, earning you many more friendship points compared to gifting them other items. 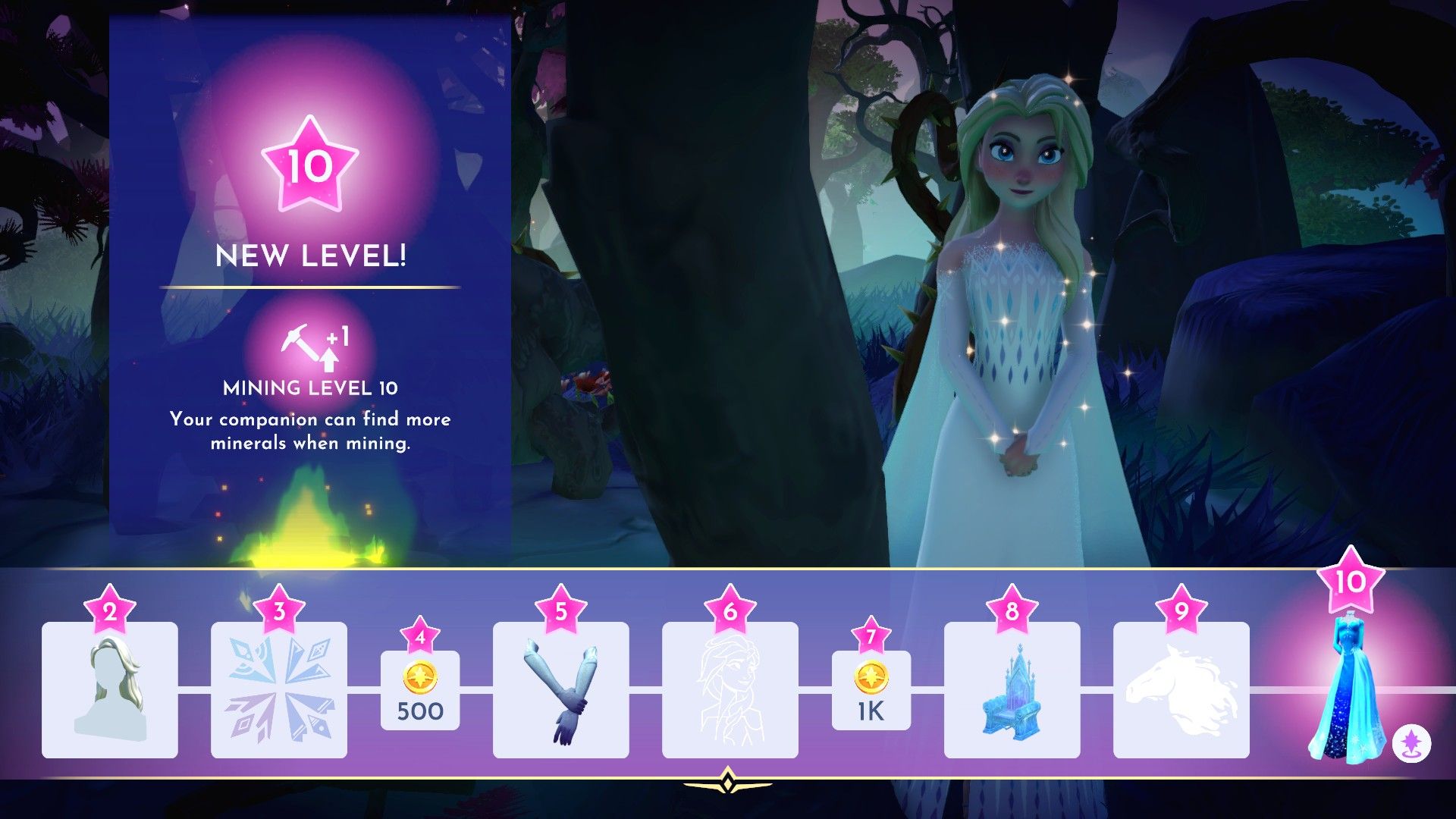 Like everyone else in town, Elsa has ten levels of friendship to work through before you reach coveted best friend status. Most of her quests are tied in with Anna and Kristoff, the film's male protagonist, so be sure to work on all three characters' questlines at the same time to maximise your time spent grinding for points.

For Elsa's final friendship reward, you will have to complete her mission, The Ice Cavern Mystery, to actually obtain it. You'll need to find the final crest for the ice mural in Elsa's cavern, so go to the grandfather clock in Anna and Kristoff's house. 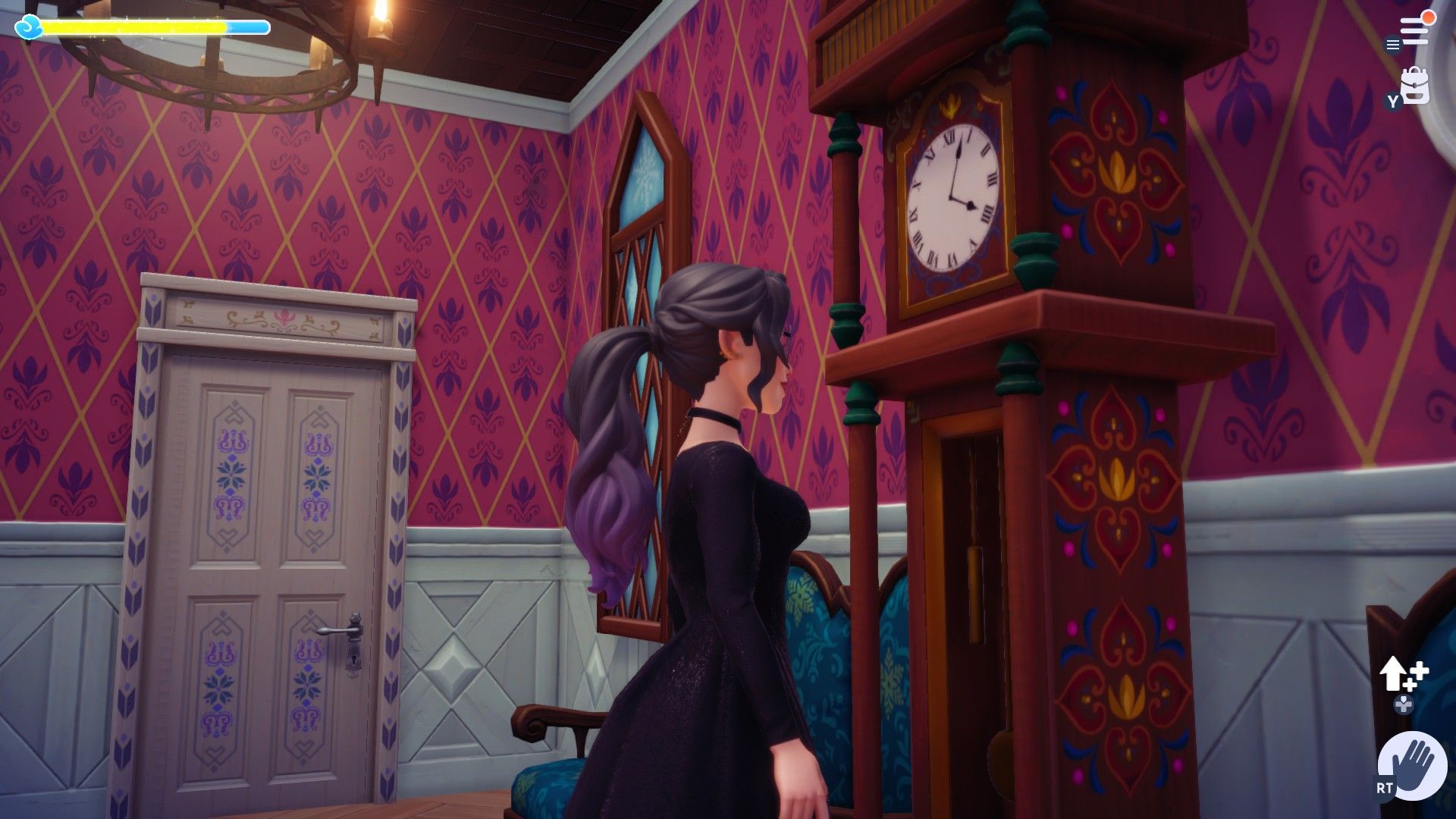 After bringing this back to the cavern to place into the mural, you'll now have to go and gather the rest of the items to unlock the ice chest. Each of these items represents one of the activities you can carry out in Dreamlight Valley:

Place each item on its respective pedestal – you can spot which is which by the logos atop each one – and step back.

Now, the ice chest will unlock itself thanks to the power of Dreamlight magic. Inside is a special gown, one with the first snowflake to ever fall on the Valley stitched into its lining. 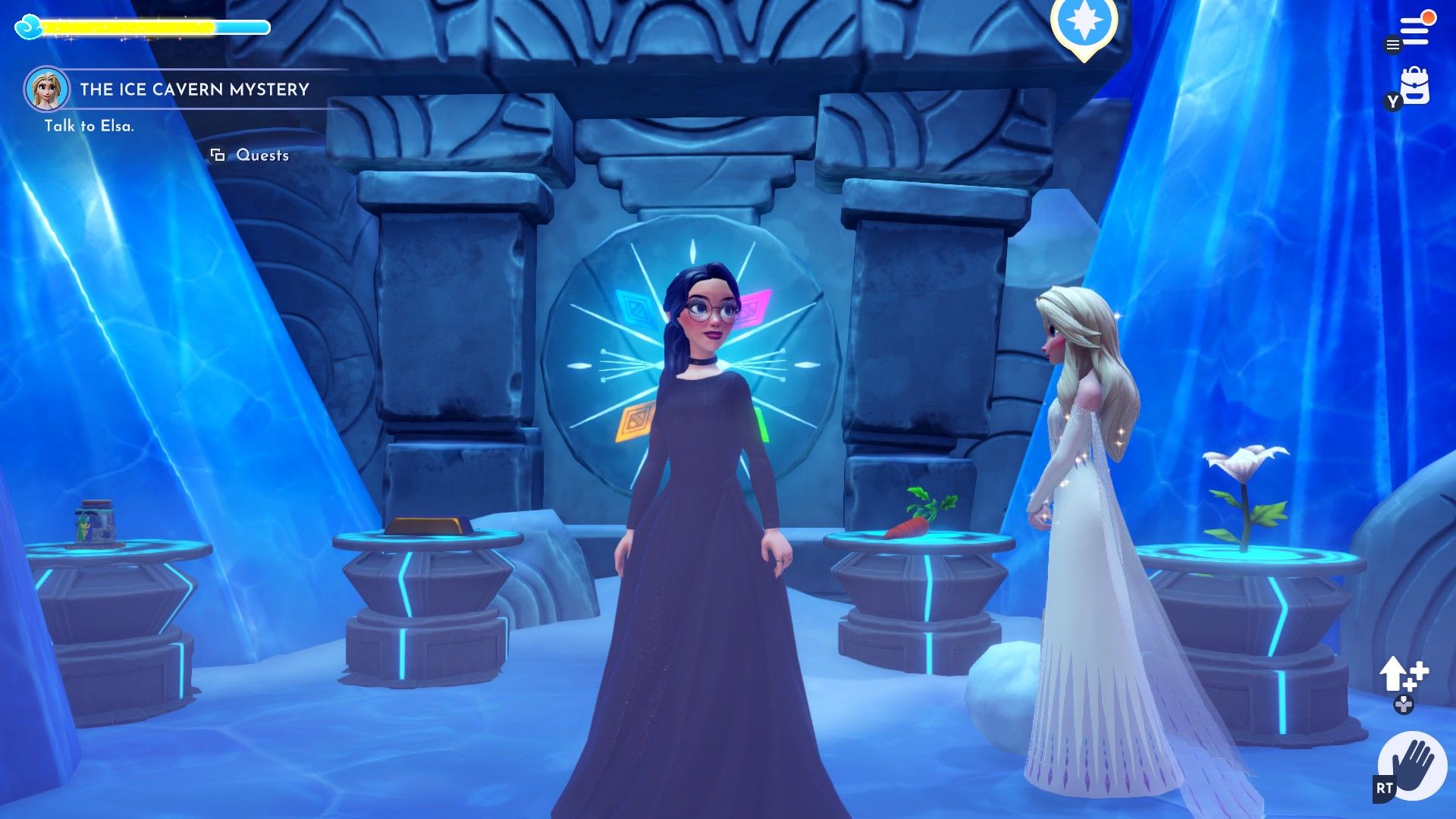 As a reward for your help and friendship, Elsa is more than happy to bestow it upon you as a token of your relationship – and the memories you've helped her recover.