Deliver Us Mars is a survival adventure game that sees you play as Kathy Johanson, an astronaut-in-training sent on a mission to retrieve vital technology from Mars. A standalone sequel to Deliver Us The Moon, it’s set ten years after the Fortuna mission. Earth receives a distress call from Mars and must venture into space to recover the ARK ships and their technology, without which the human race is doomed to extinction.

The game plays similarly to others in this genre, including exploration, survival elements, and puzzles, all wrapped around a narrative that involves uncovering some bizarre and unexpected events in the colony. You’ll need to tread carefully as you explore the desolate planet of Mars, trying to piece together precisely what sparked the distress call. You must unravel the story to discover the location of the ARK colony ships and their technology and return them to Earth.

The hands-on demo I played as part of a Frontier Foundry showcase put me into the story not far from the start, following a slightly different part of the game to the Gamescom Preview. Kathy is alone and beginning to explore the remains of the colony in search of answers. This section of the game allowed me to experience some of the more unique mechanics and start to put together the threads of the story.

Narrative plays a huge role in Deliver Us Mars and this is evident from the start as Kathy’s ulterior motives for taking on this mission become clear. It turns out that her father was among the colonists on Mars and she has a lot of questions about what happened to him and the colony itself. The information is mostly conveyed through holographic recordings scattered around the area and soon reveals few answers and even more questions. 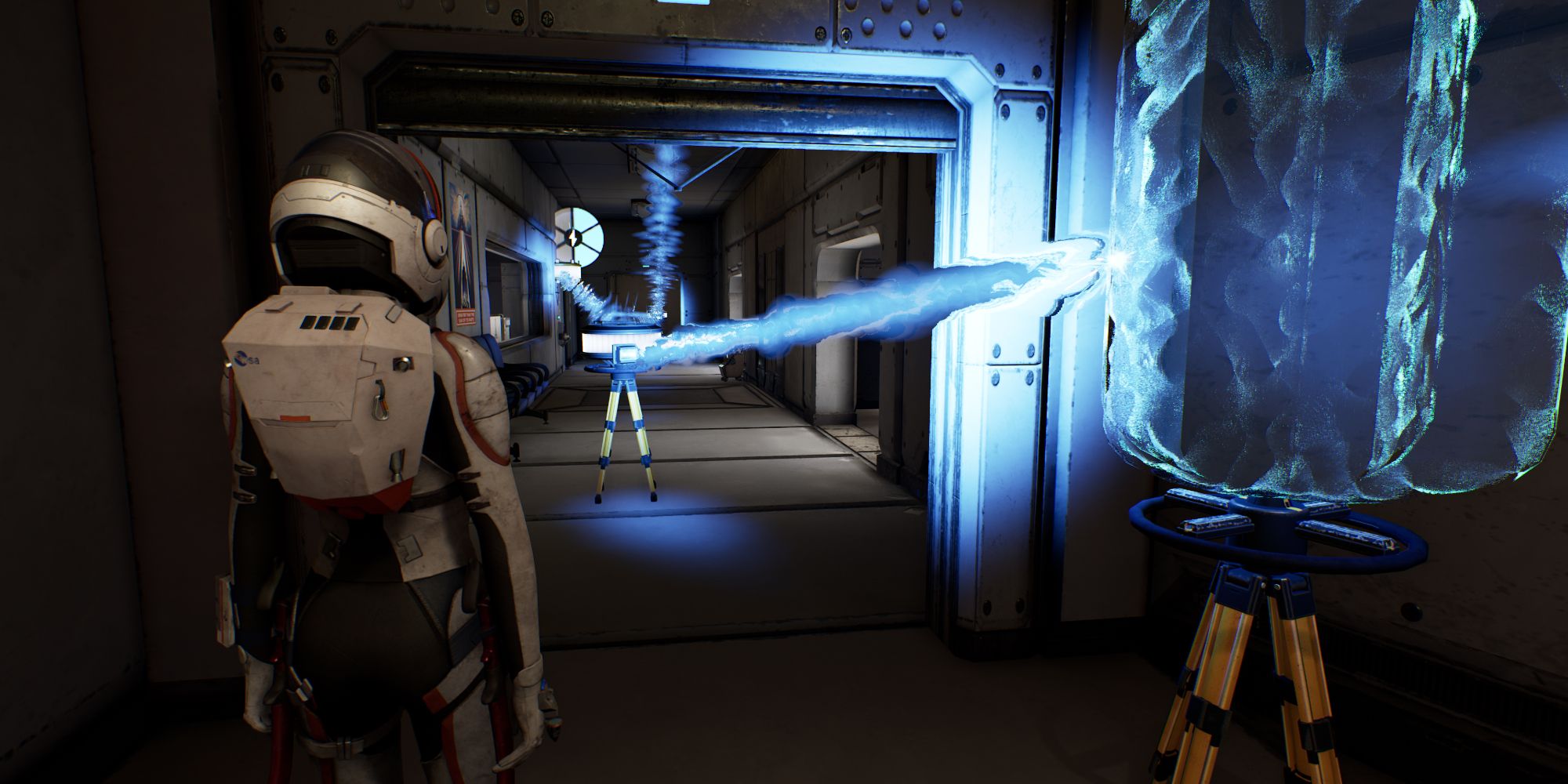 These recordings are like pieces of a puzzle, and you need to put them together and fill in the gaps in order to work out what happened. This way of conveying information feels easier to follow than things like videos hidden on computers due to the way the holograms are displayed as easy to spot icons. They are shown in key locations, and you can’t miss them. This means you aren’t wondering if you missed some vital information in an email three rooms back that would have helped you now.

As you explore, there are several mechanics to make the process feel more hands-on and realistic. You’ll need to crouch, climb, and jump, as well as scale various walls using pickaxes. As you progress, there are a number of environmental dangers to overcome, and sometimes quick reactions will be needed. You can retry if you fail, which I did, an embarrassing amount, but you’ll need to overcome each hurdle in order to continue.

A lot of the exploration reminded me of climbing through rickety planes and scaling mountains in recent Tomb Raider titles. The familiar feeling of panic is evoked as you clamber across the remains of a ship, hoping the floor holds. You also get the same stomach through the floor moments when it doesn’t and a split-second choice must be made. It’s not too predictable either. While the places you need to climb are obvious, knowing when the floor will and won’t hold still came as a surprise most times. Despite these parallels, Deliver Us Mars has another trick up its sleeve that sets it apart: a drone.

Kathy is accompanied by a drone which is vital to the success of the mission. You can take full control of this robotic sidekick and use it to access vents, press buttons, and move items. In order to solve the puzzles, you’ll need to not only use your own skills, but also those of the drone. 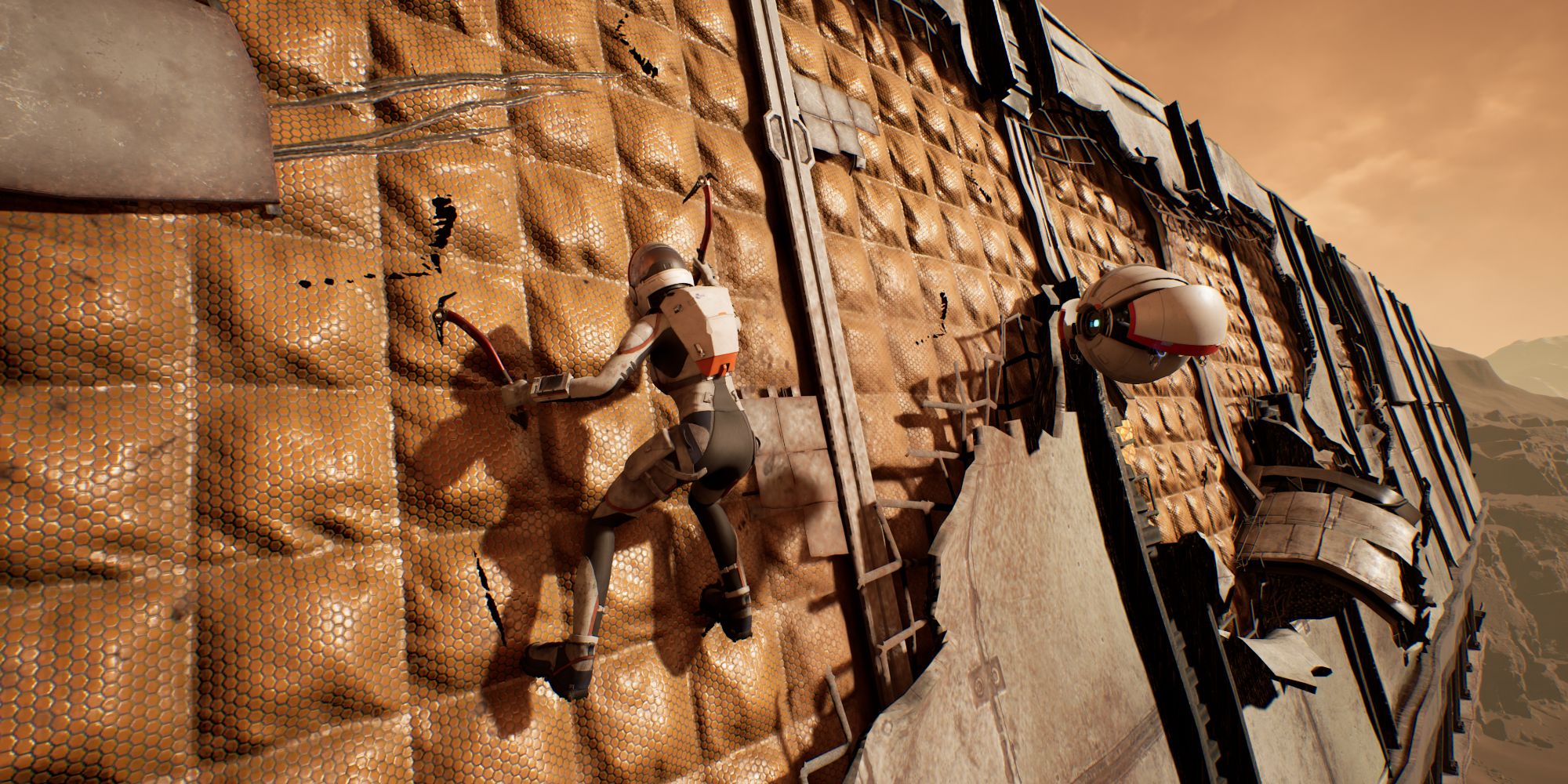 The mission I played showed a promising balance of story, puzzles, and exploring, although there was no combat. So far, it’s unclear if there is a threat we will meet, and what form it may take, but the tension is palpable. The deserted and half-destroyed locations are eerie enough to feel like danger lurks around every corner, even when there’s no evidence to suggest any other lifeforms are still around.

The atmosphere is built effectively, and the music helps create and maintain the tension, as well as heighten the feeling of danger when you need to traverse difficult areas. Despite being very early on in the game, it captured my attention enough that I desperately need to see the resolution to Kathy’s story. The details revealed are sketchy enough that I can’t build a proper picture, but intriguing enough to make me want to.

In terms of difficulty, it felt well-balanced. For someone smarter than me – and with good reflexes – aspects of it may feel too easy, but I found it well pitched. I struggled in a couple of areas but was able to overcome the challenges with a little practice and time. My only real complaint was that a couple of the puzzles were a little difficult due to me struggling to spot the colour differences in some beams that indicated if the power was too low, too high, or just right. However, this is a very minor thing, and I played a beta version, so there’s still a chance for things to change.

Overall, Deliver Us Mars was a positive experience and one that made me look forward to playing more of the game when it releases on February 2, 2023, for PlayStation 4, PlayStation 5, Xbox Series One, Xbox Series X|S, and PC via Steam and Epic Games Store.