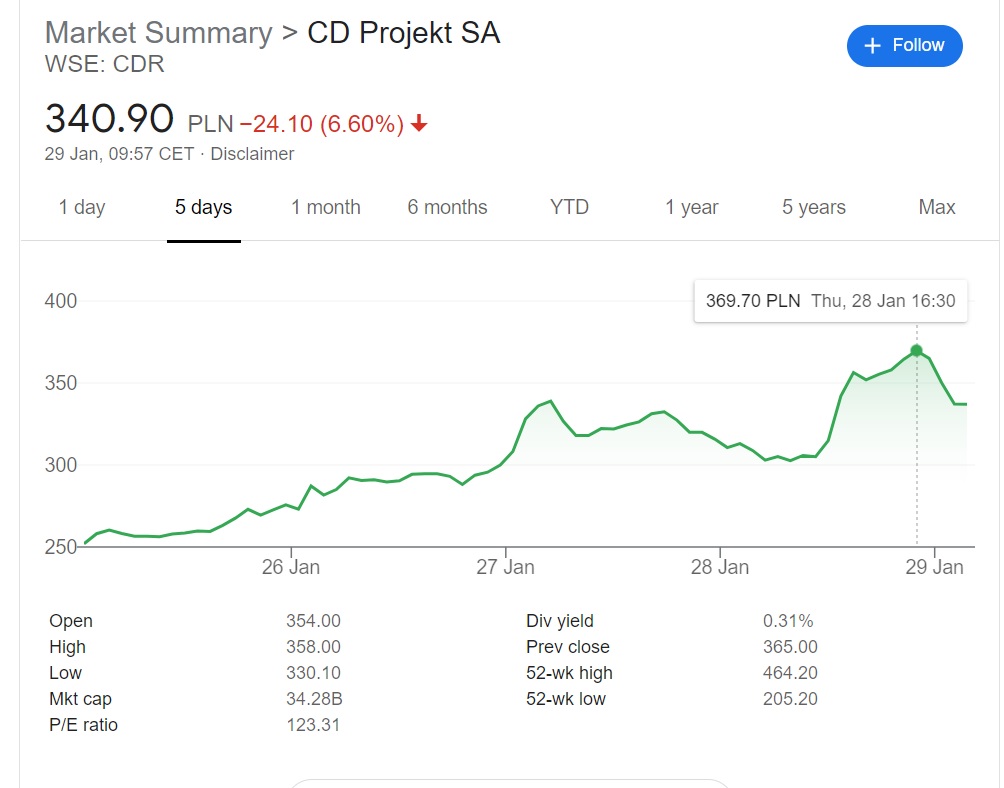 It’s been a rough couple of months for CD Projekt. The disastrous launch of Cyberpunk 2077 not only led to a severe backlash from players, but its own investors have filed lawsuits against it.

Fate appears to have thrown the studio a bone, however, as its stock price suddenly rose by nearly 20% yesterday, January 28.

Considering the timing, it’s believed this is a result of a tweet by Elon Musk. Yesterday, he posted a series of tweets about a new Tesla Model car, making an offhanded comment about how it can play Cyberpunk 2077 and complimented the game’s aesthetics.

While CD Projekt’s stock has certainly improved over the last month, it hasn’t quite made up for the sharp drop following Cyberpunk 2077’s release.

It’s also unlikely to put a stop to the aforementioned lawsuits, which came about because of disgruntled investors, who are accusing CD Projekt of sharing deliberately misleading information about the game’s performance before it released.

It seems rather bizarre that a single person can alter a company’s stocks with one innocuous comment, but the last couple of days appear to have highlighted how nonsensical the stock market can be.

In case you’ve missed it, Reddit and Discord users managed to artificially increase the stock prices of American retailer GameStop, seemingly just for the LOLs.

This led to hedge funds losing money, as they had placed large bets against GameStop’s stock rising.

The situation only escalated from there, drawing the attention of Musk and even the White House, with the New York Stock Exchange forced to halt trading multiple times.

Cyberpunk 2077 is available on PC, PlayStation 4, and Xbox One. PlayStation 5 and Xbox Series X/S versions are planned for this year.