Cult Of The Lamb: Who Is The One Who Waits?

In Cult Of The Lamb, the protagonist's power is granted by an eldritch deity called The One Who Waits Below. Usually shortened to The One Who Waits (or simply him), the god of death has influence over the world despite being chained into his realm by the Bishops of the Old Faith.

As the Lamb's Crusade progresses, you'll learn more about the history of The One Who Waits and his relationship to his captors. Usually imparted by the sage Haro, these stories hint at a much deeper setting and lore than what is seen in the game.

This article contains major spoilers for Cult Of The Lamb. 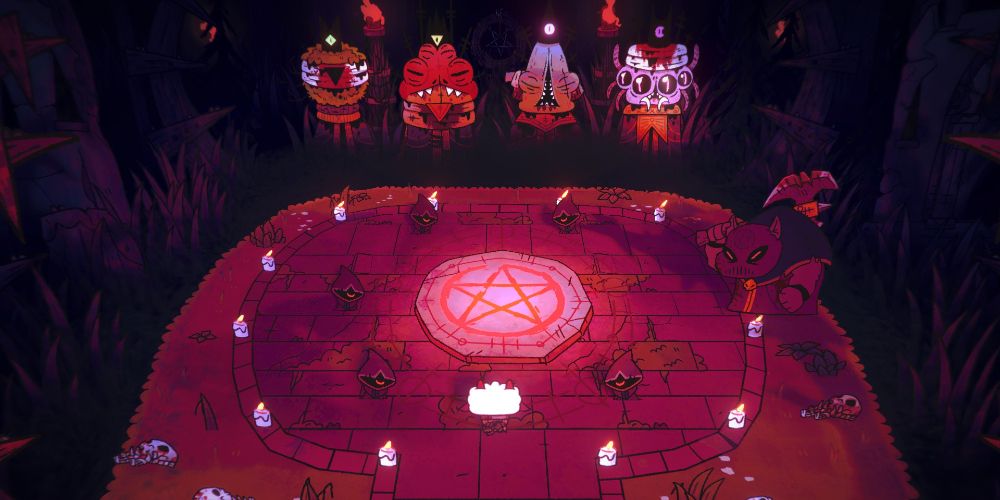 During the Lamb's first meeting with Haro, the sage reveals that there were once hundreds of gods ruling over what are now the lands of the Old Faith. Based on what we see during the game, it seems that any mortal creature can attain godhood by cultivating worship and sacrifices from others. No doubt the smaller cults merged over time as their gods were defeated, forgotten, or cast down.

By the time of the Lamb's Crusade, the Old Faith has been the dominant religion in the area for at least a thousand years — likely much longer, as Heket refers to that last millennium as a short while by her immortal reckoning. The Old Faith came from a unification of five sects, each dedicated to a different god called a Bishop:

The Bishops refer to themselves as siblings, though it is unclear whether they are related by blood. 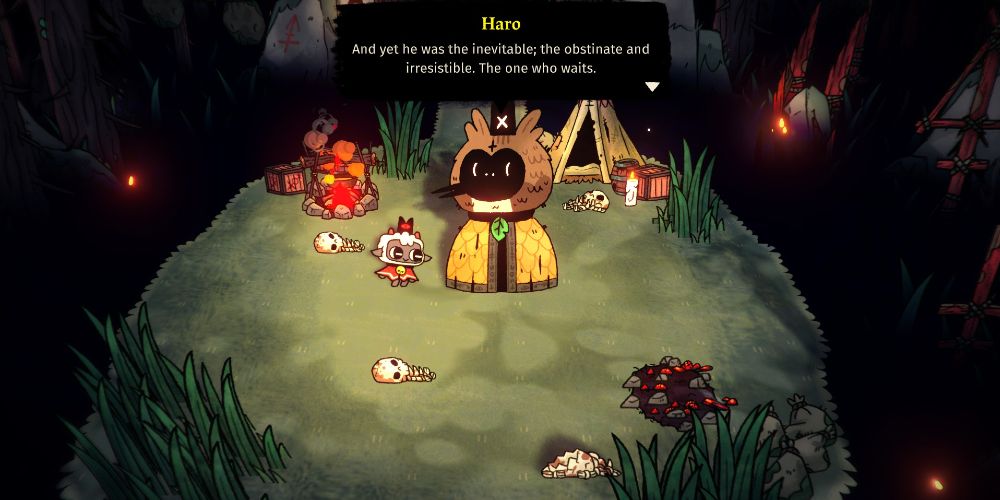 As Haro tells it, Narinder was an outlier among the Five Bishops. His siblings were, by their nature, agents of change, but as the god of death Narinder's role was always the same. All the other Bishops' machinations would eventually lead to him, and he would always be there, waiting for souls to cross into his realm.

As the millennia wore on, Narinder grew restless. He wanted to expand his domain and try new things. Shamura admired their brother's ambition, growing to love and respect him for it. Shamura was also a god of wisdom, so they sought to impart gifts of knowledge on Narinder to help him further his goals.

While it's not confirmed entirely, Heket seems to suggest that the Red Crown was a gift to Narinder from Shamura. This would make sense, as the Red Crown holds much of The One Who Waits' power and the Bishops seem just as frightened of it as they are of their brother.

Blessed with wisdom imparted by Shamura, Narinder began to experiment with new rituals and magic. Ultimately, however, death is absolute and irreversible; it cannot grow, evolve, or change. Narinder persevered nonetheless, attempting to break fundamental laws of nature that even gods must obey. Seeing their deity's folly, the worshippers of the Old Faith began to question the pantheon. 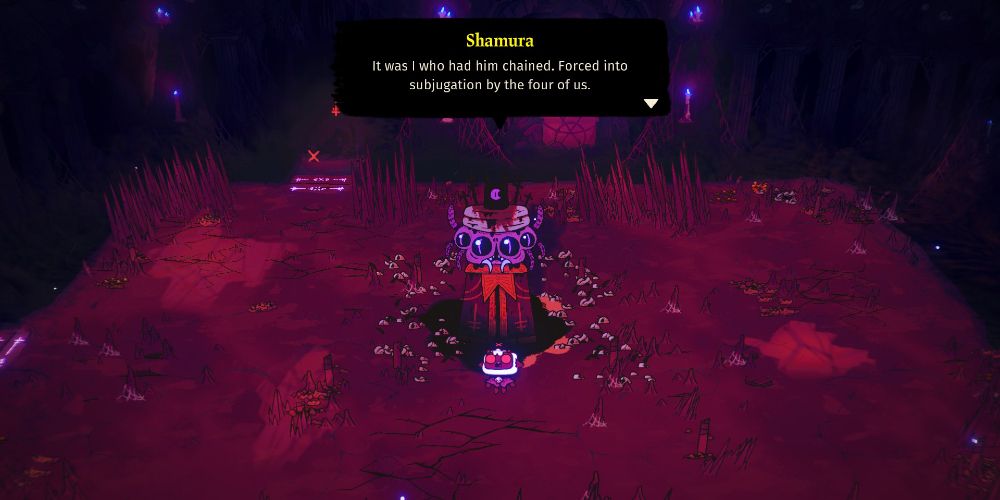 Shamura recognized that their gift to Narinder had created an existential threat to the Old Faith, and possibly the world. They approached their other siblings — Leshy, Heket, and Kallamar — and proposed a ritual to bind Narinder to his realm of death for eternity, preventing him from walking the earth or using the full extent of his powers.

Each of the Bishops made a sacrifice of their flesh for the ritual; Leshy had his eyes gouged out, Heket's throat was slit, and Kallamar cut off his ears. Shamura, as leader of the rite and the one to blame for Narinder's instability, paid the heaviest price of all — their skull was split open, robbing them of a portion of their divine wisdom. As gods, the Bishops are able to live with these wounds largely unimpeded, but they have been bleeding and bandaged for the entire millennium since the rite took place.

Narinder was cast into the afterlife and bound there with four chains. Each chain was linked to one of his siblings, and cannot be broken as long as its controlling Bishop lives. To ensure that he could not exercise power through his followers, the Bishops then hunted down and slaughtered all of Narinder's worshippers.

The Prophecy Of The Lamb 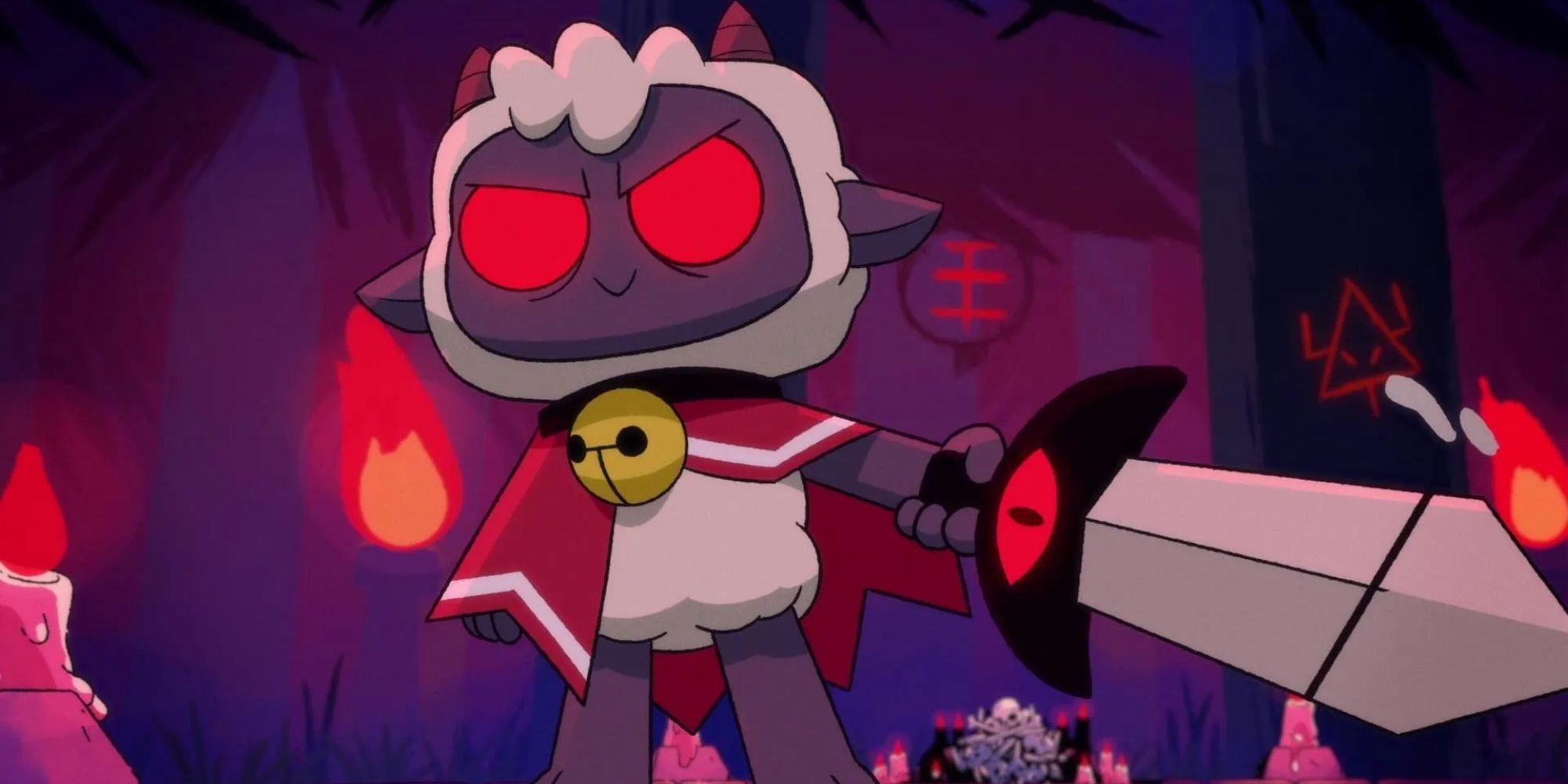 Before losing their knowledge, Shamura received a prophecy that a Lamb would be the final vessel of the Red Crown, rekindling Narinder's cult and destroying the Old Faith. The Lamb would free The One Who Waits Below by killing the four Bishops, and usher in a new age.

Desperate to prevent the prophecy from coming to pass, the Bishops spent the next thousand years offering up sheep in sacrifice to keep Narinder chained below. At the start of the game, they have nearly succeeded — there is only one sheep left in all the world, a young Lamb about to face death at the hands of the Bishops of the Old Faith…