As part of our ongoing coverage of Crisis Core: Final Fantasy 7 Reunion, we're bringing you an in-depth look at the game's second chapter. Zack tags along with Turk leader Tseng, but not before spending some quality time getting the lay of the land back in Midgar.

Our guide will tell you everything you need to know, and maybe even sprinkle in a few things you don't need to know. Suit up for your next mission, Final Fantasy fans, and get ready to slice through literal missiles with a sword before it's over. 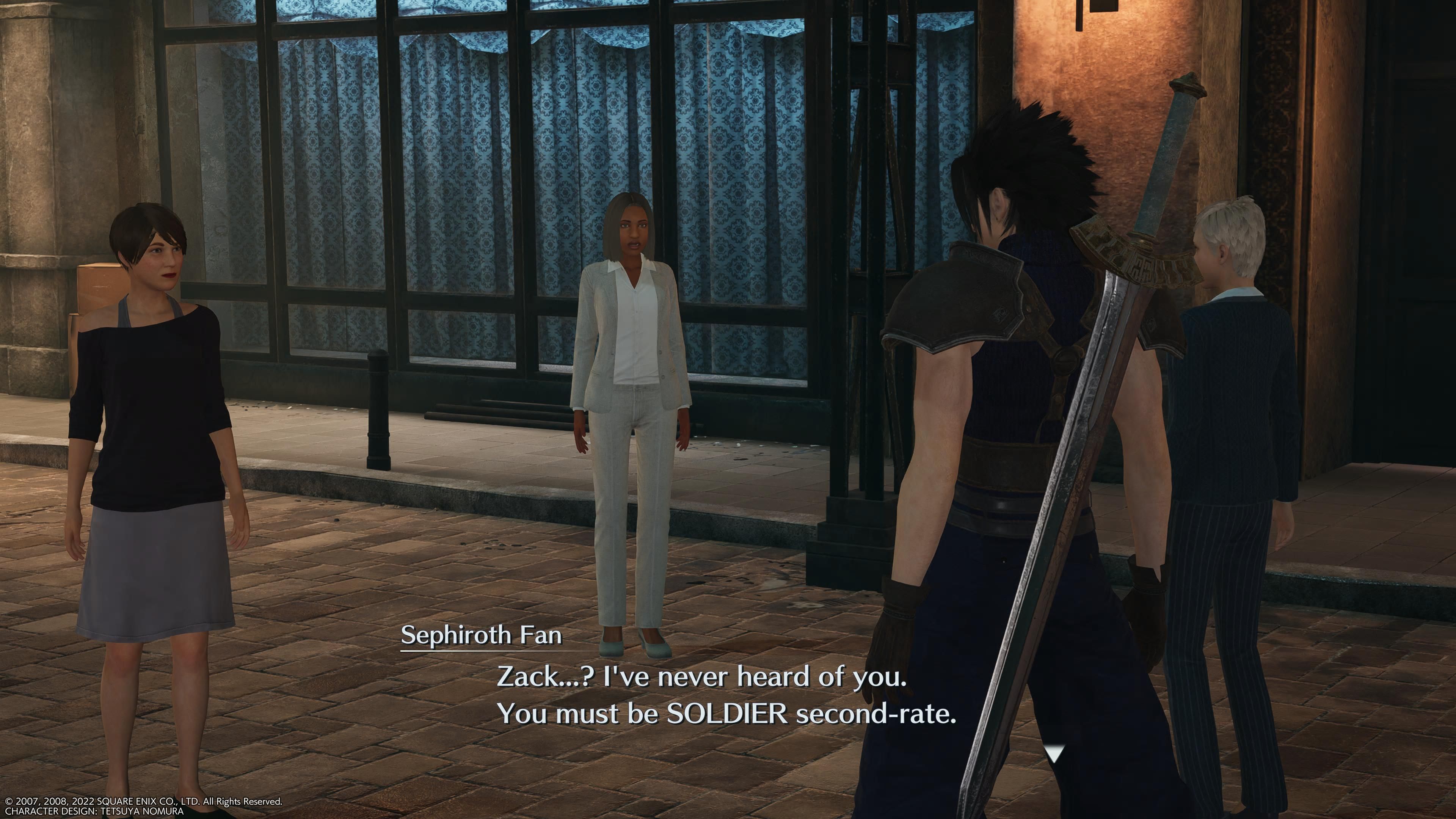 There's urgent business in Banora, so naturally, Crisis Core being an RPG means it's time to hit the streets and have fun first instead. Kunsel sends Zack out into Sector Eight. You can head back and continue the story at any time, but you should totally explore to your heart's content beforehand.

Chat folks up, but be sure to swing by the three obsessed fans to the right of the initial area. Speak with each of them a second time after they've given you their club's overview, and you'll be able to join Angeal's and Genesis'. Sephiroth's club is too exclusive for the likes of Zack. Ouch.

Joining these groups is great because not only do you get cheeky emails from time to time, but more importantly, they're key to unlocking a few missions down the road. There's also a woman on Loveless Avenue who can get you into a second Genesis club. While you're hanging out on Loveless Avenue, though, your biggest goal should be conversing with the lone Shinra security guard on one of the side roads. 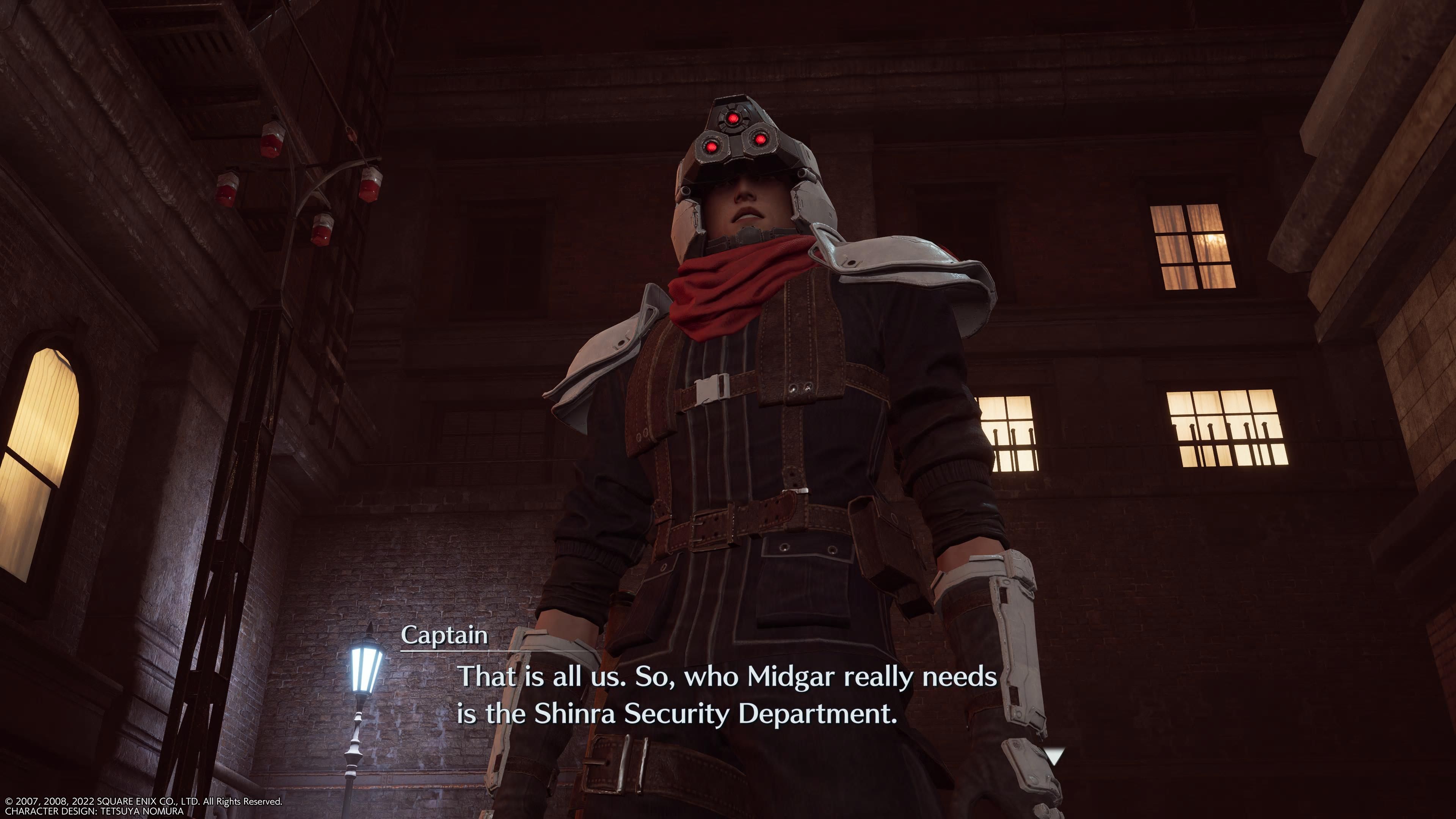 This soldier has it out for SOLDIER. He's going to prove his own organization's worth by humiliating Zack in a mission that gets added to the list immediately after speaking with him the first time. It's a cakewalk. In truth, every subsequent mission in this cluster is either a cakewalk or close enough. You can probably go ahead and get through them straight away.

Completing this string of missions is how players can acquire one of the parts for a better wagon for Aerith later on. It isn't necessary, but it sure is sweet, so hop to this ASAP.

Shinra Building And A Multitude Of Missions 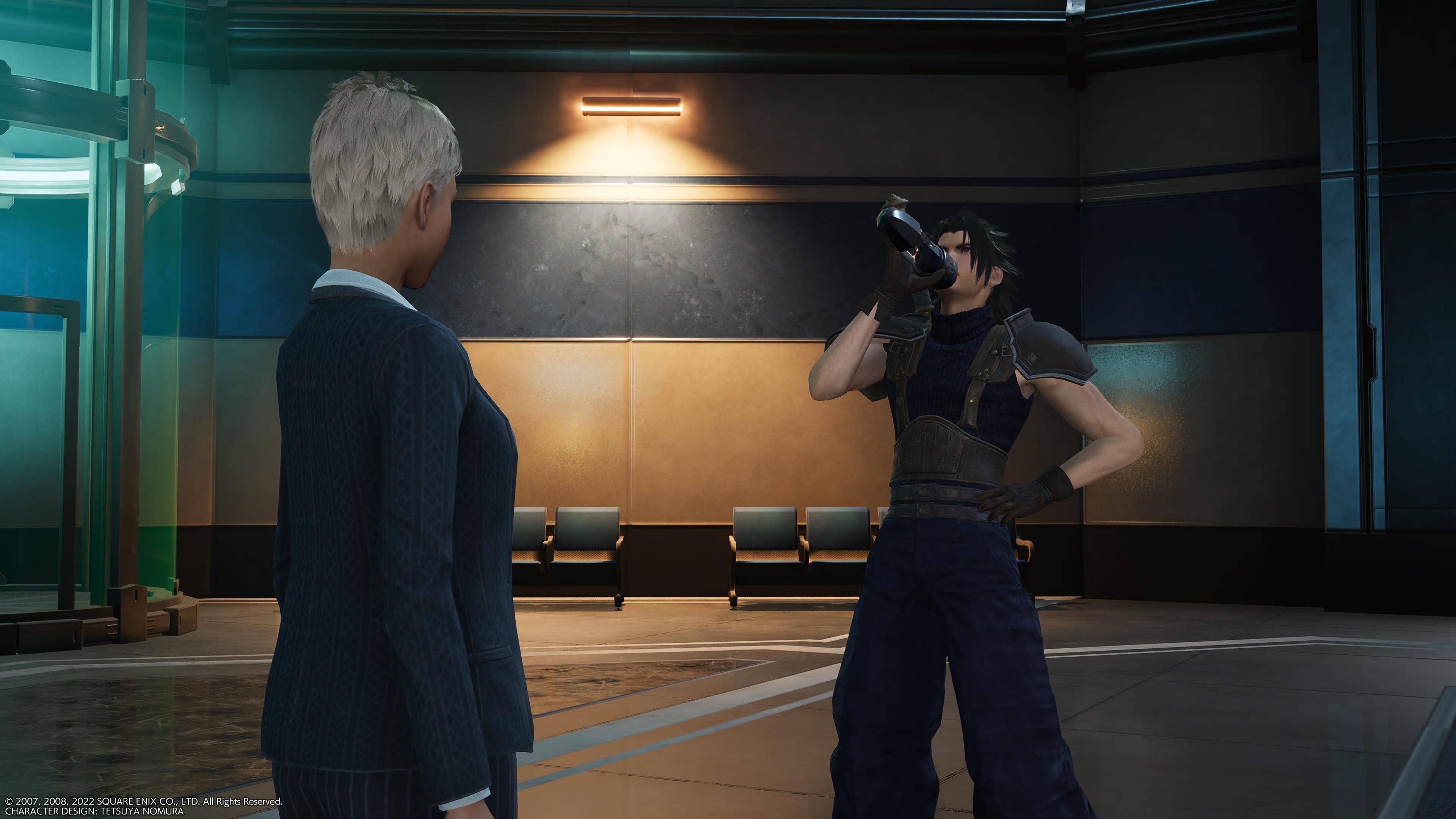 When you're ready to head back, you'll be able to check out the Shinra Building's lowest floor, which features a nifty display room of various technological marvels. Even better, there is a woman standing out in the main lobby who offers 'potions' for free. These aren't regular potions; they grant Zack the Raise status, meaning he'll return from being incapacitated one time.

This lady's here for several chapters, so chatting with her between missions, and surely between chapters, is highly advisable. Now, speaking of missions, there are plenty available. Plenty more pop up upon completion of the current batch. How many you wish to do now, rather than later, is totally your call.

You will almost certainly hit a roadblock due to the increasing difficulty of these stages. That's normal, so don't fret that you're underleveled. In reality, tackling a bunch of these pretty much guarantees you'll be above the main story's minimum recommendations in that regard.

If you can make it through the 6-3-X mission series, the Crystal Gloves reward from 6-3-4 offers +20 on Attack and Magic. That's fantastic, especially for this point in the game.

Almost immediately after you gain control of Zack, you'll be up against a Guard Spider mech. It's not quite a big enough ordeal for us to call it a boss fight, per se, but with over 7,000 HP, it'll take some time before it goes down. Bringing Thunder to the match (or Thundara if you manage to have it already, all the better) will even the playing field. Of note, there's nothing Guard Spider tosses at you that can't be evaded naturally.

The game will tell you this, but it's worth repeating. For the next couple of screens after the courtyard outside Genesis' childhood home, numerous green splotches of sorts are visible and should be interacted with while you have the chance to do so. These are little Lifestream bits poking out of the earth or something; what matters is they'll become obtainable items later into the chapter.

Knocking at the various houses as instructed will lead to a whole lot of nothing, except the time it triggers a battle. The only place you need to go is the lone house dead ahead from the entrance to this map. Here, Zack finds Angeal's mother, and after a touching slice of story, things heat up for the operation. 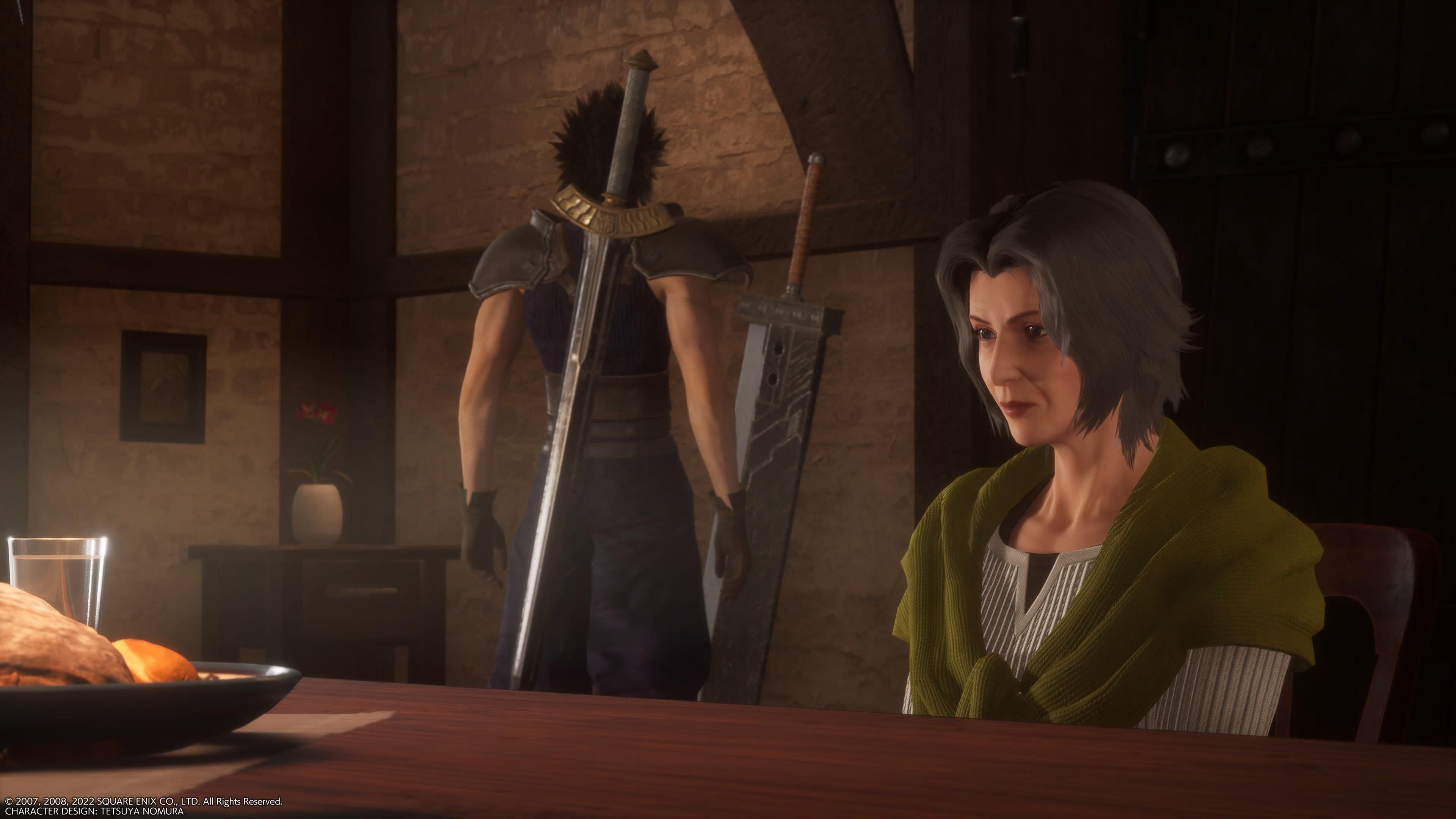 The Factory And Evacuation 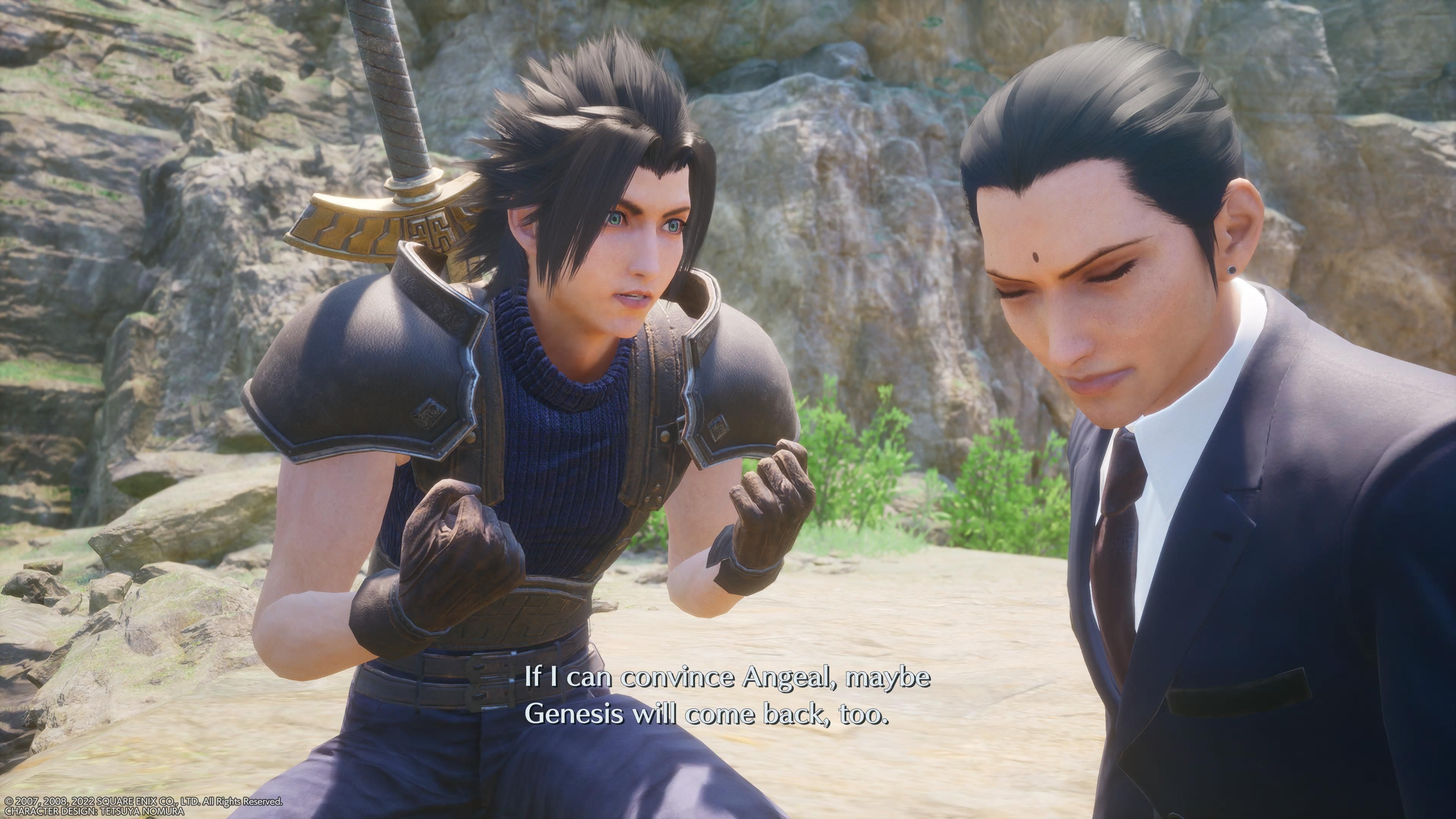 Follow Tseng's orders and approach the factory from afar. That is, unless you want kind of a funny little scene first, in which case go toward it directly. Tseng scolds Zack for failing to heed him, and the distance between them per in-game graphics makes it look like they really ought to be conversing in-person rather than via phones. We're probably overselling the humor, but it's a chuckle.

The factory interior is roughly as linear as any of Crisis Core's mission maps, so needless to say, you shouldn't get lost in there. Random encounters include Genesis copies that might hit harder than you'd expect, but with the aforementioned Crystal Gloves, you'll certainly hit that much harder. If you find yourself overwhelmed by too many foes at once, Fire/Fira is great for crowd control.

After Zack and Tseng escape the factory, a quirky mini-game begins in which Zack must slice through as many incoming missiles as possible. They'll make a telltale sound and then come into view, as Tseng describes. You could save and reload your file ahead of this if you'd like, but frankly, the rewards aren't all that great for slicing through them all.

1,500 gil is the most that can be earned from this, but that's not exactly a stuffed purse. Probably the best thing to happen if you earn a perfect score is that Tseng's impressed. So, there's that. The follow-up 'minigame' of sorts is more important. You only have one minute to reach Angeal's house to rescue his mother, and all those Lifestream spots now contain items.

There are five in all. The best of the bunch are the Phoenix Down and Elixir, so again, nothing major. But better than the gil. Just make sure you leave enough time on the clock to get to the house! 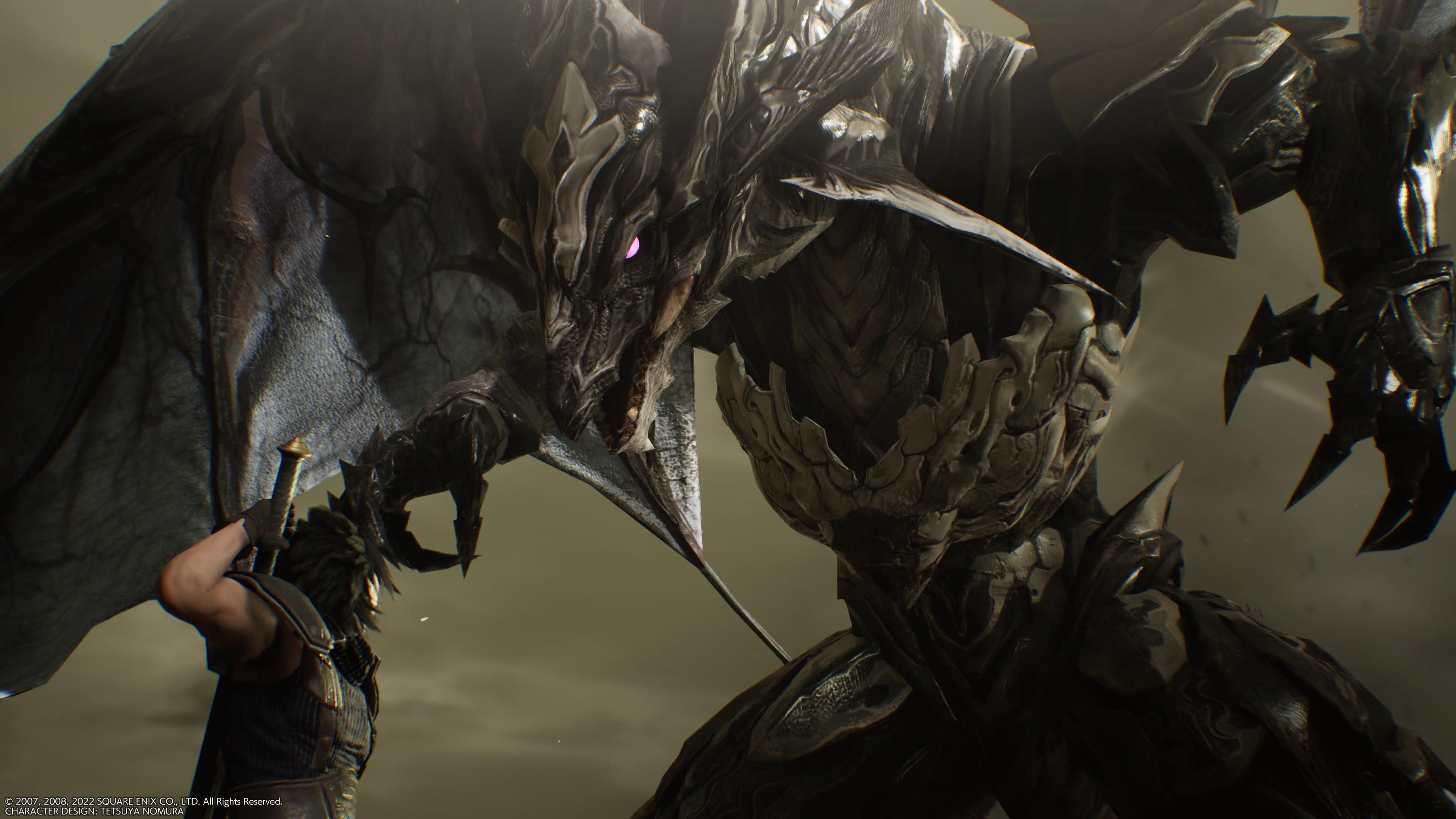 That escalated, right? Ifrit being the first summon boss is somewhat predictable, but Bahamut being merely the second, less so. Let's get into its attacks. The homing lasers can be avoided simply by giving them the run-around. They won't last long before bursting into the ground. You can block the lightning strikes, or you can run when the air fizzles as a telltale sign, but the damage here isn't so bad. Getting stunned for a couple of seconds is the real nuisance.

Bahamut also has a couple of physical strikes which involve it lunging down to the surface from above. In both formats, it can be dodged pretty easily, but it's hardly the end of the world if you're hit. The main threat in this fight is the Limit Break, Mega Flare, which will shave off two-thirds of Zack's HP upon casting. It won't outright kill you, which is great! But it sure can get you prepped for the fall. Cure Materia and Potions for the win here.

You might have noticed we've done nothing to speak of your own attacks. It's pretty much dealer's choice. Bahamut isn't weak to any particular element, so just roll Magic with whatever's the most powerful, swapping into AP-based strikes built up in power through normal attacks. In other words, treat the fight how you would just about any other in Chapter Two, except that you're in a much defensive situation.