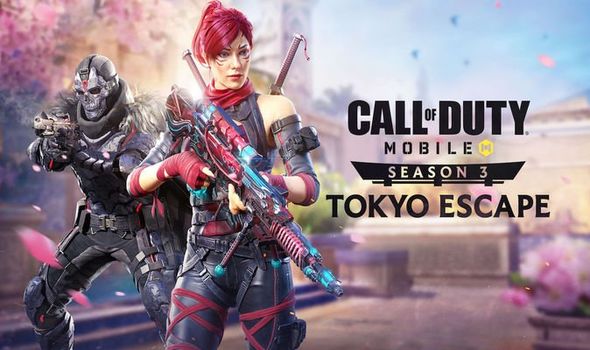 Call of Duty Mobile Season 3 is about to make its debut on iOS and Android.

Season 3 – which is subtitled Tokyo Escape – has an April 17 release date for fans living in the UK.

The Season 3 update will be available to download from 1am BST. Fans in the US can download the patch from 5pm PT on April 16.

“Season 3 ushers in a new chapter as well as a whole suite of new content, including two new Multiplayer maps, new weapons, the Overclock perk, new Operators and weapon Blueprints, events and challenges, and 50 tiers of new earnable rewards across the Season 3 Battle Pass.”

As Activision points out, the Tokyo Escape Battle Pass features 50 tiers of free and premium content.

Fans can move up the tiers by earning XP. Each new tier brings a fresh reward, including emotes, Operators, Calling Cards and skills.

Speaking of Operator Skills, the Bull Charge is unlocked for free at Tier 14, while the new PP19 Bizon submachine gun is free at Tier 21.

Other free rewards include the Samurai Tuna Charm, the Samurai Chop Calling Card and the Severed camo series.

Premium Pass rewards, on the other hand, include COD Points, the Way of the Sword emote, and two new Operators.

Arguably the most exciting new additions are the Oasis and Coastal multiplayer maps.

“Take the fight to new locales as Oasis and Coastal join the Season 3 Multiplayer map rotation.

“First introduced in Call of Duty: Modern Warfare 3, Oasis sets the scene in a luxurious desert hotel. This medium sized map challenges Operators to battle it out across the hotel courtyard, spa, and parking lot, using every opportunity to outflank and outsmart opponents.

“Coastal is a brand new map set in a cozy sea town. The skies are clear and the weather’s perfect for competition. Fight outdoors across broad, paved lanes, or weave through the map’s indoor locations on your way to the next target.”

That’s on top of the new Swords and Stones, and Night Modes multiplayer experiences.

Unfortunately, however, the two new game modes will be introduced later in Season 3.

Swords and Stones drops players into multiplayer maps with melee weapons and grenades only.

“Take out enemies for a boost to your movement and attack speed, and fight for the Shadow Blade Operator Skill when it airdrops onto the map,” Activision adds.

Elsewhere, the new Spotter class is an anti-air specialist launching as part of the Quick Hands seasonal challenge.