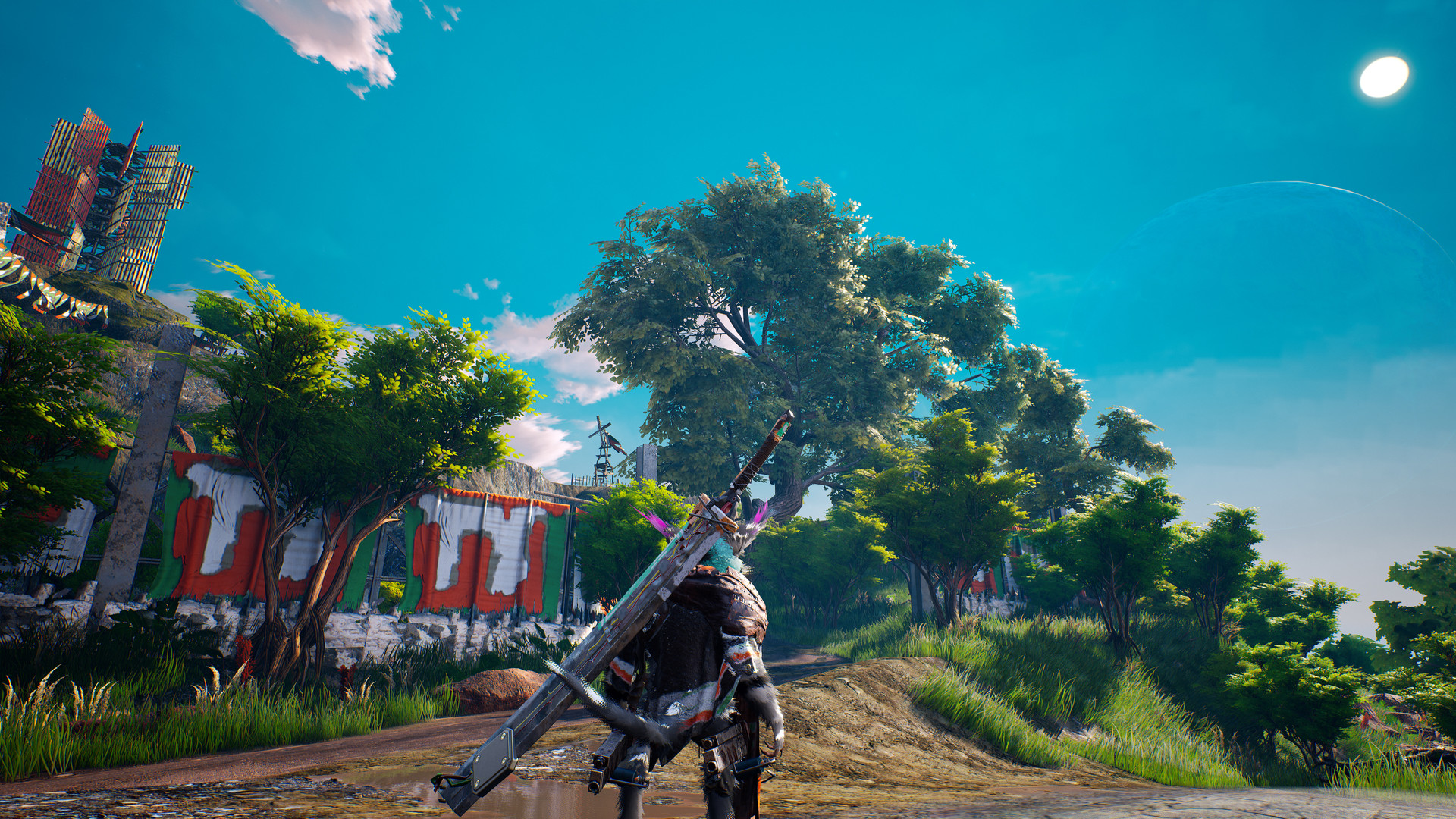 A brand new franchise offers an unusually positive of view of post-apocalyptic life, with one of the prettiest open world environments ever.

If there’s one thing the video games industry needs to encourage more of it, it’s new IP (intellectual properties) – games that aren’t just sequels, spin-offs or licensed tie-ins. So it’s very upsetting when, within the first hour of playing just such a thing you get the overwhelming feeling that it really isn’t very good. That’s even more unfortunate when there are positive elements, such as the graphics and the customisation option, that the rest of the game never properly utilises.

Although the presentation is almost that of a children’s story book – we’ll get into the tonal inconsistencies shortly – in gameplay terms Biomutant is a fairly standard open world action role-playing game. It’s a while before the setting becomes clear but it’s essentially post-apocalyptic, except instead of arid deserts and ruined skyscrapers the landscape is dominated by lush greenery rather than the ruins of the old world.

The implication is that the various tribes are evolutions of previously non-sentient creatures, with their current forms all looking like anthropomorphised rodents, bears and the like. Most are not identifiable as anything specific though, with your own player character being merely vaguely cat-like. Or at least they are before you start mutating them further.

The actual plot of the game involves a Tree of Life being slowly poisoned by an oil spill, as monsters gnaw at each of its many roots. You can imagine what role you have in all this is, but as well as defeating the Worldeaters you’ve also got to recruit the six tribes to your cause – except it’s impossible to get them all onside at once and so you have to choose whether to pit one against another in order to leave only Tree of Life-friendly allies.

These almost Game of Thrones style machinations sit awkwardly beside the game’s peculiar presentation, which includes an ever-present narrator who seems to be trying to do an impression of the book out of Hitchhiker’s Guide to the Galaxy, except without any jokes.

All the animals speak in a gibberish noise and the narrator has to translate these back to you in English, preceded by comments like ‘He says’ or ‘She thinks’. That not only ensures every conversation takes twice as long as it should but immediately distances you from it as well, ensuring it’s almost impossible to care about any of the characters or events.

The tone Biomutant takes is fairly bizarre given the combat is like a simplified Devil May Cry, as you switch between guns and swords. The aiming of the former is never quite reliable enough though, with an airy lock-on system that always seems to have ideas of its own about who you should be shooting at. The melee combat is better but it’s not very varied, with everything revolving around getting in three combos so you can perform a super move.

The action is fine once you get used to it, and there’s a good sense of scale with a lot of the bigger enemies, but there’s too little feedback to get any real enjoyment out of it (apparently nobody wants to see blood or damage with all the furry animals).

As you continue to level up you get access to more elemental magic abilities and psychic powers, some of which are limited by what character class you choose at the beginning. The most interesting element of customisation is the weapons though. Not because there’s a massive difference between most of them but because they’re all made out of different bits of post-apocalyptic detritus and fitting together broken road signs and machine parts with little or no restriction is quite fun.

The fact that you have to resort to such minor parts of the game to provide entertainment says it all though, as you quickly settle into a predicable routine where each boss has to be defeated using a different vehicle that you have to find the parts for before it works. Not only is the structure formulaic but it also undermines the whole customisation aspect of your character, in that you end up beating the game’s biggest enemies when behind the wheel of a speedboat or mech – not using your own abilities.

In the end, the best part of Biomutant is simply the open world itself. There’s nothing terribly interesting going on in it but it is very pretty, to the point where we thought we were playing the PlayStation 5 version at first. The colourful visuals are a real breath of fresh air, especially for a post-apocalyptic game, and the only downside is that the animals aren’t really that cute, even though we think they’re supposed to be.

The real problem with Biomutant though is that it’s not really a new game at all. It may not be a sequel but the influences from other games, from Zelda: Breath Of The Wild to Fallout, are very obvious and almost never done as well as in the original games. The moral decisions, for example, usually lack any kind of grey area and none of them seem as important as the one you make right at the beginning, about which of the first two tribes you back – one of which is obviously good and the other of which is obviously evil.

We would given some credit to Biomutant for trying something new but most of the time it’s not, it’s just copying other games and doing what they do but not as well. Its own unique ideas are invariably the most interesting part of the experience but they’re not nearly enough to keep your interest.

In fact, this is one of the most boring games we’ve played in quite a while, with nothing so bad as to be funny or anger-inducing and nothing good enough to make you actively look forward to more. Biomutant may not look like a typical post-apocalyptic game but most of what it offers has been seen many times before.

In Short: It’s very pretty but this patchwork of other game’s ideas never has enough of its own to keep you interested during the repetitive and overfamiliar open world action.

Pros: Beautiful open world environment is one of the best of the outgoing generation. Crafting system for weapons is neat. Vehicles are fun, even if they do undermine your character’s abilities.

Cons: The formulaic mission structure and unexciting, repetitive combat quickly becomes a chore. Terrible storytelling choices distance you from the plot and characters.