Assassin’s Creed: Odyssey is a unique entry into the franchise because of how many roleplaying opportunities it provides to the player. By the time they’ve finished the main story, the gamer’s choices (even seemingly insignificant dialogue options) will have massive repercussions. This trend continues into the game’s two big DLCs.

There are nine possible ways that Assassin’s Creed: Odyssey can end (more specifically, nine ways its cultist plot can end). Which one the player receives is determined by how many of their family members they saved during the course of the campaign. These living relatives join Kassandra or Alexios for dinner at their childhood home in Sparta. 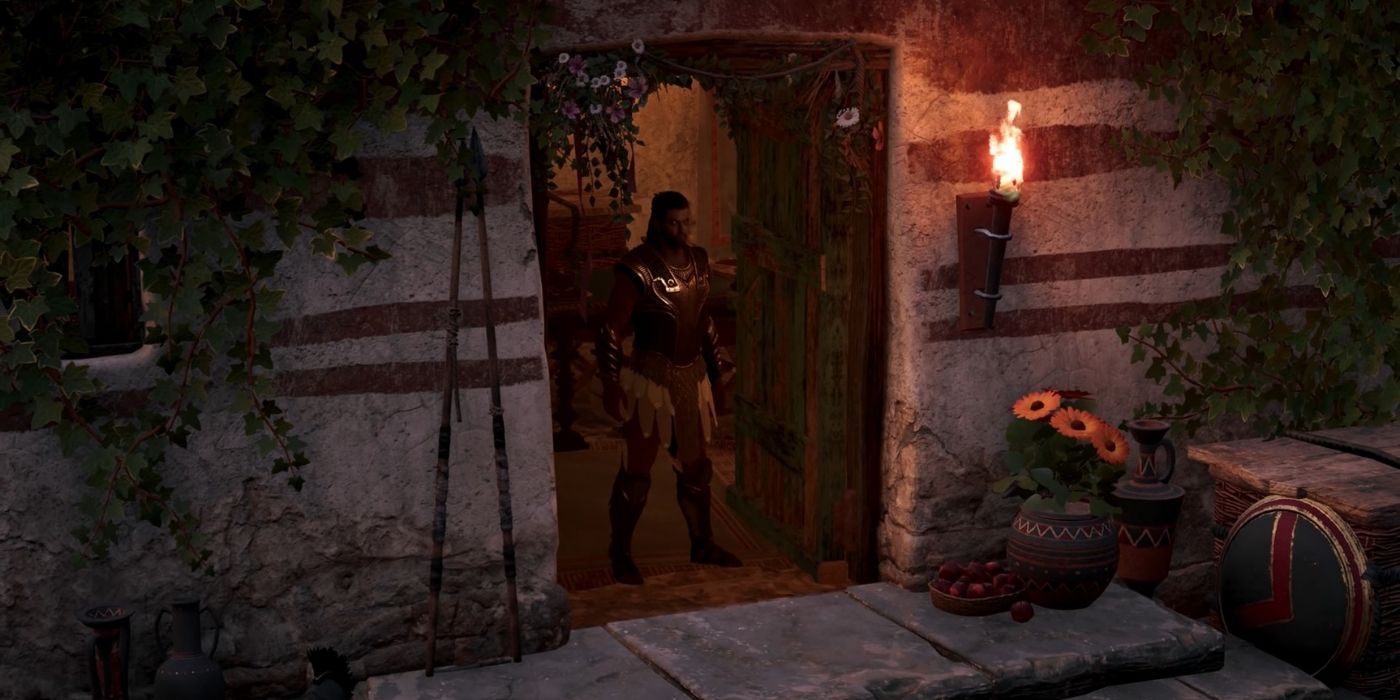 In the saddest ending in Assassin’s Creed: Odyssey, the player character is alone at their dinner. They prepare food but can’t bring themselves to eat it — they just stare wistfully at the empty room before swearing softly and leaving the table. When they venture outside, Ikaros is perching nearby and squawks. It pulls a slight smile from them but, after lingering for a moment in the doorframe, they return to their solitary meal. Not only is this the most heart-wrenching final cutscene of the game, but the events leading up to it are equally terrible — you’ve killed your stepfather and stepbrother, your mother’s dead or missing, and Deimos is gone for good. 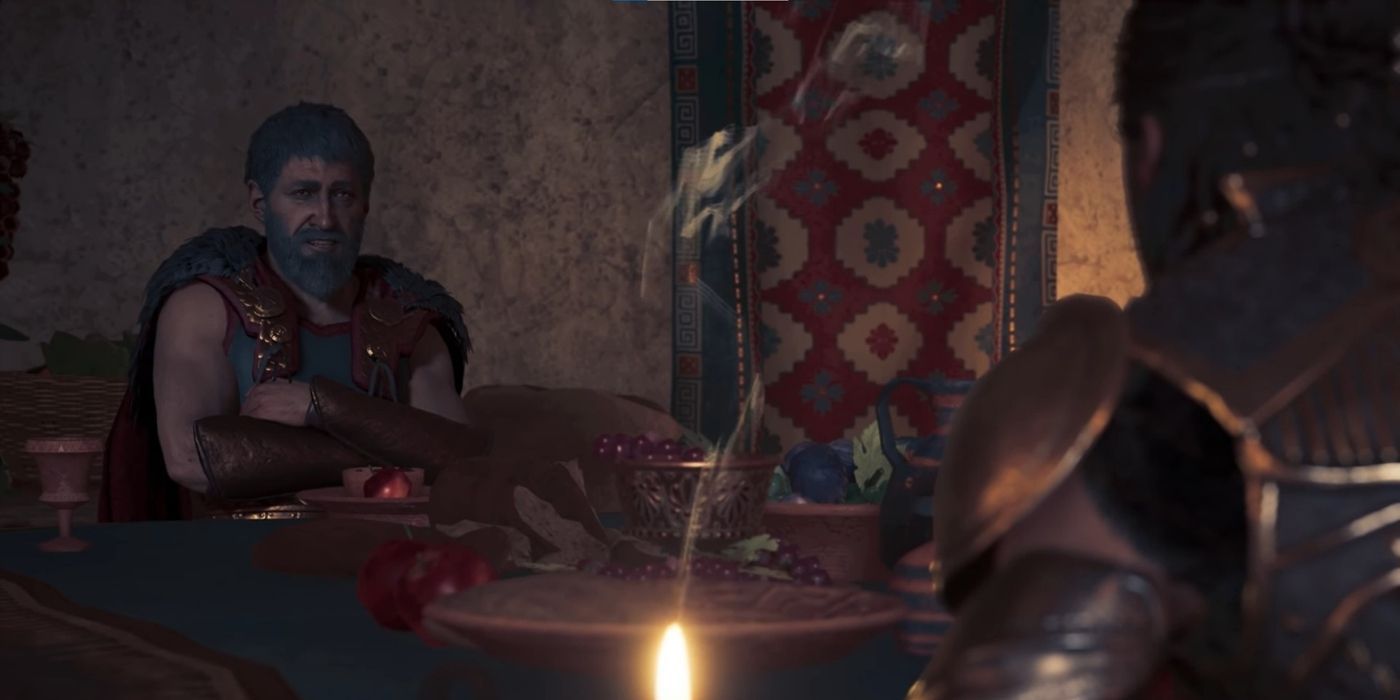 The dinner scene in which only Nikolaos has joined you is slightly less depressing. The pair eat in silence until Nikolaos comments on how strange it is to be in “this house” again. The player comments on how small it is compared to their memories… and how empty. Nikolaos seems to share their melancholy for a moment before reminding them optimistically that they are still there, even if no one else is. The gamer can feel the tension, the collective regret, and the hidden pain permeating the room.

Having Nikolaos and Stentor join the player for dinner is slightly less depressing than the previously discussed alternatives. The group sits quietly around the table until Kassandra asks Stentor to pass the wine. Stentor responds by chugging what wine remained in the amphora and responding that they were “all out.” This family clearly doesn’t get along — not yet, anyway — but put up with one another because having some kind of family is better than none at all. 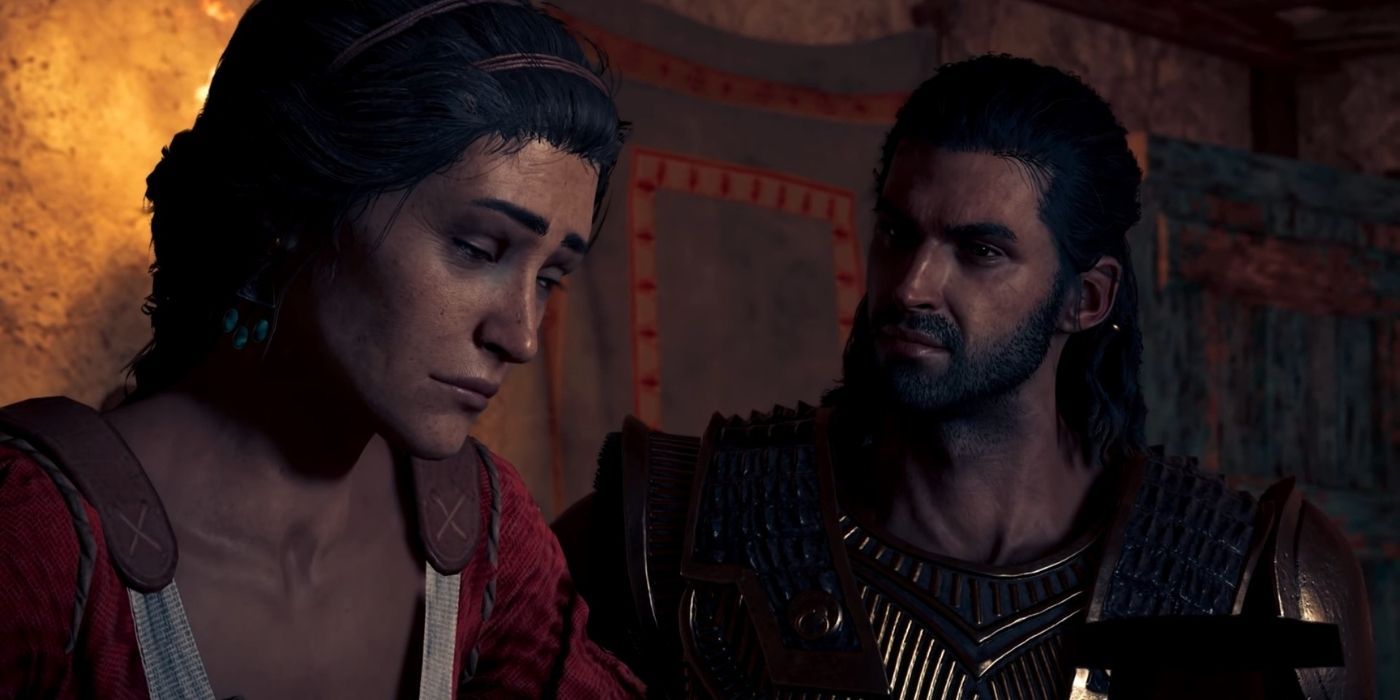 Any ending with Myrrine in it is better than the ones without her. As the player’s mother, she brings a familiar, comforting atmosphere to the event, even if other family members have been lost. These dinners don’t feel so much like a gathering of convenient strangers.

In the ending where Myrrine is the only family member left, she and the player reminisce about childhood memories. Myrrine is clearly heartbroken over the loss of her child, so the player comforts her by saying that they have many memories left to create here. 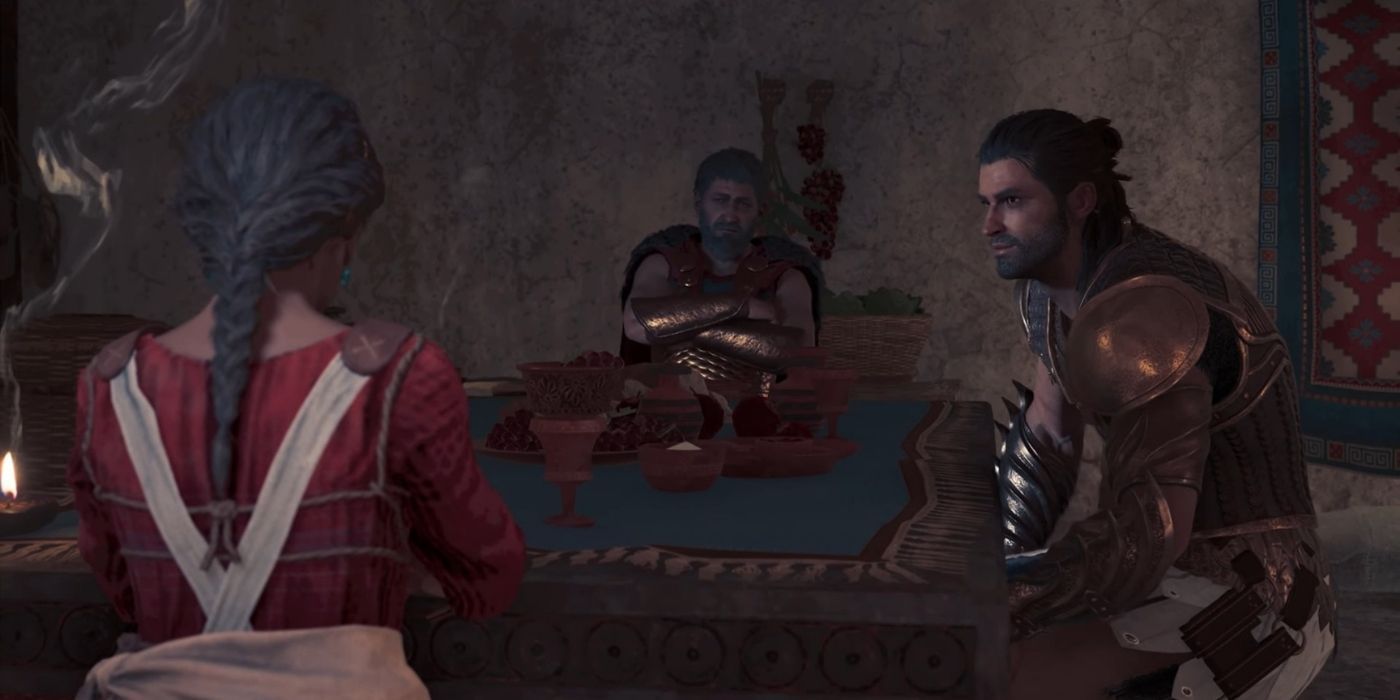 Having dinner with just your parents, Myrrine and Nikolaos, is a quiet occasion. They all sit around the table, making polite conversation. You can’t help but feel pity for them; they know so little about one another and have not yet had enough time to lick their wounds and grieve. Myrrine sums up the atmosphere perfectly when she says: “It’s bittersweet.” Of course, it’s better to have some family alive than none at all, but each parent has lost a child to this odyssey. 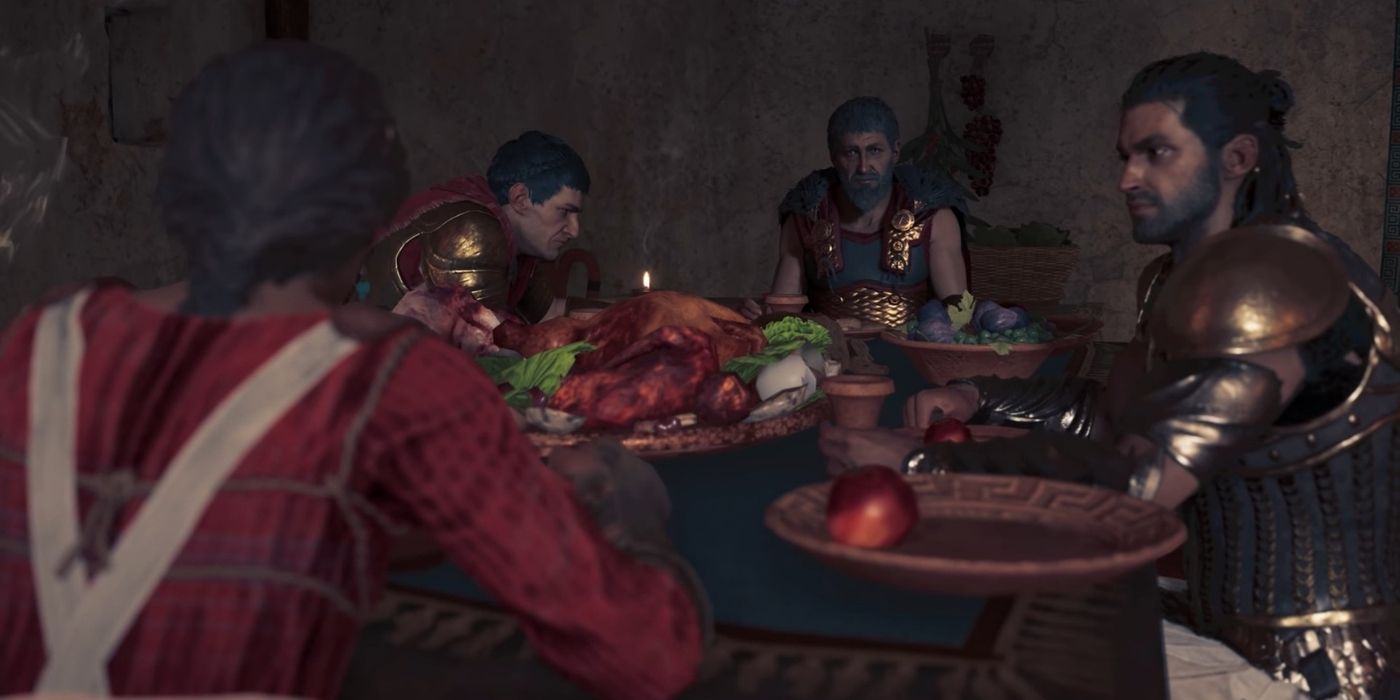 In this ending, the player has managed to save everyone except for their biological sibling, Deimos, so Myrrine, Nikolaos, and Stentor all join them for dinner. Despite four out of five family members alive, this ending is low on the list because of how quiet it is — hardly anything occurs.

Nikolaos comments shyly on how nice it is to have everyone together for once, but Myrrine shoots back that not everyone is here. The player, grateful enough to have any family at all, ends this exchange by plainly saying that they “have each other.” 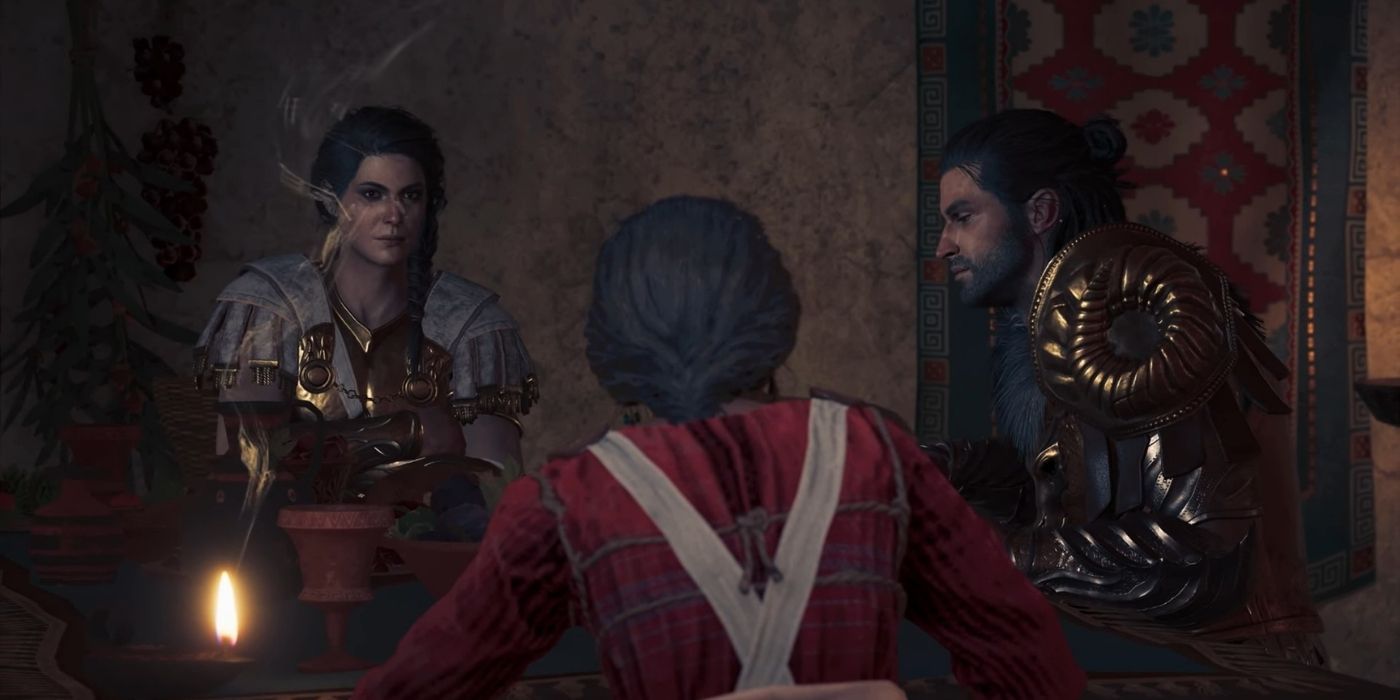 The best endings in the game are those in which the player has managed to save Deimos from the cult’s brainwashing. This is a tricky process, requiring the player to choose particular options throughout the game (even when not speaking to Deimos).

In the third-best ending, the player’s biological family has survived the events of the game. None of them know one another very well… and yet, the echoes of a familiar family relationship survive. Deimos critiques the player for eating “like a wild animal,” and when the player looks to Myrrine for support, she says that they “are at a table.” 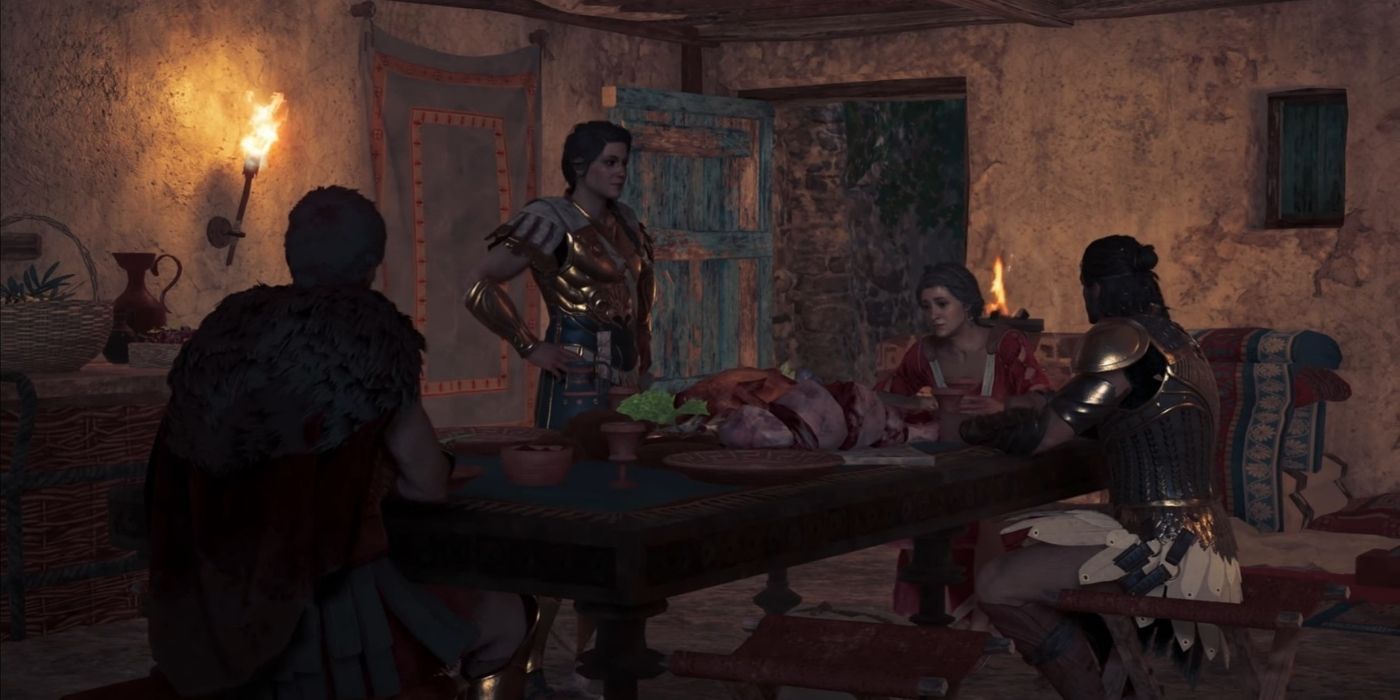 The second-best ending of the game has everyone alive except for Stentor, Nikolaos’ adopted son. The air is tense as they eat; it’s as if this were some staged recreation of a meal they ate together years ago. Finally, Nikolaos asks Deimos if they’d like to go hunting with him tomorrow. After a beat of silence, Nikolaos starts to try and explain himself, but Myrrine cuts him off by saying it’s a good idea. Deimos stands, stabbing their knife into the table before agreeing that it sounds like fun. The family breathes a collective sigh of relief and smiles at one another. 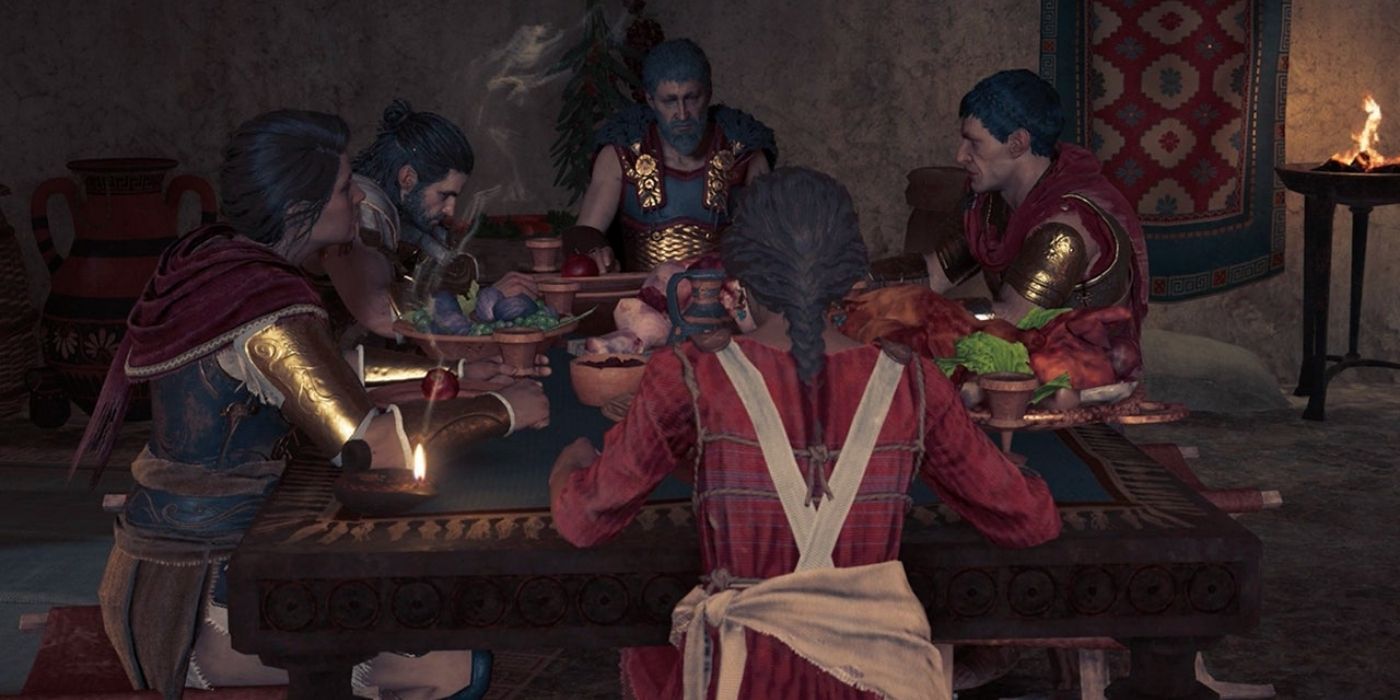 The ending where every member of the player’s family lives is widely considered by fans to be the “best” ending (sometimes also called the “family” ending). To achieve it, the player must have made particular choices at key moments throughout the main story. The atmosphere at this dinner is relaxed, even if they aren’t quite as familiar with one another as a usually family unit would be. A life lesson from the parents quickly turns into a brawl among siblings, as Stentor and Deimos begin to wrestle (if not playfully, at least not violently) and the player searches for more wine. A typical family scene, even after all their hardships.