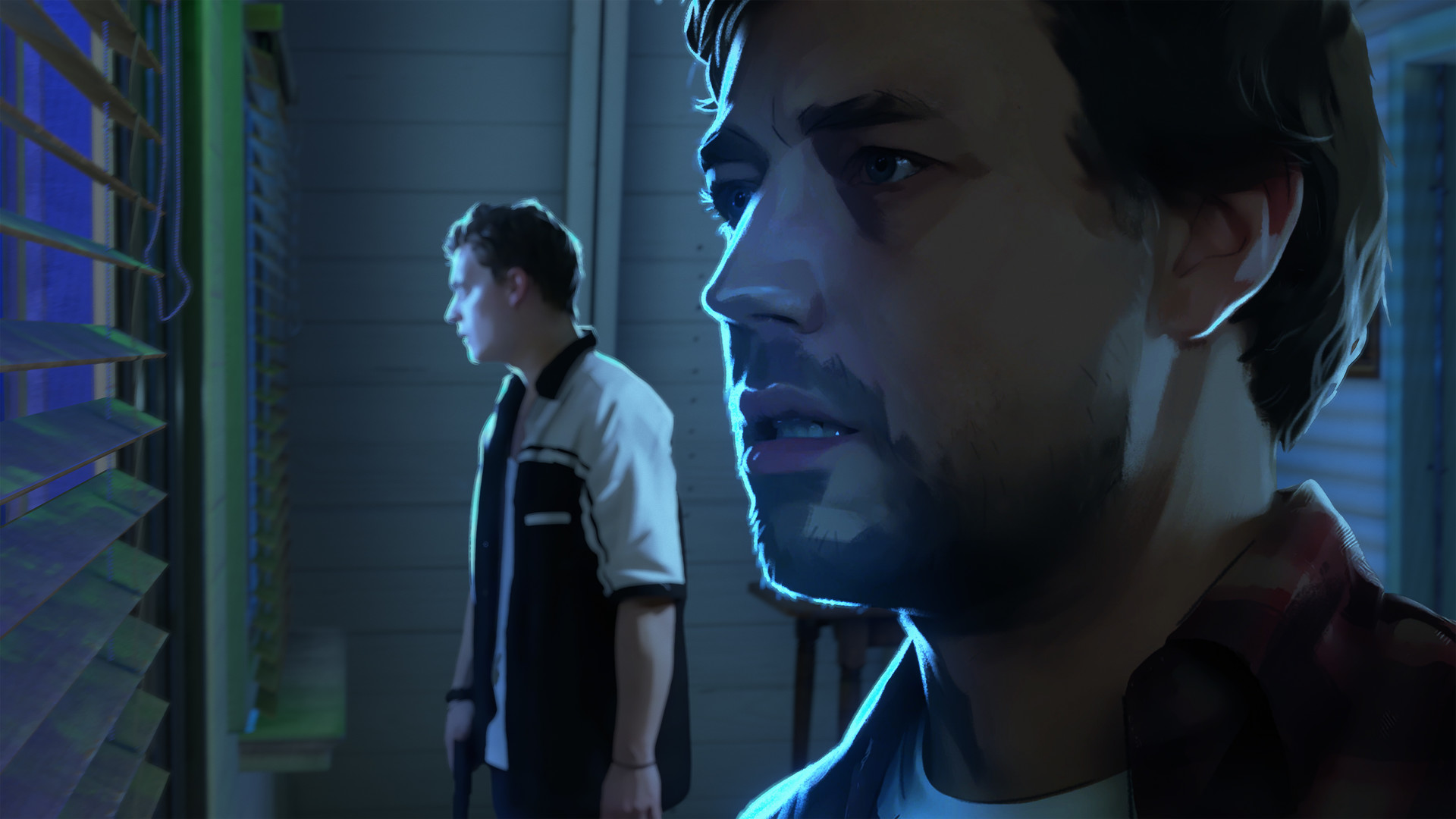 A new Life Is Strange style narrative game, from one of the designers of Heavy Rain, may be the best written video game of the year.

Video games have a problem with nuance, or rather the lack of it. Despite huge progress in graphical fidelity and surround sound, the majority of games still derive their challenge and gameplay either from gun violence or some sort of kinetic activity, whether sports, driving or farming. Even after all that progress the thing games do worst is simulate human relationships.

One way developers of less action-orientated games mitigate that is to limit the range of interaction you’re allowed, usually through multiple choice options. That gives the sensation of freedom without needing to give your console or PC the impossible job of pretending to be a real person. It also means that their games’ plots tend to advance through a series of near-binary choices in a long decision tree, which is the starting point for As Dusk Falls.

Telling the story of a young girl’s childhood trauma and the knock-on effect that has on her life, it starts innocuously enough with a family’s road trip across America in search of a new beginning. The dad’s been fired from his job for an infraction he didn’t cause, and his wife’s been offered a tenured professorship in a different state, so off they go, with grandpa hitching a ride in the back of the car.

After a car accident in the middle of the Arizona desert, they find themselves caught up in a terrifying hostage drama in a one-horse town, with its own dark undercurrents that are initially invisible, at least to some of the characters you’re getting to know. Splitting your time between the dad, Vince, and Jay, the youngest and most reluctant of the hostage takers, you choose how the story unfolds.

Perhaps the most immediate and divisive design choice in As Dusk Falls is its animation. Rather than a full motion 3D world, you’re instead presented with a series of cross-faded, hand-drawn still images, each with its own in-frame animation, whether someone’s hair fluttering in the breeze, or the background gliding past outside a moving car.

It’s arresting but a little off-putting, especially when characters talk, their mouths remaining stubbornly closed. Within an hour or two it becomes part of the background and is for the most part barely noticeable, but you’ll still be brought up short in certain scenes or when picking up the controller after a break. It’s an interesting decision that’s often mildly distracting, but does at least draw a clear line between As Dusk Falls and traditional action games.

The other thing you’ll notice straight away is the extraordinarily high quality of the voice acting and writing. In a game that revolves around player choice, you can get the characters to do some pretty weird and dangerous stuff, and it’s a testament to both the script and actors that every single choice you make seems natural for the protagonists involved; quite a feat given the size and complexity of the story.

The game is also adept at creating tension. In many scenes you’re given impossible choices, forcing you to lie and dissemble to try and save your character’s family or divert potential violence. When those deceptions unravel you’re then forced to think on your feet to try and undo the damage you’ve inadvertently caused.

It makes for some truly edge-of-seat interactions, where even the choices that feel most intuitively right have dreadful unintended consequences, events unfolding realistically but frequently not at all in the way you would have liked. You will find yourself doing bad things to good people who absolutely don’t deserve it, because it’s the only way out. It makes for some fascinating dilemmas, almost always played out against the clock.

Although the director worked on Heavy Rain and Beyond: Two Souls this is much closer to the Life Is Strange series in terms of gameplay, the structure of the branching narrative, and the competence of the writing. It also has some similarities with Supermassive’s work on games like The Quarry, in that it has a prominent multiplayer element, where friends can join online or connect via mobile, with everyone voting for their preferred choices as scenes unfold.

It’s well executed and surprisingly engaging, prompting discussion, argument and eventually groans as your fervently defended course of action results in disaster, but is a great example of how a group of people can pick their way through a genre that until now has been largely solo.

The ambivalent characters, the secrets that lie just under the surface, and the relationships that may only reveal themselves after multiple playthroughs are all signs of a greater maturity than you’ll see in the majority of interactive entertainment. However, there are aspects of the game that don’t quite live up to their promise.

For example, the ‘personality insights’ you get at the end of each chapter mark you on your principles and ethics as well as your reflexes. It’s all positives though, like ‘tries to prevent harm to others’ or ‘cares for others and acts with empathy’, and the resistance to acknowledging any failings or cowardly duplicity on the player’s behalf creates a rare moment where the game feels patronising rather than adult.

In that end-of-chapter analysis you can also examine the complete plot tree. The options you chose are fleshed out in pictures subtitled by the percentage of other players who went the same way you did, while the road untravelled is shown as a skeleton, avoiding spoilers and encouraging multiple runs to see what might have been.

It’s an odd decision, then, to prevent you from skipping lines of dialogue you’ve already seen. It makes subsequent playthroughs unnecessarily drawn-out, forcing you to experience hours of chat you’re starting to know off by heart in search of the choices you haven’t yet made. Scenes still play out in a surprisingly wide range of different ways, up to and concluding the deaths of major characters, but getting there can feel like a chore, and each chapter resolves in relatively few potential end states.

There are QTE sequences, that do have fail states, but they’re not common and can be switched off if your trigger finger isn’t so fast. That’s another major advantage the game has over the Quantic Dream games, especially as you’re not forced to make fatuous joystick movements to perform menial jobs, from washing up to light carpentry, that have no bearing on the plot.

It may lack some of the long-term complexity of Telltale’s games, and the fully animated worlds of Heavy Rain or Beyond: Two Souls, but it’s far better and more compellingly written, and a lot more welcoming to non-gamers. From the wonderfully authentic characters who embody good as well as bad, to the execution of its multiplayer decision making, As Dusk Falls can be a captivating experience, and a promising first title from new developer, INTERIOR/NIGHT.