As a disabled person, playing video games has enhanced my quality of life 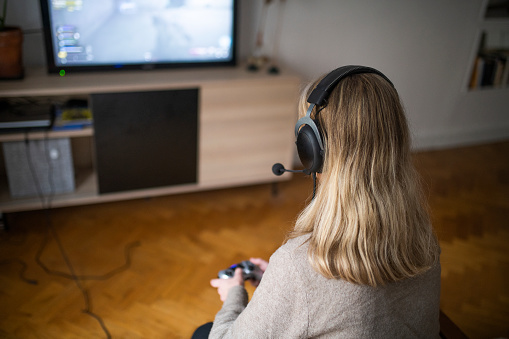 From a young age, I have found solace in playing video games.

They make me feel happy and are a great distraction from the daily pain that I live with. I was born with brittle bone syndrome, a condition that causes my bones to fracture very easily.

This means that my mobility is very limited. I use a wheelchair to move around, and I often worry about hurting myself in busy, everyday places, such as a supermarket, where someone could thoughtlessly knock or bump into me (this has happened before, on more than one occasion).

When I am unwell or housebound, I can slice through hours of the day by playing one game alone. I do need to take regular breaks when I play video games because it becomes painful to play and I tire myself out easily, but I have built up my play-time hours over the years.

My EA account shamefully tells me that I have accumulated 3,000 hours on The Sims 4, a very popular, life simulation game (just don’t cook too many grilled cheeses, or you will set your dream house on fire!).

As well as passing the time when I’m feeling ill, video games spark my imagination and bring me joy. Fast-paced games – such as first-person shooters – boost my adrenaline, which sometimes helps to alleviate my discomfort.

I grew up in the Nineties and as a child, I spent a considerable amount of time in hospital undergoing multiple operations and treatments. I was diagnosed with brittle bone syndrome at birth when, much to the shock and dismay of my parents, I came out with a broken arm, a broken shoulder and two broken legs.

Trips to the hospital have been a part of my routine since before I could talk.

Although whizzing through books and writing stories were my greatest joys while on the children’s ward, the medication affected how long I was able to read. It impacted my concentration; I felt tired, spaced out and nauseous. I would lose the sentence that I was reading, or it would take me a long time to process one word after the next.

Unable to focus on the words on the page, I often found myself counting the squares on the ceiling until I dozed off; or watching the same films on an endless loop – neither of which were very stimulating.

Then, when I was nine, I was introduced to video games for the first time. I remember my dad bringing along a bulky laptop and setting it up in the hospital so that I could play a brand-new game that would eventually become a cult classic: the Warcraft franchise.

Warcraft is a real-time strategy game that sees players collect resources, train individual units and heroes, and build bases to defeat enemy players, or AIs. Immersing myself in its fantasy world kept me occupied for hours.

The game would later be developed into a massive, multiple player online game known as World of Warcraft, which, surprise, surprise: I also became hooked on. Even celebrities such as Mila Kunis and Vin Diesel have been known to play it!

Azeroth is a fantasy world that exists within World of Warcraft. There are different continents to explore, a range of vastly different landscapes and cities to uncover. There is an entire virtual planet with a community of adventurers to play with. This opened up a whole new potential world of online friends for me, many of whom I have met in person and I’m still friends with to this day.

When I logged onto World of Warcraft I transformed – I was now a fierce elven character. I went by the name of Maev the Undying. Having this persona made me feel strong and powerful in a way that I didn’t feel as myself: a disabled, teenage girl on the internet.

As Charlotte, I wasn’t confident in myself, or my abilities. But as Maev, I could do anything.

To be clear: now that I’m older, I am proud of who I am. I know that I am very capable. I no longer need to hide behind a persona. But growing up, I treated video games like World of Warcraft as a crutch to lean on. I used them as a way of escaping from my everyday troubles and insecurities.

In Azeroth, I was no longer faced with the inaccurate stereotypes that come with being a disabled woman. No one pitied me or thought that I was not capable. In secondary school, I once had a teacher tell me that the only reason that I had been placed into the top set for an accelerated IT course was because I had a disability and the school needed to fulfil a quota.

I went from thinking that all my hard work had paid off to being absolutely devastated. To this day, I question whether I had earned that place on my own academic merit, or if I’d been the token disabled kid.

When I played World of Warcraft, anything was possible. I reached the highest level on the game, which meant that no part of Azeroth was ever off-limits to me. I could go anywhere.

Unlike the real world, I could navigate cobbled streets, climb to the top of the highest tower, or leap onto a rickety ship without a second thought. In fact, I often helped lower-level players reach their destinations safely.

My everyday troubles, which consisted of not being able to access a shop on the high street or being stared at by strangers, real feelings that first came alive as a child, melted away as I played.

I was on an equal playing field where I was able to showcase my gaming skills. Azeroth liberated and offered me comfort during difficult periods growing up. My confidence soared and I found a place where I felt completely included.

And throughout the pandemic, video games have been just as important as ever. I have needed to shield due to being clinically vulnerable. Like many of us, I have gone without seeing loved ones and been confined to the indoors. I live in a block of flats, so even a stroll around the communal gardens was not an option at one point. For a long time, each day bled into the next.

Gaming supported my mental health as it has meant that I was able to connect with friends, who I was unable to see in person, in a unique way.

I now have online friends all over the world and consider these connections central to relieving isolation.

I started playing when I was nine, and now, at 28, I no longer play World of Warcraft; my taste in video games has changed. I prefer Valorant (who doesn’t love Viper?), and CS:GO, which are both first-person shooters. However, I will always hold onto the memories and friendships that I made along the way.

Being able to play games with ease and the benefits that it has brought has made me recognise the importance of ensuring that all disabled gamers are able to do so as well.

Every disabled gamer will have different access needs and many popular titles remain inaccessible. But if KFC can create a console that cooks chicken while gaming, there is no excuse for not developing accessible games. Accessibility should be an industry standard. After all, in the UK alone, over a million people have a disability, and research from Muscular Dystrophy UK found that one-in-three gamers has been forced to stop playing due to their disability.

On the bright side, companies such as Microsoft have launched a testing platform to help developers make their games more accessible. Also, SpecialEffect, a charity in the UK, does some great work in levelling the playing field for disabled gamers and bringing the magic of gaming within reach through technology that helps people control their playing time.

I truly believe that video games can offer a gateway to an incredible, immersive experience that every gamer should be able to access.

Video games have certainly enhanced my quality of life. They have brought me many hours of fun, laughter, and happiness, which every person deserves to have.

When I am having a bad day, they offer me some release from my troubles. Video games are an outlet for burning off steam and feeling content.

If I hadn’t been introduced to them by my dad all those years ago, I think those trips to the hospital would have been a lot harder.