Elevate your enterprise data technology and strategy at Transform 2021.

Verbit today announced the close of a $157 million series D round that the company says will bolster its product R&D and hiring efforts. CEO Tom Livne, who noted that the raise brings the company’s post-money valuation to more than $1 billion, said that the capital will also support the company’s geographic expansion as it prepares for an initial public offering.

The voice and speech recognition tech market is anticipated to be worth $31.82 billion by 2025, driven by new applications in the banking, health care, and automotive industries. In fact, it’s estimated that one in five people in the U.S. interact with a smart speaker on a daily basis and that the share of Google searches conducted by voice in the country recently surpassed 30%.

Livne, who cofounded Verbit.ai with Eric Shellef and Kobi Ben Tzvi in 2017, asserts the New York-based startup will contribute substantially to the voice transcription segment’s rise. “The transcription market has been ripe for innovation. That’s the initial reason why I founded Verbit. The shift to remote work and accelerated digitization amid the pandemic has been a major catalyst … and has further driven Verbit’s already-rapid development,” Livne said in a press release. “Securing this new funding is yet another milestone that brings us closer to becoming a public company, which will further fuel our expansion through strategic acquisitions and investments.”

Verbit customers first upload audio or video files to a dashboard for AI-guided processing. Then a team of over 33,000 human freelancers in over 120 countries edits and reviews the material, taking into account customer-supplied notes and guidelines. Finished transcriptions from Verbit are available for export to services like Blackboard, Vimeo, YouTube, Canvas, and BrightCode. A web frontend shows the progress of jobs and lets users edit and share files or define the access permissions for each, as well as adding inline comments, requesting reviews, or viewing usage reports. 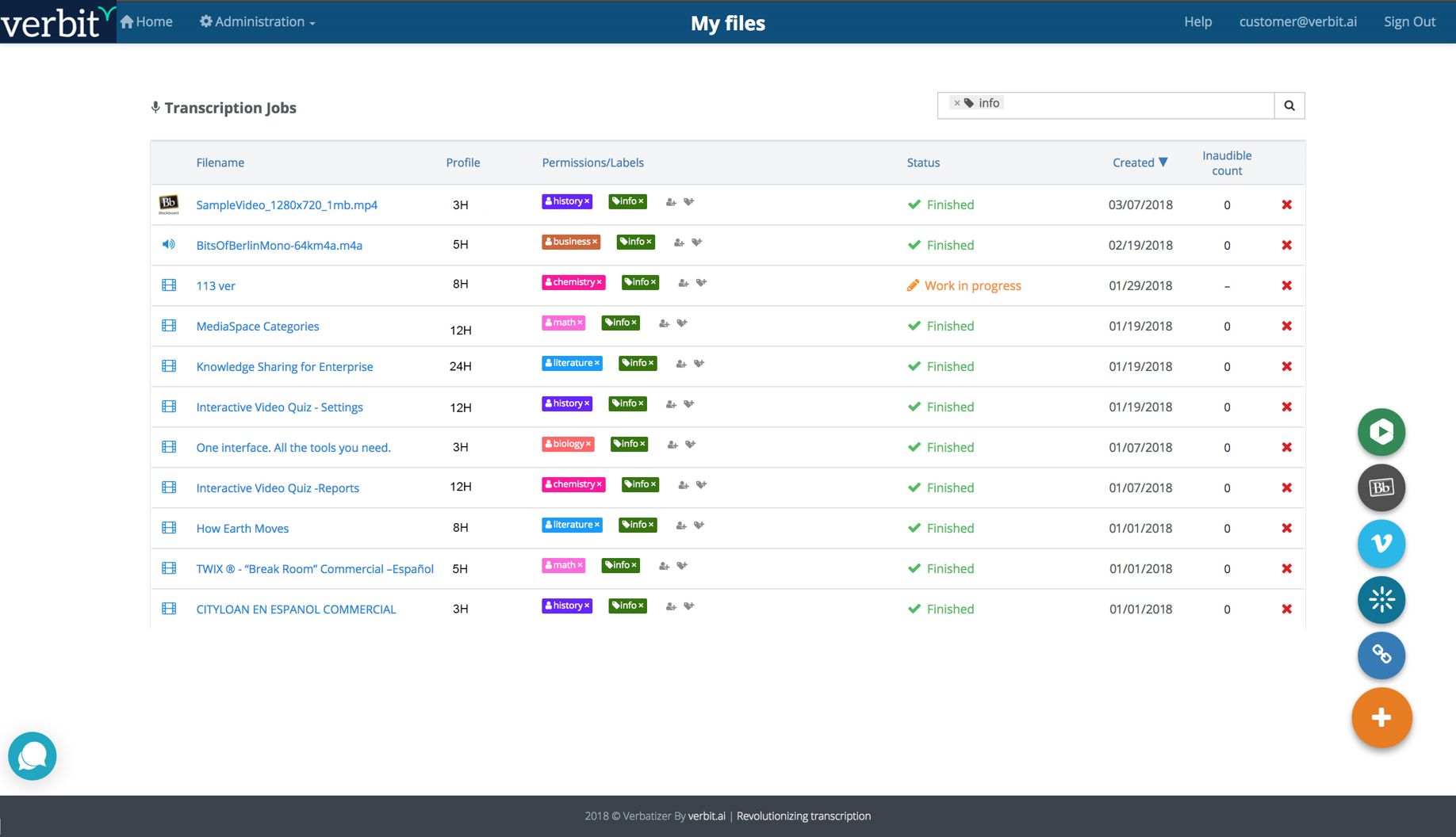 Customer have to make a minimum commitment of $10,000, a pricing structure that apparently paid dividends. Annual recurring revenue grew six times from 2020 despite pandemic-related headwinds, according to Livne, and it now stands at close to $100 million.

Verbit’s suite has wooed a healthy client base of over 400 educational institutions and commercial customers (up from 70 as of January 2019), including Harvard, the NCAA, London Business School, and Stanford. Following its recent acquisition of captioning provider VITAC, Verbit claims it’s the the “number one player” in the professional transcription and captioning market, supporting more than 1,500 customers across the legal, media, education, government, and corporate sectors including CNBC, CNN, and Fox.

Verbit plans to add 200 new business and product roles and explore verticals in the insurance and financial sectors, as well as media and medical use cases. To this end, it recently launched a human-in-the-loop transcription service for media firms with a delay of only a few seconds. And the company inked an agreement with the nonprofit Speech to Text Institute to invest in court reporting and legal transcription technologies.