ADACA Is A Must For Half-Life Fans

Being a Half-Life fan is a lot like going through the five stages of grief on a loop. It starts with denial – there’s no way it’s over. Half-Life: Alyx isn’t it! We will see Gordon again. Then comes anger. Where’s 3? Scrambling to internet forums to voice frustration at a cliffhanger left lingering for over a decade, now stuck with a new ending. And bargaining – we make our own games and our own indies inspired by it. Black Mesa and Codename: Loop continues its world while Industria and now ADACA take its lessons to make new ones. That’s where we are, and I plan to stay here for as long as possible before I reluctantly hit acceptance again and finally say – definitely for the last time – “It is what it is, the next game will come when it comes… if it comes.”

We’re bargaining with ourselves, desperate to cling to the magic of Half-Life that is being drip-fed to us through a leaky faucet. ADACA thankfully helped with the drought. It takes a lot from Half-Life to make its own dystopia – Combine and Metrocops are swapped out for police, headcrab zombies and other body horror creations are brought to life with malfunctioning cyborgs and robots, and the resistance is the resistance. It’s got all the familiar elements including, most importantly, the floaty movement and fast-paced gunplay.

There’s even a segment that reminded me of an early Half-Life 2 level where you’re on the run after leaving Kleiner's lab. You hop on the top of a train to reach a ladder before a Combine force wall smacks you in the face. Only here, the train carries you across a bridge past some rundown abandoned houses where the police have stationed themselves to pick off rebels. You can stay on top and ride it to the end or you can hop off and loot the buildings while picking a fight with these trigger-happy authoritarians. It has the gunplay down, but that wouldn't matter if it didn’t come with the loop of murdering fascists. Thankfully, we get to do just that, and pretty much only that. 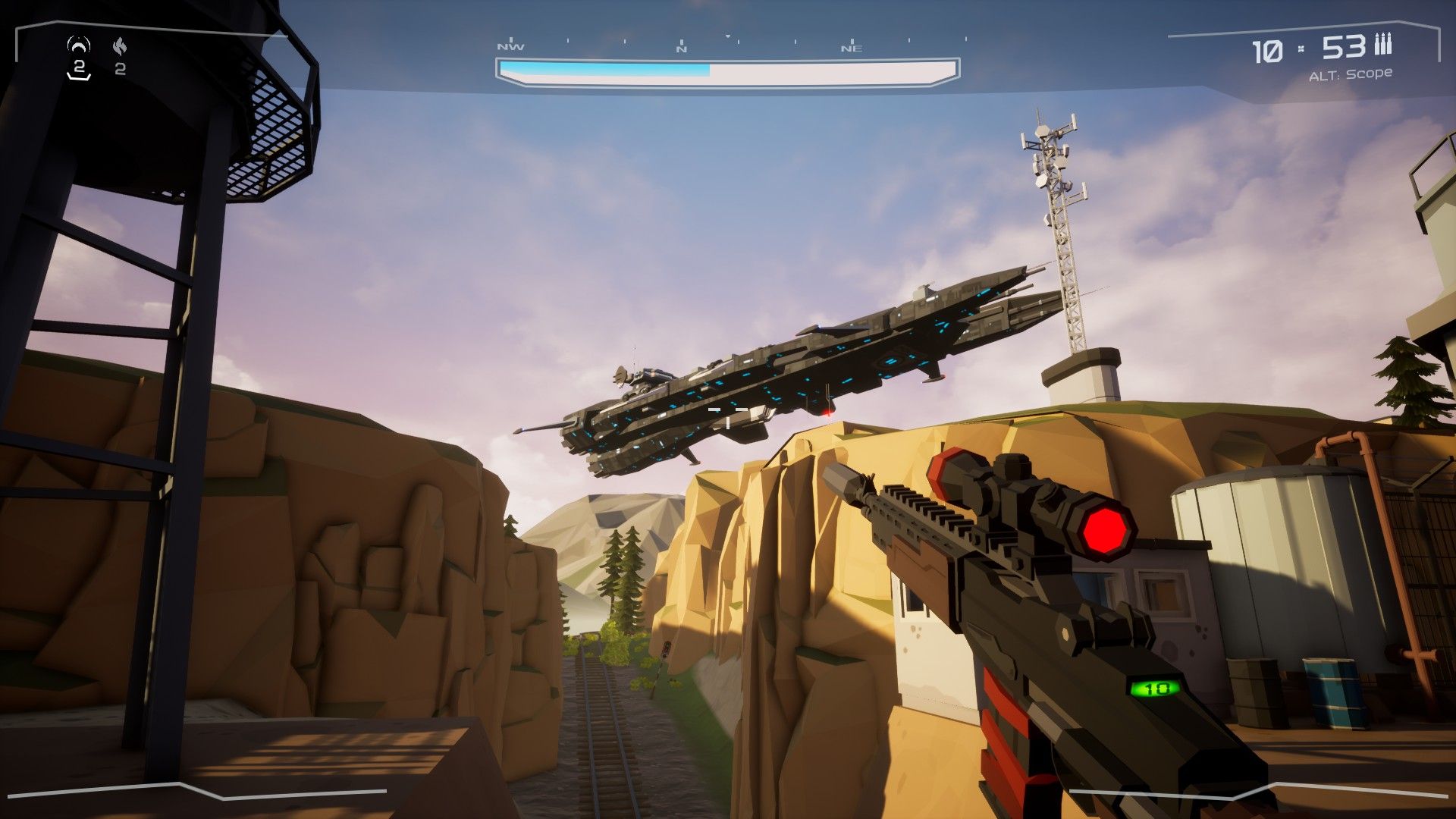 The train is an important note and not just because of its shiny keys that remind me of better days when I was a kid running home from school to explore the underbelly of an abandoned bridge full of Combine scouts and barnacles. It’s important because what made Half-Life so special was its memorable set pieces. Whether you were staging a breakout at a prison, tearing down propaganda broadcasts in the town centre, or scurrying across rooftops as cops shot at you from below, every single segment was rich with personality. ADACA is no different.

The best example of this is the waterside industrial town you find around the midpoint of the game. It has an Old West feel, home to the vagabond rebels that are holding out until the inevitable next attack. We signal it. It feels part Dishonored hub and part Sandtraps with the Lighthouse stand-off. Dropships bring in the foot soldiers while firing off at us, meaning we spend time in cover indoors while the next batch of cops is sent in to wipe us out. But we’re (not) Gordon Freeman, so it’s an easy task taking them on.

ADACA isn’t a wholly original game, leaning heavily into its inspirations without shame, but there’s no harm in that. Half-Life games are few and far between, either being relics of the ‘00s and ‘90s or strapped to expensive VR tech, so it’s nice to have fan-made indies that carry the torch. And not only do they carry it, but they bring a whole new spark to its flame.