Escaping the Inquisition in A Plague Tale: Innocence seems like a walk in the park compared to the dangers Amicia and Hugo face in A Plague Tale: Requiem. Whether it’s rats, the Order, or the Count’s soldiers, there’s evil around every corner in this dreary world.

After narrowly escaping the assault on the river, the de Rune siblings embark on their own, trying to find the mysterious island that Hugo dreams about. Unfortunately, the pair are quickly spotted by more soldiers. With the help of Hugo’s new ability to control the rats, they make another miraculous escape thanks to an unlikely ally. 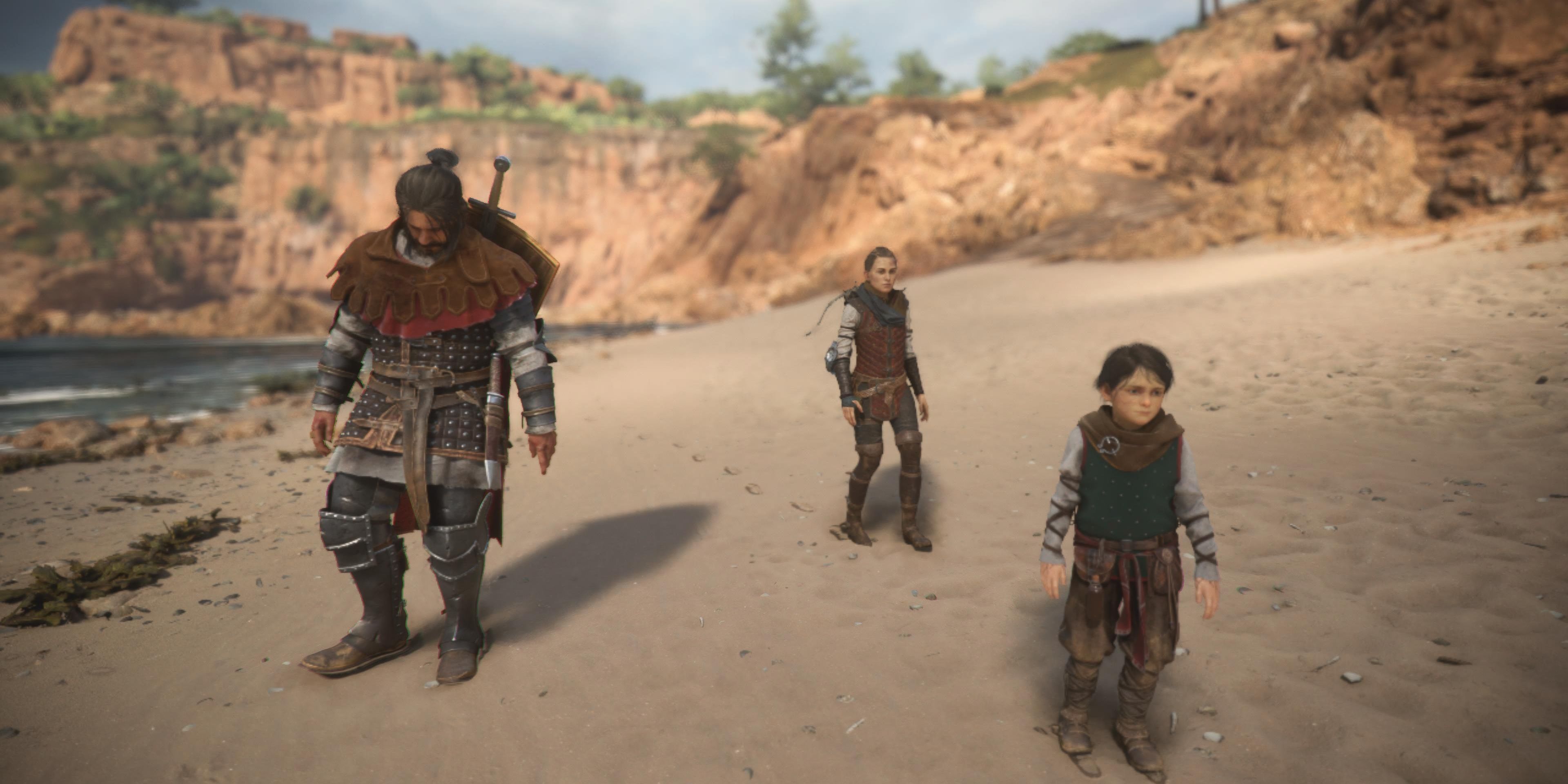 Thinking she was going to become the rats’ next meal after lifting Hugo to safety, Amicia wakes up against a tree and finds out that Arnaud was the one who rescued her. If you don’t remember, Arnaud was the one who bashed Amicia on the side of the head in chapter five. After Arnaud explains his reasons why he's agreed to align himself with his former adversary, it's time to find a boat.

Follow Hugo up the rocky path but don’t miss the Pieces off the side to the right. Continue heading up the path and follow Hugo to the edge of the cliff. Arnaud tells them he knows a smuggler who can get them a boat to sail to Hugo’s island. Run across the beach and investigate the shed to the left. Open the door, find a knife on the seat, and leap out the window. There’s a chest with Alcohol on the side, then continue up the path to find a Black Headed Gull feather to add to Hugo’s collection.

Using Imperium will increase Hugo’s stress level – it's dangerous to overuse the ability.

Exit the shed and interact with the rope to pull the boat out of the rock opening. A small horde of rats will emerge from underneath but we can use Hugo’s Imperium as another way to remove the rats. Use your sling to knock down the fish from the shed, then control the rats to eat the fish. With the rats removed, crawl behind the boat into the caves. Climb up the ledge and search the chest to find Alcohol and Sulphur, then shoot an Ignifer bolt at the wooden board beneath you to clear the rats.

Getting Through The Rat Infested Cave

Drop from the ledge and search the chest to find Alcohol and Resin, then light the torch and use an Ignifer pot to clear the rats so you can reach the other ledge. Before climbing the second ledge, turn left to find a chest with Alcohol and Sulphur. Head up the second ledge to grab a stick so you can make your way through the rats to the next torch. Keep walking down the path and open another chest to the right, then interact with the rope to pull the cart carrying the brazier.

Light the brazier to create a path through the rats with the cart. When you reach the end of the path, Amicia and Hugo will walk against the wall but the ledge will break with the weight of Arnaud. The rats will eat Arnaud unless you light the torch before the timer runs out. Open the chest nearby to find Pieces, Saltpeter, Alcohol, and Sulphur. Hugo notices yellow crystals behind Arnaud called Episanguis.

Mix Episanguis with Saltpeter to create Odoris, which creates a high-potent smell that will attract the rats at the point of impact. Aim the sling with the Odoris a few feet in front of Arnaud and the rats will instantly scurry to the spot, allowing Arnaud to run up the side platform. Have Arnaud use the crank to lift a wooden board to shoot a bolt with Odoris on it. Release the crank and the rats will swarm the board, allowing Arnaud to return to Amicia and Hugo.

If you run out of bolts, more will spawn on a barrel next to the chest where you found the alchemical ingredients. 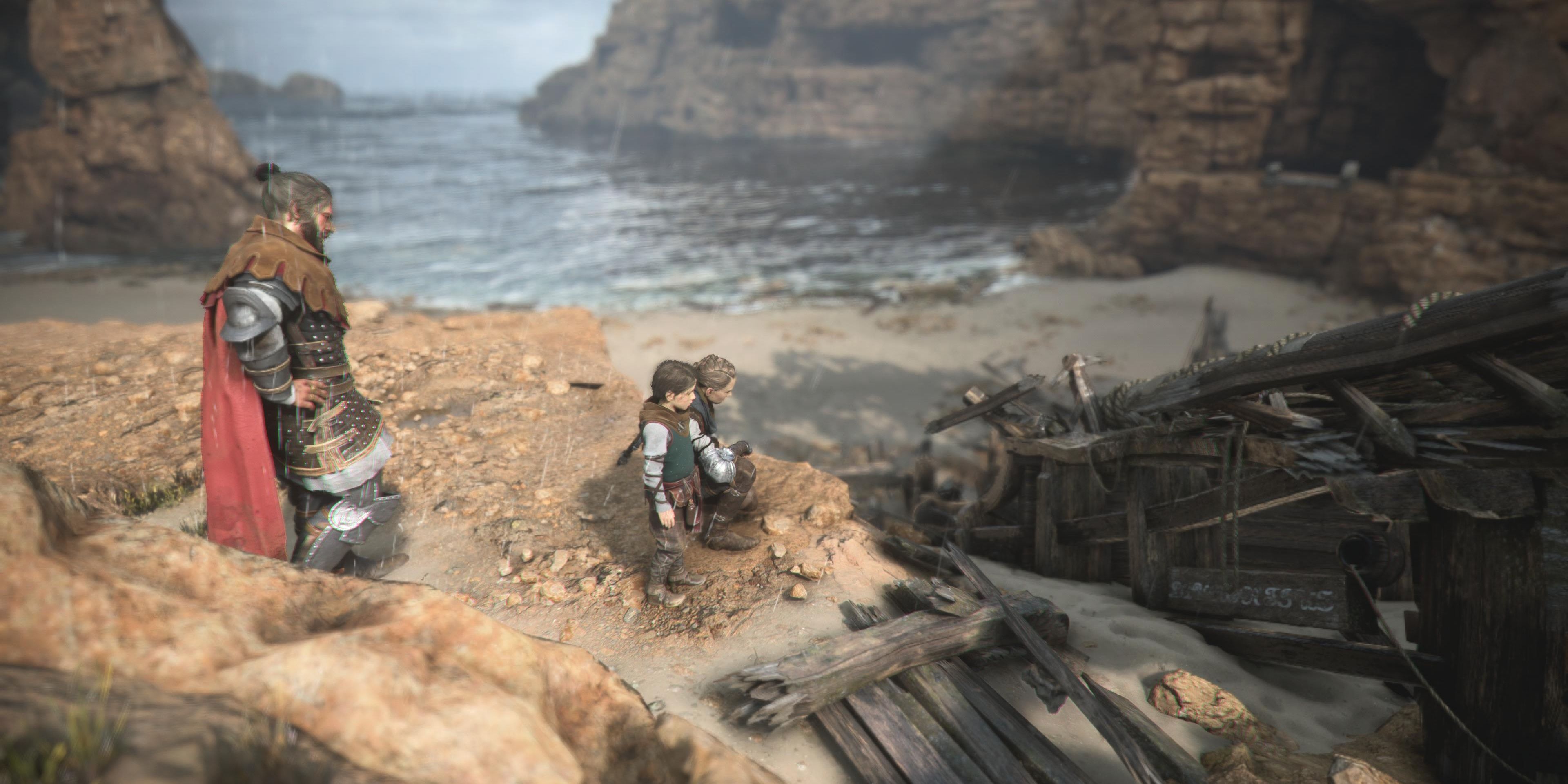 There’s a tunnel to the left but it’s infested with rats. Arnaud suggests firing an Ignifer bolt into his shield and clearing a path through the rats. Drop down the ledge on the other side and use the workbench on the left. After upgrading your equipment, walk a few feet forward and make a sharp left to climb up the ledge. Head down the path and you’ll find The Survivor souvenir.

Run ahead across the water and light the brazier in the distance. You can either use an Ignifer pot or Hugo’s Imperium to clear the rats to continue moving forward. Open the chest to find Alcohol, Sulphur, and Espisanguis. Light the brazier to collect the resources in the area but act quickly because the brazier won’t stay lit forever. Light a stick at the next brazier and head into the belly of the ship. Reach the torch and you’ll hear soldiers patrolling the area. In the back of this area, you can find a chest and Pyrite, then another chest in the ceiling by climbing the cart.

Make sure you’re crafting alchemical ammo as you go along, and try to use as many resources as possible so you aren’t leaving anything behind.

Drop back down from the broken roof and use Exstinguis on the passing guards to snuff out their torches for the rats to kill them. Pick up the torch from the handle and walk through the rats to the left. Place the torch in the next handle and light the nearby brazier. There’s a guard on the opposite ridge that might spot you, so use Exstinguis to allow the rats to get him. Get the torch again and walk to the left wall to open a chest, then grab the rope to pull the wooden box. Use an Odoris bolt to attract the horde of rats so you can proceed forward. 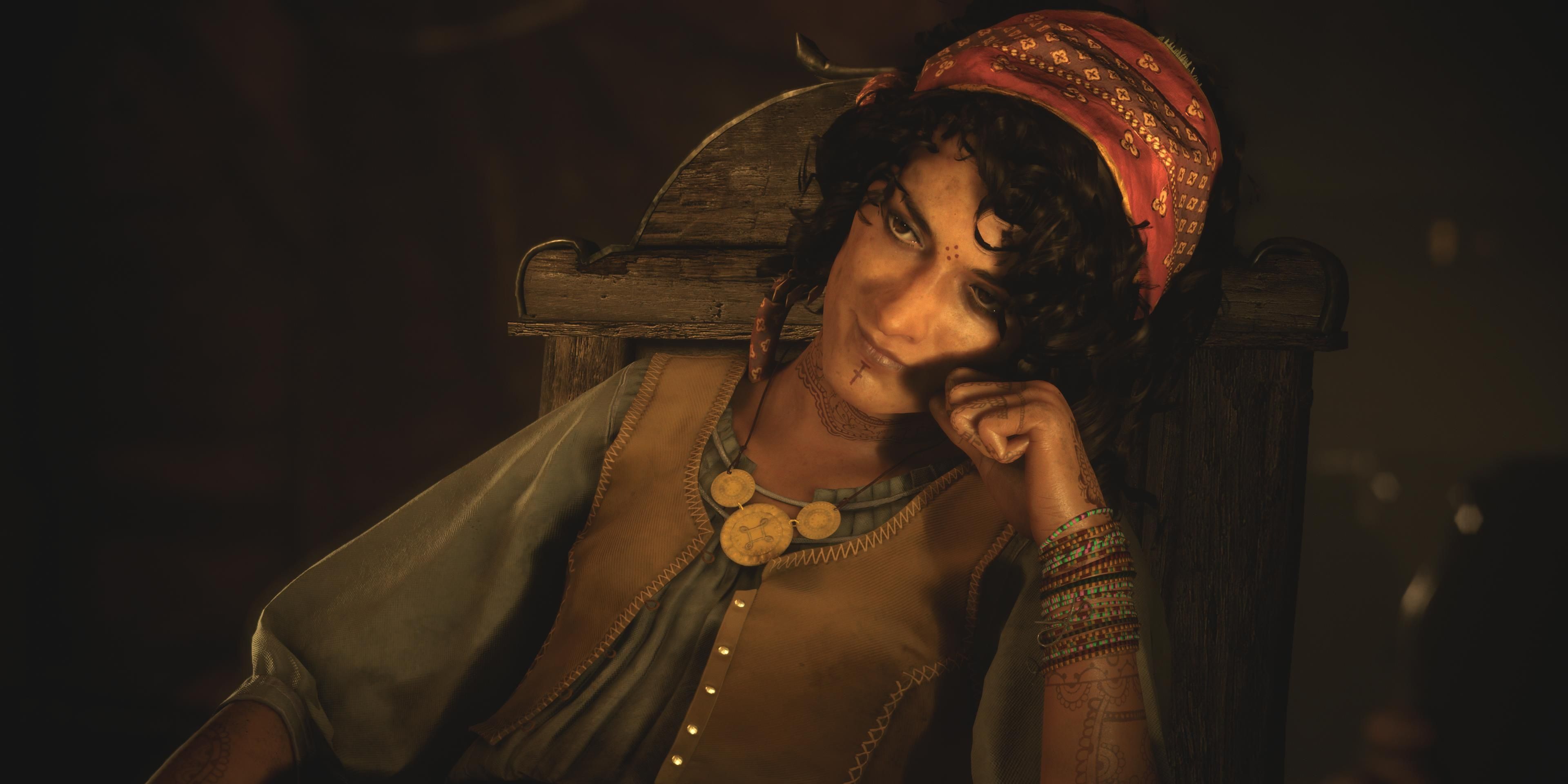 When you climb up the ledge, there will be another horde of rats blocking the path. Hit the side wall with Odoris to distract the rats and sprint across the bridge to the light. Use an Ignifer pot to remove the last of the rats to reach the brazier. Fire an Odoris bolt in the wooden box to drop from the ledge and head toward the torch to find a narrow passage. Before you interact with it, go through the opening on the side of the ship to find a locked workbench. Once you’ve upgraded your equipment, make your way through the passage to reach Sophia, the Sea Scorpion. 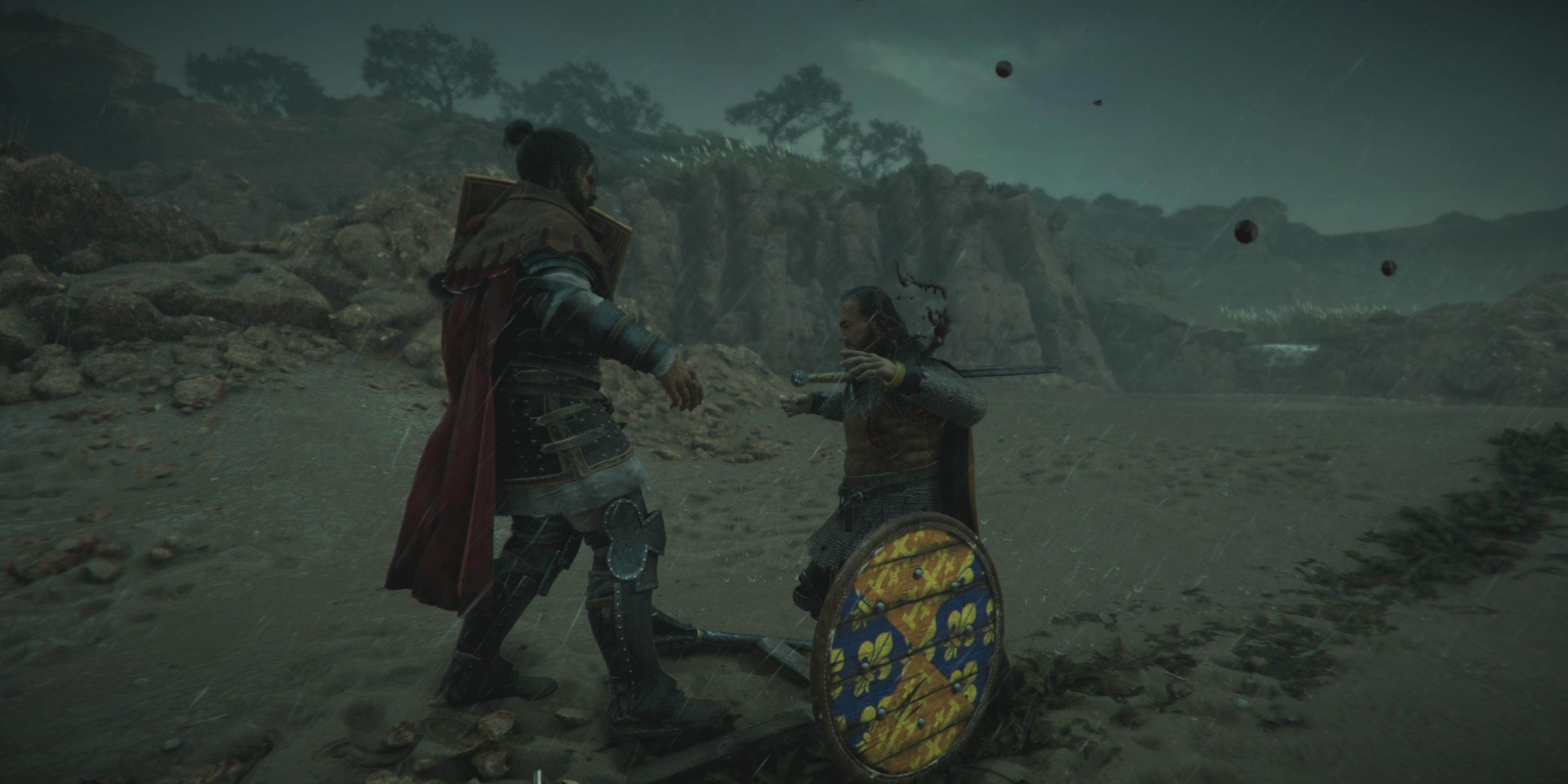 Sophia agrees to ferry the de Rune siblings to La Cuna and instructs Amicia, Hugo, and Arnaud to leave her hideout to meet her at her ship. The group is spotted by a guard but Arnaud kills him, unlocking his companion ability. Amicia can command Arnaud to attack guards but if he’s overwhelmed he could die. The noise of combat can also attract nearby enemies, so always remain alert to help Arnaud by stunning enemies with a rock flung from Amicia's sling if other soldiers arrive.

Continue moving along the beach and open the chest near the water, then climb the ledge to find another guard patrolling the path. Snuff out his flame with Estinguis, then use Hugo’s Imperium. You can keep using the rats to target other guards but be mindful of Hugo’s stress level. Approach the patch of land in the water to pull the rowboat toward you and find a chest with a Tool, Pieces, Sulphur, and Saltpeter. Keep running up the coast until you see a small opening to the left. Climb the ledge and command Arnaud to attack the armored guard. Help Arnaud by killing the other guard with a bolt, then drop down the ledge to the right and eliminate the remaining guards patrolling the beach.

If you use Ignifer and Arnaud is caught in the blast, he won’t try to leave the fiery area. You need to use Exstinguis to snuff out the flames around him so he can escape safely. 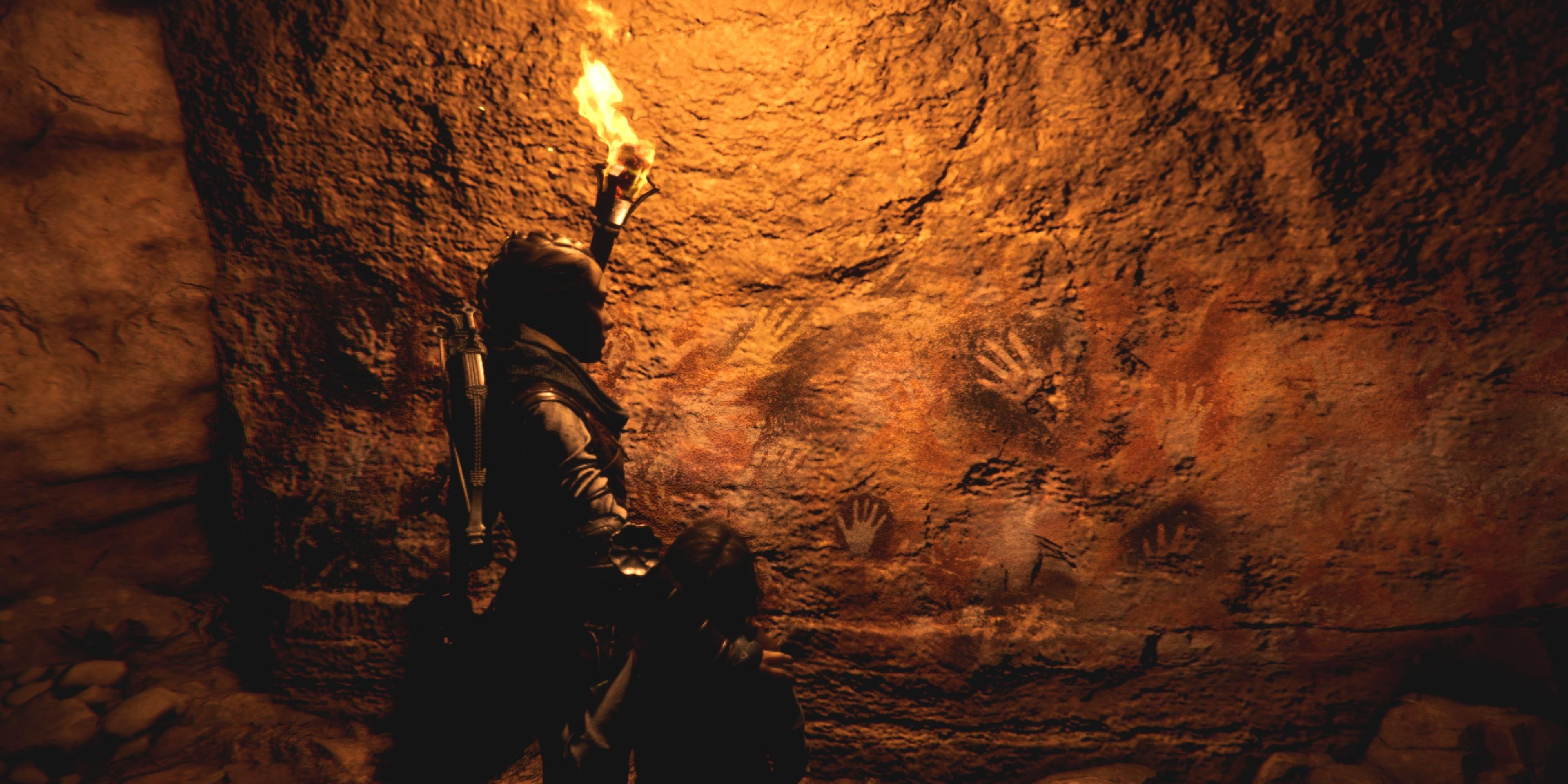 Hop up the next ledge and squeeze through the narrow passage. Before you head down the slope, climb up the ledge and crawl under the rock and grab the torch on the wall. Walk into the darkness and you’ll find The First Men souvenir. Return to the beach and you’ll reach a small fishing village. Eliminate the guards and walk up the steps of the nearest home. Open the chest to find Resin and Alcohol, then continue navigating through the village, using Arnaud to kill guards. 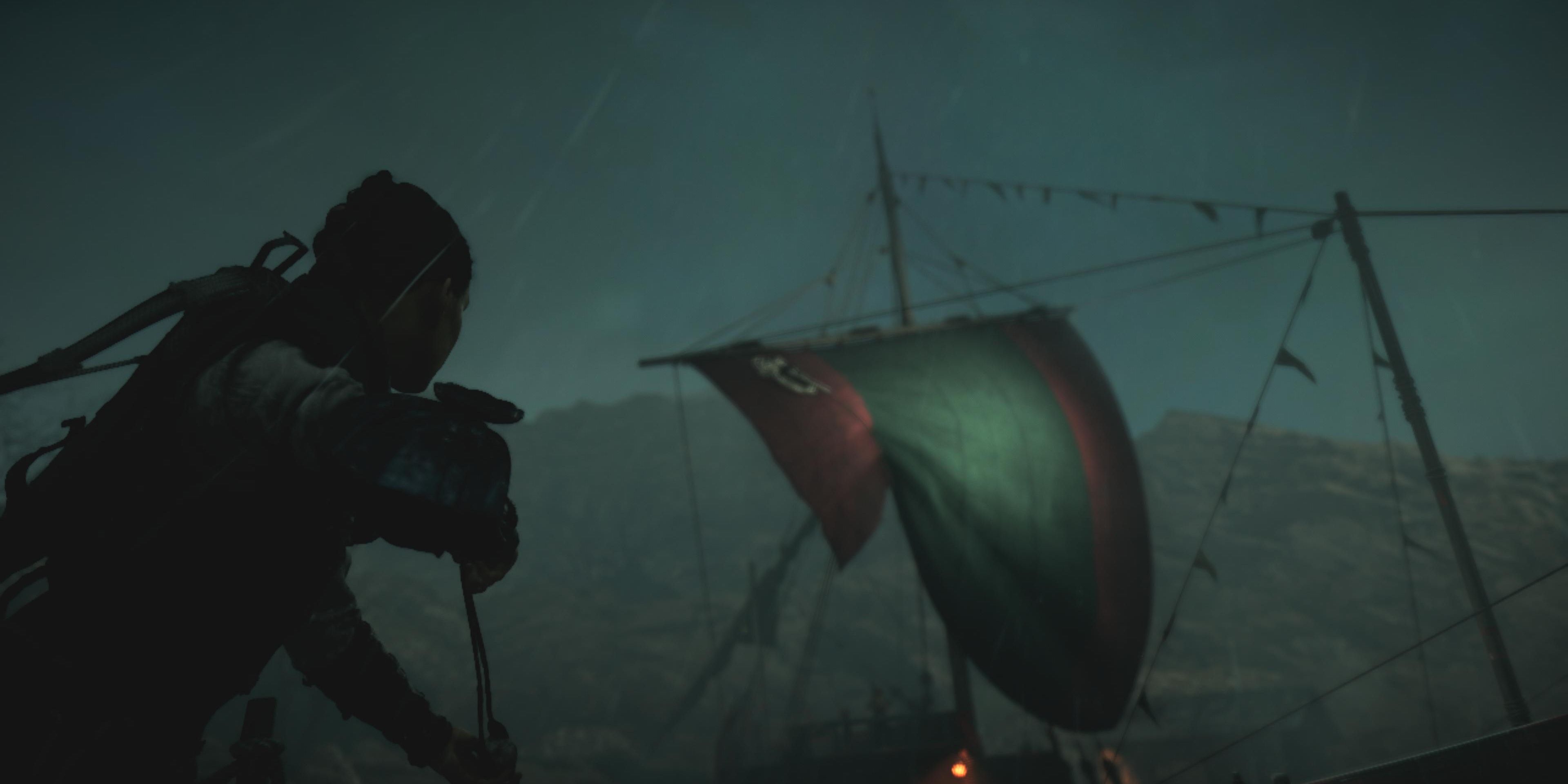 After passing through the wooden spiked fence, there’s a chest to the left with Alcohol. Continue following the path to the next section of the village and there will be a fully armored guard. Assist Arnaud in defeating him, then run up the steps to safely enter the house. After a brief cutscene, complete the quick-time event and hop out the window and open the nearby chest for Resin.

Walk down the bridge to the ship and help Arnaud lift the anchor by turning the center crank. Unfortunately, the crank gets stuck halfway through. Head to the ladder on the other side of the ship where a horde of rats prevents you from climbing down. Use a pot of Odoris to lure the rats away from the ladder or use your Sling to break the latch on the other side to open the trapdoor and break the latch on the fish hanging above. On the opposite side, head to the end of the pier to have Arnaud use the crank to raise another latch for Amicia to break which will unblock the anchor.

Return to the ship to finish pulling up the anchor. Next, head to the starboard side of the ship to help Arnaud raise the sails. Predictably, it gets stuck. Run down the far end of the dock and use your Sling to break the latch on the sail to release the boat and finally set sail for La Cuna.