Madison is a nerve-shattering experience from Argentinean-based studio Bloodious Games. It’s a game that humbly wears it's P.T. and Visage inspirations with grizzly pride, yet manages to stand out as a strong horror game on its own. A narrative dripping in sinister themes, smart uses of a camera mechanic and a terrifying third act firmly cements Madison in the first-person indie horror hall of fame.

You play as Luca, a teenager who appears to be having a nightmare of a day. Pictures of severed limbs lie at his feet and an enraged father is banging on a locked door, trying to get to you. You pass through a gap in the wall and emerge at Luca’s Grandpa’s house where you learn that Luca is undergoing an unpleasant possession. You’ll find a camera with Luca’s name on it and begin to get entangled in a dark story. A story that is punctuated by some seriously scary moments. 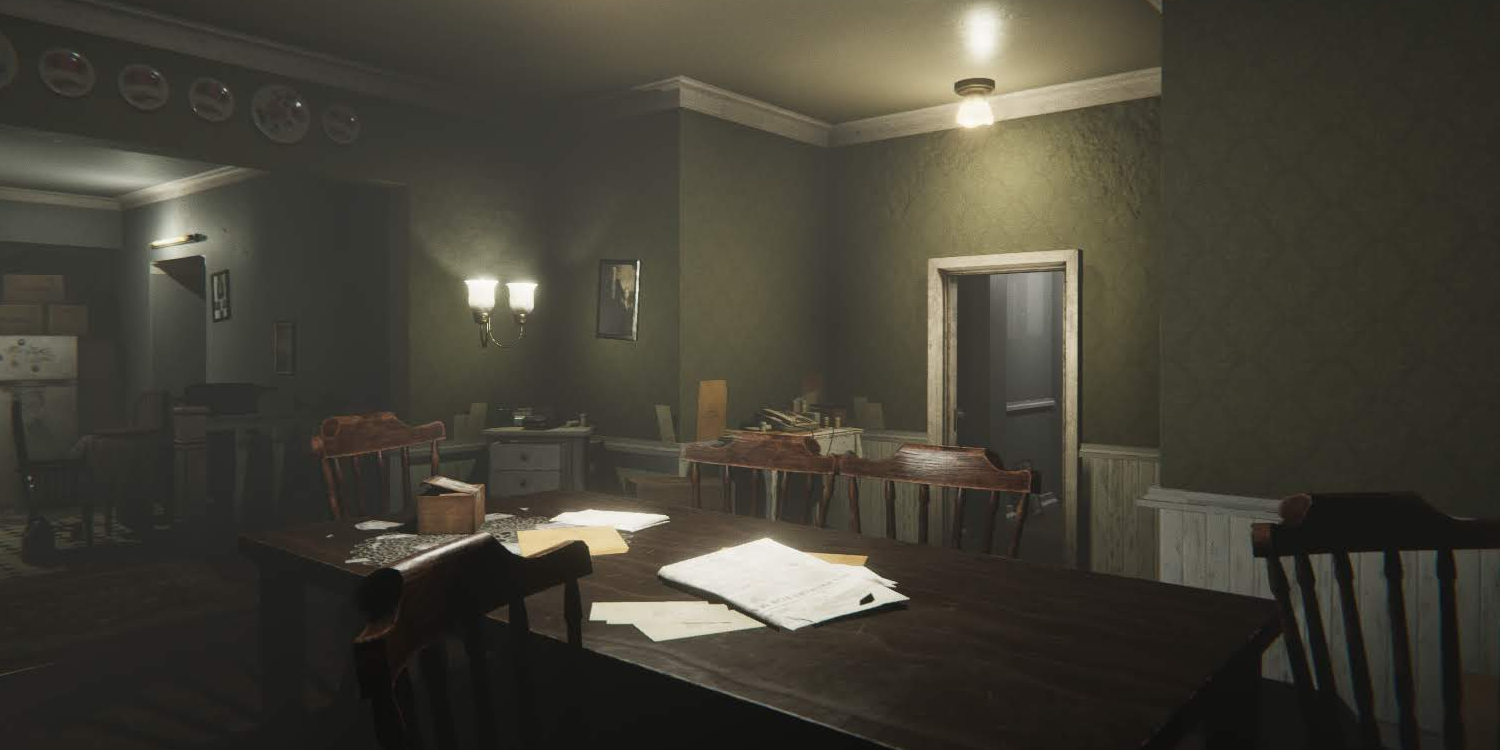 Grandpa’s house is the location you’ll spend most of your time in. At first, it's your standard horror location affair – a great big house full of rooms. But it’s the familiar meets the unfamiliar that makes this location horrifyingly memorable. Stepping into each room will always bag you a surprise as most of the time everything feels off.

Exploration is perforated with suspenseful noisy ambiance in the form of creaks and distant movements. You can never be sure that hearing a door opening is real or the effects of Luca slowly becoming more possessed. Bloodious Games knew we’d spend a lot of our time here, and they have made it a chilling house to search. 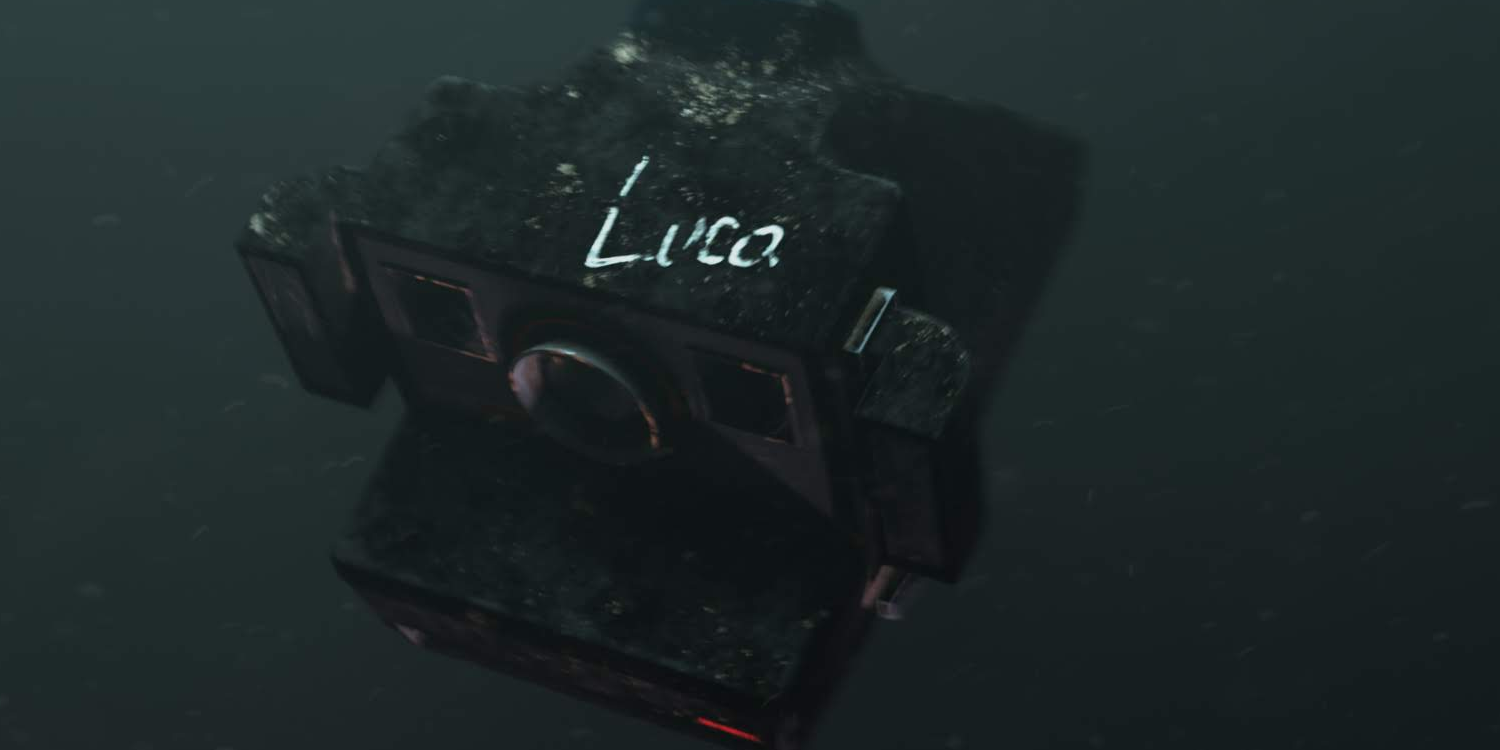 A camera in a horror game is certainly nothing new. Games like Fatal Frame have built a whole series around a camera mechanic, and to great effect. Yet, whenever we are given one and prompted to use it, a certain dread begins to ensue. Madison takes that dread to dial up the scares to eleven.

The camera, a vintage Polaroid, feels weighty to use, and you never know when the next flash might reveal a nasty jump scare. Every photo you take needs to be waved in the air to develop it. And in the sequences where the camera is used to stave off a certain foe, this mechanic opens you up to instant death. So you better make every snapshot count! 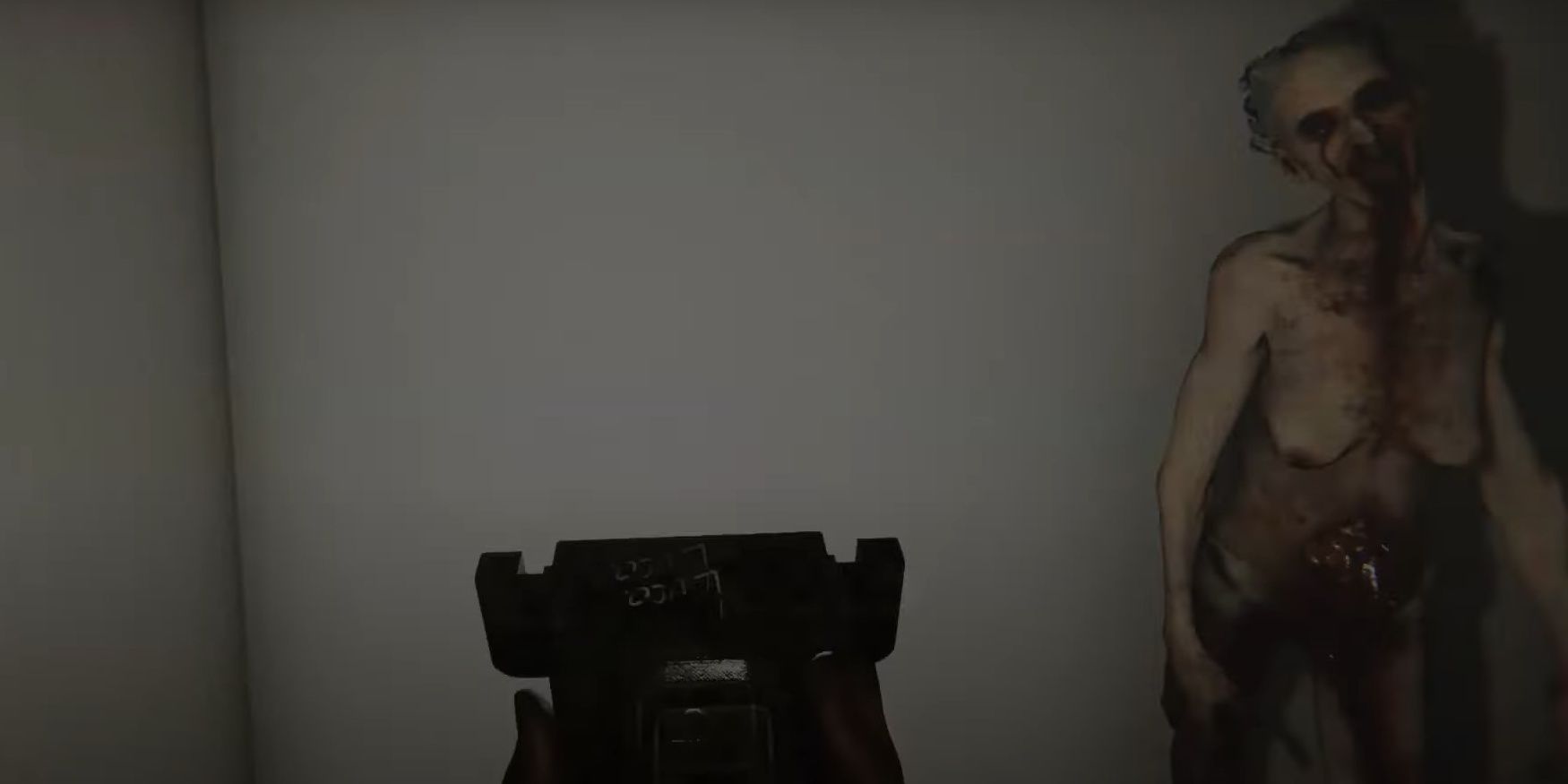 This titular lady is a deceased serial killer who is trying desperately to possess Luca. And she does a very good job in getting you to set up this possession ritual whilst making sure you are utterly terrified in the process.

Bloodious has cleverly implanted a mechanic whereby Madison, and a few other paranormal things, can happen at random. The familiarity of walking to and from the house is disturbed by Madison either standing in a doorway or running at you full pelt. And it’ll always catch you off guard. You’ll be holding your breath as you turn every corner in preparation for that sweet, sweet jump scare. 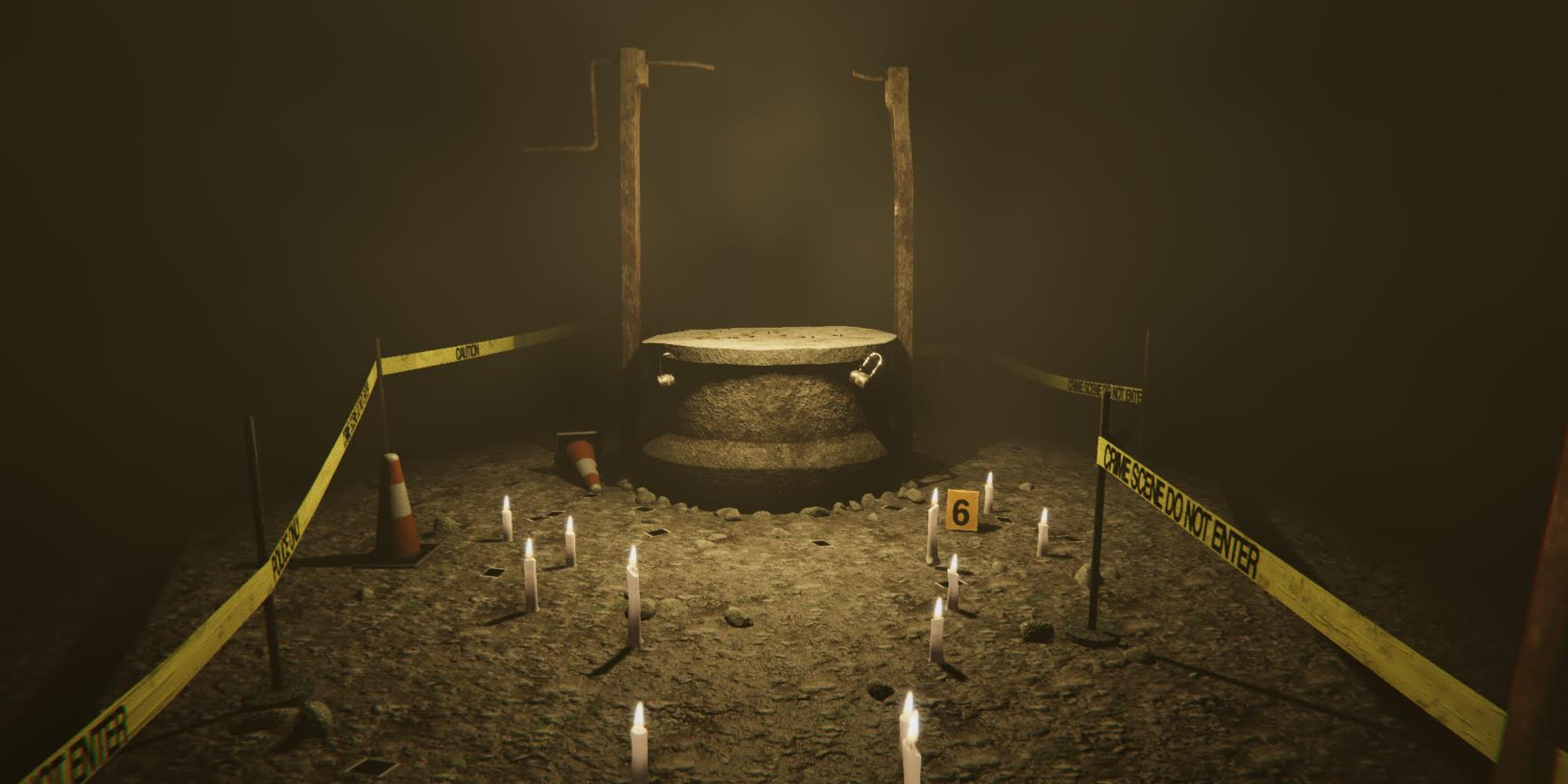 Sometimes certain rooms will take you away from the house altogether. These pocket dimension locations mainly serve to drip-feed more of the overall plot and shake things up. The well is the first time this happens and the sequence that follows is horror gaming fine wine.

You’ll be standing in a submerged underground area and find a walkie-talkie. You’ll deduce from it that every time the little red-light flickers, you need to take a picture. And it’s the flashes from the camera that reveals Madison skulking around you. Catching Madison out of the corner of your flashes is anxiety-inducing. You’ll just want to keep snapping that camera to keep your eyes on her. The entire sequence fuses narrative delivery and effective scares well, and you’ll be begging for it to be over for all the right reasons. 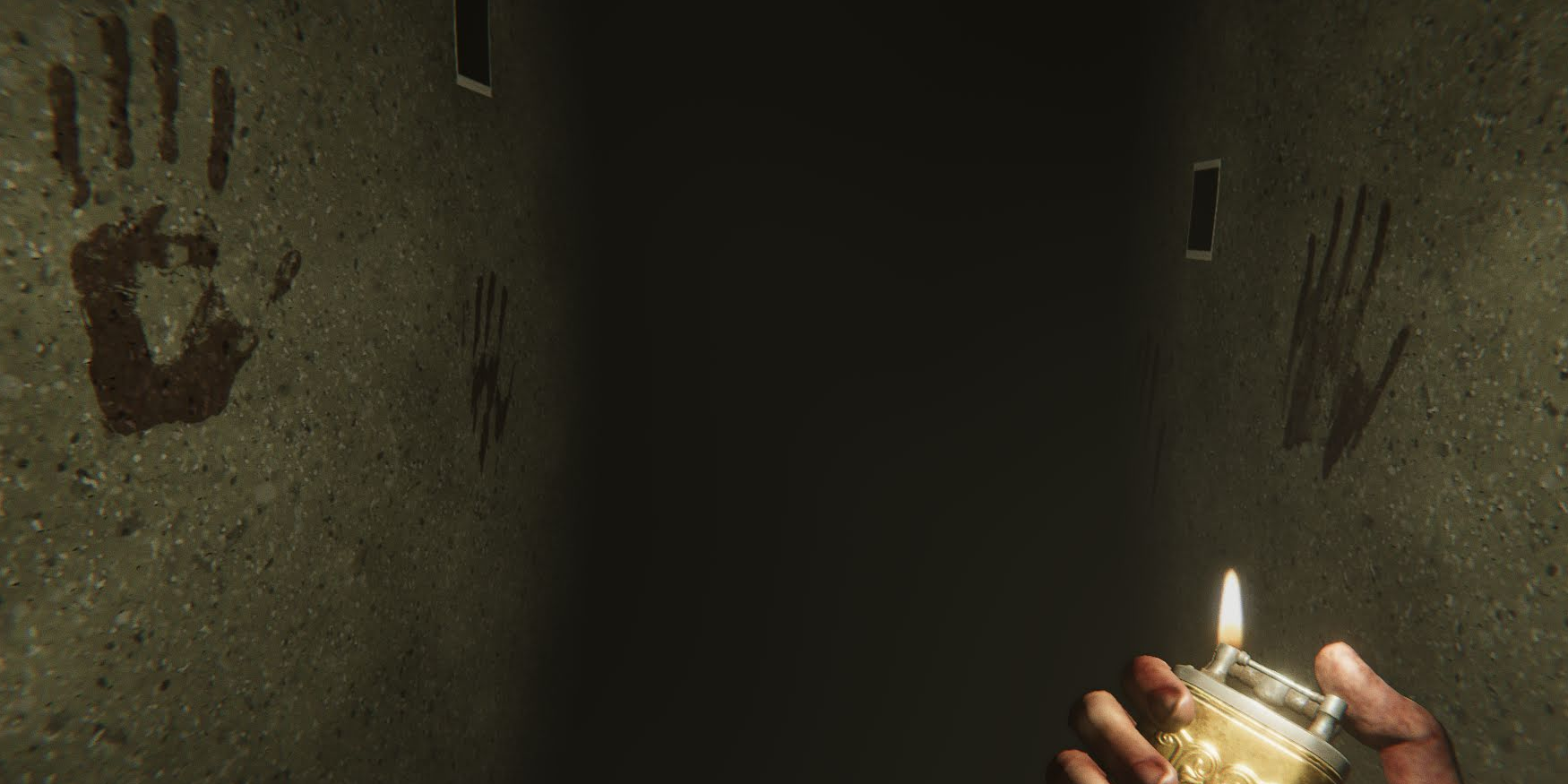 Hidden at the back of the attic is a long, dark and otherworldly corridor. It's so dark, that you’re given a lighter to navigate your way. However, this devious little device will turn itself off occasionally – just the thing you don’t want to happen when you realize Madison is also in the corridors.

The moments where Madison's obscene face is nose to nose with yours every time you must spark up the lighter is enough to make you hit that pause button for a breather. The corridor is a maze that doesn’t overstay its welcome, but you’ll spend most of the time with your eyes on the ground, just to escape the leering face of Madison. 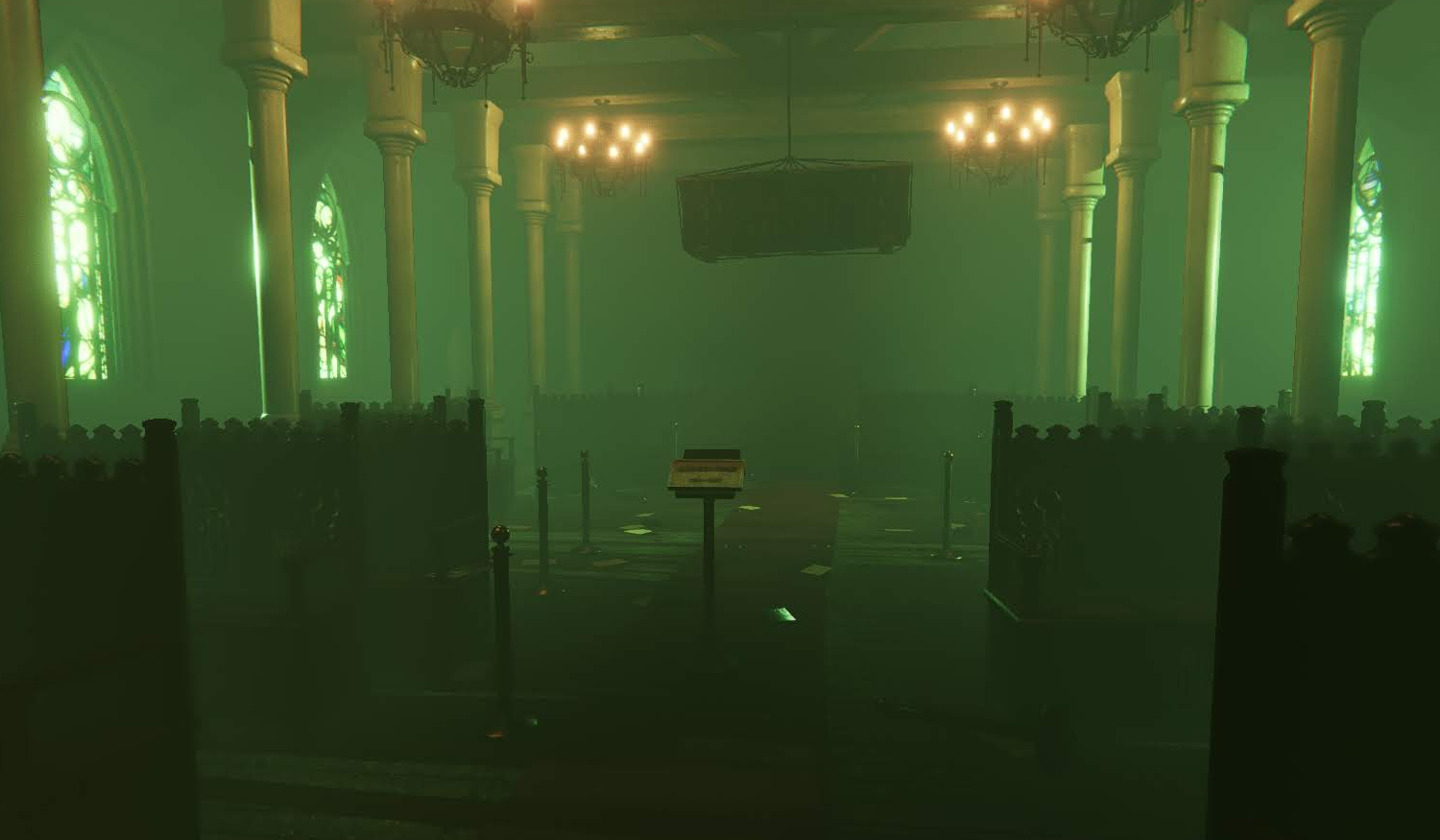 The Cathedral is the second area offshore from the main house. Although it doesn’t offer a platter of jump scare moments, it's the environment itself that is eerie. And that is in no small part because of its size and the inclusion of multiple art gallery mazes.

The main church space can be visited between three time periods with a snap of the camera. You experience the different levels of disarray the church succumbs to over the years, but one thing remains the same – the church is massive. This vapid area is unnerving and a surprising amount of suspense builds from just how quiet it all feels. And then there are the art gallery mazes that are both unusual and creepy to navigate – offering a slower burn horror moment. 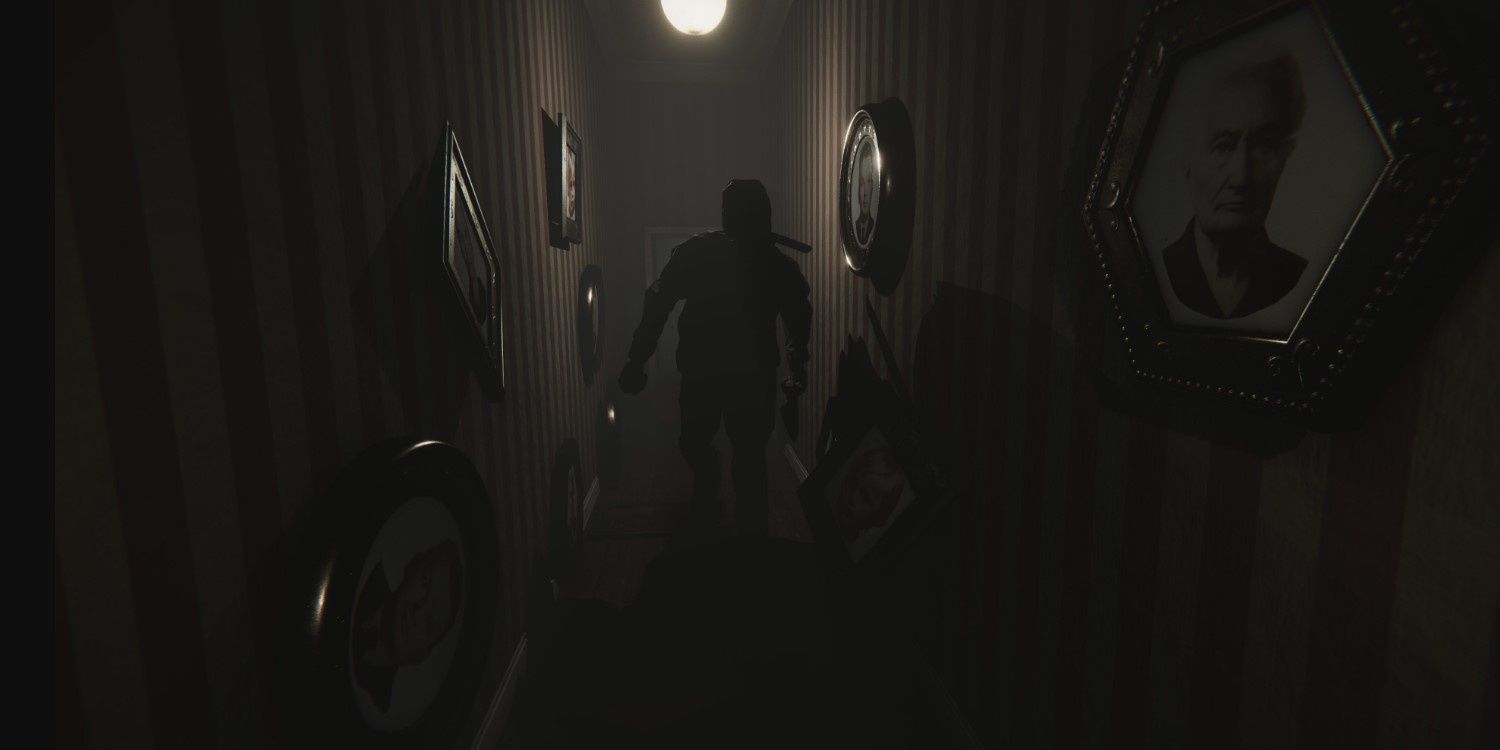 One of the more interesting elements of the cathedral section is the introduction of Hans Goring – an antagonistic spirit that will end you if he catches you. Whilst only in the game for a very short amount of time, Goring is the first dangerous encounter.

What makes him terrifying is how he sounds. You’ll know when he’s about due to the flickering of candlelights and a distinguished, elongated guttural howl. The moan intensifies as you get closer to where he is until it almost sounds like he’s growling in your ear. A short but horrifyingly sweet horror moment. 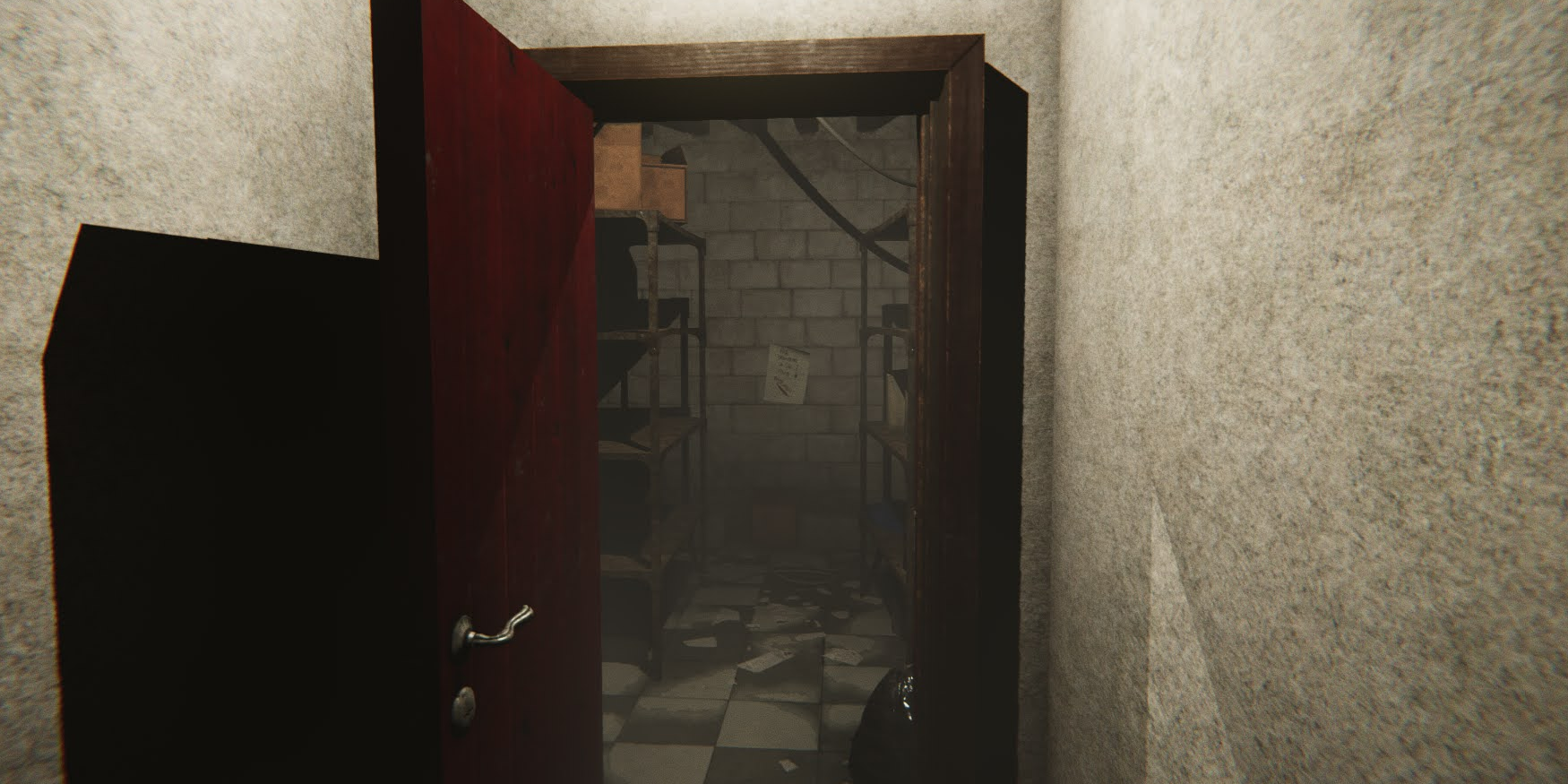 The basement is a whole nope-filled area. You’ll need to go down there to retrieve the crowbar. At first the basement looks normal, but you’ll quickly trigger a dizzyingly scary moment that involves Madison and a singular, dangling light.

Bizarrely, you must keep touching the light bulb to warp the environment until you discover the location of the crowbar. The edges of this warped basement are coated in darkness and the lighting design makes it tense enough to convince you Madison is lurking on the very edges of that darkness. Sure, you can snap away at the dark with the camera, but she’ll pop up when you least expect it. 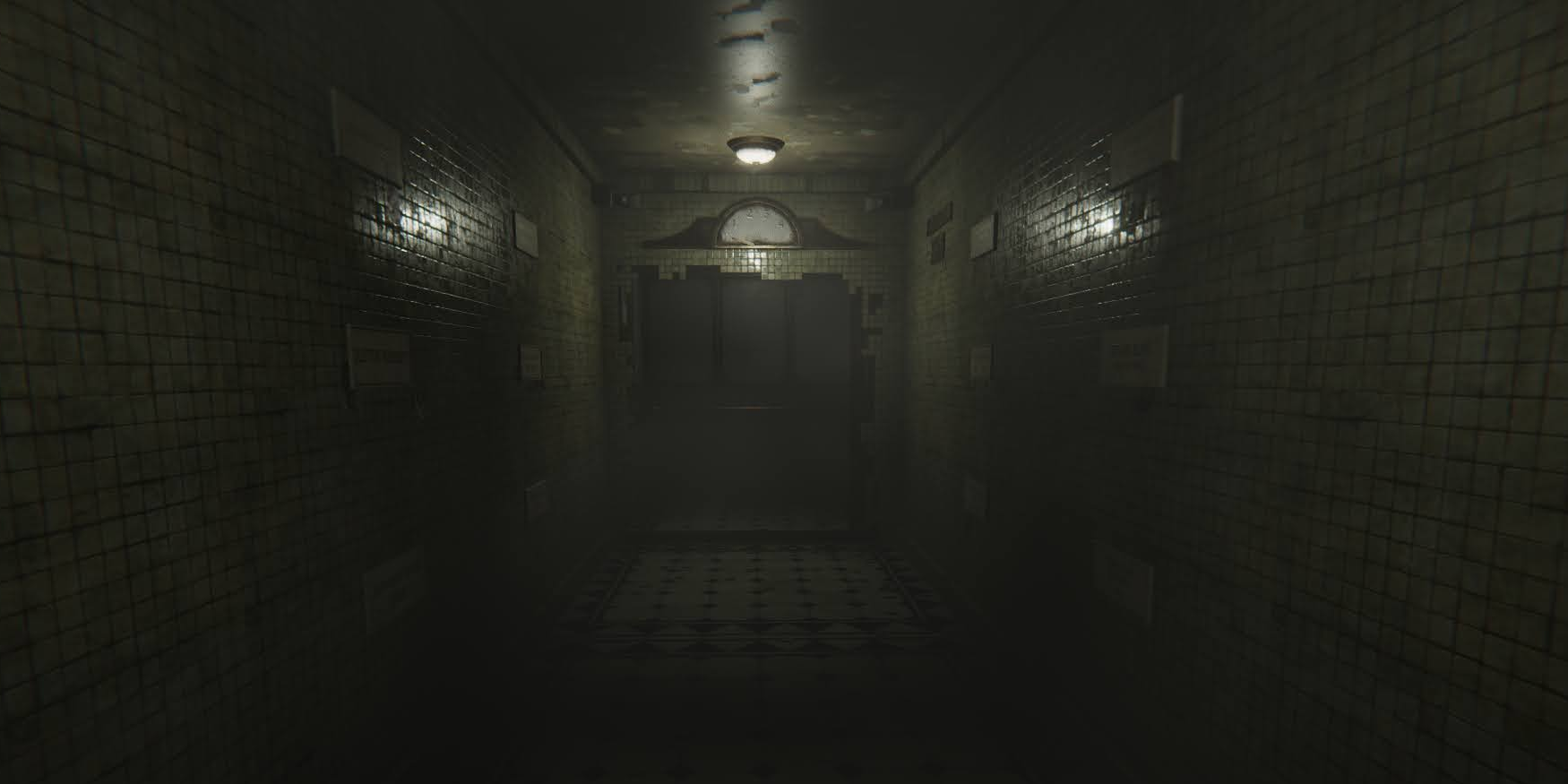 Not much is overtly revealed about Madison Hale’s true intentions. The information about her and her murders is sprinkled via newspaper clippings and the odd news report that crops up. This all changes when you enter the mausoleum where you’ll need to solve a puzzle that revolves around Madison’s twisted murders.

You’ll travel between five floors of a mausoleum while hearing a news report about each of Madison's victims. The gruesome details of the killings are well written and listening to it within an unnatural environment keeps the hairs pricked on your neck. This is made even scarier when Madison decides to join you in the lift at random moments. Bad Madison. 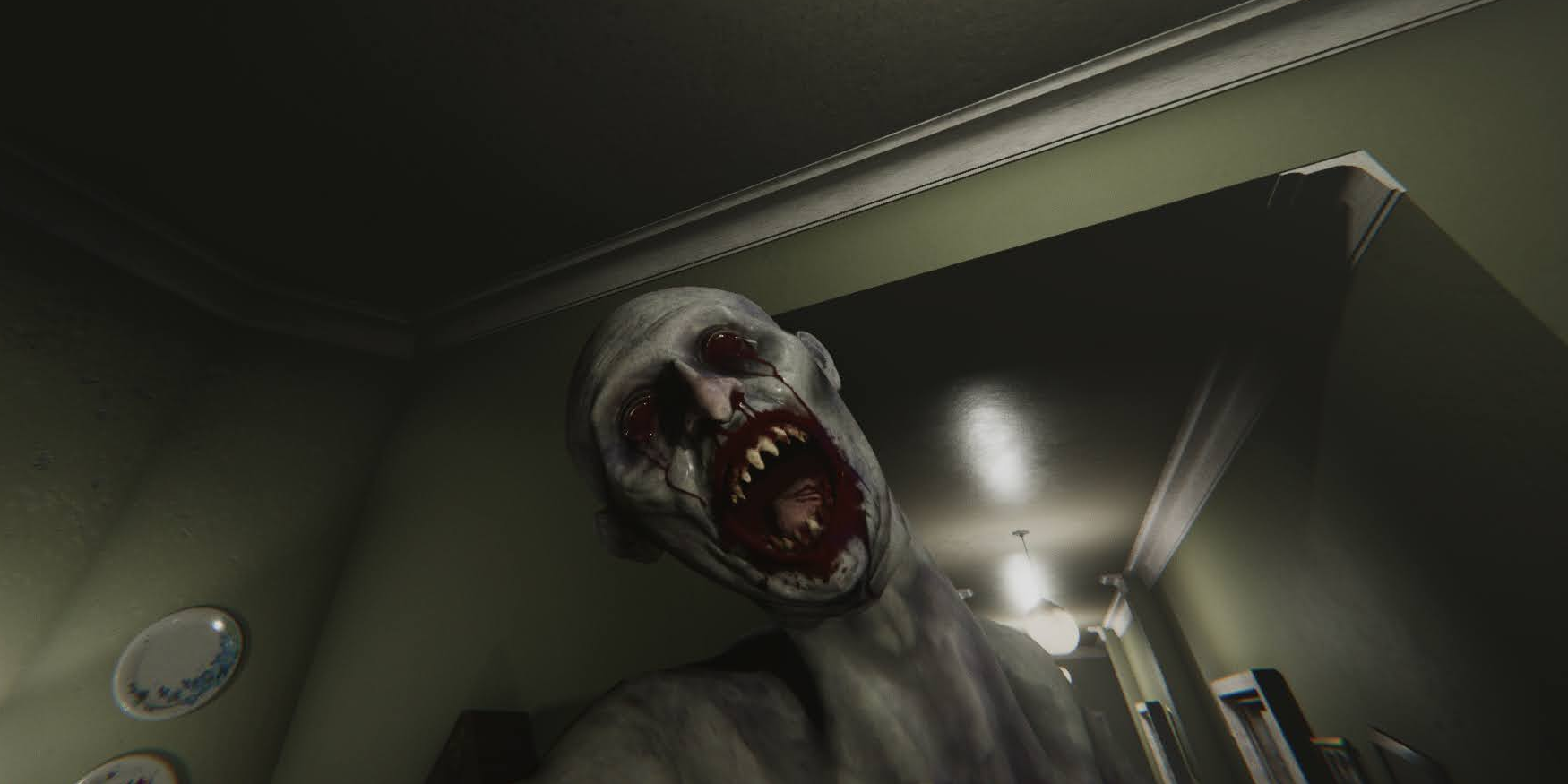 Throughout your morbid time exploring the Grandparent’s abode, you’ll start to discover minuscule information about an entity named Blue Knees. This seemingly real figure was responsible for the blindness of Luca’s Grandma but was dismissed as a hoax by her husband, Albert. But Blue Knees is real, and he wants his eyes back.

Encountering Blue Knees is a slice of gaming horror at its best and is the scariest moment of Madison. You’ll first catch sight of Blue Knees creepily peeking from around a corner. Bloody holes where its eyes should be, and a permanent smile stretched across its blue face. Then, you must run around an altered version of the house in search of gramophones that play one of the scariest songs ever put to gaming. This segment is wrought with terror as Blue Knees twitches at you with speed if it detects you. And that song, Blue Knees is behind, and he’ll find what he’s been looking for… will stay with you as you try to sleep at night.