When the COVID-19 pandemic hit the United States, educational institutions shifted so rapidly to remote learning that students and teachers were barely prepared: Some schools asked parents to use paper instructions and workbooks, while others loaned out Chromebooks for video classes and online assignments. As a fairly tech-savvy parent, I was saddened to see my daughter struggle with a thick plastic Dell laptop that couldn’t multitask as her teachers expected. But I wasn’t surprised that she was issued such a shoddy solution, since cash-strapped schools have spent decades struggling to buy affordable computers in bulk for hundreds of students.

MediaTek could change that. Over the last two years, the Taiwanese chipmaker has worked to emerge from the supply chain shadows as the “power” behind affordable smartphones, smart TVs, and computers. You might not know that Amazon’s latest sub-$100 Fire Tablets rely on MediaTek processors, as do products from HP, LG, Microsoft, and Sony, say nothing of Chinese giants Alibaba and Tencent. Similarly, if your cellular carrier is offering a self-branded Android phone, there’s a good chance it’s powered by MediaTek’s chips. This is a hungry company, aggressively hunting for business, mindshare, and a larger place in our daily lives.

To make up for the largely virtual nature of its 2020 Executive Summit, an event typically held in San Diego, California, MediaTek surprised online attendees by physically delivering a box of devices that use its chips: an Alexa-controlled color shifting LED lightbulb, a Google Assistant-ready smart wall power adapter, and most unexpectedly, a Lenovo IdeaPad Duet. The super-thin, largely metal-and-glass computer flew under the radar when it was released during the pandemic, but is pitched as a 10.1-inch, 1920 by 1200-pixel Chromebook tablet with magnetically detachable accessories — a keyboard/trackpad combo and rear stand — that transform it into a laptop.

Given the build quality, specs, and bundled items, Lenovo’s sub-$250 price tag initially amazed me, as that’s the same price as the Dell Chromebook laptop we returned to my daughter’s school as all but unusable. Yet when you consider that MediaTek processors are used in Amazon’s even less expensive tablets, the IdeaPad Duet isn’t so much “cheap” as a value proposition: Armed with power-efficient ARM chips, Lenovo wants to win over schools and families in need of affordable but premium-feeling solutions for remote learning. MediaTek and Lenovo are also firing broad shots at Apple’s iPad, which after 10 years still can’t be purchased with a comparable keyboard, trackpad, and stand for much under $450. 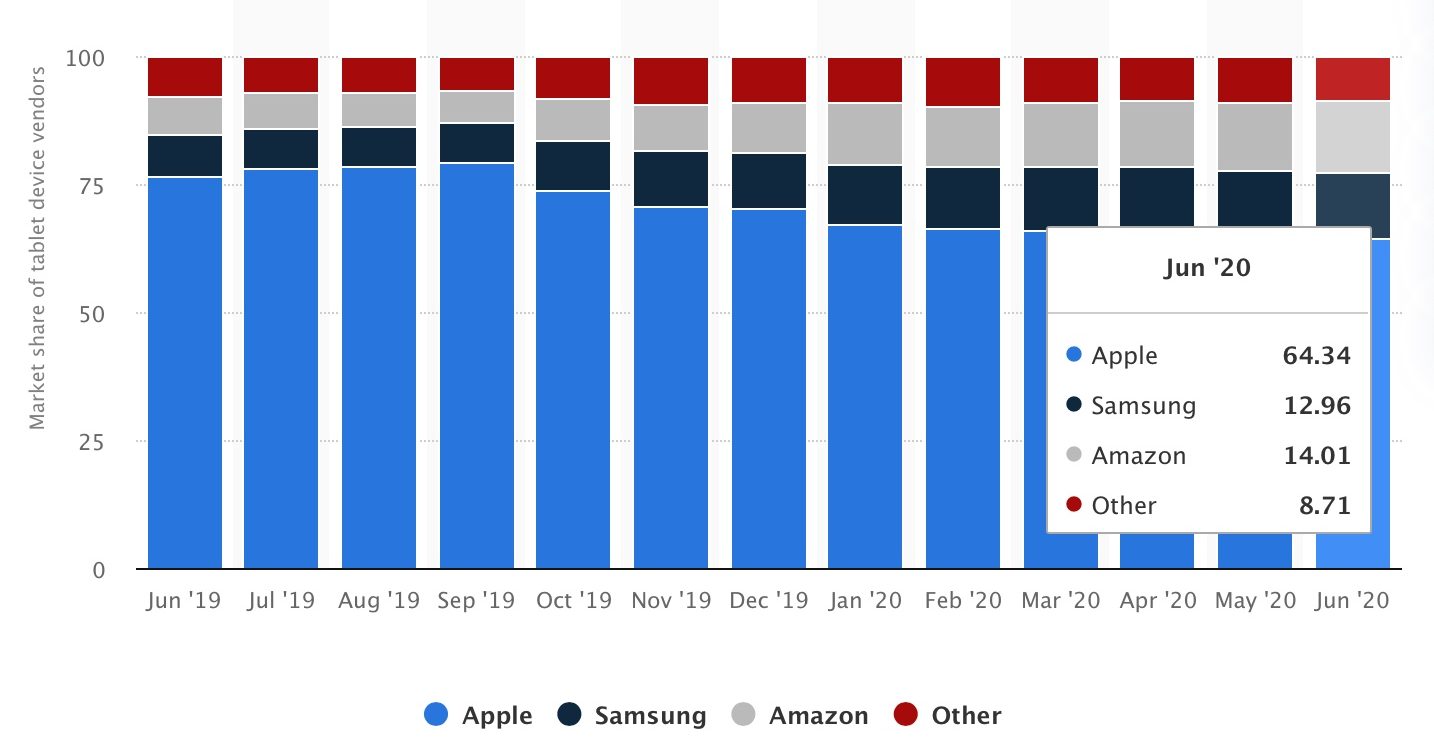 It’s important to be realistic about MediaTek’s chances against the iPad juggernaut. Recent U.S. tablet market estimates suggest Apple dominates with a 64% share, Amazon’s a distant number two at 14%, and Samsung is close behind Amazon with nearly 13%. (The numbers are similar but not identical internationally, where Huawei has a stronger presence.) By contrast, Lenovo is part of the “Other” category, where countless Android tablets collectively represent under 9% of total sales. Even if MediaTek chips powered everything in the Other category, Apple’s iPad sales would be over seven times higher, and if every Amazon tablet was factored in, Apple would still be around three times ahead. Apple’s tablet share isn’t as strong as it was a year ago, but it’s still multiples of MediaTek’s volumes.

Yet one word explains why MediaTek and its partners could grow their share at Apple’s expense: Commoditization. Previously distinctive features and finishes have become not only commonplace but affordable, such that the IdeaPad Duet’s metal, glass, and plastic body looks like it could have come from Apple, while its dual speakers, dual microphones, dual cameras, and magnetic attachment system are all as competent and remote school-ready as can be. The IdeaPad doesn’t feel like some cut-rate plastic laptop — in tablet form, it’s somewhere between a modern iPad and iPad mini, and even decked out with its magnetic stand and keyboard, it’s dimensionally smaller than a spiral notebook. Kids would love to carry something like this around. 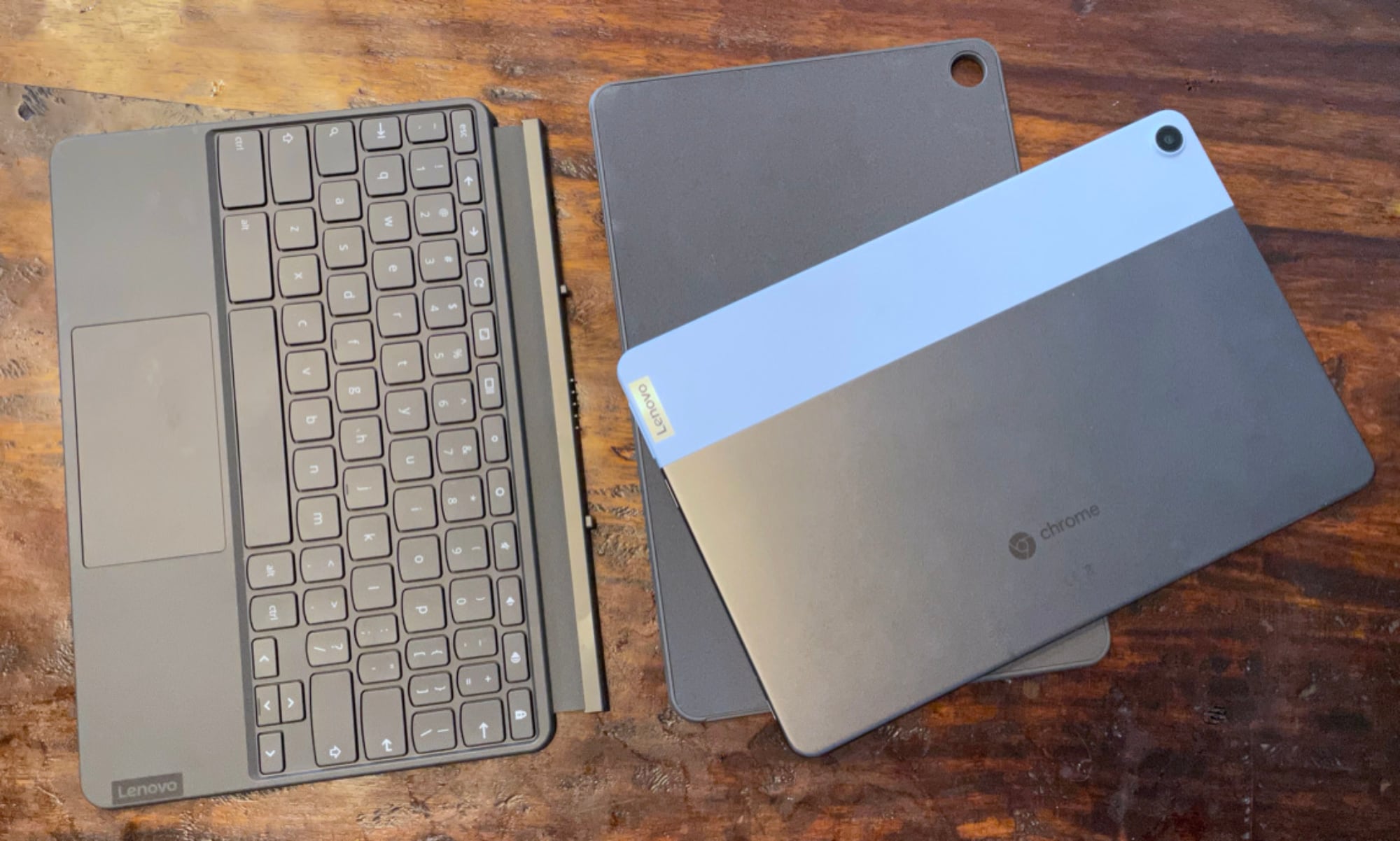 While a lot of that comes down to Lenovo’s industrial design and component selection, MediaTek’s chips make those choices possible. The IdeaPad Duet is powered by an eight-core, 2.0GHz CPU called the Helio P60T, including ARM’s Cortex-A53 and Cortex-A73 cores, a Mali-G72 GPU, and dedicated AI processing capabilities. MediaTek aimed the Helio P60T and its brethren directly at Qualcomm’s lineup of ARM-based Snapdragon processors for computers, which have largely focused on more expensive laptops than the IdeaPad Duet, and at Intel’s Celeron N4020, which powers budget laptops including Dell Chromebooks.

Judged strictly on specs, the IdeaPad Duet goes toe-to-toe with the current entry-level iPad, which includes a similar 10.2-inch screen, stereo speakers, twin cameras, and dual microphones. Apple has the edge with its A12 Bionic, a slightly higher (2160 by 1620) screen resolution, and Touch ID fingerprint sensor, while Lenovo offers twice the base storage capacity, a higher-resolution front-facing camera, and greater hardware versatility thanks to the bundled accessories. But there’s no comparison between the devices in OS or software capabilities: Lenovo’s Chrome OS device is fast, wakes from sleep super quickly, and functions really well by Chromebook standards, while the iPad can run a universe of iPadOS apps that have been optimized for component-level responsiveness, and takes five photos in the time Lenovo’s tablet takes to snap one. 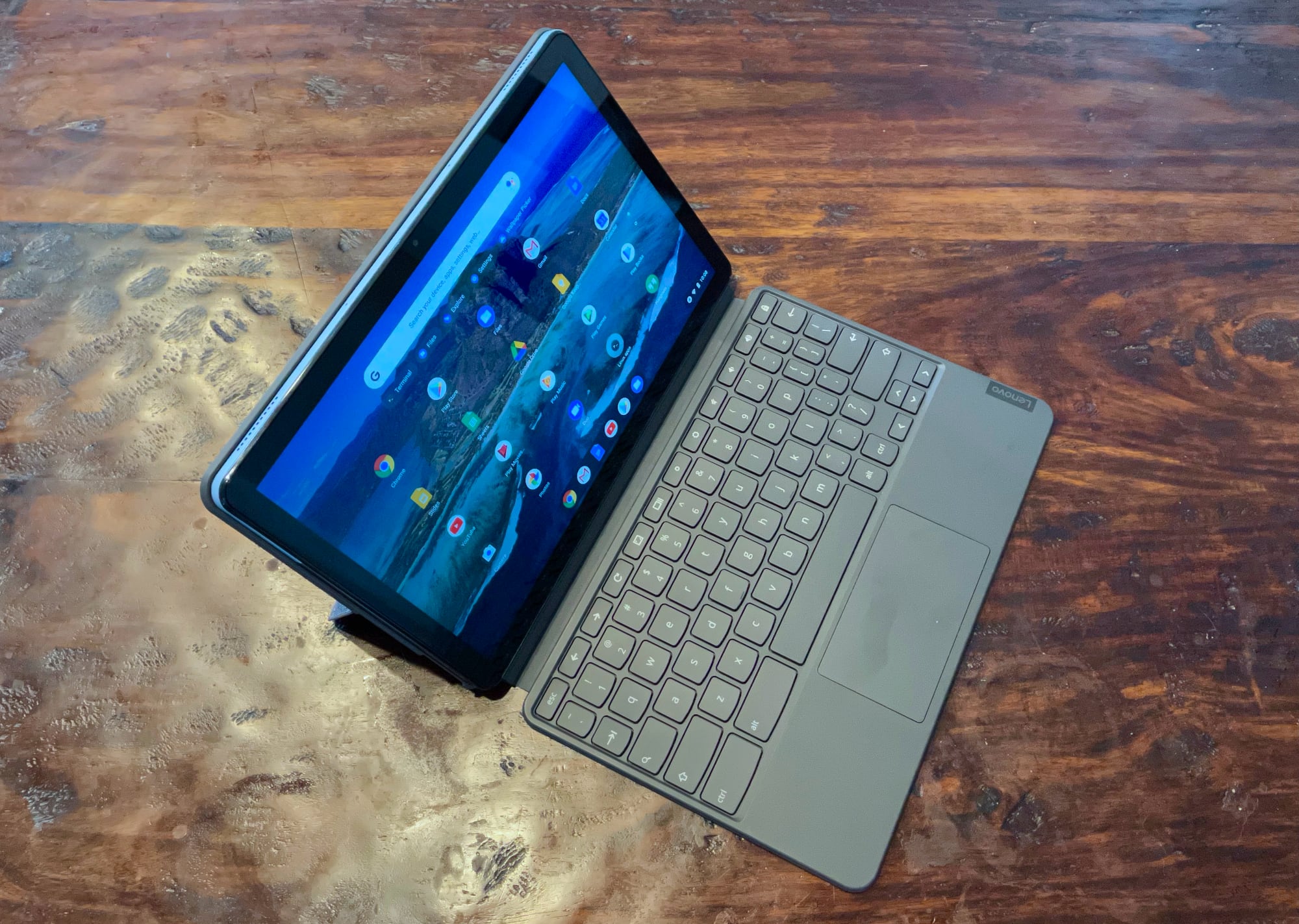 Above: Thanks to the commoditization of metal and glass tablet parts, the contrast between Lenovo’s $249 convertible Chromebook tablet and similarly priced educational laptops could hardly be sharper.

Unfortunately for Apple, teachers and administrators generally don’t view software limitations as a problem for school-issued computers: They’re far more concerned about getting kids access to Zoom chats, Google Classroom, and a Chrome browser than other apps that might distract them from coursework. And to the extent that there might otherwise be a decision-making stalemate for schools, Lenovo certainly wins on price. The IdeaPad Duet sells for under $250 with 64GB, substantially less than the 32GB iPad ($329 standard, $299 education), and includes around $150 of genuinely useful accessories in the box — an iPad user’s least expensive option is Logitech’s $150 Combo Touch.

In other words, there’s a roughly $200 difference between a really nice Chromebook that delivers what schools want, and a similarly-equipped iPad that does all that and more. Apple’s challenge going forward will be either to convince schools and parents that the “and more” features are worth a premium over commodity alternatives, or to start offering convertible tablets at more affordable prices. Historically, the company has stuck to the former strategy when pitching K-12 institutions, and repeatedly lost ground to rival platforms as a consequence.

MediaTek was wise to let its virtual event attendees get hands-on time with the IdeaPad Duet, because actually holding and using this device demonstrates that budget convertible tablet/laptops are now much better than just “good enough.” The table stakes for educational tablet build quality, size, speed, and convenience have evolved to the point where schools and students alike will be glad to toss old plastic laptops in the recycling bin.

It’s clear at this point that hybrid tablet makers have all the technology and components they need to build next-generation computers for education, and that the pandemic has amply demonstrated the need and demand for these solutions. My only questions are how fast schools will be ready to shed their laptops after seeing what convertible tablet-laptop options can offer, and whether they’ll embrace affordable MediaTek-powered machines at the expense of alternatives from Intel, Qualcomm, and Apple.