Right after their previous match, G2 and Suning jump right back into the Rift to fight for first. 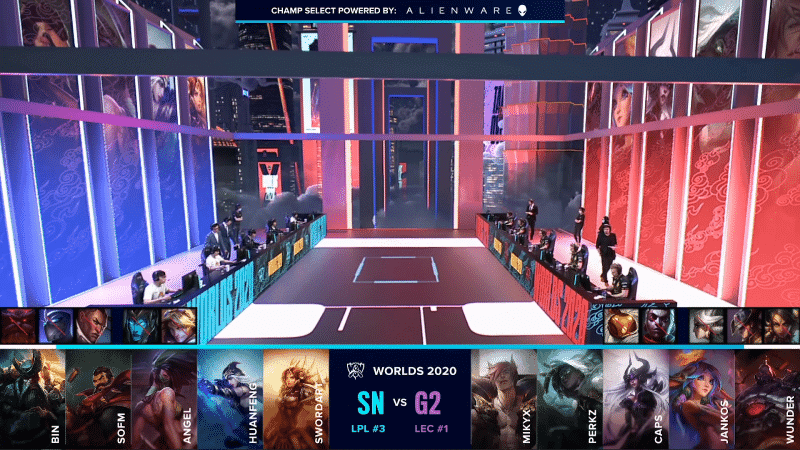 After going 1-1 in the Group Stage, G2 and SN go head-to-head again to decide first place out of groups. SN could have easily gone 2-0 against G2 in the Group Stage, despite a clutch comeback from G2 in the late game. G2 is able to pick up the first blood, making up for a slight misplay at level one which saw Perkz lose his flash. SN did manage to claim a kill as sofM entered the fight. The game began to slow down slightly at the 13th minute, despite a one-for-one trade in the bottom river, both teams have moved to focus on CS and tower pressure. At that point, SN had a 1k lead.

A fight did start at the Rift Herald, however, as SN claimed the Herald and claimed two kills in return as G2 picked up just the one. The Rift Herald instantly goes top side as Caps also falls as SN breaks the game wide open. G2 just about managed to find the big counterplay after Caps was taken down in the mid lane. While they end up going two-for-two in the long fight, some good outplay sees them keep themselves alive in the game, taking a second drake for their trouble. Though just like that G2 again lost Caps as SN moved to quickly claim the Baron buff, catching G2 out after they reset after the drake. SN again picked up vital kills onto G2 members and picked up yet another Baron buff as G2 looked to have run out of options.

Suning rise to the top spot

SN looked to end the game after sofM was taken down outside the base, SN took down Caps and Mikyx early but G2 managed to hold on despite losing a number of members and having their base opened. G2 is able to get Soul point, with SN looking to end it before then. SN took an uncontested third Baron, with G2 again looking like they were playing around a possible soul. SN denied the soul point, however, they lost two members as a result and while they have a 5k lead, it has no impact now as we go deep into the late game.

The fight happens, both teams trade two-for-two early as the low health bars meant everyone pulls away. G2 kept their mid laner alive, however, meaning they have the more deadly 3v3. SN is able to pick up the fourth Baron of the game with G2 taking the drake soul but SN caught them out of position and SN managed to take them down. One massive barrel combo for Bin and he downed three members of G2 in one hit. The LPL third takes down the LEC first seed as they go top of Group A.