UK based esports organisation LDN UTD has partnered with the Mayor of London Sadiq Khan and events venue Samsung KX to host an esports and gaming showcase.

All Access Gaming, set to take place on November 13th, will focus on health and wellbeing within the sectors through the use of grassroots gaming. As such, LDN UTD will host a FIFA 22 and F1 community stream on Twitch at Samsung KX in King’s Cross, London. 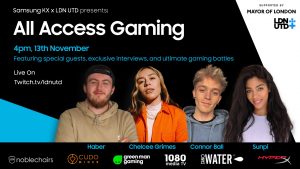 According to the release, the showcase will feature educational content that includes special guests. Moreover, fans who attended the event in person will have access to LDN UTD talent as well as health and wellbeing advice. To access the event fans must register on Samsung KX’s website.

All Access Gaming will feature a range of guests including songwriter Chelcee Grimes, the Vamps’ Connor Ball, and R&B artist Jords. Content creators RiaBish, Sunpi, ItsHaber, Itani and Kirbz are also expected to be involved in the event.

LDN UTD CEO, Oliver Weingarten, commented: “This event will showcase both the beneficial aspects of mental and physical activity in esports, and the role tech can play in supporting this. I can think of no better partners than the Mayor of London, Samsung KX and the inspirational talent who’ll be attending, to help us get this crucial message out.”

Via LDN UTD’s Twitch stream, fans will be able to ‘interactively participate’ and win prizes courtesy of Green Man Gaming and noblechairs.

Ashrita Seshadri, Head of Marketing, Samsung KX added: “We’re really excited to be supporting All Access Gaming in partnership with LDN UTD and the Mayor of London at Samsung KX.

“As a hub for innovation, we showcase how to use technology as a force for good and we’re proud to bring together a gaming community of like-minded people to showcase and educate the benefits of health and wellbeing within esports. This is another one of our great skill-sharing events to help Londoners and beyond improve their skills and nurture their passions.”

This isn’t the first time that LDN UTD has partnered with the Mayor of London. Last year, Khan joined forces with the esports organisation for an initiative aimed at tackling youth unemployment in the capital.

Esports Insider says: LDN UTD’s latest event looks to tackle a much-needed topic within the esports industry. Partnering with the Mayor of London should provide mainstream attention, meanwhile, Samsung KX’s 20,000-square-foot facility should be an ideal venue for the event.